At an emergency IOC Executive Board meeting in Switzerland, the day after an independent report detailed a systematic and state-run doping programme in Russia, members fell short of an immediate ban but they did issue a series of measures relating to the report.

“With regard to the participation of Russian athletes in the Olympic Games Rio 2016, the IOC will carefully evaluate the IP Report,” a statement said.

“It will explore the legal options with regard to a collective ban of all Russian athletes for the Olympic Games 2016 versus the right to individual justice.

It added that the committee would have to take into consideration the Court of Arbitration for Sport (CAS) decision, due on Thursday, concerning the IAAF rules, as well as the World Anti-Doping Code and the Olympic Charter.

CAS is due to rule on the dispute between Russia, 68 of its athletes and the governing body of world athletics over their Rio participation after the IAAF banned the country from the Rio track and field programme.

The report, commissioned by WADA and compiled by Canadian lawyer Richard McLaren, on Monday revealed evidence of widespread state-sponsored doping by Russian sports men and women and extensive cover-ups, particularly in the 2014 Winter Olympic Games in the Russian city of Sochi.

Positive tests were covered up and “dirty” urine samples swapped with “clean” ones with methods developed by the domestic intelligence service (FSB), while deputy sports minister Yuri Nagornykh decided which athletes would be protected.

The IOC said on Tuesday it had started disciplinary action against officials mentioned in the report and that anyone implicated would not be given accreditation for Rio.

Given the report’s details of extensive cover-ups of positive tests in Sochi, the IOC has ordered the immediate re-testing of all Russian athletes who took part, as well as a full enquiry.

It also instructed all international Winter Olympic Winter Sports Federations to freeze their preparations for major events in Russia. It said it would not back the European Games, scheduled for the country in 2019.

Russian President Vladimir Putin had said on Monday that any government officials identified in the report would be temporarily suspended.

Nagornykh was suspended on Monday after the report’s publication.

Mutko said his own suspension was not being discussed and that no allegations had been made against him. Kremlin spokesman Dmitry Peskov said Mutko had not been named in the WADA report as being directly involved in the cover-ups. 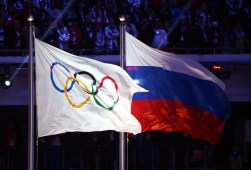 “My suspension is not being considered – it is a matter for the president and prime minister to decide,” R-Sport quoted Mutko as saying.

“There were no accusations made against me and there cannot be because it is absolutely unrealistic and impossible.”