He took the yellow jersey off the shoulders of BMC’s Greg Van Avermaet on Stage 8, which featured no less than four very difficult climbs.

Overnight the field ventured into Andorra, tackling some of the steepest Pyrenean mountains and getting their ‘climbing legs’ ready for the Alps that are yet to come.

When watching these leg-burning stages one thing is quite clear; the fans are wild. They are passionate, excited and at times borderline mad. Take the legendary Didi Senft, better known as Didi The Devil or El Diablo, as an example.

The 64-year old German has followed Grand cycling tours since I was a wee lad. Every stage he dresses in a devil outfit and jumps up and down as the riders pass. He’s known in the peloton and you’re always going to spot him on television. He epitomises a dedication and enthusiasm to the race that many can only dream of having.

It’s quite a spectacle to watch the cyclists ride up these climbs, cutting through the sea of people cheering them on like a hot knife through butter. It’s what creates the atmosphere that is so unique to this race.

Amidst the borat mankinis, onesies and flag draped superheros, there are a few unruly fans that get a little too close for comfort. It was certainly the case on Saturday evening when Chris Froome, while riding in the peloton, reacted to an eager Colombian fan by elbowing him in the face.

The UCI deemed his reaction as ‘incorrect behaviour’ and fined the Brit 200 Swiss Francs ($286.72 AUD to be precise). A rather paltry sum, but a fine nonetheless.

Looking back over this illustrious race, there are more than a few Cyclist vs Fan incidents that come to mind. Cast your minds back to 2011 when Spaniard Alberto Contador was taunted by a fan dressed as a surgeon, holding a blood bag. Some found it funny, some ironic, others just simply wrong.

Contador obviously wasn’t happy and he clipped the fan square in the chin with a well timed right jab. Fair play, some would say. Contador would later be banned for using the banned substance clenbuterol. The image in the history books forever.

In 1975 the fortunes were reversed when, in perhaps the most well-known incident involving a cyclist and a fan, a spectator punched Eddy Merckx causing the Belgian to lose precious time overall. Merckx later claimed the incident cost him the overall race.

Winding the clock even further back and we enter the era when the race was contested by country – not by team. There are remarkable stories of unruly fans during those times attacking riders because of their nationality. The French fans hated just about every rider that wasn’t French and so it was made significantly harder for non-French riders to win the race.

All of this is truly amazing, but perhaps the most incredible story – and just outright zany – took place in 1911. Frenchman Gustave Garrigou was falsely accused of poisoning his countryman Paul Duboc, who miraculously managed to finish the stage three hours behind the race leaders after he was found in middle of the road convulsing.

Fittingly the race was about to go through Daboc’s hometown. Many Daboc supporters threatened Garrigou and warned him not to enter, but luckily for Garrigou, Daboc believed he was innocent. Daboc offered to enter the town first to calm the angry fans. Sensing that wouldn’t work, Garrigou refused and instead opted to wear a fake moustache, a new pair of cycling goggles and a different jersey. 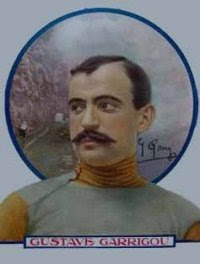 Incredibly the disguise worked. Garrigou travelled through the town safely without being harmed and the fans, who were thirsty for violence, turned on each other.

This story is just one example of the colourful history that this race has. Nothing like what happened in 1911 would happen today, but there will always be heart-in-the-mouth moments where enthusiastic fans appear to get that little too close.

The accessibility to the riders and the stage is what makes the Tour de France the spectacle it is, and inevitably the line will be crossed by both riders and fans. We can only hope that this fine balance remains even in years to come.

Stay tuned for more race updates from Chris throughout July.