The Etixx-Quick Step rider, who had a disappointing start to the Tour and missed last year’s race following a virus, held off the late charge of Bryan Coquard (Direct Energie), beating the Frenchman by less than a tyre’s length. 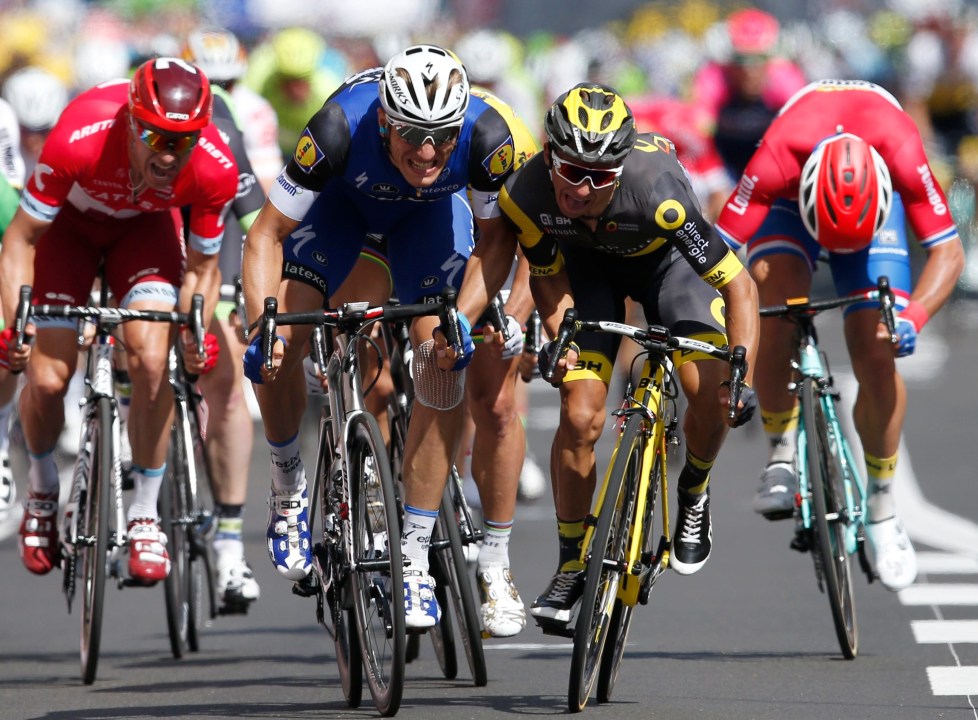 Marcel Kittel and Bryan Coquard sprint for the win during the 4th stage of the Tour de France. Photo: KIM LUDBROOK, EPA.

Slovak Peter Sagan (Tinkoff) was third and retained the overall leader’s yellow jersey at the end of the fourth stage, at 237.5km the longest in this year’s race.

Frenchman Julian Alaphillipe (Etixx-Quick Step) is in second place, 12 seconds off the pace, with a decent chance of claiming yellow in tonight’s fifth stage, a 216km trek in the Massif Central mountains.

“There is a lot of emotion. I had to fight to come back, I had a tough start to the season but the goal has always been the Tour de France,” said Kittel.

“The plan was to take the yellow jersey after the first stage but that did not go as expected.”

Kittel suffered a virus that plagued his 2015 season and his Giant-Alpecin team omitted him from the Tour roster, prompting the 28-year-old to sign for Etixx-Quick Step who were looking for a replacement for the departing Mark Cavendish.

Kittel failed to beat Mark Cavendish in the massive sprint in the opening stage last Saturday, and came home a mediocre seventh on Monday, which suggested he was struggling for form.

On Tuesday, the German was perfectly led out by his team and, although the final straight was slightly uphill, he never looked back, raising his arms to celebrate a few minutes after crossing the line as he and Coquard waited for the photo finish.

“It’s a very, very important day in my career, to show that I’m back. The team had so much pressure in the last three days,” said Kittel. “It feels like an achievement.”

Cavendish, looking for a 29th Tour career stage win, was boxed in when the sprint started and could only finish eighth, surrendering the lead to Sagan in the points classification.