Almost four years after he crossed the finish line in the men’s 50km walk in London behind Russian drug cheat Sergey Kirdyapkin, Tallent was presented with his gold medal at a ceremony in Melbourne.

He finished second in the 50km walk at the 2012 London Olympics but gets the gold after the post-Games doping ban of Kirdyapkin, who stripped of his medal by the Court of Arbitration for Sport in March, elevating Tallent from his silver medal position.

The 31-year-old from Ballarat also won a silver and bronze medal at the Beijing Olympics.

Tallent said he felt lucky to receive his gold as other athletes who had been beaten by those who doped might not be so lucky.

“To be the first gold medal awarded in Melbourne since the Olympics here is extra special,” he said.

“It’s a victory for clean sport and justice has been served.”

Tallent has become only the seventh Australian male to win an athletics gold medal.

He said getting the medal before competing in Rio, where he would now be reigning Olympic champions, would provide extra motivation.

As well as the medal, Tallent received a medal as a member of the Order of Australia. 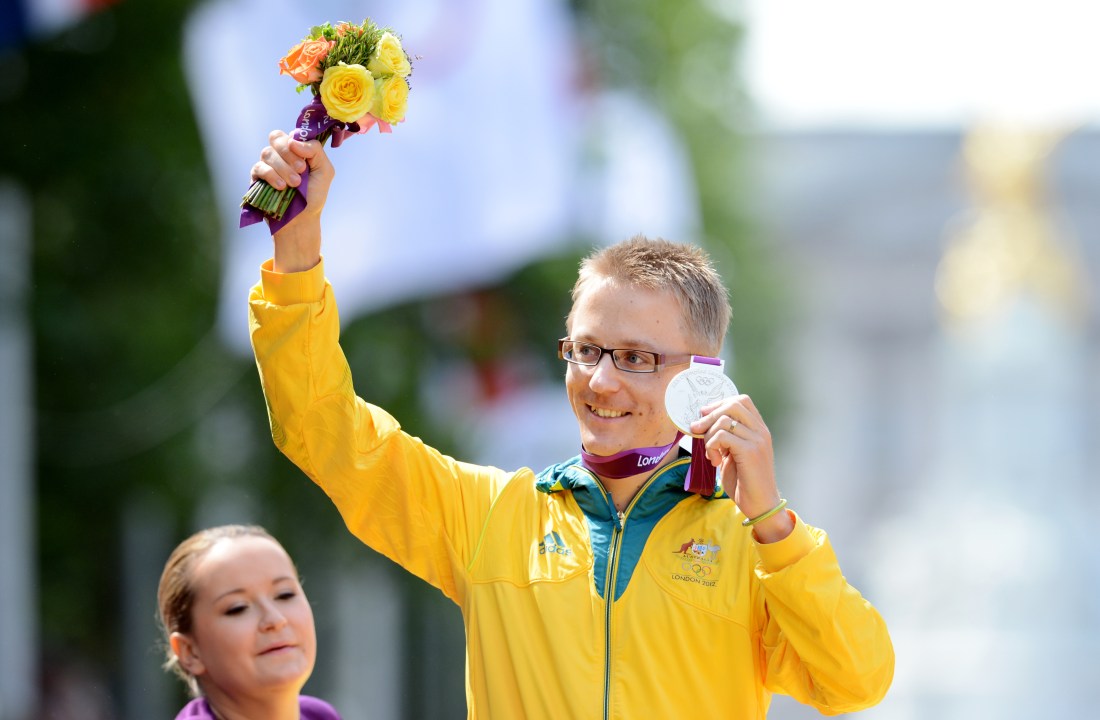 Coates said in his speech that “presenting an Olympic medal is always an honour, but more so on this occasion to be part of rectifying, in some way, the massive injustice perpetrated on Jared by a doping cheat and aided by a Russian Anti-Doping Agency and Russian Athletics Federation that were rotten to the core”.

Tallent’s medal ceremony comes just before the International Association of Athletics Federations rules tomorrow whether Russian competitors will be allowed to compete in the Rio Olympics in August.

Coates said Kirdyapkin was one of six Russian athletes sanctioned for anti-doping rule violations by the Russian Anti-Doping Authority.

“Kirdyapkin was … unable to scientifically rebut the conclusion of three independent experts, based on irregularities observed in his biological passport, that he had doped,” Coates said.

“A cheating athlete – but wait for the sting.

“When the disciplinary committee of the Russian Anti-Doping Authority declared Kirdyapkin ineligible for a total period of three years and two months, they commenced the sanction after the London Olympics.

“Not an issue. Also not an issue that they disqualified his competitive results to coincide with the periods when his blood samples were taken (August 2009 to August 2012), or almost.

“And here’s where they were playing games with us.

“They conveniently excluded two periods when Kirdyapkin had been competing and concluded the period during which his competitive results were disqualified … some six weeks before the London Olympics.

“Kirdyapkin’s London Olympic result would have been allowed to stand, and we would not have been here today, had the International Athletics Federation not successfully appealed against him and five other Russian athletes who had received similar favourable treatment.”

The Court of Arbitration for Sport ordered in March this year that all competitive results obtained by Kirdyapkin between August 2009 and October 2012 be disqualified, after a World Anti-Doping Agency investigation last year found widespread state-sponsored doping in Russia.