And several experienced heads hope they never see a V8 Supercars event like it again.

Sunday’s Clipsal 500 was staggering from first lap – when several teams didn’t know the race had even started – to last, when hometown Holden driver Nick Percat was crowned champ.

Confusion reigned around the Adelaide street circuit, which was baked all weekend by scorching conditions but lashed with 15mm of rain during the two hours of racing yesterday.

The rain caused the pain.

The controlled start under safety car conditions, the aquaplaning through gigantic puddles, fuel drop dramas, crashes and an unprecedented race suspension all came down to the storms.

The reaction to the wild weather had team bosses up in arms, who will now take their grievances to race officials. 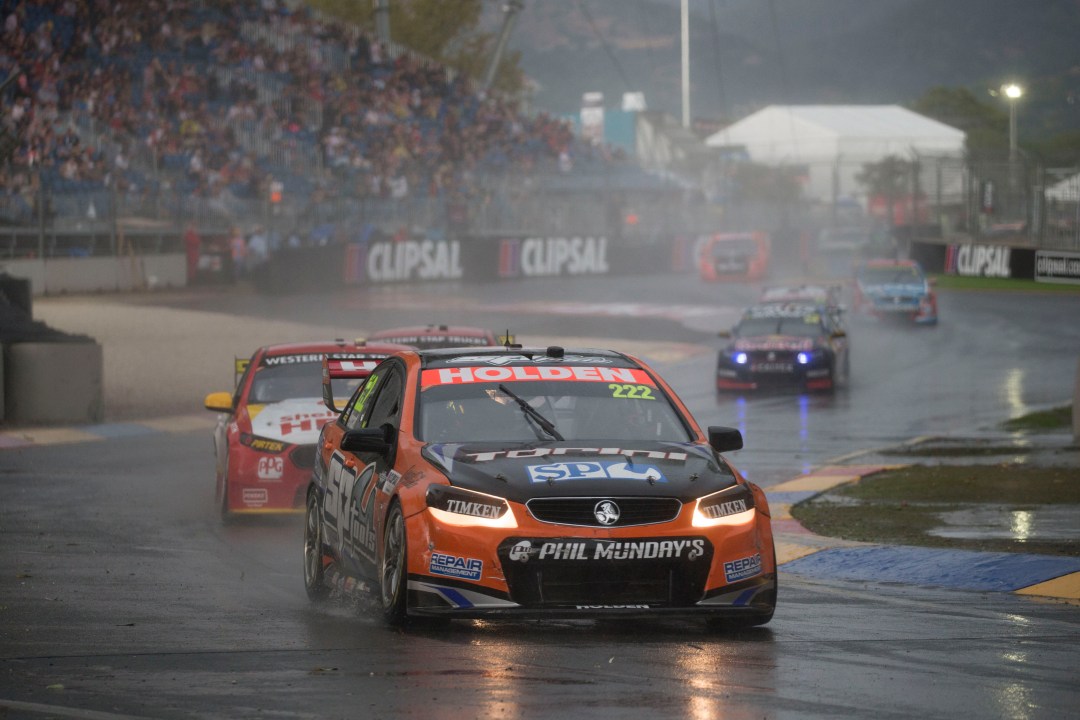 Prodrive Racing boss Tim Edwards was taken aback by some of the rulings and the lack of information flow.

“I couldn’t figure out what was going on and I don’t think anyone else up and down the pit lane could so I feel sorry for the poor public sitting at home,” he said.

The biggest confusion came at the start, when teams, drivers, broadcasters and fans were all unaware the race had started.

Edwards called that a “whoopsy in the rule book” and Red Bull Racing team principal Roland Dane said it cruelled the race.

“Most of us read the start of the race didn’t happen until the safety car comes in [to the pits], the stewards decided on a different interpretation so that created an unfair situation,” he said.

“I can accept it once. But when these things happen we have to acknowledge it and put it right.”

The mandatory fuel drop rules – introduced to ensure drivers pit at least twice – created drama when the 78-lap race was reduced to less than 50.

Leading drivers were forced to pit to add fuel they didn’t need to avoid penalties.

Second and third-place getters Fabian Coulthard and Scott Pye didn’t do so, and were stripped of their podium places.

Dane said there was an obvious solution.

“It was entertaining, but the minimum fuel drop just created chaos,” he said.

“As one of the officials said, if it’s declared a wet race, you just drop the rule.”

Edwards said there was one great upside to the opening meet of the season.

“It was a spectacle. The public sure would have been entertained – but confused, like we were,” he said.