Queensland Rugby League (QRL) boss Peter Betros backed Wayne Bennett’s impassioned plea for players to take more responsibility on the drink rather than outlaw alcohol in the wake of a nightmare week for the NRL.

Days after Mitchell Pearce apologised for his Australia Day bender, Valentine Holmes and Cameron Munster copped 12-month bans from the QRL for breaking curfew at the weekend Emerging Origin camp in Brisbane.

Holmes was dumped from Cronulla’s Auckland Nines squad when it emerged he was also being investigated by the NRL integrity unit after being fined for public nuisance and obstructing police on Sunday morning.

Betros said they would not ban alcohol at future Emerging Origin get-togethers or the senior Queensland camp despite the disappointing weekend behaviour.

“You would expect a player to behave at a certain standard – that’s all we ask.

“If they are not prepared to do that, then they are out of our system.”

Betros was aware of the News Corp Australia report that another eight players might have broken curfew but considered the QRL investigation into the weekend closed.

“We have no knowledge of any other players breaking curfew,” he said.

“We have done all we can do… we are not happy about it but we have done it and are getting on with life.

“Saying 10 players broke curfew, I have no idea where that information could have come from.

“All the players have been spoken to so we have no knowledge of any others.”

Betros agreed with Bennett who told reporters yesterday that player education – not alcohol bans – would avoid more black days for the game.

“What are we going to do? Lock them up and then, all of a sudden, let them out for one night – then they will go absolutely crazy.

“It’s all part of education, getting them to that point where they will be responsible.”

Still, Bennett believed he could see improvement in players’ attitudes toward alcohol despite another rough week for the NRL.

“From a rugby league point of view, we are getting better,” he said.

“They don’t drink anywhere near as much what they used to.

“But when they do get on it, there’s this mindset that it has to be all the way or no way … or binge drinking. 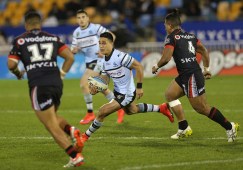 “That’s when they do the stupid things.

“Our challenge is to try and teach them to drink in moderation, not for them not to have a drink.

“It’s about being able to be strong enough with yourself to say ‘I have had six or seven and that is enough for me tonight’.”