Sporting icon Dawn Fraser has told tennis star Nick Kyrgios to “go back to where his parents came from” following his stormy exit from Wimbledon.

Asked to comment on Kyrgios’ antics during his fourth-round grand-slam loss Fraser accused him of “tanking” and setting a poor example for “the younger generations of this country.”

“If they don’t like it they can go back to where their fathers, or their parents came from. We don’t need them here in this country to act like that,” Fraser told the Nine Network on Tuesday morning.

Born in Canberra, 20-year-old Kyrgios is the son of a Greek-born father and Malaysian-born mother.

He was booed on court during his loss to Frenchman Richard Gasquet after he appeared to deliberately fail to return serves during the third game of the second set.

Fraser has been blasted on social media for the controversial comments, including from Kyrgios.

Kyrgios, who denied tanking, responded via social media, posting a link to Fraser’s tirade on Facebook.

“I have no comments on Dawn Frasers nasty racist attack…but she is out of line. #unaustralianbehaviour,” she posted. 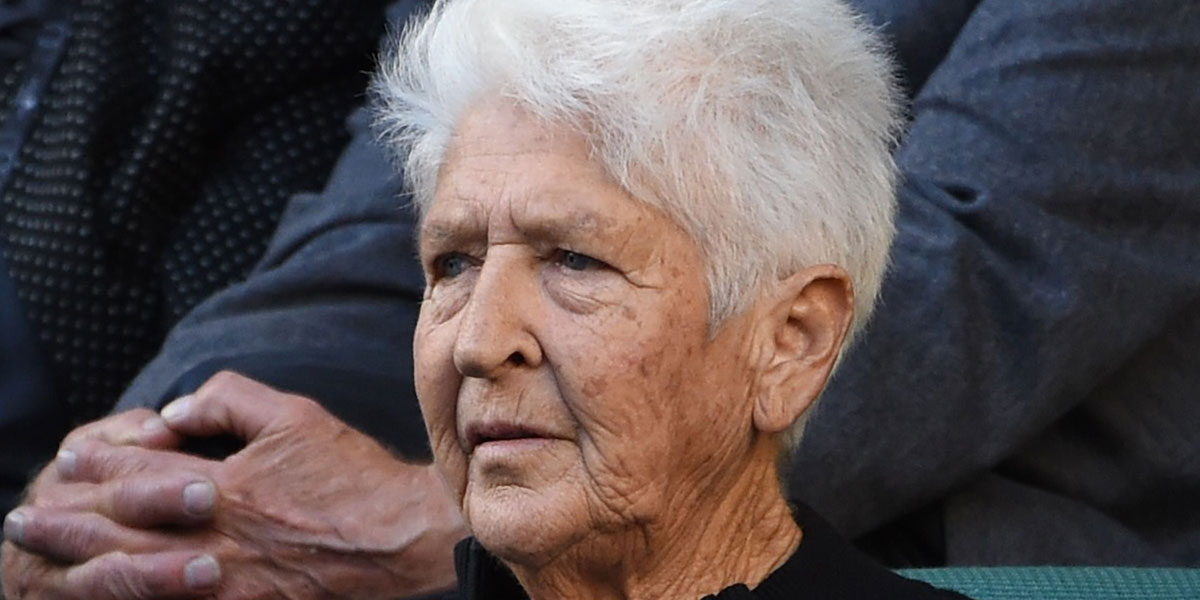 Earlier, admitting to feeling the strain of “external” pressures, Kyrgios clearly made no effort to return serve in the third game of the second set in his rollercoaster 7-5 6-1 6-7 (7-9) 7-6 (8-6) fourth-round loss to classy Frenchman Richard Gasquet on Monday.

The tennis enigma let serves pass and nonchalantly dumped others in the net, prompting a jeers and boos from disgruntled spectators at the All England Club’s Show Court 2.

Kyrgios could be fined up to $US20,000 under grand slam “best effort” rules, but fended off accusations he stopped trying during an intense post-match press conference.

“There was a lot of ups and downs. It was a tough, tough time, especially when he’s not missing any balls.

“I’m getting frustrated myself. I feel as if I’m playing not how I should be playing. I’m angry at myself.”

Kyrgios also claimed Gasquet “was serving too good”, an explanation not accepted by British journalists who grilled the Australian so relentlessly an official mediator had to intervene.

Despite dropping the second set in 24 minutes, Kyrgios showed grit to take the third and hold two set points in the fourth-set tiebreaker.

But lightning didn’t strike twice on the very same court that Kyrgios saved a grand slam-record nine match points and recovered from two sets down last year to conquer Gasquet en route to the quarter-finals.

Kyrgios coughed up his 10th double-fault on set point, then netted a backhand, before Gasquet prevailed after two hours and 54 minutes, ending Australia’s singles participation for another year.

“You never want to go out of a grand slam. I feel like I definitely could have done better.”

The 20-year-old entered Monday’s encounter with hopes of even winning the title after taking out world No.8 Milos Raonic with a scintillating third-round display.

His march to the last 16, following last year’s heroics and another quarter-final charge at the Australian Open, had tennis greats Mats Wilander, John McEnroe and John Newcombe agreeing it would be crazy to write the young sensation off.

But in a largely forgettable performance, Kyrgios fought with his players’ box, received another code violation for swearing and cursed himself as “so dumb, so dumb” before finally crashing out.

Despite playing some sublime tennis to reach the last 16, Kyrgios’s tournament has been laced with controversy with much of the focus centred on his on-court conduct after a series of clashes with umpires and officials.

The boom youngster said he felt misunderstood and was also dealing with personal issues.

It all took its toll.

“There’s a lot of things going on at the moment that aren’t focusing on actual tennis. There’s just a lot of stuff going on,” he said.

He chided himself throughout Monday’s encounter, but also vented on his courtside box.

“Thanks, you guys, thanks. I asked for one thing. One thing,” he said, pointing to his support staff.

Kyrgios then received a code violation and could be heard telling someone in the crowd to “just leave”.

His manager John Morris, now also coaching the firebrand after he split with Todd Larkham on the eve of the championships, did just that midway through the second set.

At one point, Kyrgios sought a hug from a ball boy and it seemed to help as he rallied to take the third set, staving off two match points in the process.

He let out a mighty roar in celebration as Gasquet obliterated his racquet to earn his own code violation.

But it was the Frenchman who held his nerve best as tensions rose to book a quarter-final shot at fourth-seeded French Open champion Stan Wawrinka on Wednesday.