Not content with knocking heavyweights Brazil out of the Women’s World Cup, the Matildas are eyeing a place in the last four after their historic triumph in Canada.

Kyah Simon’s 80th-minute goal on Monday morning (AEST) earned Australia a quarter-final berth in the biggest shock of the tournament.

The final whistle in Moncton announced Australia’s first knock-out win from any senior team at a World Cup and brought wild celebrations from the Matildas.

Coach Alen Stajcic said it was a deserved result.

“Exhilarating is the word for such a victory against a big powerful football nation.

“The effort, the execution, the spirit has just been brilliant.

“A lot of sacrifice in the last five months and I guess it pays off on days like this.”

After an afternoon labouring in cold and damp conditions, two substitutes began and finished the decisive goal.

Katrina Gorry’s fine pass released captain Lisa De Vanna on the right, whose shot was fumbled by Brazilian keeper Luciana into the path of Simon.

Running from well downfield past her marker, Simon sidefooted a volley into the open net to give Australia their first tournament win over Brazil.

It was Simon’s moment, and her third goal of the tournament, but Australia had plenty of strong performers, notably Elise Kellond-Knight in midfield and wide players Sam Kerr and Caitlin Foord. 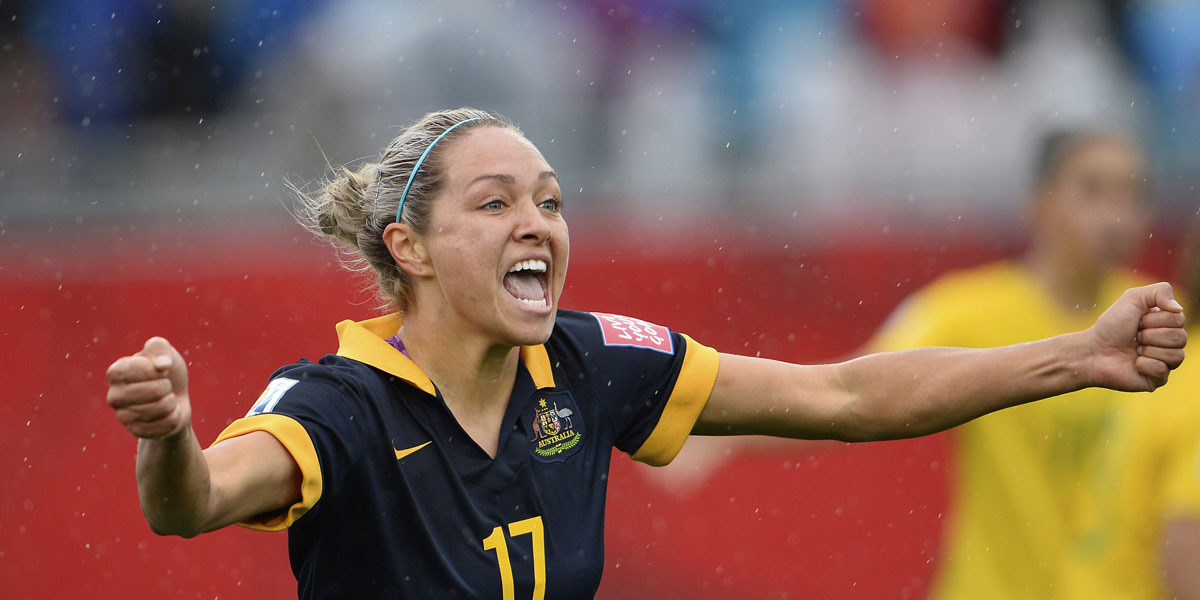 The win returns the Matildas to the last eight of the World Cup for the third straight time and the first with a knockout win after the expansion of the Women’s World Cup in 2015.

Australia will return to Edmonton for a quarter-final on Sunday morning (AEST), which could be a rematch of the past two Asian Cup finals against reigning world champions Japan.

The Japanese play the Netherlands on Wednesday (AEST) for the right to play Australia, as the Matildas bid to reach the semi-finals for the first time.

Stajcic said his side would cause problems against any team given their options in attack.

“We’ve come through three really tough battles and now you can make that four.

“With such a young team, we’ve seen so much growth and development in such a short space of time.

“If they keep growing, we can beat anyone in the world.”

A tactical first half against Brazil was devoid of major chances.

Full-backs Foord and Steph Catley produced lively attacking play, although the Matildas had their fair share of ragged moments.

With the half-hour mark looming, Formiga dispossessed van Egmond, and forced Matildas goalkeeper Lydia Williams to make a superb save from her swirling long-range strike.

After the halftime break, the rain came down and the match opened up.

The Matildas had a major life on 63 minutes when the unmarked Formiga headed into the post with the rain teeming down.

De Vanna scurried the ball down the other end, teeing up van Egmond, who shot wide.

By 72 minutes, both Gorry and Simon were on the field and, less than 10 minutes later, they made their impact on the break.

After holding out a largely flat Brazilian attack, the Matildas had their slice of Australian footballing history.