Resort-style living is up for grabs in Toorak Gardens – so long as you have around $3 million to play with.

The magnificent home at 23 Ormond Grove is owned by Kevin and Nina Timoney.

The couple own several local businesses including Executive Boards Australia, pubs including the Kent Town Hotel and Bombay Bicycle Club and their new venture, a commercial solar company called SOLPPA.

However, now heading towards semi-retirement, Kevin says he and Nina are keen to make a lifestyle change and downsize.

They have bought an apartment on South Terrace that is still being built. In the meantime, they plan to spend the Australian winter in the US where they own property in Florida.

“We have had so much enjoyment from our beautiful home, sharing many wonderful times with our family,” Kevin says of their Toorak Gardens home. 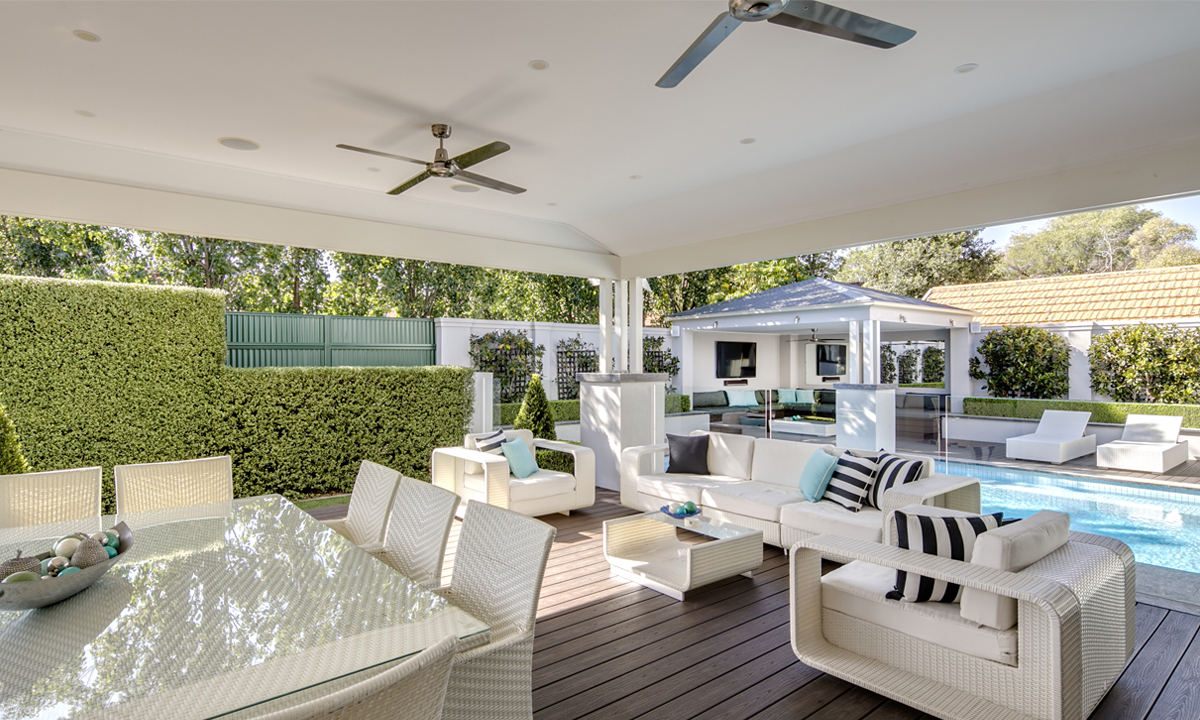 The four-bedroom home sits on an almost 1000 square metre block. An extension had been done when the family moved into the home in 2008, however they have since added an award-winning ensuite by Bathrooms by Urban, a huge new designer kitchen by Walls Brothers Designer Kitchens, butler’s pantry with study nook, and the star of the show – a resort-style backyard by Glorious Gardens, part of the Galvin Group.

Kevin says they are emotional about leaving the place they’ve called home for the past 11 years, but it’s time for a change.

“We love the place,” he says. “It’s a huge resort-style backyard and we have done a lot of entertaining. But it’s time for another family to enjoy it now.”

The home is being handled by Klemich Real Estate agent Matt Smith and inspection is by appointment only. Offers close on May 16 at 12.30pm.

While most couples downsize as they head into retirement, John and Eileen Vincenzi built their generous dream home in Springfield.

That was back in 1986 and the Vincenzi family has since had decades of happy times in the grand Delamere Avenue residence.

Sadly, however, with John and Eileen both passing away in the past 12 months, their children have decided to put the home on the market for the first time.

It’s an emotional time, says Lee-ann Vincenzi, as her parents’ dream home stands as a symbol of their years of hard work and achievement.

It also stands as a reminder of her father’s Italian heritage – from the grand columns to the marble tiles and ornate cornices.

“That house was everything they always wanted,” Lee-ann says. “It was them to the max: the Carrara marble, the fancy etched glass, the domed entrance hall and huge chandelier.

“They loved entertaining and would often have neighbours and friends over on Christmas Eve and mum would be behind the bar in the bar room and dad would be master of ceremonies.” 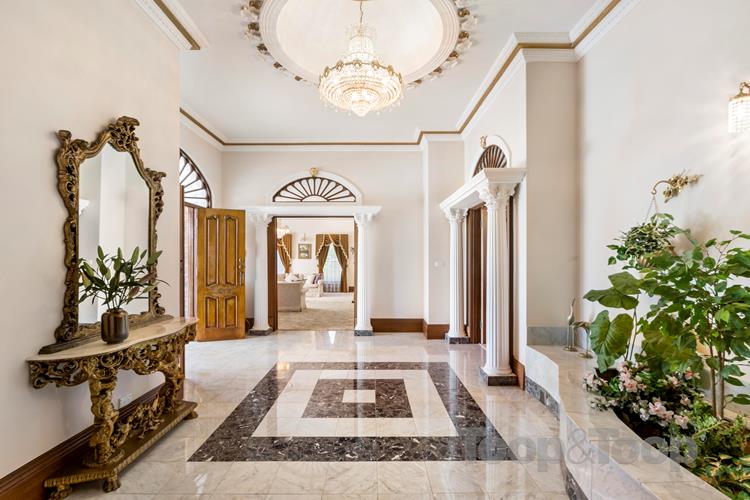 Lee-ann says her father arrived in Australia as a 19-year-old from Italy in 1949 with just five pounds, while her mother was from a poor Irish family in Queensland. They met in Adelaide at the Dreamland Ballroom in the 1950s, had four children and worked day and night to provide for them. Back in the early days, John undertook various jobs, including as a milkman and at Holdens, but the couple was very entrepreneurial and eventually ran the-then Waverley Hotel in Unley and the German Arms Hotel in Hahndorf.

Eventually they were in a position to retire and realise their dream of building a new home for the family.

“Mum and dad were very strongly family-orientated,” Lee-ann explains. “The house was for our family and was a central point where we always gathered. There were lots of pool parties and Easter egg hunts and Christmas celebrations. Mum had a Christmas wreath on the front door that was about a metre wide.”

The grand residence features formal dining and lounge rooms, plus casual lounge room, and another family room along with an eat-in kitchen. The property also has a half-size tennis court, plus generous garage and workshop.

Lee-ann says structurally the house is still in great condition, including the intricate woodwork, but she adds that new owners may want to update the colour scheme.

“It needs a family and to be filled with lots of activity and laughter and living. Mum and dad would want that,” she says.

Zahra and Michael Moffa sure do love a house project – they have just renovated their eleventh home and put it on the market.

Zahra takes charge of the interior design of the homes while Michael project manages the renovation process.

Their latest transformation is a circa 1950s home in Payneham South which Zahra says had great street appeal and stand out art deco features when they took it on.

They demolished the 1970s extension and created a contemporary open plan renovation with an industrial feel.

Interior design highlights of the four-bedroom home are the exposed internal red brick in the bathroom and laundry, the black ceiling beams in the living area and polished concrete floors.

“We had to knock through the bathroom to create the central hallway – that was probably the biggest challenge with this house,” Zahra says. “Other than that it was pretty straightforward.

“We had planned to be here for two years but we’ve actually been here three years because I’m really attached to this place. It has such a lovely, homely feel and a great northerly aspect with beautiful light.”

Another great feature of the home is the standalone studio in the back yard, which the couple, who has two young children, have turned into another living area complete with lounge and dining spaces and pizza oven. 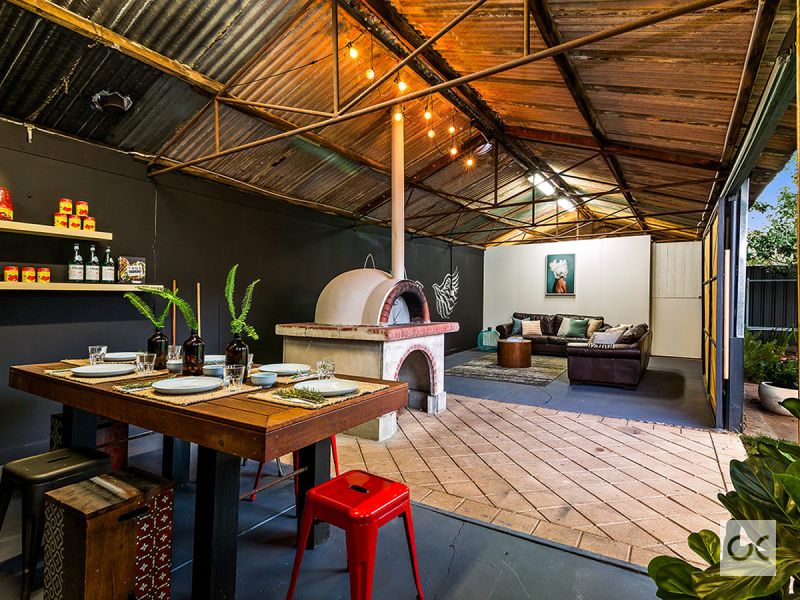 The backyard studio with pizza oven.

“We see the potential of each home and enjoy redesigning and reconfiguring to expose the best features,” says Zahra.

When the couple is not working on house projects, they run their boutique business Sooki on the Norwood Parade. Zahra says she and Michael plan to take a break from home renovation for now, before getting stuck into house reno number 12.

The property is being handled by Ouwens Casserly Real Estate agents Alistair Loudon and Lincoln Marshall and offers close on May 21 at 12pm.

From next week, Premium SAHOMES will move to the new SALIFE website.

Every Friday, we will be delivering all your favourites SALIFE stories direct to your inbox, with behind-the-scenes exclusives and essential tips for how to spend your weekend.

In addition to our glossy monthly print magazine, the free SALIFE email will include the fashion, recipes, garden and interior design features and that readers have come to expect, along with stories of fascinating South Australian people and places. 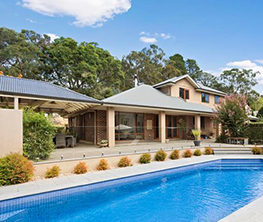 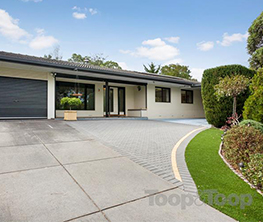 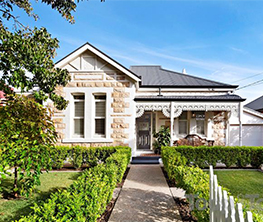 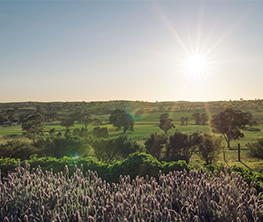