In a revealing exchange on Pickstar’s Off-Field podcast, Turtur describes Armstrong’s impact on the race as “phenomenal”, insisting the American’s subsequent doping confessions – which saw him stripped of his seven Tour de France titles – have had “no effect” on the Adelaide race.

“It had no effect on the race because he raced here legally,” he told the podcast, hosted by Rooster Radio’s Andrew Montesi and James Begley.

“Everyone’s an expert after the fact – and we can talk about all the bullshit that’s happened since – but the fact of life is when he raced here, he had a legal licence, he could race anywhere in the world and he wasn’t found guilty of nothing… [and] if you look at what his presence did here, it was phenomenal.”

Turtur said “the smallest increase” in attendance across all the TDU’s events in Armstrong’s first year, 2009, was “100 per cent”.

“The BUPA Challenge tour went from [around] 4000 to 8000 competitors, the Legends’ Night dinner went from 700 to 2100… we had the LA Times, the big papers from New York and all over the US and right through bloody Europe – everyone was here.

“It was huge – and we’ve not lost any benefit from that to this day.”

He said it was not just spectators and media but other marquee riders – “Armstrong got ‘em off their arse and they came, and once they came, they kept coming back”.

“We thought after Armstrong didn’t come [back] after the third year, we’d get a 20 per cent drop – and we got an increase,” he said.

“And then [you get] these dickheads that suggested he pay back the fee that we paid him.”

It’s not clear to whom Turtur is referring, but Premier Jay Weatherill is one prominent figure who has suggested Armstrong should return his TDU fees.

“Many South Australians will feel deceived by him [and] I’d be more than happy for Mr Armstrong to make repayment of monies to us,” Weatherill said in 2013, a year after Armstrong was outed as a drugs cheat.

A spokesman for the Premier today said he still stood by that view.

The Government has long claimed commercial confidentiality precluded it from revealing Armstrong’s Adelaide appearance fee, but a Cycling Independent Reform Commission report commissioned by the International Cycling Union (UCI) and published in 2015 confirmed a $1 million appearance fee was paid to the cyclist’s Livestrong charity each year from 2009 to 2011.

Tourism Minister Leon Bignell noted at the time the reported $1 million annual figure was “not too far” from the mark, although both NewsCorp and Fairfax have speculated of payments as high as $9 million – a figure that Turtur ridicules.

“I don’t know what drugs these journalists are on, and I don’t know where they get the numbers but it’s absolutely preposterous to bloody suggest that we paid $9 million – what a fuckin’ joke,” he told the podcast.

“But the fee that we paid Armstrong – if you look at that from a return [point of view], that was the deal of the century, for what it got us – that’s a fact.”

He said Armstrong’s fall from grace on “the reputation of the race had no effect”, although he conceded it had “a big impact” on cycling as a whole.

“It made the sport react the way it did,” he said.

But he believes the reaction from outside the sport has been out of proportion.

“Cycling’s been the whipping boy for world sport forever,” he said, citing baseball and gridiron as codes far more lax on doping infringements.

“This is the hypocrisy of it all – we’re a soft touch and the media will go after cycling with no comeback, but if they go after other sports with the same vigour, they get their legs cut off.” 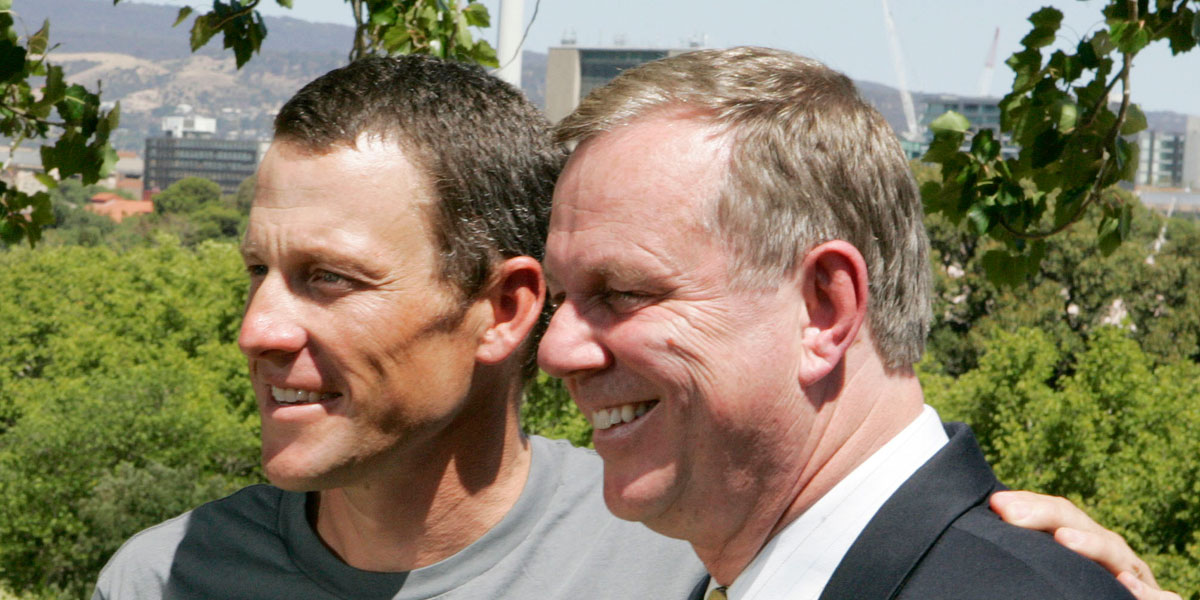 Lance Armstrong (left) at Montefiore Hill with then Premier Mike Rann before the 2009 Tour Down Under.

He did, however, concede Armstrong was not the one-in-100-year athlete he believed him to be.

“At the time, I was one of the great believers too,” he said.

“I thought he was something special – the cancer, the mind, the physiology – combine it all and you’ve got this 100-year athlete…

Turtur said he initially received an email at home confirming Armstrong’s presence at the 2009 race, after he had sounded him out through his manager for his comeback to world cycling.

“I read the email and I thought: ‘Fuck’, because I knew how significant it would be,” he said.

In the interview, Turtur also opened up about some behind the scenes fracas, including his run-in with a visiting “Belgian champion”.

“We had this circuit race in Glenelg and he was a bit of a superstar – or he thought he was – a bit of a rock star… he goes poncing around Glenelg and gets lapped about 10 times, he’s 10 stone overweight… waving at the girls, all that bullshit, bouncing around like a ponce,” Turtur recalled.

“I called him over and said: ‘You’re a fucking disgrace, to wear that jersey – the same jersey as [Belgian champion] Eddy Merckx!’

According to Turtur, the same rider left the first stage early the following day, without telling teammates, putting the team at risk of losing their sponsorship if he had been summoned for a random drug test.

He was on a plane the next day.

Turtur said the TDU emerged from the loss of the Adelaide Grand Prix, when the then-Olsen Government made “the best decision for Adelaide in the history of events” – not to replace the car race with a single showcase, instead investing in a range of events.

“All of those events returned a bigger benefit than the Grand Prix ever did, for a fraction of the cost,” he said.

And in so doing, the TDU helped transform the cycling culture of the city.

“We had a survey done a month before first race and the awareness factor [of cycling] was 2 per cent, or something… we were really crapping ourselves,” he said.

“But once we did the inaugural event, Olsen came up to me on stage three and sort of leaned over and whispered in my ear and said ‘we’re going to do this again aren’t we?’”