Rob Chapman, who is also a member of the Premier’s economic development cabinet committee, has told an Adelaide podcast a culture of critique is damaging South Australia’s ability to sell itself to the world, warning as far as most of the world is concerned: “We’re not even on the radar.”

“The mindset does have to change,” he told Rooster Radio, a podcast interview with local businessmen Andrew Montesi and James Begley, a former player at the Adelaide Crows, which Chapman also chairs.

Chapman bemoaned that SA is “over-critiqued”, arguing “the vocal minority gets more weighting attributed to it than it deserves”.

“I’m one for debate and discussion, don’t get me wrong – I’m very democratic and consultative in my style of leadership, but we’ve got to make decisions,” he said.

“If we don’t make decisions and we continue to procrastinate, nothing will happen.”

But he wasn’t averse to making his own critiques of SA’s governance, saying it was the role of businessmen such as himself to “influence Government to come up with the right policies and then get out of the way”.

“Because businesses create jobs – it’s not Governments, quite frankly – but they need to set the right policies, and I think they’re doing an adequate job at that,” he said.

“I hate using the words ‘Nanny State’ [but] some of the pissant little bylaws we’ve got about not being able to stand up and have a bloody drink on the footpath… [it] really pisses me off, because it sends a message to the world.”

An independent review of the state’s liquor licensing laws is set to report recommendations to the Government by the end of June.

But despite railing against heavy-handed government, Chapman nonetheless advocated strongly for contracts to favour local businesses, saying: “It annoys me when we get the right policy and we do a lot of talk, but we don’t back our own people in this state.”

“If I see another Government contract go to the eastern seaboard instead of to a person or company that could do the job equally as well here, I’m going to get really annoyed – and I’m going to call it out,” Chapman said.

In a wide-ranging chat, he surmised that SA needed “the burning platform” – an urgency derived from dire circumstances, because “we do get a bit comfortable and complacent”.

The former Bank SA director said the state needed to collectively divest itself of its State Bank trauma, saying: “I’m well over it.”

“I get annoyed when people do keep bringing it up because we’ve got to move on, and confidence is the best indicator of future prosperity,” he said.

Chapman’s Investment Attraction Agency has been charged with bringing in 6000 new jobs, as part of a broader strategy to market the state overseas.

“We’ve got to sell SA, for a start,” he explained.

“At the moment, we’re not even in the consideration phase – no-one knows where we are… we’re not even on the radar so we’ve got to do a better job at selling the state, and then make a value-proposition or compelling reason why they should relocate here.

“And I tell you, there are compelling reasons why you would.” 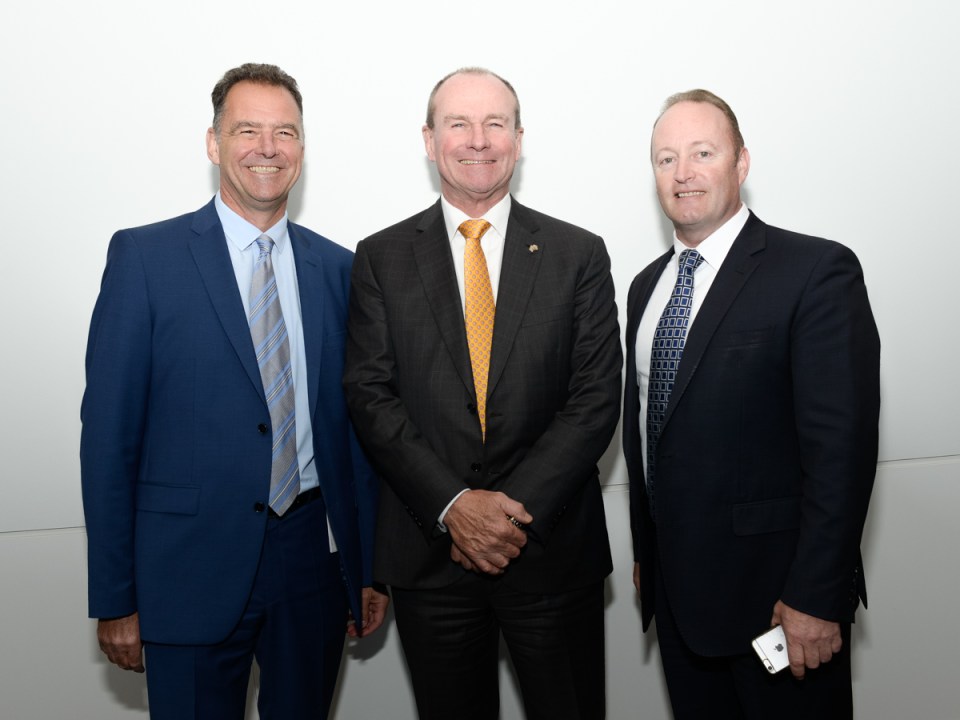 Chapman argues that “for the first time, we’ve got a vision for the state”.

“People bemoan ‘where’s the leadership in the state?’ [but] sometimes when the leader puts up his hand and has an opinion, mate – bang – off with the head… tall poppy syndrome’s alive and well in South Australia,” he said.

“If people drive a nice car in New York they stop you in the street and say ‘Mate, how’d you get that?’ [but] over here they rub a 20 cent piece down the side [because] you shouldn’t have that much money”.

Asked whether he had designs on a latter-day political career, Chapman said: “I’ve been asked and I’ve said let me just think about that – no!”

“I want to go down to the BMH (hotel) in my shorts and T-shirt and have a beer with my mates without a minder out the front.”