Some things never change in the irony-clad corridors of Town Hall.

The city council invariably says buzzy things about attracting more people, more business, more “vibrancy” to the city, but when push comes to shove – and elections loom – its behaviour often works against its rhetoric.

I’ll get to the current council’s opposition to park lands road closures shortly – a decision last night that would have killed off the upcoming Harvest Rock Music Festival, if not for the State Government’s impending intervention.

But to understand the full cognitive dissonance in Town Hall, we need to step back a few years to the halcyon days of the Haese administration.

In 2015, new Lord Mayor Martin Haese – a businessman and retailer by profession – was annoyed.

He was irritated by the Royal Croquet Club attracting thousands of people to the recently revamped Victoria Square at the alleged expense of “bricks and mortar” businesses and, also, by the way, damaging the grass; in fact, he didn’t understand why the previous council had wanted to “activate” the public squares at all; and he was very disappointed the then Weatherill Government planned to increase the size of Rundle Park by 3000 square metres.

That last point of contention remains a largely forgotten episode in the bizarre history of council decisions. And it’s one that has come back to bite the city this year.

The Weatherill Government was then in the design phase for the O-Bahn tunnel, with the project led by Transport and Infrastructure Minister Stephen Mullighan.

It produced numerous plans – due to the inevitable pushback from every ‘stakeholder’ in town – but the boldest was a proposal to close Rundle Road and create a huge new events space in an expanded Rundle Park.

The park already hosted the Garden of Unearthly Delights and the idea was to turn the multiple lanes of Rundle Road – a freeway-sized avenue that leads inexplicably to a relatively quiet Kent Town street – into park lands.

The move would bridge Rundle and Rymill parks, creating an expanse of park lands perfect for events, right next to the East End hospitality precinct.

Everybody, as it turned out, with Haese’s council leading the charge.

The key reason for the opposition was loss of on-street car parks. (It was a complicated saga, but residents and park lands advocates were also up in arms because the plan would have essentially re-routed Rundle Road through Rymill Park, with room for a predicted tram corridor. Read my analysis from 2015 here.)

Yes, the council opposed a massive expansion of the park lands because of a loss of a relatively small number of parking spots in a city that already had the most plentiful and cheapest car parking in Australia. 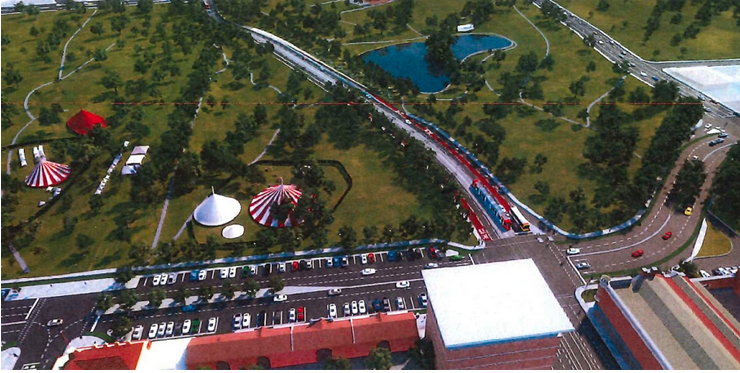 An illustration of a 2015 Weatherill Government plan to close Rundle Road and create more park lands.

Fast-forward to 2022, and Rundle Road is currently closed for months for an Illuminate Festival event – stunningly supported by the city council, despite “serious misgivings” from Team Adelaide leader Alex Hyde.

However, a proposal to close adjacent Bartels Road for the Harvest Rock Music Festival in November – an event announced last year as part of previous Premier Steven Marshall’s “Bloom” concept – has proven to be a bridge too far.

The council members, facing an election that month, have drawn the line at all the people, attention and money coming into the city for the event because… well, inconvenience to cars and such.

Last night Adelaide city councillors rejected an application by the festival organisers to close a portion of Bartels Road.

The closure would have allowed the festival – which is spruiking estimated minimum attendances of 20,000 patrons and $10 million in economic uplift to the state – to go ahead in Rymill Park/Murlawirrapurka and King Rodney Park/Ityamai-itpina from 19—20 November.

The festival organisers say the event can’t go ahead without the closure.

The Government will declare Harvest a major event and ensure the road closure happens.

Which essentially means that the Government is fighting the city council to allow more foot traffic, money and customers for city businesses.

Councillor Mary Couros said she made a promise to local residents and businesses that there wouldn’t be more road closures.

“I can’t vote for something that I clearly said I would not do again, and I will not close the roads again,” she said. “Again, I’ve made that promise to certain businesses: a lot of businesses who are not in hospitality, [and] to the residents.”

Councillor Helen Donovan, a relentlessly sensible member of the council, made the obvious point in support of the closure.

“We’ve been presented with all the data that shows the City of Adelaide has been very successful in drawing people back into the city post COVID, and all of the information that we have, all of the analytics show it’s not because they’re coming in for bread or a pint of milk. They are coming in because we have a very unique offering,” she said.

Mullighan told InDaily that he was stunned by the council’s approach. He hasn’t forgotten the previous council’s move to kill off his Rundle Park plan.

“The thing I find galling is just the inconsistency and the goldfish-like memories we get from the Adelaide City Council,” he said.

The council members who voted against the closure – eight out of the 10 in the chamber last night – say they are concerned that the road closure will discourage people from coming into the city at a crucial time for retail.

If that happens – and it’s a big ‘if’ – it’s only because the council has helped condition Adelaideans to believe that the only way they can enjoy the city is by driving in and parking in an ultra-cheap car park near the shop that takes their fancy. It’s a view of the city that’s unmoored from reality.

As Donovan pointed out, if the city’s offering is attractive and unique, people will come, regardless of whether one out of dozens of possible roads into Adelaide is closed. Nearly every major event demonstrates this truth.

As for the latest shenanigans, it’s clear that if the city council had supported Mullighan’s Rundle Park expansion plan, none of this handwringing would be happening right now.

But let’s take the councillors’ views to their logical conclusion.

Let’s get rid of everything in the city that makes life a bit more complicated for car drivers and residents: the football and cricket at Adelaide Oval, WOMADelaide, Fringe, the Festival, Illuminate, the Christmas Pageant, the V8s, Tour Down Under, blockbuster exhibitions at the art gallery. Get rid of the lot. Move them all out to the ‘burbs and beyond.

City residents can then live in absolute quietude.

More importantly, drivers will be free to trundle into the city without a care via the vacant wide streets, straight to a rockstar spot on Rundle Street, then stroll unimpeded by nasty crowds to K-Mart in the Mall, where they can buy a six-pack of undies in peace and solitude.

NOTE: This article was amended after publication to include more detail about the Weatherill Government’s contentious plans for Rymill Park as part of the Rundle Road closure.