The sad human cost of war is reflected not only in the death, injury and destruction of property internally caused to a country such as Ukraine, but in the scale of the refugees now flooding from its war-torn regions. A total of 10.5m have been displaced from their homes, 3.6m of those escaping beyond the borders of Ukraine as international refugees.

All countries who are party to the 1951 Refugee Convention and its 1967 Protocol have obligations in international law owed to refugees. The United Nations High Commission for Refugees (the UNHCR), formed in 1950 to assist refugees and stateless people resettle after the Second World War, leads and coordinates international efforts to provide aid to and resettle displaced people, such as those currently escaping Ukraine.

As a party and signatory to the Refugee Convention and Protocol, Australia has the same obligations towards asylum seekers seeking refuge in Australia as other signatory nations, and we have begun a process of repatriating escaping Ukrainians to our shores.

The majority of those leaving Ukraine have gone to neighbouring countries; primarily Poland who has shouldered the responsibility of taking thus far over two million refugees. Others are going mostly, in descending order, to Romania, Moldova, Hungary, Russia and Belarus. Poland should be singled out for its extraordinary willingness to assist the Ukrainian people. It had been telling Western leaders for some time what the Russians were up to and intending before their invasion of Ukraine.

That aside, it is a Herculean national effort to receive in a matter of weeks the number of Ukrainian refugees it has, and the world ought to recognise the people of Poland for their extraordinary humanitarian effort. It is also time we started listening a little more intently to what the eastern NATO member countries have been trying to tell us for some time about the aggression of Russia.

The hope of any refugee is to return to their home, but by the very nature of their plight they may not be able to. A refugee in law is a person who has left their country and either cannot or is unwilling to return due to a well founded fear that they may be persecuted or killed due to their race, religion, nationality, or because they are a member of a particular social group, such as the Uighur people in China who have been persecuted relentlessly by the Chinese Government, or due to the political beliefs held by that person. In those circumstances, each nation party to the Refugee Convention and Protocol must assist if it is called upon to do so.

Each country’s domestic legal system will have mechanisms to evaluate and determine claims by asylum seekers asking for refugee status. In Australia, the Migration Act is the primary piece of Commonwealth legislation dealing with people arriving by plane or boat and who seek asylum, or alternatively those who have overstayed their visas. Asylum seekers have access to the courts to challenge administrative decisions made against them. However those rights are sometimes limited, and some administrative powers are discretionary and are held in the hands of the Minister for Immigration, Citizenship, Migrant Services and Multicultural Affairs alone.

Historically the problem for Australia has been that many asylum seekers arriving by boat have been brought to our shores by people smugglers, have no identifying papers, which on occasion have been suspected of being deliberately destroyed, thus casting doubt over whether they are genuine refugees or not.

Australia’s treatment of asylum seekers has been criticised in the past. But in law Australia must detain asylum seekers who do not hold a valid visa on arrival until their applications are processed and a visa issued. Detention however can be indefinite until an application for refugee status is determined, and it has been that element of our refugee system that has attracted criticism. That, as well as the use of offshore detention facilities.

The High Court has more than once upheld the lawfulness of our system. Further, there is no substantial difference in the policy approaches toward asylum seekers as between the major political parties. The Keating Labor Government introduced offshore processing of asylum seekers in 1992. The Howard Coalition Government followed in 2001 with what was known as the ‘Pacific Solution’, until it became unnecessary. The Rudd Labor Government reintroduced a version of the ‘Pacific Solution’ in 2013. Since then the number of offshore processing facilities and the number of offshore asylum seekers has fallen dramatically under successive governments in the face of criticism by the Australian people.

Australia however has been readily accepting of Ukrainian refugees all of whom have been welcomed in Australia. Their circumstances are clear cut; all Australians recognise that leaving their war-torn country was not a choice any fleeing Ukrainians could have wished for, and no doubt all wish to return when they are able. More to the point, we are fulfilling our international obligations in law. Such people have been wrenched from their peaceful lives, losing property, jobs, businesses and forced to leave loved ones. Their plight is a terrible one, and our doors are rightfully open. In short, citizens of the world are ready to help Ukrainian refugees however and wherever we can. 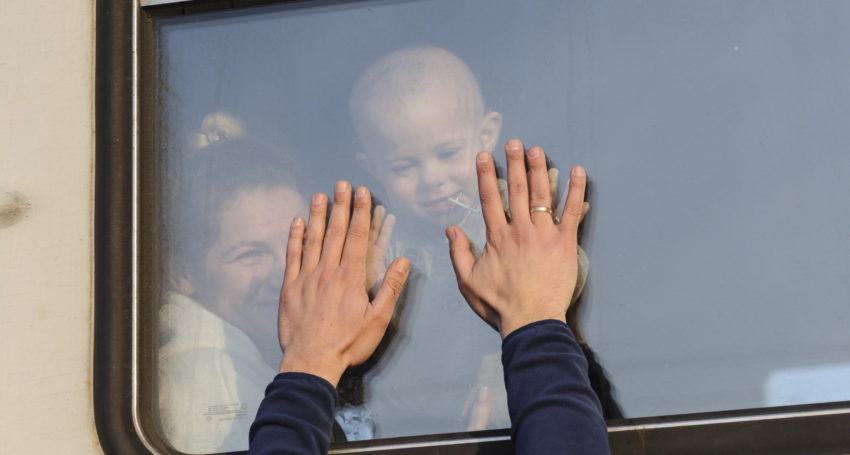 Ukrainian refugees about to leave Lviv for Poland in March. Photo: EPA/MYKOLA TYS

The problem for Ukrainian refugees in Australia until recently had been that whilst we offered shelter and safety, their lives were immediately on hold. With no capacity to work or continue a course of study, with limited access to health care, life is in stasis; wen they might be able to return to their country an unknown.

That was until late last week, when our federal government announced that Ukrainian refugees will receive Temporary Humanitarian Visas Sub Class 786. This is a significant development in law for Ukrainian refugees because a Temporary Humanitarian Visa, valid for three years, enables a person to work or study and register for Medicare. There is plainly a synergy here. Australia is crying out for labour, but more importantly these people can now get on with life and contribute to Australian society. The Australian government is to be congratulated on its decision and indeed was by the Refugee Council of Australia in a public statement following the decision.

Let us be reminded of how many refugees or those from a refugee background have over the many centuries of human conflict contributed not just to their adopted nation, but to humanity. In Australia, Frank Lowy, the successful property businessman and philanthropist, the legendary soccer broadcaster Les Murray, comedian and author Anh Do, respected jurist The Honourable James Spigelman whose parents survived the Holocaust, and our own South Australian and much loved immediate past Governor, the Honourable Hieu Van Le, who arrived in Darwin Harbour by boat from Vietnam in 1977. Internationally, Albert Einstein was a famous refugee from Nazi Germany, as was fellow physicist and grandfather to Olivia Newton John, and Nobel Laureate Max Born who was born in what is now Wroclaw, Poland. Madeleine Albright who was just laid to rest was a refugee from Prague escaping communism, as was Henry Kissinger, another German Jew fleeing Nazi persecution. The list goes on and on. Rita Ora from Kosovo, Gloria Estefan from Cuba, artists Camille Pissarro and Lucien Freud, and another Freud, Sigmund the famed psychoanalyst. Marlene Dietrich turned her back on Nazism refusing to perform in Germany seeking refuge in the U.S, and Billy Wilder and many other Hollywood success stories.

But for our willingness to abide by law and our international legal obligations and accept these refugees, and in many cases their parents, as many fled as children, the world would be a poorer place. Yet whilst legal structures exist to cater for an intake of refugees – and there are legal obligations to do so – we are motivated less by law as by a desire to help displaced people live in peace and continue their lives or to start again. It is the opportunity to embrace goodness in the face of evil, not for any reason than that we wish to help. At least we should, for as one of those famous refugees Albert Einstein said, ‘the world will not be destroyed by those who do evil, but by those who watch them without doing anything’. 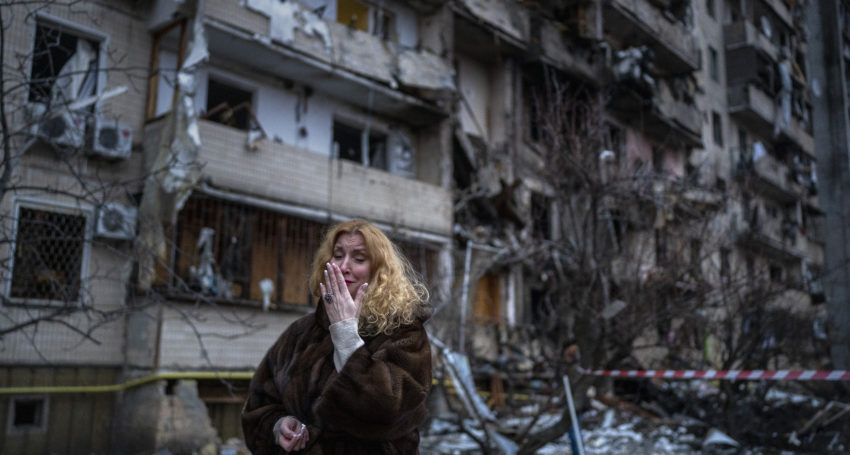 Natali Sevriukova after her apartment block was hit by Russian rockets in Kyiv. Photo: AP/Emilio Morenatti

Even as you read this article, there are Ukrainians risking their lives to leave their country. Stories abound of bravery and courage as parents separate so that children may escape the savagery of the Russian onslaught, to lead an altered life but one protected by the rule of law enabling a peaceful existence.

As to how to help the refugees of Ukraine, you may contact Ukrainian community groups or donate to reputable charities and the UNHCR, because even though Australia may be doing its bit to uphold our legal obligations, the needs in Poland and its fellow east European neighbours is dire and mounting.

As for acting for what is right rather than merely what is required by international law, the people of Ukraine need to hear from us, and all who support them across the globe, that once they are rid of their Russian aggressor, we the West will be there to rebuild what they have lost so that those refugees presently in our care may return to a life once cherished.

If the West has rediscovered its purpose in the face of tyrants, it must also rediscover its conscience and soul – to concentrate on what really matters rather than what does not. There is a sense that more than just the redemption of Ukraine is at stake in this current conflict.