What with three kids and being leader of the Labor Party and all, he may not have had time to get to grips with it as yet.

But no doubt it won’t be lost on him that despite being remembered as one of history’s greatest wartime leaders, the Tory icon was evicted from office within months of the conflict’s end in a landslide election loss, in a poll fought on Britain’s post-war future.

While the messy third act of SA’s COVID management has precluded Steven Marshall from hitching his campaign to his pandemic record, Labor’s entire strategy is predicated on the Churchill principle: that the electorate is more interested in the future than the past.

The Libs, instead, are standing on their record (or at least the bit of it that doesn’t mention soaring debt); that, and a concerted scare campaign about Labor’s costings.

Aptly enough, this week the Liberal camp rolled out John Howard to endorse the SA Premier; for there are shades here of the former PM’s famous ’98 victory, when he risked his imposing majority to take a GST to the election, just five years after a similar policy had been soundly rejected by voters.

In that campaign, the federal Coalition relentlessly flogged the theme of Labor’s recession, arguing that after more than a decade in power, the ALP shouldn’t be so quickly returned to office.

There are shades of that campaign in the SA Libs’ recent overtures: a viral video (featuring yours truly, indeed) even ends with slo-mo footage of ex-Treasurer Tom Koutsantonis dancing for the camera (it was shot by his daughters, to mark the end of their COVID lockdown), eerily reminiscent of the ’98-era ads depicting then-Shadow Treasurer Gareth Evans gyrating smugly after Labor’s unexpected victory five years earlier.

When Labor 'manages' the budget, it never ends well. pic.twitter.com/hL4hThMhll

But there are also shades of past state campaigns – most notably Isobel Redmond’s doomed premiership bid in 2010.

Back then the Libs won a convincing statewide vote, but failed to shift enough metro seats to form government – or even come especially close.

But Liberal insiders are unconvinced: they say their own polling, particularly in crucial Liberal-held marginals, tells a different story.

They insist their message is resonating: the same message Labor used against them in 2010.

Back then, it was Kevin Foley as Treasurer who hammered the line that the Liberals’ costings simply didn’t add up.

The message didn’t resonate until the penultimate day of the campaign, when the Opposition released its costings and – you guessed it – they simply didn’t add up.

Thus, the pressure on Labor’s financial statements this week will be intense.

And, inasmuch as the line about Opposition profligacy has resonated, Malinauskas has played up to it.

Whatever his strengths as a leader, a crucial weakness appears to be an inability to improvise – to change horses mid-stream.

I noticed this at a pre-campaign press conference he called to release a glossy brochure detailing actions the Government must take right now to deal with the COVID crisis.

But when I asked him if he would commit to take the same actions if the issues remained unresolved by March and he was elected Premier – he declined to do so.

The Opposition Leader then, was urging the Government to commit to a course he couldn’t even commit to himself.

In reality, of course, he was probably conscious that Labor’s policy is endorsed by a caucus process and believed he shouldn’t commit the party to a particular course if it hadn’t been ratified by the shadow cabinet.

Still, if I were a member of the shadow cabinet, I’d probably have preferred my party leader to simply not look like an aimless hypocrite. 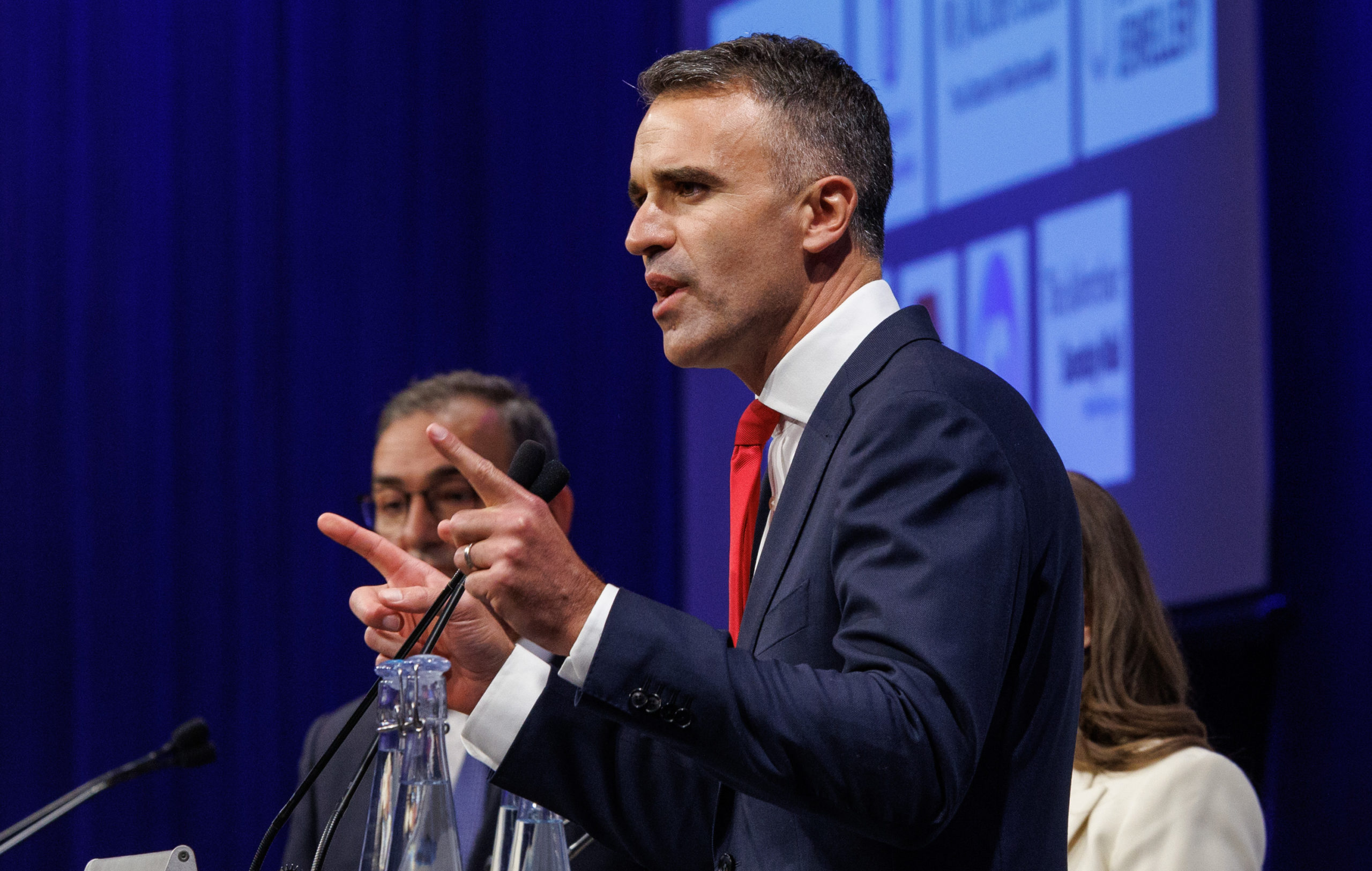 There’s a little of that inability to shift stride in this campaign.

With the Government finally, belatedly, finding some focus, Labor has obligingly played into its hands, with successive announcements committing a Malinauskas government to yet more spending, while probably not convincing many more people to vote for them.

A $181.65 million public housing plan, for instance, may be worthy public policy – but coming when it did it potentially reinforced the Liberal message about Labor spending more than it convinced anyone who wasn’t already voting Labor to do so.

Still, if the Libs have taken some lessons from history, they’ve still got a bit to learn too.

One thing the SA branch of the party has never really come to grips with is how to keep potentially crucial independents on side.

For example, by not rolling out former party leaders to shitcan them a few days out from polling.

Whoever thought it was a good idea for Redmond to break her strict “I hate the media and don’t talk to them any more” policy to have a gratuitous crack at Kavel defector Dan Cregan in today’s ‘Tiser should probably give strong consideration to a career outside politics.

Look, it’s possible that Cregan won’t win that seat; but it’s probable that he will.

So what does it serve antagonising him just days before the Premier could well be grovelling in his office trying to keep his job?

And yet, for all the ghosts of history that haunt this campaign, both parties appear to hope South Australians have short memories.

Labor’s own negative ads have taken a different hue: the fear isn’t directed at the Liberal Party, but at the health system – with a serving ambo deployed to urge people to vote for Labor “as though your life depends on it”.

Party insiders are convinced the ‘profligate’ tag won’t resonate because people believe you can never spend enough on health.

And yet, they themselves spent the best part of their 16 years in office trying to convince us that health spending had to be reined in.

Remember Kevin Foley warning that if he couldn’t get a handle on it – or the Commonwealth intervene – health spending would ultimately consume the entire state budget?

You do, of course, remember Transforming Health – the belated and politically-disastrous attempt to actually do something about the runaway health budget… only for the Weatherill Government to blink at the final turn and embark on a last-minute hospital spending spree.

And after all that – after 16 years of warning that the spiralling health budget was unsustainable – now they’re telling us that they don’t intend to deal with it, but exacerbate it.

As for the Libs, I’d say I’ve never seen a more unfocussed and chaotic campaign – except that I also covered their disastrous 2006 foray.

I think it’s fair to say that if they do succeed in winning Government, it will either be because of a brilliant but covert marginal seat campaign – or a complete fluke.

Consider, for a moment, the inherent inconsistencies in almost every message.

Malinauskas is a risk because he’s inexperienced.

But he’s also a risk because of his record in government.

You can’t trust Labor because they ruined the state.

Which is going great guns with record growth and employment.

Then, of course, there’s the very premise of their costings outrage, predicated as it is on the fallacy that Labor is pledging spending commitments totalling $3 billion to the Government’s meagre $288 million.

A tally sheet released yesterday conceded that the bulk of the Liberal agenda had already been passed by cabinet prior to the caretaker period – which means, they claim, it is already budgeted.

And that’s without the bulk of the $662 million to be spent on the much-vaunted or much-criticised (depending on your perspective) city stadium, which apparently falls beyond the forward estimates.

Only three months ago, Treasurer Rob Lucas was predicting this year’s $1.5 billion deficit would be replaced by a $102 million surplus next year, before more surpluses exceeding half a billion dollars in the following two budgets; yet almost a billion dollars of extra spending is handily offset by yet another increase in debt and some minor tinkering with public sector executive and contractor numbers.

A 40-year career in politics and years from now this will be only file vision TVs will ever use to show Rob Lucas.

Still, Lucas won’t be here after March 19, so whatever the budget impact, it’s someone else’s problem to worry about – John Gardner’s, or David Speirs’, or DVHP’s, or even Vickie Chapman’s.

But if the Libs can pull off a victory – either by an inspired marginal seat campaign or, as discussed, sheer luck – they’ll be rightly hailed as geniuses.

For by fighting a campaign not merely on the premise of simply having managed to deliver some of their previous pledges from 2018, but also on the premise of doing as little as possible if re-elected – they could well be the first Government in history for whom the bar is set so low it would be almost literally impossible to fall beneath it.

Their only miscalculation might be if the electorate – or at least those pockets of it that will turn the election result – is actually looking for a clearer vision for SA’s future after two pandemic-wracked years.

Labor’s certainly banking that – whatever the cost – the Liberals, while having still not quite won the war, could yet lose the peace.