It may be a long road, but Australia can help bring the war criminal Vladimir Putin to justice.

Vladimir Putin is a war criminal. About that there really isn’t any doubt. However, efforts to bring him to justice face very large obstacles. These may appear insurmountable, but there is an international legal initiative that Australia can pursue that will support efforts to end Russia’s attack on Ukraine and may ultimately see Putin held to account for his crimes.

US President Joe Biden has called the Russian invasion of Ukraine “a flagrant violation of international law”, rightly saying that “Putin is the aggressor. Putin chose this war.” NATO Secretary-General Jens Stoltenberg has been similarly blunt, saying that Putin’s deliberate actions have shattered peace: “We now have war in Europe on a scale and of a type we thought belonged to history.”

That history established aggressive war as an international crime of the highest order. The indictments of Nazi leaders at the Nuremberg trials in 1945-1946 included the specific charge of “planning, initiating and waging wars of aggression and other crimes against peace.”

Article 1 of the Charter of the United Nations, adopted in 1945, cites the “suppression of acts of aggression” as a primary purpose of the UN.

More recently the crime of aggression was incorporated in the Rome Statute which created the International Criminal Court (ICC) in 2002.

In 2017 the states parties to the Rome Statute (including Australia) defined the crime of aggression as “the planning, preparation, initiation or execution, by a person in a position effectively to exercise control over or to direct the political or military action of a State, of an act of aggression which, by its character, gravity and scale, constitutes a manifest violation of the Charter of the United Nations.”

This is precisely what the Russian President is engaged in – the international crime of aggression. 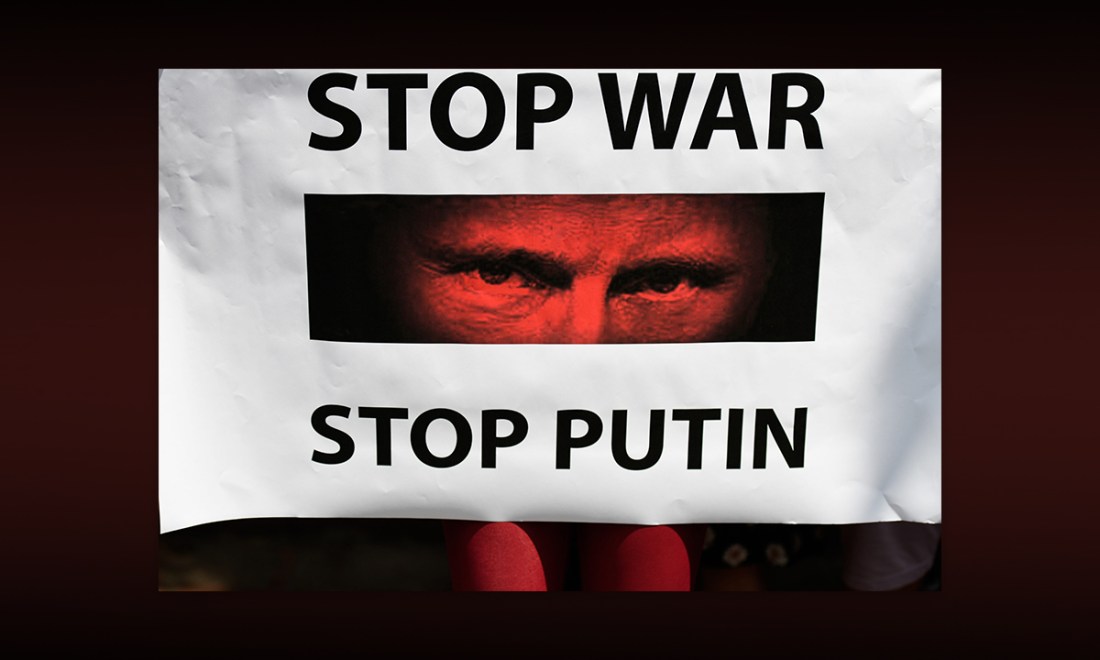 A poster at a protest outside the Russian embassy in Bangkok. Photo: Vichan Poti/Pacific Press/Sipa USA

Unfortunately, however, Ukraine and the world community have limited effective legal options to hold Putin accountable. Russia is not a party to the Rome Statute so the ICC is unable to act in regard to the crime of aggression. The ICC’s chief prosecutor Karim Khan has publicly acknowledged this, saying “The court cannot exercise jurisdiction over this alleged crime in this situation.”

Russia’s attack on Ukraine could be referred to the ICC by the UN Security Council, but in reality Russia would veto any such action, as indeed Moscow has already done so with a proposed Security Council resolution deploring the invasion. At the urging of a number of countries, the ICC has opened an investigation of allegations of specific war crimes in Ukraine such as the indiscriminate bombing of civilians, matters in relation to which the Court can exercise jurisdiction, but those atrocities may be very difficult to sheet home to Putin himself.

Ukraine has also turned to the International Court of Justice (ICJ), the World Court, seeking to contest Russia’s propaganda claims of genocide against Russian people in the Donbass region of eastern Ukraine. Ukraine argues that no genocide has taken place, and that Russia’s unsubstantiated claims provide no basis for a right to intervene in, let alone invade, Ukraine. The Court will consider next week whether the urgency of the matter requires immediate measures to be ordered before the case can be heard in full. Once again, however, these proceedings will not directly address the crime of aggression and Putin’s personal culpability as Russian head of state.

However there is another path towards judgment on Putin’s actions. This week an emergency session of the UN General Assembly adopted by an overwhelming vote a resolution condemning Russia’s invasion of Ukraine and calling for Russia to withdraw its forces. The General Assembly resolution is worthwhile as part of a wider strategy to diplomatically and economically isolate Russia; though in the short term Russia will just shrug it off.

Importantly, the General Assembly can take another step if majority support can be mobilised. In this General Assembly can refer the question of Russia’s attack on Ukraine to the International Court of Justice for an advisory opinion on whether the crime of aggression has been committed by Russia’s leadership.

Despite having no binding force, ICJ advisory opinions carry great legal weight and moral authority. A ruling that Russia’s actions constitute the crime of aggression would have a significant influence on diplomatic and political efforts over the next year and beyond.

The Court’s inquiry process itself would expose Russia’s lies and propaganda to deep scrutiny. The Court is empowered to hold written and oral proceedings. In urgent cases the Court may take all appropriate measures to speed up its proceedings.

There is an opportunity here for Australia to move beyond a largely reactive role in this crisis, and as a responsible middle power, take an initiative that could have a very positive impact on the course of diplomacy in this crisis.

By campaigning for the UN General Assembly to seek an ICJ advisory opinion, Australia can make a significant contribution to efforts to isolate Russia and perhaps ultimately secure circumstances in which the Russian President is removed from office. Hopefully then, with the support of the Security Council, Putin may be brought before the ICC to face prosecution as a war criminal.

This will be a long road, but Australia can take an initiative now that would be a significant step on a path towards justice.