The state government claims to be promoting and encouraging a culture of walking in South Australia. The vision of the strategy is “more South Australians walking more often; all ages, all abilities”. Fulfilling this vision will require a significant shift in other state policies, as few address pedestrian safety.

The state’s Road Safety Strategy to 2031 has also just been released. It recognises that pedestrians face increased risks to their safety and that the most vulnerable pedestrians are children and older people. The action plan to implement the strategy has not yet been released, so it is too early to say whether this strategy will impact state government policy more broadly.

The South Australian Climate Change Action Plan 2021–2025 (released in December 2021) embraces strategies that promote “active travel”, which includes walking and cycling. The government also promised a low-emissions transport system and improved public transport. However, since the launch of the plan the state government has privatised trains and announced new roadworks to improve the flow of cars and freight vehicles.

Law academic Sarah Moulds in her recent InDaily opinion piece stated that the SA Parliament is displaying an increasing disconnect with the public. This disconnect can be demonstrated by the inconsistencies in recent government policies. For example, the Department for Infrastructure and Transport (DIT) fails to prioritise pedestrian safety, including safe crossings for children, older people and people with a disability.

DIT’s policies have titles such as “Keeping Metro Traffic Moving”, with little concern for pedestrian health or safety. DIT’s most recent annual report failed to mention walking (or even cycling, even though it is now drafting the 2022–2032 Cycling Strategy) and only mentioned pedestrian crossings as a way to access train stations.

DIT released a Disability Access and Inclusion Plan 2020–2022 (now a legislated requirement for all state authorities), which acknowledges the United Nations Convention on the Rights of Persons with Disabilities and commits to promoting, protecting and ensuring the full and equal enjoyment of all human rights and fundamental freedoms by all persons with disabilities, and the promotion of respect for their inherent dignity.

Despite this, the right to mobility for all, whether on foot, with a mobility aid, on a bicycle or in a motorised vehicle, has not been a pressing concern for DIT. The primary focus of this department is getting people to their destination as quickly as possible by prioritising the flow of traffic, including freight. They argue that’s good for jobs and economic growth. DIT’s purpose includes “helping our economy grow”.

The number of cars on the road is steadily increasing and vehicles continue to get bigger, including SUVs with bull bars and tinted windows, which increases risk for pedestrians. Freight vehicles including B-double trucks dominate the major road corridors through the suburbs we live in. 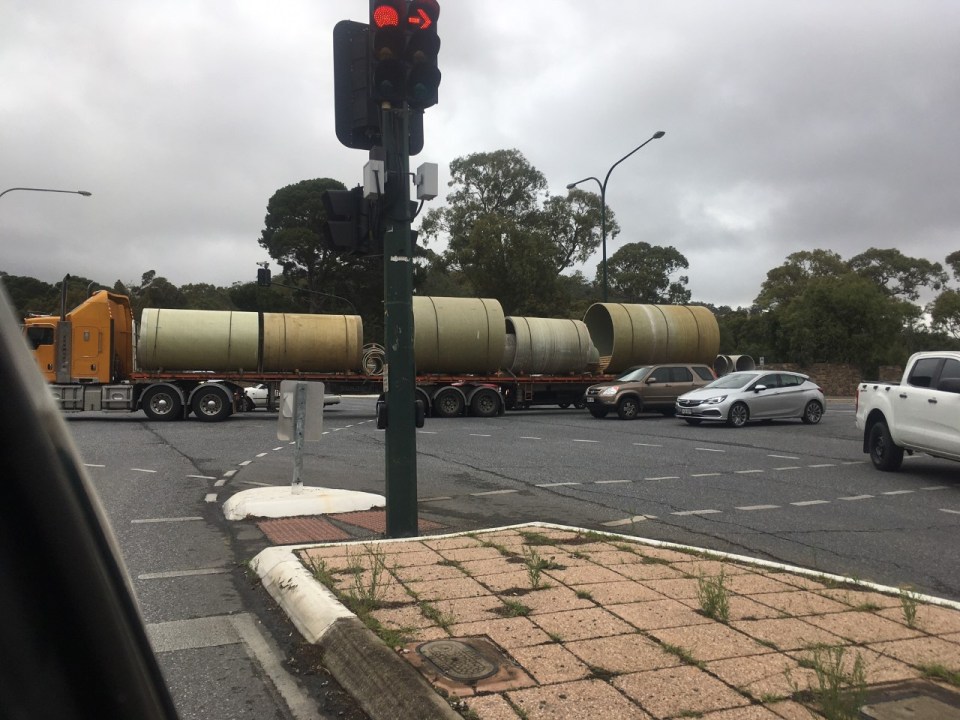 Traffic at the bottom of the South Eastern Freeway where Portrush, Cross and Glen Osmond roads meet. Photo: Margaret Brown

These roads are almost impossible for a pedestrian to cross unless there are activated pedestrian crossings that allow sufficient time for a person with impaired mobility to cross the road safely. These are few and far between.

It can take a pedestrian’s death and extensive media coverage to prompt the installation of a pedestrian-activated crossing; for example a new crossing was installed on Greenhill Rd near Hazelwood Park following the death of a 90-year-old pedestrian in 2007 and a child being hit by a car in 2018.

Professor David Levinson from the University of Sydney argues that road rules should be rewritten to put walking first. He states that the rules about giving way to a pedestrian who is crossing a road are too complicated. Road rules are intended to guide the behaviour of drivers but most people do not know the right-of-way rules – especially those involving pedestrians.

In order for a pedestrian to feel confident and safe crossing a major road, the government will have to embark on many significant changes to the current infrastructure and implement an education program based on the principle of the right to mobility for all road users. If a culture of walking is to be encouraged in South Australia within the next ten years, this will require a significant education program across many sectors, and legislative changes to clarify the rights of pedestrian in law. Changing culture is a slow and difficult process.

The United Nations Convention on the Rights of Persons with Disabilities, to which the Australian Government is a signatory, recognises the right to personal mobility. It is unclear which government department will address this important issue. The SA Walking Strategy states that in order to “facilitate walking becoming the community’s transport of choice we need leadership; partnership and multi-sector collaboration; community engagement and participation; investment; data collection and evidence-based action and evaluation”.

But who will ultimately be responsible? The Minister for Infrastructure and Transport (currently Corey Wingard), the minister with responsibility for road safety (Vincent Tarzia) and the Minister for Health and Wellbeing (Stephen Wade) are different people with separate portfolios, and there is insufficient coordination on the issue of pedestrian safety.

Who will be responsible for:

The inconsistent approach to pedestrian safety is not solely a characteristic of the Liberal government. The SA Labor Party is going to the forthcoming election with a policy of “safer and faster travel” on South Road. It supports returning trains and trams to public ownership, which does assist with mobility for all, but it has no policies on pedestrians or walking.

There are problems with federal policies too, in the National Road Safety Strategy pedestrians are referred to as “vulnerable road users” together with cyclists and motorcyclists. Yet almost no attention is paid to the most vulnerable pedestrians, namely older people, children and people with disability.

There is little political will to discourage people from driving, to reduce speed limits, to prioritise walking (and cycling) infrastructure and to increase public transport funding. All these measures would contribute to mobility for all.

We need a separate Minister for Road Safety who reports to Parliament on the safe use of roads for pedestrians. Currently the Minister for Transport has responsibility for cars and trucks – but not pedestrians – and this is a serious gap in our legislative framework.

It is one that must be attended to if the SA Walking Strategy is to have any impact especially for the most vulnerable: children, older people and those with a disability.