Days before Christmas, police commissioner and emergency coordinator Grant Stevens was putting a ‘steady as she goes’ spin on the – back then quite unheard-of – prospect that the state’s daily COVID caseload would soon hit triple figures.

“That’s probably the likely scenario, but it’s one that was forecast,” he told ABC Radio.

It wasn’t, really – but then, the forecast (as SA authorities never tire of telling us) was for a different strain of the virus than the Omicron variant we’re now dealing with.

Premier Steven Marshall’s rhetoric back in December was even more reassuring: “We’ve got this!”

That, though, was back when his primary role was as the state’s ‘MC in chief’, the warm-up act at occasional media briefings who introduced his chief public health officer Nicola Spurrier and Stevens himself to answer specific questions about the outbreak.

But the message remained: we’re all over it, it’s all under control.

Today, however, Stevens – himself housebound by a case of COVID – penned an ‘exclusive’ column in The Advertiser, whose opening gambit reads: “Well, I didn’t expect 2022 to start like this!”

As far as ‘we got this’ goes, it’s hardly reassuring (although, to be fair, ironically accurate).

Still, there’s nothing like a pandemic to put things into perspective.

A few weeks ago, for instance, I attended the annual media conference to unveil Treasurer Rob Lucas’s Mid-year Budget Review.

It was a fairly unremarkable affair, notable mainly as the last such budget briefing Lucas will give before his retirement on election day in March.

What was more remarkable, in hindsight, was that I’d entirely forgotten the annual budget update was due until I got a text message from the Treasurer’s office alerting me to the fact.

Most years, amid the annual news cycle lull of mid-December, I’d be checking in regularly in the lead-up, trying to nail down the date of the planned unveiling.

This year, I just straight-up forgot all about it.

Moreover, reporting of the Mid-year Budget Review barely made a splash in the news cycle either.

Amid an escalating public health crisis, such matters are relegated to second, third or fourth order concerns.

In that context, it’s bizarre to think that in a little over two months, South Australians will go to the polls – with the election date mandated in law.

In the usual run of things, right about now the Premier of the day would be fielding incessant questions about when writs will be issued to kickstart the campaign.

Instead, the Premier is fronting up every day to announce the daily COVID caseload and assorted stats we’ve become so accustomed to hearing.

As he should, of course, but one can’t help but wonder how the politics plays out should we still be in an outbreak scenario weeks from now.

For this will be an election campaign like no other.

At this point in the cycle, eager candidates would normally be out door-knocking the electorate, getting up close and personal with prospective supporters.

Instead, most are cold-calling constituents; after all, while they’re pledging to deliver for their electorates, none wants to be the candidate that delivered Omicron.

Moreover, all of those things that usually mark a frenzied election pitch – leaders walking through crowded malls, jetting about the state shaking hands, addressing rapturous crowds of the party faithful – will likely be out of bounds this time round.

Particularly so given the Opposition Leader seems to be in and out of home quarantine so often he might as well run the entire campaign from his bedroom.

Convention-style campaign events like Labor’s recent state forum will likely be off the table for this campaign. Photo: Tony Lewis / InDaily

Marshall says he’s not even thinking about the looming poll: he’s only worried about getting the state through the Omicron outbreak.

Although, that might be one of those Things Politicians Say that should be taken with the proverbial grain of salt.

The fact, for instance, that the formerly ubiquitous Spurrier has been relegated to an occasional cameo, while the MC-in-chief has finally taken centre stage at media briefings, Dan Andrews-style, should suggest he’s clocked that the time has come to step up in the leadership stakes.

Ditto the jettisoning of the Transition Committee in favour of the (either ironically-named or aspirational) COVID Ready Committee – on which Marshall sits. That change was billed as a symbol of the new era in which regular decisions about ongoing restrictions had become redundant as the state reopened its economy.

The restrictions, however, remain. 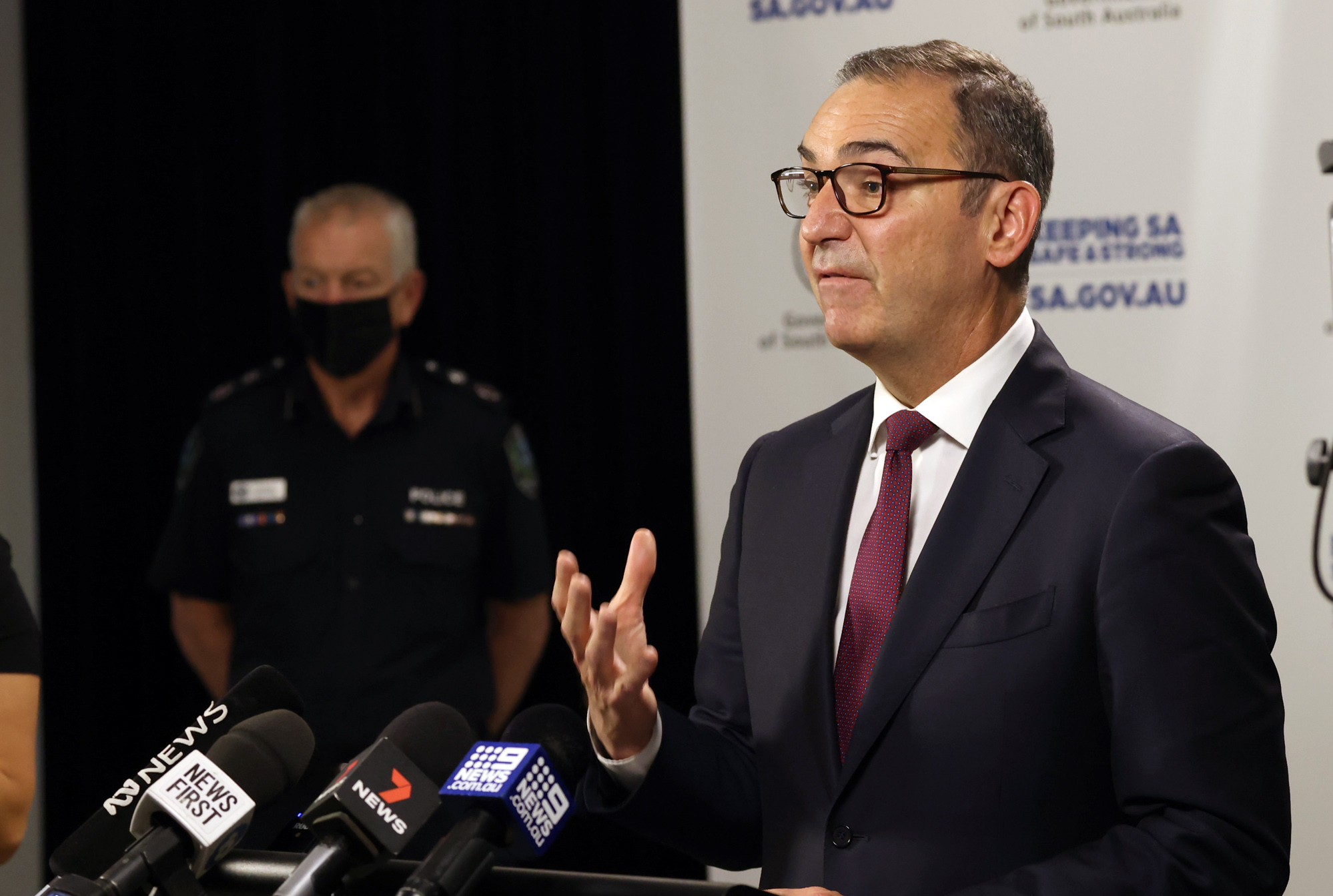 Who knows where the state will sit in four weeks time, when the campaign proper would usually begin.

Marshall evidently believes the Omicron surge will have peaked, and he’ll be banking on a swift dissipation of the widespread anxiety and pervading resentment – evident in social media comments on his every utterance – that the borders were reopened.

He argues, fairly, that when that happened on November 23, Omicron was yet to be declared a variant of concern.

This, however, ignores the fact that his government spurned health advice to reimpose border restrictions just days later, when Spurrier infamously warned a ‘wait-and-see’ approach to the Omicron threat.

How do we know this? Well, because Stevens told us so himself.

“I’ll put you out of your misery – Professor Spurrier came to the directions meeting with a recommendation to close borders, as the most risk-averse position we could take,” he told reporters at the time.

“Professor Spurrier’s position was that the best and most effective way to eliminate the threat of Omicron was to close borders.”

Such a decision would have been wildly controversial then, but one wonders how often Marshall ruefully ponders that ‘sliding doors’ moment and wishes he had his time again.

For a Government that has otherwise achieved very little, his was an administration with an unassailable advantage: it led a state that had insulated itself from the global pandemic.

There was a telling moment in PM Scott Morrison’s post-national cabinet press conference this week, in which he said of the various resolutions agreed by state and territory leaders: “Now, this doesn’t apply to WA.”

“Western Australia were not in attendance at the meeting today,” he went on.

“They are in a very different situation to the rest of the country. The rest of the country now have case numbers that are on the trajectory of rapid escalation, just like we’ve seen in New South Wales and Victoria, and they’re reporting the same limited impacts on their ICUs and on their ventilator requirements in those jurisdictions.

“WA will continue, while they weren’t there today, to operate as they have been.”

Listening to that media conference, I felt the smallest twinge of wistful melancholy, a sort of mourning for the time when the national cabinet could also snark at us about not being part of the COVID club.

My sense is that such a feeling is currently part of a broader Adelaide psyche.

Whether it translates to a tangible political shift on polling day is another matter.

It’s just as likely that a coronavirus-fatigued electorate will be disinclined to take a punt on a change of government in the middle of a health crisis.

And if the crisis abates before then?

Will Marshall be rewarded for riding out the Omicron folly?

Or will he be turfed, Winston Churchill-style, by an electorate for whom he has become an unwelcome reminder of an unpleasant era?

Frankly, there’s barely an outcome that I would dismiss at this point: the Government could be returned comfortably, or be turfed ignominiously. Or a gaggle of independents could make the decision on our behalf.

While parties may trust their polling, the dramatic shift in the public mood since Omicron arrived should remind them that voter sentiment has rarely been so volatile.

And what if the Omicron surge is still rampant a month out from polling day?

Will the Premier’s campaign consist of little more than fronting up each day at 12.30pm to try and put a positive spin on the latest case numbers?

How can he field half an hour of questions about hospitalisations and COVID restrictions and then ‘pivot’ – that word du jour, along with his latest discovery, ‘flex up’ – to his latest post-poll policy pledge?

Moreover, what will caretaker government mean for the provision of this health information – will the Opposition be entitled to a seat at the proverbial table?

Like those incessant questions about the resumption of the school year, for now there are few answers for any of this. But unlike the resumption of school, the election is barely registering on the collective radar of the voting public.

But, much like the Mid-Year Budget Review, it will happen regardless – whether we care or not.