Steven Marshall and his then deputy Vickie Chapman came to power in 2018 promising a new era of open, accountable government, with a key pledge to throw open the doors to the state’s secretive ICAC for matters of serious maladministration and misconduct.

After 16 years of Labor and with the Oakden scandal fresh in their minds, even some true believers admitted in the wake of the election loss that a reset in public administration was required.

Stunningly, we have reached a point this week where, not only is there no prospect of our now neutered ICAC conducting open hearings, but the Premier himself appears to believe that no-one should judge a matter of ministerial misconduct apart from himself.

This state of affairs is worse than a broken promise by Marshall and Chapman – it’s like voting for a right-hand tram turn only to see the government rip up the tracks.

Chapman is facing an Ombudsman’s inquiry into alleged breaches of the Ministerial Code of Conduct over the Kangaroo Island port scandal. She’s stepped aside from her ministerial roles because, as Attorney-General, she is responsible for the office of the Ombudsman.

This unprecedented state of affairs stems from an historic vote of no-confidence in the House of Assembly – a vote which both Chapman and Marshall consider being of little consequence.

When it became obvious that Chapman would be referred to the Ombudsman for investigation, Marshall began by emphasising that he’s quite comfortable with the Ombudsman being the arbiter of the issue.

However, in echoes of Jay Weatherill’s attempts to diminish the ICAC’s authority over the Oakden scandal, Marshall this week was dismissive of the Ombudsman’s powers to adjudicate the matter.

The Premier apparently believes an Ombudsman’s inquiry into Chapman cannot make a finding on whether she breached the ministerial code of conduct – a bizarre claim.

The statement on ABC radio, which passed with barely a murmur, is an illustration of just how depleted and degraded South Australia’s integrity mechanisms have become in the past few months.

To top it off, the Ombudsman himself – now the sole ‘independent’ officer charged with overseeing misconduct by public officials – is not sure whether he is seen as independent enough to carry out the inquiry, because his office is funded through the Attorney-General’s Department and its staff are technically employees of AGD.

If only we had some sort of powerful, fully independent integrity body that could look into such things?

Before the election, Chapman promised the ICAC would be able to conduct public hearings into serious misconduct and maladministration, but the legislation to enable this to happen was abandoned after months of political noise.

At one point in the mess, then anti-corruption commissioner Bruce Lander warned Chapman that the Bill on the table would ensure public hearings would, in fact, never take place.

The issue disappeared in a puff of parliamentary smoke in 2020, with both parties claiming they wanted open hearings, but neither able to produce a mutually agreeable piece of legislation. Given the subsequent easy bipartisanship on legislation to gut the ICAC, this seems convenient.

When all of this was going on, Lander asked for more money to conduct a special review into SA Health – a department he suspected was riddled with corruption.

Treasurer Rob Lucas refused, complaining that the ICAC had already enjoyed a substantial increase in funding. What Lucas didn’t say was that a decent proportion of the new money had been allocated to build the public hearing rooms required by the government – hearings that, now, will likely never happen in South Australia.

Six weeks ago, Chapman and her government completely abandoned any move to open up or strengthen the state’s integrity system, instead joining with Labor and the crossbenchers – the entire parliament, in fact – to remove ICAC’s teeth, claws and vocal chords.

Chapman was a mostly silent player in this lightning-quick coup against the ICAC.

I can only hope her lack of contribution to the debate was due to embarrassment. 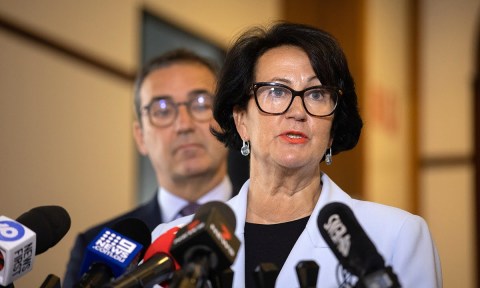 The October changes to the ICAC Act, while removing many of the Commissioner’s powers, explicitly protect politicians from the nasty attentions of South Australia’s integrity agencies.

As well, the ICAC has been prevented from investigating misconduct or maladministration.

That job now falls to the Ombudsman.

So it was breathtaking this week, with the Ombudsman about to start such an investigation into Chapman, to hear the Premier’s hot take on the matter.

Marshall said that “the ministerial code is administered by me, not by the Ombudsman. So I’d be surprised if he made a finding with regards to that – that’s my area that I look after.”

As well as handing misconduct investigations to the Ombudsman, the new ICAC Act has narrowed the definition of misconduct to only include a breach of a code of conduct.

If Marshall’s claim is true, then ministers now have no check on their adherence to the code of conduct, apart from the Premier – a colleague, their leader, a member of their own party, a person with a vested political interest in their protection.

The best-case scenario is that the Premier doesn’t understand how misconduct investigations work under the state’s utterly confused ICAC legislation.

The anti-corruption commissioner Ann Vanstone this month delivered a report to parliament raising concerns about the narrowed definition of misconduct, but also flagging numerous other issues which should be playing on the minds of voters.

On misconduct, Vanstone says the definition in the new Act is unclear, uncertain and likely unworkable.

Even if Marshall is wrong about the Ombudsman’s powers, as seems likely, the new Act might make it difficult for a breach to be proven.

“The amending Act has changed the definition of ‘misconduct’ so that only those contraventions of a code of conduct that are ‘intentional and serious’ can constitute ‘misconduct’,” Vanstone writes.

“The definition is quite unclear. Its lack of certainty is likely to compromise the public  sector’s ability to use the concept of ‘misconduct’ to protect the community from behaviour injurious to the integrity of public administration and the public interest.”

Tellingly, she says that while misconduct is now the responsibility of the Ombudsman, she maintains an interest: “Because a system that does not effectively address misconduct, breaches of codes of conduct and maladministration creates an environment conducive to corruption.”

Overall, Vanstone argues, the changes to the Act have increased the risk of corruption remaining hidden in South Australia and undermined the ability of public administration to deal with it.

In fact, “the increased risks of corruption created by the amending Act are of such significance that the public interest requires me to bring them to the attention to the community and the Parliament”.

Regardless of Labor’s shared culpability for the ICAC changes, Steven Marshall and Vickie Chapman cannot escape the embarrassing truth that they came to power promising a stronger, more transparent public integrity system and, on their watch, the opposite has occurred.

The system is weaker, less transparent, and the ICAC, rather than being able to throw open its doors, has been forced by legislation into even greater secrecy.

It is all the more sobering to realise that the South Australian people no longer have any champions in parliament for a more rigorous and open public integrity system.

We are, shockingly, on our own.

David Washington is editorial director of Solstice Media, the publisher of InDaily.