If you want an indication of just how well the SA Liberal Party is travelling, today they’ll hold a ballot to decide whether their next deputy leader is a guy deemed by a royal commissioner to have been so deficient in his ministerial advocacy for the state that he “almost certainly” breached the ministerial code of conduct, or a guy whose dazzling tactical nous determined that the ideal response to last week’s no confidence vote against the previous deputy leader was to try to shut down parliament for six months.

Or, if you prefer, a ballot between a fellow who thinks it’s Good Political Judgement to rail against the separation of church and state on a live-streamed address to a Pentecostal congregation, and the bloke in charge of retaining the Government’s amicable working relationship with the crossbench.

Which, if you hadn’t been paying attention, is basically non-existent these days.

That this ballot is necessary in the first place is, of course, the most damning indictment of the party’s current predicament – after Vickie Chapman quit the deputy leadership in the most defiant almost-but-not-quite ministerial resignation in living memory.

To recap, the (almost-but-not-quite) Attorney-General lost a vote of no confidence in the House of Assembly last week – an event for which parliamentary researchers could find no precedent.

Government is won by the party that controls the parliament – and right now, none does

However, she defiantly refused to resign, instead welcoming the fact that some of the allegations that prompted the vote – conflicts of interest and breaching the ministerial code in relation to a scuppered deep-sea port on her native Kangaroo Island – would now be investigated by Ombudsman Wayne Lines.

If by Friday last week Chapman had any inclination that her time was up, she gave no indication of it – instead, in a heroically tone-deaf gambit, taking her staff out for a Peel Street lunch, complete with a bottle of bubbles, “to celebrate a birthday and acknowledge the hard work that’s been done this week”.

“The Premier’s position is very clear – I’ll continue to do my role as Attorney-General and Deputy Premier,” she said, insisting the episode had “come to an end”.

Which is about the point where, if this was some tragi-comic TV series, the narrator’s voice might cut in and say: “It had not come to an end.” 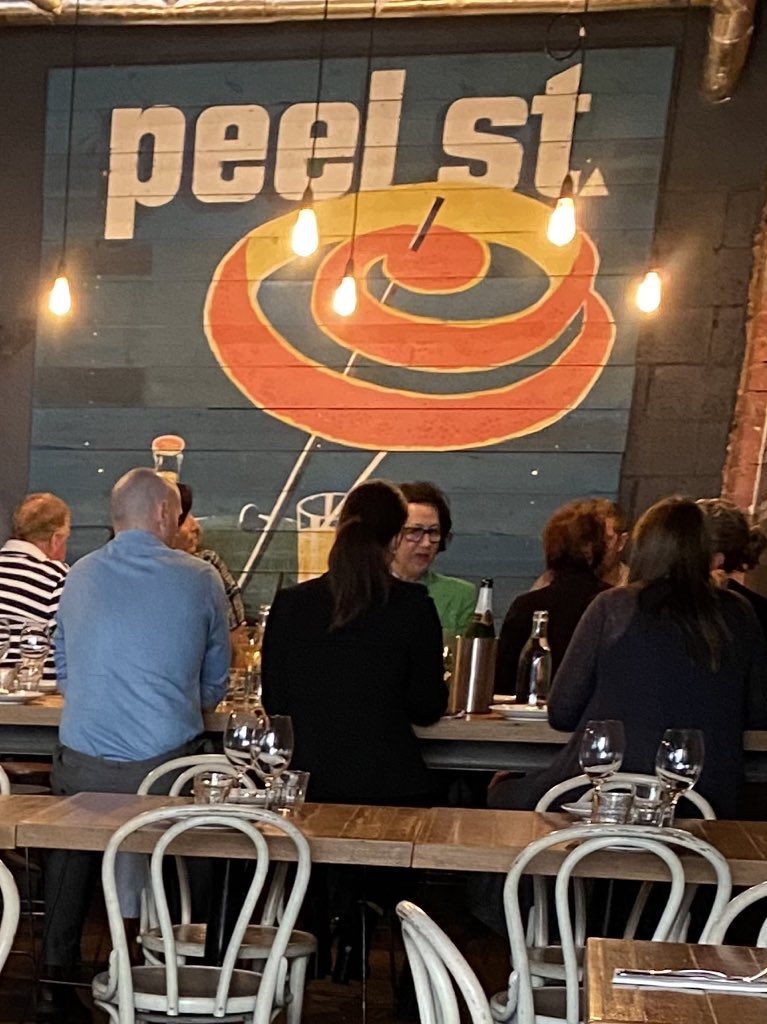 A photo posted to Twitter of Chapman and her entourage at Friday’s lunch.

For, at the aptly bizarre time of 5am on Monday morning, Chapman announced that she would “stand down” as Deputy Premier and “step aside as Attorney-General and Minister for Planning and Local Government” – at least, until the Ombudsman report is received.

The rationale, the Government insisted, was certainly not all that business about being the first minister on record in SA history to have lost the confidence of the House in which government is formed.

And it was by no means an admission that she had done anything wrong – with the Premier, extraordinarily, still proudly insisting that nixing the timber port was a great decision and one that he would have made himself.

No, it was merely – and breathtakingly ironically – to avoid a perceived conflict of interest, since Chapman was not only the subject of the Ombudsman’s inquiry but the minister to whom he was obliged to report it.

Now just take a moment to grab a cuppa and reset your brains – because this (and I appreciate this is all rather relative) is the moment that things started to get genuinely weird.

Ok, so bearing in mind that, as Steven Marshall himself put it: “It wouldn’t be a requirement for any other cabinet minister to resign when there is an Ombudsman inquiry, but because the Attorney-General is essentially responsible for the Ombudsman… the advice that we’ve received is it would be best for her to stand aside – that’s certainly what’s occurred in the past.”

He’s referring there to the case of former Labor A-G Michael Atkinson, who briefly left his ministerial posts over suggestions, later discounted, that he’d been involved in offering nemesis Ralph Clarke board appointments in return for dropping a defamation case against him.

However, there’s a distinction: Atkinson resigned his ministries altogether, and was reinstated to them once cleared.

Chapman, on the other hand, is still the state’s Attorney-General.

She’s just getting Josh Teague to do the work for a bit until the Ombudsman clears her. If he does.

But it gets curiouser.

It transpired late on Monday that Chapman was actually quitting altogether the ministries of Local Government and Planning – the portfolio in which all the trouble was caused in the first place.

So, to recap: the only reason she has to stand aside is because she’s the Attorney-General, who oversees the Ombudsman’s office. But she’s still Attorney-General, just without actually doing anything. And she’s still a member of cabinet, just without actually attending any meetings. But she’s resigned as Deputy Premier, and Minister for Local Government and Planning – just because.

And what’s more, by that logic, first-term MP and former barrister Teague was fast-tracked into cabinet because the portfolios of Local Government and Planning simply couldn’t do without his unique skillset, and the fact he’s also acting as Attorney-General is just a minor by-product of current circumstance.

Then there was another two days of confusion as to whether Chapman was still getting paid her substantial ministerial loading and if so whether there was a mechanism for her to pay it back or otherwise divest it (the Government finally claimed to have received Crown Law advice that she could forego it).

Now, I’m no political strategist but all this seems like a very convoluted way of dealing with a fairly straightforward problem.

Generally in politics, a ‘death by a thousand cuts’ is something to be avoided – not something to inflict on oneself.

After all, if the Ombudsman – using largely the same evidence heard by the parliamentary inquiry – comes to the same conclusions as the committee’s QC Rachael Gray, the Government will have done nothing but kick the proverbial can down the road – potentially to an even less propitious date.

Still, perhaps this fever dream of a political drama was all some ‘dead cat strategy’-type masterwork, given amid all the uncertainty about standing down, stepping aside and storming out hardly a soul has mentioned the fact that the constitutional crisis we were facing this time last week has not, in fact, been resolved – and probably won’t be.

The state’s constitution act itself carried no guidance about such matters, but democracies modelled on the Westminster tradition have plenty of precedent on which to overlay their own systems.

Probably the clearest modern expression of how South Australia’s democracy should operate was written in 1997 by then-Solicitor-General Bradley Selway (previously the Crown Solicitor and later a federal court judge before his untimely death in 2005), in his book ‘The Constitution of South Australia’.

“By convention,” he wrote, “a minister who suffers a vote of no confidence in the House of Assembly should resign”.

Ah, the Government repeatedly counters, but what of former Labor minister Ian Hunter, who failed to resign despite losing successive confidence votes in the Upper House?

Selway handily addresses this, too – stating that “a vote of no confidence in the Legislative Council is insufficient to create an obligation to resign, even if the Minister is a member of that House”.

Well, that should settle the politics of that debate, then. But the problem is – if, like Chapman, a minister simply declines to follow convention, there appears no clear recourse to do anything much about it.

Certainly, fledgling Governor Frances Adamson appears loath to get overly involved, beyond receiving a bow-tied document informing her that the House has lost confidence in the (almost-but-not-quite) Attorney-General.

And, to be fair, one can hardly blame her for not wanting to adopt the John Kerr role within two months of her swearing-in.

“There is no convention requiring the Governor to dismiss a minister who declines to resign following such a vote of no confidence,” Selway informs us.

While without precedent here, the scenario has been tested before, and relatively recently, in Queensland in 1997, when then-A-G Denver Beanland refused to resign after losing a motion of no confidence, prompting a privileges committee that failed to force him from office when its members voted along party lines.

But Selway has a caveat: “However, there is a risk that if the minister does not resign (or is not dismissed by the Governor on advice of the Premier) it may well result in a motion of no confidence in the Government.”

That, of course, is a far greater problem – and potentially explains why Dan van ‘the Man’ was so keen to farewell parliament until May next year within minutes of the fateful vote.

Particularly with the looming prospect of Chapman still having to face a privileges committee for repeatedly misleading the House, and the possibility of being barred from attending parliament altogether for several days – which would leave the Marshall Government with a mere 21 solid votes in a 47-seat parliament.

A scenario that should at the very least send the Governor’s advisers leafing through their dog-eared copies of Selway’s ’97 tome.

“The Governor has a reserved power to dismiss the government if it does not have parliamentary support,” it reads.

“There is a clear convention that a Premier who does not have, or who has lost, the support of the House of Assembly should either resign or obtain a dissolution of the House.” 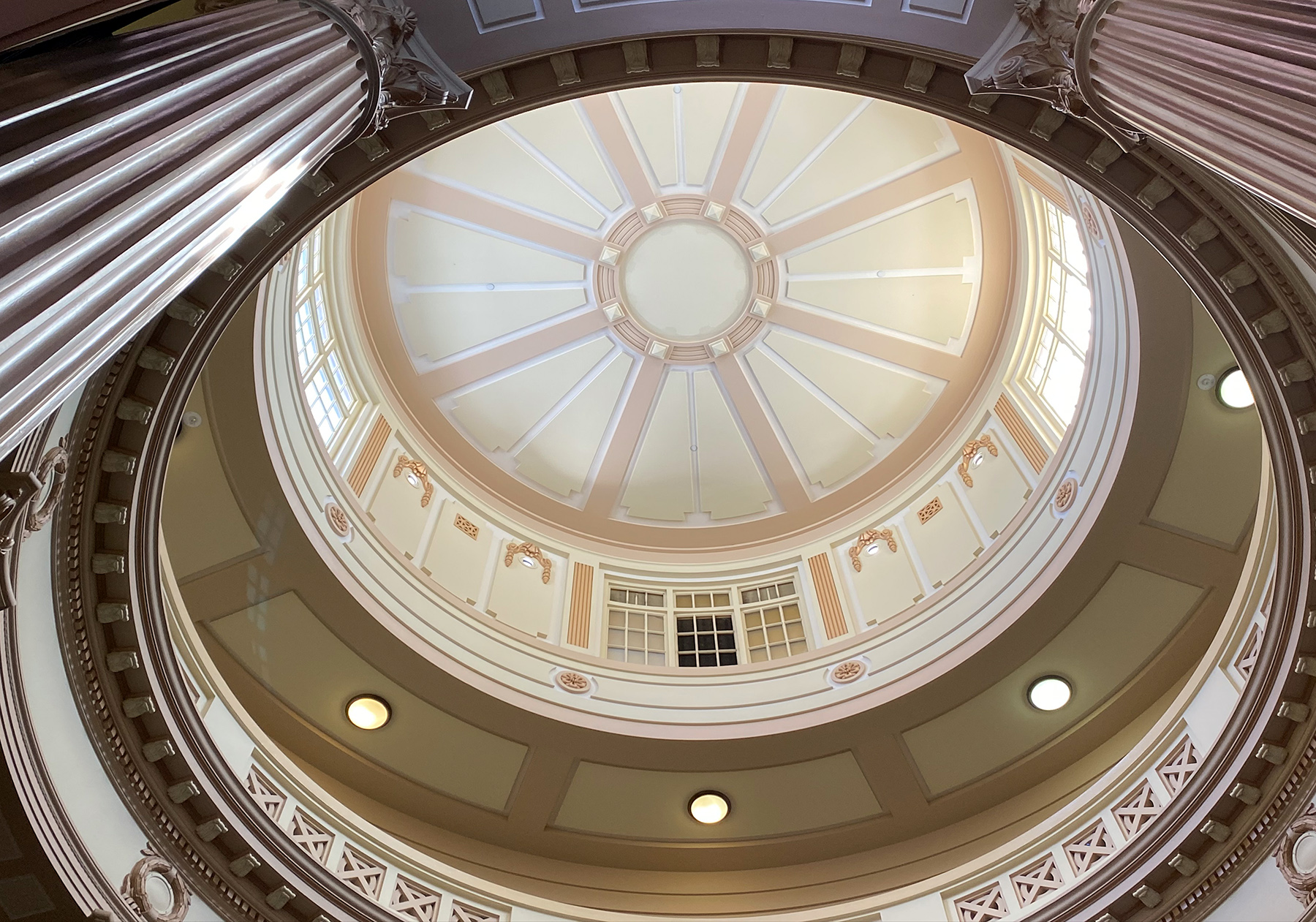 SA’s parliament has never faced the scenario it is facing this week. Photo: Tony Lewis / InDaily

Still, let’s not get overly dramatic.

After all, “not every defeat of the government in the House of Assembly has the consequence that the Premier has lost the support of the House”, he continues.

“The issue is always one of confidence.

It seems highly unlikely that the crossbenchers – determined as they were to hold Chapman to account – would want the downfall of the first Liberal government in a generation on their collective hands.

Moreover, with an election mere months away, it seems unlikely that an early poll is high on the Labor Opposition’s wishlist either.

But it is an intriguing prospect.

Marshall went into the No Confidence debate with an unambiguous message: “I have to form my own opinion as to whether or not the Member for Bragg is worthy of continuing in this role and enjoying the confidence of myself and my cabinet – and the answer to that is, unequivocally, yes.”

It is, then, at least arguable that the subsequent expression of no confidence was also one against the Premier and his Government.

None of this, of course, is resonating loudly with the broader electorate, and has been largely ignored by some sections of the media – a crutch on which the Government has desperately leaned as it seeks to defy parliamentary convention and argue this is all a sideshow predicated on political game-playing.

But that ignores a fundamental truth of our democracy: politics is at its heart, but government is won by the party that controls the parliament.

And arguably, right now, none does.

That Chapman has allowed this truth to become so clearly expressed – and then stepped away in such a way that allows the scandal to continue on for days thereafter – is something that has prompted much private wailing and gnashing of teeth behind closed doors, despite the public avowals of support.

And it’s a chapter that won’t be closed when the Liberal Party appoints her successor today.