Instead, what we saw yesterday – after some bizarre ‘will we, won’t we’ posturing by various upper echelons of government – was the street directory equivalent of scribbling a few directions on the back of an envelope.

Yes, we now have a date for the easing of border restrictions – which will give joy to families divided by COVID, some surety to prospective travellers and, no doubt, a boost to the queues lining up for their COVID jab.

But the events leading up to the ‘big reveal’ hardly convey the notion that it was a well-pondered plan.

For a start, there was Marshall’s odd ‘we’ll be open by Christmas’ gambit a few weeks back – delivered not, as with yesterday’s live-streamed spectacular, as a grand announcement, but as a random aside 30 minutes in to an unrelated media conference.

That was then kyboshed by his Health Department boss Chris McGowan, who told a parliamentary committee he wasn’t aware of any health advice “to the effect that there would be no quarantine required by Christmas” – and moreover “that’s not our expectation”.

But in another twist, Marshall doubled down – ensconcing Christmas as the key date by which ‘double-vaccinated’ arrivals would be able to enter SA without quarantine.

This may have played a part in escalating expectations of the so-called ‘roadmap’, and by yesterday morning the calls for clarity were deafening.

And thus, the Government released its ‘COVID-Ready plan’ – effectively, a timetable to easing border restrictions, with broader restrictions within SA (save for a small boost in the home gatherings cap) pushed out to an as-yet-unknown later date.

There was also a new benchmark for triggering the easing of restrictions such as density requirements, dancing, seated consumption and widespread mask-wearing.

Namely, a vaccination rate of 90 per cent of the population over 12.

That’s despite the national plan predicated on the Doherty modelling, and in contrast to the vague trigger for the border reopening date, which is a vaccination rate of 80 per cent of people over 16.

In other words, in defining the terms of SA’s so-called ‘freedom’ – as breathlessly reported across most of the SA media, despite the fact we’ve hardly been deprived of it compared to most other jurisdictions – the Government has simultaneously shifted the goal-posts.

A while back, when Marshall was still maintaining we don’t really need a roadmap anyway, since we’re not in a lockdown scenario a la Victoria or New South Wales, the Premier himself cast doubt on how the 80 per cent benchmark was defined, suggesting it would need to be assessed relative to individual local government areas that were lagging significantly below that benchmark.

Asked yesterday to clarify whether that was still the case, he began: “I think I’ve said right from day one that we don’t have to have a minimum standard of 80 per cent, but we don’t want to have a situation where you have some LGAs at 20 per cent and others at 90 per cent.”

Asked again to clarify the situation for individual LGAs, he argued: “I think I’ve just answered that”, before repeating exactly the same assertion.

He then conceded that “exactly what that is, as a minimum standard, we will determine”.

So that’s all clear then!

As clear, indeed, as the process by which yesterday’s announcement came to pass.

After all, just a day earlier the chair of SA’s Transition Committee, which oversees SA’s so-called roadmap out of COVID, told parliament: “I couldn’t tell you an exact date [for the release of the plan] because there isn’t one that I’m aware of.”

Tellingly, Nick Reade was also asked in Monday’s Budget and Finance Committee meeting about the prospect of a 90 per cent vaccination rate for the full lifting of restrictions, a prospect that has been mooted in Victoria.

“Has 90 per cent been discussed yet?” asked committee member Frank Pangallo.

“What we’ve talked about is very much focussed on the first phase, which is the 80 per cent level.

“South Australia’s committed to the national cabinet committee roadmap and so we’ve been very focussed and there’s a lot of work – an extremely large amount of work – going into what 80 per cent looks like.

“The first step in that is the borders are open and then the deliberations have been more about understanding what happens next and what’s likely to occur – both in terms of COVID coming into South Australia and that curve I mentioned earlier is very much what we’re trying to understand and the implications on the health system from that.

“We’re also looking at various restrictions and what might be able to be eased, but it’s early days in the sense of we really need that (Doherty) analysis to be complete… but, no, we haven’t spent a lot of time looking at 90 per cent.

“We’re really focussed on the 80 per cent level and once we’re there, we see what happens – we can then perhaps cast our minds to 90 per cent.”

Well, they must have turned their minds to it pretty damn quickly – because it’s now the whole ballgame as to when South Australians already here can return to some semblance of pre-COVID life.

And yet, Marshall insists we’re on track to meet this new deadline before Christmas – although there was no evidence submitted to underpin this assertion.

Indeed, that modelling Reade referred to? They still don’t have it.

Marshall conceded as much yesterday, saying: “The modelling is in multiple parts.”

“We’re still receiving some, but we didn’t want to delay this announcement today,” he said.

Really? So after all this talk about the health advice and the modelling, the Government just decided: ‘To hell with it, let’s just set a date around the mark.’

And when exactly was November 23 determined?

As recently as yesterday morning, SA Health was still telling InDaily the predicted benchmark would be met in early December.

And then, of course, there’s the key question that all of this prompts: what happens when the borders re-open?

There was no mention initially, for instance, of what the protocol will be for schools affected by a positive case – with the Education Department later clarifying their response when asked by InDaily.

Granted, term four will be almost done by November 23, but – for context – here’s a list of Victorian schools closed due to COVID in recent days: 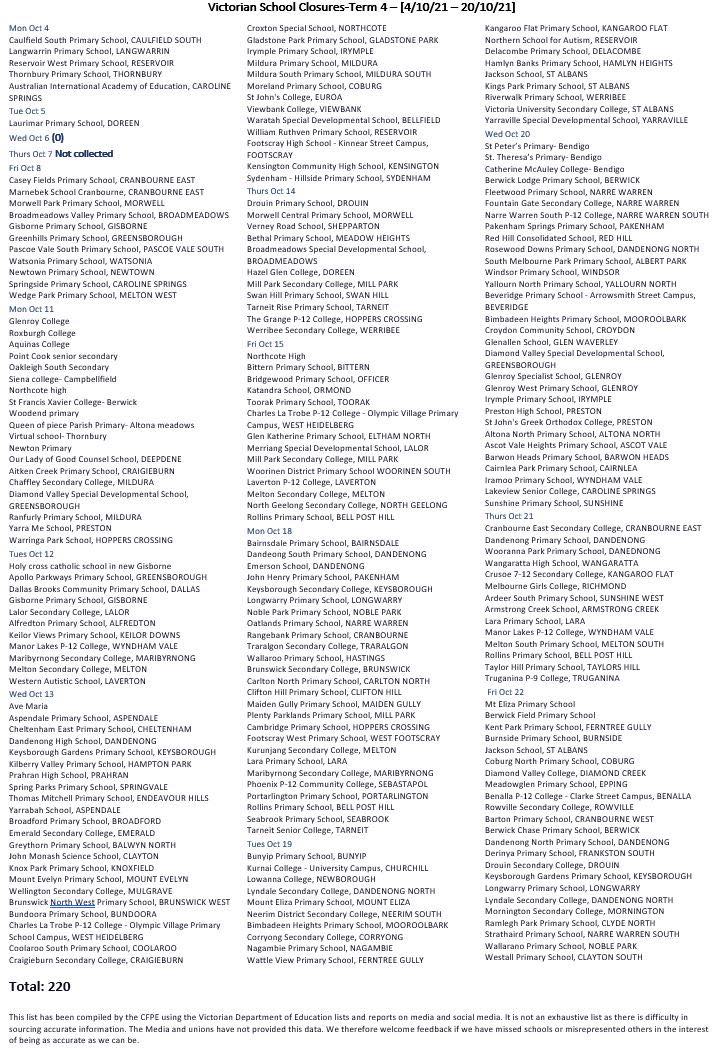 Moreover, there’s been no details of specific modelling for how many COVID cases, how many hospitalisations, how many deaths to expect after November 23 – with the Premier vague this morning when asked on ABC Radio.

“There is various pieces of modelling – there is not one piece of modelling… we have received modelling at the national level and also at the state level and that’s been reasonably iterative where Doherty and individual modellers have provided advice and that’s going to be consolidated, and Professor Spurrier said that she’s going to release that and I think that’s the time for full interpretation,” he pondered.

“It really does depend on the level of TTIQ – ‘test, trace, isolate and quarantine’ – as to what those peak numbers are going to be.”

“Well,” Marshall mused, “we want to make sure that there are as few people going to hospital as possible.”

Clarke tried again: “Are you clear what those numbers are, as of now that the COVID plan has been announced?”

“As I was saying,” said Marshall, “it’s a model… and the worst case scenario is we don’t put any restrictions in place and we do have a catastrophic situation.

“So we have got to calibrate with that model what we are going to do in terms of TTIQ – the public health social measures to minimise any hospitalisation – but we will release that modelling and then we can have a discussion.

“But it’s not one scenario, it is a model and it really depends on the vaccination rates, what’s going on interstate, the seeding, what date the seeding began from and the TTIQ that we put in place.”

So are we clear?

Because one might presume clarity was what a roadmap was meant to achieve.