“I think the ayes have it.”

With those words, Josh Teague effectively ended his brief tenure as SA’s parliamentary speaker late last night, as he formalised his demise with a division that confirmed the House had turned on him – and the Government that installed him.

It was minutes to midnight when a swift and brutally efficient political coup unseated the Speaker – the endgame, as it transpired, of the long build-up wherein a conga-line of Labor MPs spoke to their former colleague Frances Bedford’s proposed Bill to enshrine the Speaker’s independence in law.

It involved an amendment to the Constitution Act and, as one particularly disgruntled Government MP noted, it’s the fastest a contentious Bill has been “jammed through” parliament since Labor’s last constitutional coup, when it scrapped the contentious Fairness Clause that dictated how electoral boundaries were redrawn, in the final hours of parliamentary sitting before the 2018 state election.

The fastest, that is, apart from the recent ICAC hijack.

So, the point is well-made.

Parliament can be quite effective at getting things done.

But only when those things directly impact its own members and stakeholders.

There was dissent, of course.

Elder MP Carolyn Power gave an impassioned speech moments before the ascension to Speaker of her recent colleague Dan Cregan – who became an overnight pariah in the Liberal Party, whose response to his (to use the political vernacular) ratf*ckery has rivalled the savagery unleashed against former turncoat Martin Hamilton-Smith.

“I am absolutely devastated… I look at the member for Kavel and, eye to eye, I do not know how you can do this: how on one week you can sit on this side, and [then] do this,” Power said with high emotion.

“There are so many things that happen in our lives that we cannot control, but we can control who we are in this life and how we move through this life, and we can decide to do that with integrity.

Ego, certainly, is often a prevailing factor in political life, but so too spite.

Let’s go back to that ICAC Bill that also passed the parliament in record time.

Cregan was the architect of the changes that helped drive it through, and it’s understood he was privately seething at what he saw as a stitch-up – having been, according to him, asked by the Premier, Treasurer and Attorney-General to “assist other members on the revised legislation”.

That’s on top of ongoing annoyance about the fact his political career had become mired in factional limbo – overlooked for a ministry and the Speakership last year going to his moderate-aligned Hills neighbour Teague.

As always in the Liberal Party, the roots of the malaise stem from sloppy factionalism.

One of the great myths of recent SA history is that Steven Marshall came to power having ended longstanding Liberal factional divisions.

In truth, they were – at best – papered over, and very thinly at that.

The internecine warfare that had dogged recent decades may have been less public, but it was ever-present – including multiple half-hearted attempts between 2014 and 2018 towards removing Marshall as leader.

But in Government, Marshall’s approach to ending factionalism translated into utterly disenfranchising and then trying to destroy the faction to which he did not belong.

In the first days of his Government, he tolerated only one hardened Right-winger in his cabinet – that aforementioned disgruntled MP, Stephan Knoll.

Members of the Right didn’t help their own cause, of course. First Sam Duluk’s Christmas party behaviour prompted a long and bitter legal saga, then several conservative rural MPs – including Knoll – stood down from their roles amid the country members entitlements scandal.

One of them, first term Narungga MP Fraser Ellis, has since moved to the crossbench after being charged with misuse of his allowance, and will now likely stand as an independent after his case was today adjourned until after the March election.

The chief dissidents, who formed a breakaway rump known as the Centre Right, were former party president Steve Murray – and Cregan.

But if they were hoping Marshall’s moderates would reward their rejection of the Hard Right ‘Taliban’ – as they’re delightfully known in party circles – they were sorely mistaken.

The pair became increasingly isolated and Cregan, once considered a rising Liberal star, overlooked – a fact that must have surely informed his recent decision to exit parliament altogether.

That decision was later rethought, before some further re-thinking saw him abandon his party membership altogether.

Thus, in the space of a few short weeks, he’s gone from retiring, to not retiring, to quitting the party, to becoming Speaker.

As Ron Burgundy might say: boy, that escalated quickly.

Of course, had the Liberals installed him as Speaker in the first place, they’d be in exactly the same position today – they’d just have got there with far less drama.

In some ways, Cregan’s Speakership does them a favour – it takes a newly-independent vote off the floor of the House and returns Josh Teague’s vote to their ranks.

But all in all, it’s a disaster on the eve of an election.

For a Government with a comfortable majority to have lost control of parliament – so completely that they can’t even set the sitting agenda any more, after the power to recall parliament was handed to the new Speaker in a late-night sessional order – points to some grave missteps along the way.

And it’s not as if we haven’t seen it all before.

The Liberals were plunged into 16 years of Opposition because they so burned their relationship with their ex-MP Peter Lewis that he opted to back Labor and Mike Rann over another term under Rob Kerin.

Then they failed to court conservative crossbenchers Karlene Maywald, Rory McEwen and Bob Such, who all helped sustain Labor’s majority (the latter as Speaker after Lewis).

Their eagerness to distance themselves from Mount Gambier MP Troy Bell after he was charged with theft offences following an ICAC inquiry saw him retain his seat as an independent – which he’s poised to do again, with his case still unresolved.

Amd then of course, there was Hamilton-Smith – the spurned former leader who stunned his then-colleagues by finally finding a path to government via Jay Weatherill’s ALP.

And yet, here again, we see the Liberals – understandably, mind you – casting Cregan into the proverbial pit of exile.

“I think Dan Cregan’s put his own self-interest before that of his electorate,” Marshall told ABC Radio Adelaide this morning, calling his former MP “a highly ambitious person [who] wasn’t satisfied with being on the backbench”.

“He’s got a big pay bump… he’s got a huge amount of influence [but] it’s hard to see how this benefits in any way shape or form the people of Kavel.”

That post-election pizza date just got slightly more awkward then.

The shunning of Cregan became more mobilised this morning, when hardly a Liberal turned up for his Government House swearing-in. Ironically, the handful that did included the two most profoundly affected by his actions yesterday – Teague and Attorney-General Vickie Chapman, the moderate faction leading light who now faces a parliamentary inquiry into claims of a conflict of interest surrounding a decision to block a port development on Kangaroo Island, from where she hails. 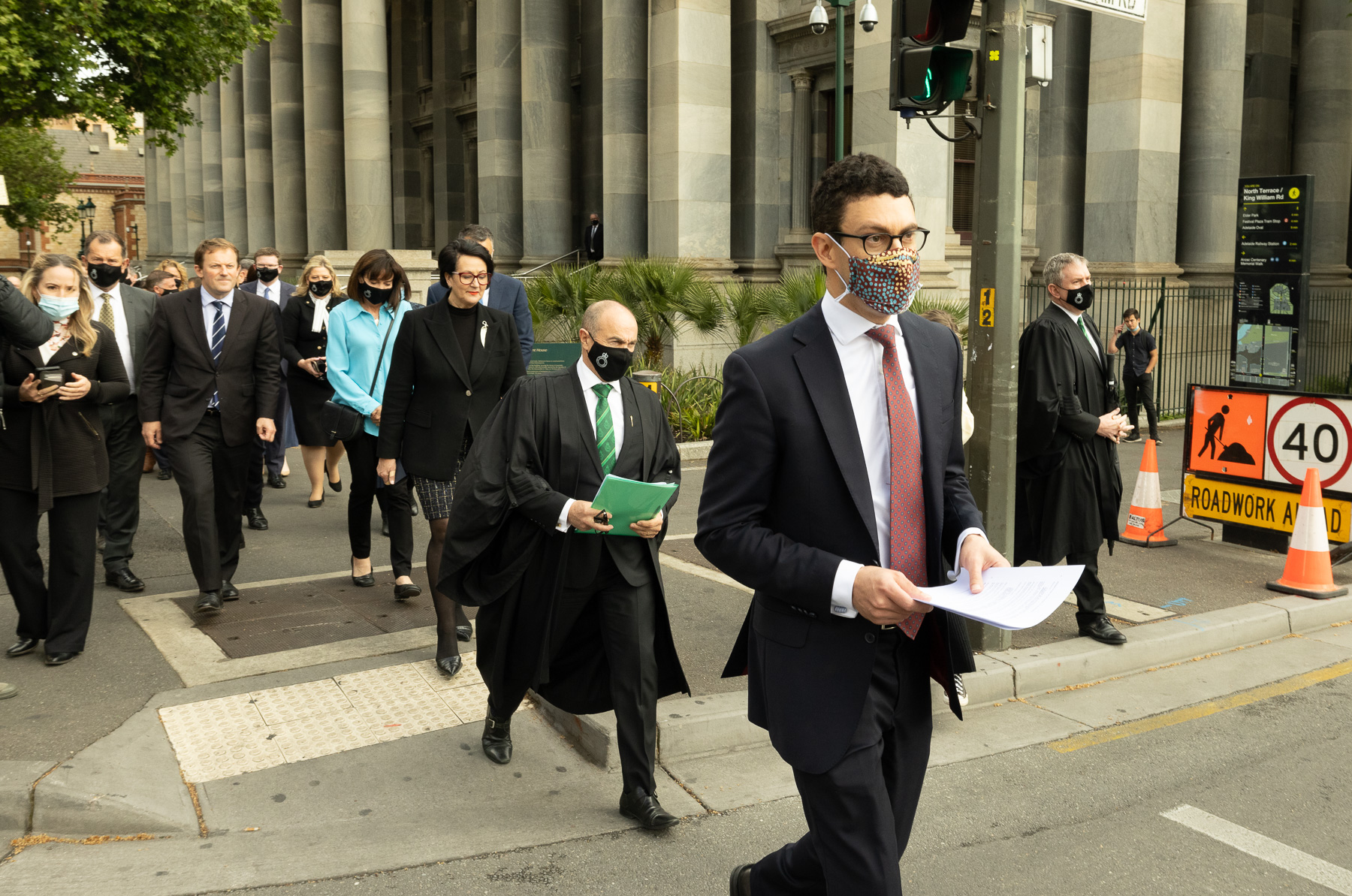 The entire episode will be seen by electors with a mix of disbelief and weary cynicism.

In the end, the travails of petty politicking may barely resonate with a jaded electorate that just wants to know when its borders will be open, and that authorities have the COVID situation in hand.

But mid-pandemic, parliament has consistently failed to cover itself with glory – a point also sharply made last night by Knoll.

“Young people, not as engaged in politics, see the petty behaviour that goes on in the chamber like we have seen today and they say, ‘Well, if this is the product of democracy, then I want to think of something else’,” he warned.

“That is a massive problem… only seven per cent of people in this country trust their state politicians.

“We do rate higher than used-car salesmen, but I think that is the only profession.

“That is an absolute travesty and what the Opposition is seeking to do here today is emblematic of that.”

Why Knoll – who is retiring in March after a brief and bruising ministerial tenure, and whose exit was roundly celebrated by Liberal moderates – saw fit to lead the charge in support of Teague is an intriguing question.

But he was far and away the most eloquent and impressive speaker against the looming coup last night.

And in five months he’ll be gone.

His fellow MPs would do well to reflect on that, and the fact they were more than happy to lose a talented contributor because of his factional ties.

Many of Steven Marshall’s woes with the crossbench have been beyond his control, but things could be different if the moderate faction hadn’t seen recent events as an opportunity to burn down their factional opponents.

And the end result is the same one we’ve seen for successive generations.