In part one of this analysis, I wrote about how the UK Astute Class option was beleaguered by its own graveyard of retired radioactive boats.

Today, I examine the US Virginia Class nuclear submarines and the potential hurdles ahead for Australian builders.

Let’s start with a simple unknown: is the Osborne naval shipyard infrastructure suitable to build the Virginia Class submarines?

The infrastructure at Osborne is managed by a Federal Government agency called Australian Naval Infrastructure (ANI). According to the most recent published report on progress at that site, ANI is managing and delivering the design and construction of the future submarine shipyard “to the specifications documented by Naval Group”.

The Osborne North Development Project, as it was called, was due for completion by the end of this year.

Naval Group’s French-designed submarine was 97m long, 8.8m wide and was to be crewed by around 60 submariners.

The US Virginia Class latest model, the Block V, is 140m long and 10 metres wide, crewed by 135, including nuclear physicists.

Whether the Osborne shipyard is suitable for construction of a nuclear-powered submarine is one unknown, whether it can handle the Virginia Class is a second unknown and whether the Australian Navy has the skills to crew eight subs of this class is a third unknown.

With so many unknowns and openly declared problems with the supply capacity in the US industrial base, why has Australia dumped a conventional submarine contract?

Marcus Hellyer, senior analyst for defence economics and capability at the Australian Strategic Policy Institute (ASPI) examined the nuclear sub option three years ago and left little doubt that there were major hurdles for Australian capability.

Hellyer noted that many claims about the advantages of nuclear submarines are “speculative and possibly questionable”.

In what seemed most unlikely at the time, Hellyer posed the question: “Let’s assume the government is willing to toss its Naval Shipbuilding Plan out the window and that the US is willing to sell us Virginia class boats off-the-shelf from US shipyards.”

He examines the additional cost of buying already built boats and still finds that there is no cost advantage.

Using the publicly available information about the two classes, he estimates a unit cost for a Virginia class submarine of US$3.25 billion. “If we multiply by 12 and convert at current exchange rate that makes around A$53.7 billion.”

“In response to questions at Senate hearings, Defence officials have stated that the estimated total acquisition cost of the future submarine program, which is designing and building 12 (French Attack-class), is around $50 billion ‘constant dollars’ (a measure which doesn’t take inflation and price escalation into account). The cost of Australian projects includes everything needed to bring a capability into service. In the case of the future submarine program that likely includes wharves, training and testing facilities, simulators, and so on.”

Hellyer adds that “these elements would need to be added to the A$53.7 billion for Virginia class boats to get an apples to apples comparison”.

“The change from Collins to the Virginias would be so great that virtually every other part of the support system would need to be replaced. The $1.5 billion facilities bill for the joint strike fighter would likely pale in comparison,” he said.

“The future submarine program estimate also includes design costs. But again, that’s not included in the Virginia’s US$3.25 billion cost per boat. What share of the Virginia program’s design costs would the US pass on to us?

“On top of that, there are operating costs. Considering the Virginia has a crew of 135 compared to probably around half that for the (French boat), just the additional uniformed workforce required could cost $400 million more per year.” 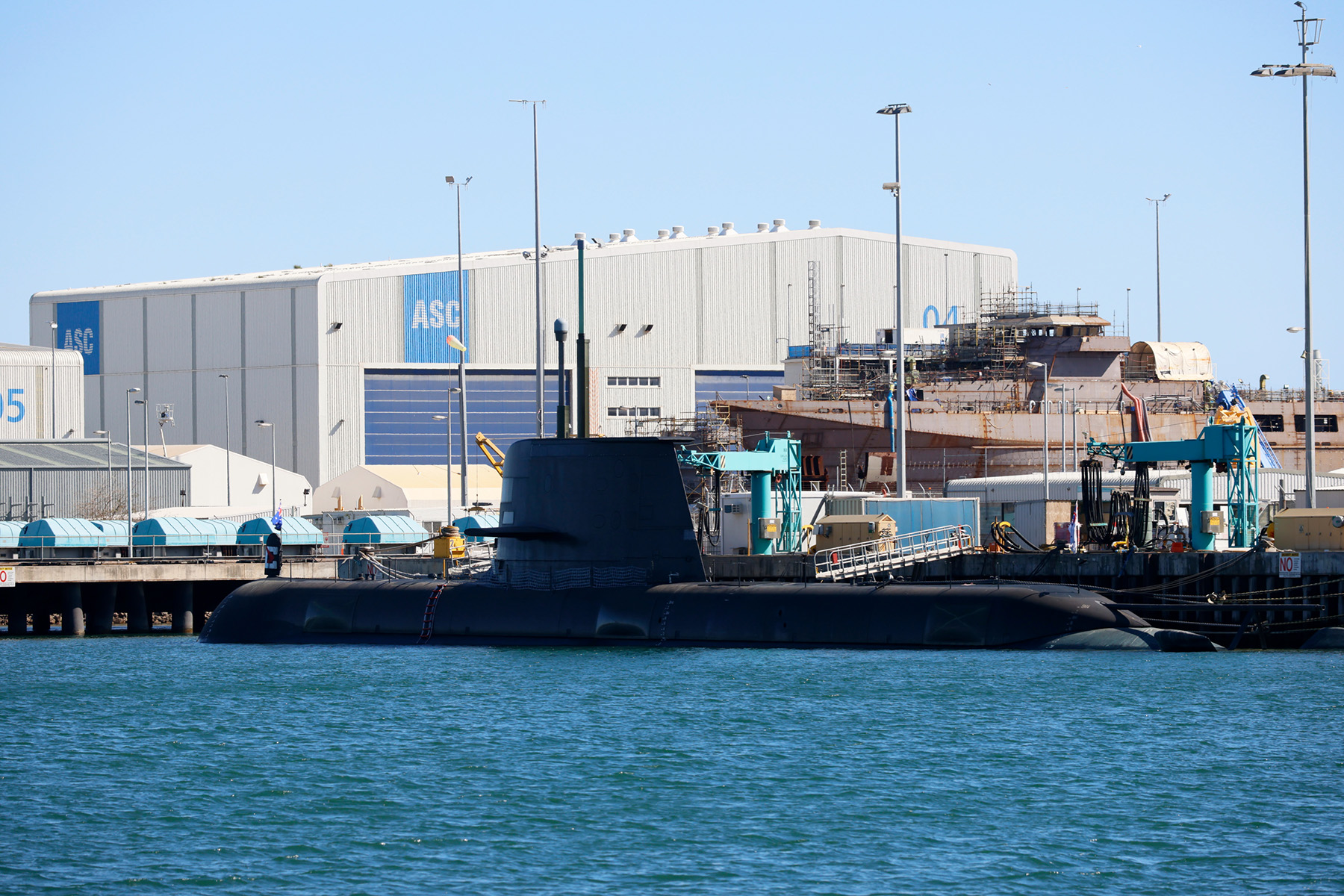 The dock at the Osborne shipbuilding facilities.

Hellyer’s analysis was based on a complete buy-in. The costs that come with re-fitting the Osborne yard and building Australian infrastructure to support nuclear submarines is a complete unknown. As Prime Minister Scott Morrison admitted on September 16, “over the next 18 months, we will work together to determine the best way forward to achieve this”.

That 18-month process is at “its earliest stages” according to the boss of the company that builds the US submarines.

Kevin Graney, president of General Dynamics’ submarine arm, Electric Boat, emailed employees on September 16 and told them: “There is no specific action we’ve been asked to take at this time.

“As the only American shipbuilder focused exclusively on the design, construction and maintenance of nuclear-powered submarines, we stand ready to support this endeavor, and have communicated that message to our Navy and government leaders.”

Graney appears to have been addressing concerns among his workers that the exclusive arrangements they have with the US Government to build nuclear submarines were not in peril.

Those arrangements are detailed in a report to the US Congress on Navy Virginia (SSN-774) Class Attack Submarine Procurement, dated September 14, 2021 – just two days prior to the AUKUS announcement.

The report also outlines cost and time pressures being experienced by the USA’s sub builders.

“A related issue for Congress concerns the ability of the submarine construction industrial base to execute the work associated with procuring two VPM-equipped Virginia-class SSNs plus one Columbia-class SSBN per year from the mid-2020s to the mid-2030s. Observers have expressed concern about the industrial base’s capacity for executing such a workload without encountering bottlenecks or other production problems in one or both of these programs,” the report says.

‘They stated that the overall increase in submarine workload and resulting increase of inexperienced new hires at both the suppliers and the shipbuilders, along with long-term challenges meeting staffing levels, are driving these unfavourable cost trends for both blocks.”

If General Dynamics (Electric Boat) is having long-term challenges with staffing and skills, after almost 30 years building this class, where does this leave Adelaide’s non-nuclear shipyard and what cost pressures can be expected?

This is another unknown.

Senior defence industry sources, based in South Australia, point to another option: the expansion of the US industrial base into Australia.

This submarine construction industrial base includes hundreds of supplier firms, as well as laboratories and research facilities, in numerous states around the US.

Much of the total material procured from supplier firms for the construction of submarines comes from sole-source suppliers, i.e. companies with an established monopoly.

While the AUKUS alliance politicians may be keen to share shipbuilding capability, the prospect of monopoly supplier companies sharing with Australian-owned manufacturers presents as an unrealistic dream, or, a great unknown.

With so many unknowns and openly declared problems with the supply capacity in the US industrial base, why has Australia dumped a conventional submarine contract?

The answer lies in the report to Congress and previous iterations of the US Navy’s long term security and strategy reports.

The reports advise that in assessing the future nuclear submarine (SSN) force-level goal and procurement rate, factors that Congress may consider include:

Notably, they advise that DOD officials and other observers view SSNs as useful for implementing certain elements of the national Defence strategy, particularly those that require countering China’s improving anti-access/area-denial (A2/AD) forces.

The reports add that observers are concerned about the ability of the submarine construction industrial base to build VPM-equipped Virginia-class SSNs and Columbia-class SSNs at the same time during the 2020s and 2030s. Increasing the Virginia-class procurement rate to something more than two VPM equipped boats per year during this period could add to those concerns.

So, if Australia had a need to lease or buy US-built submarines, can the US deliver?

The report states: “The capacity of the submarine construction industrial base can be expanded over time through actions for increasing shipyard and supplier firm production facilities and workforces.”

Is that implying an option for an Australian build?

Australian defence industry sources told InDaily it’s been a long-held ambition for these US industrial giants to expand into an Australian base, but only if US military sovereignty and US corporate monopoly are retained.

A fortnight after the AUKUS announcement of a “shared ambition” to “support Australia in acquiring nuclear-powered submarines” we don’t know which design, at what cost, over what time period and by what ownership mechanism (lease, buy, build) nor how we will dismantle the submarines and deal with the 1760 tonnes of low, medium and high-level nuclear waste.

Whether an 18-month consultation process can solve the myriad and complexity of these unknowns remains the biggest unknown.

In February 2020 the Australian Parliament’s Research Service produced a paper documenting the decades leading up to Australia’s decision to build Future Submarines in partnership with France’s Naval Group at Adelaide’s Osborne shipyard.

It canvassed every opinion and submission made in the previous 10 years and decisions by and statements of government.

In its conclusion, it stated: “The project to acquire Australia’s future submarines has already been running for a decade. With decades more to go the longevity and complexity of the FSP will necessitate a sufficiently informed parliament. One of Parliament’s core functions is to scrutinise the expenditure of public funds.”

This was particularly important given the history of difficulties encountered in complex defence procurement projects.

“Although there is an understandable need for confidentiality based on commercial and national security grounds, Parliament has only had access to limited detailed information.”

The report warned that the Australian National Audit Office has noted, in the context of Defence’s Projects of Concern list, there has been a reduction in transparency over the last five years and that not only has transparency been reduced, but “the level of formality has declined with explicit criteria replaced by unpublished principles, and processes have become less rigorous with a greater emphasis on maintaining relationships with industry”.

Just what happened to transparency is unknown.

Kevin Naughton has had a long career as a broadcaster and journalist. He was chief-of-staff to Defence Industries Minister Martin Hamilton-Smith in the Weatherill Government.