On December 8, 1994 in southern France, three cavers pushed through a shaft and fell into a forgotten wonder. The Chauvet Cave, home to a remarkable and delicate collection of cave paintings. They had stumbled upon a repository of art, story and cultural sharing, that for tens of thousands of years had passed from memory and human knowledge.

On March 22, 2020, the cast and crew of Slingsby’s Helpmann-Award-winning production Emil and the Detectives were due to fly to Los Angeles, commencing a nine-week tour across the US.

Two days earlier, Australia had closed its international borders. Ten days earlier, our Beverley Hills presenter had cancelled our season. Turns out, it was a good call and perhaps a close call for our team. More US venues followed suit and the tour was swiftly, if painfully, cancelled.

We all remember those early weeks of March, when uncertainty and fear became a cascade of closures and cancellations. It was painful, but not a difficult choice. The safety and wellbeing of artists and audiences is always our prime concern.

Back in May 2016, when the “Black Friday” federal arts funding cuts saw the discontinuation of Australia Council support for 65 arts organisations, Slingsby was one company given the chop.

Over the intervening four years we have worked extremely hard to secure a new viability. We have increased our national and international touring, doubled our turnover, quadrupled our audience and generated in excess of $1 million in performance fees. In 2019 alone, we were on the road for 30 weeks, touring across eight countries.

But all that has abruptly stopped.

Being an international touring company that can’t tour is an existential crisis. Like being a flightless bird, or a fish without gills. But actually, these creatures exist. Adaptability is key to survival.

In a country of 4.7 million young people, we have just three federally funded theatre companies dedicated to young audiences

Two days after cancelling the US tour, we affirmed our commitment to the employment contracts of our team. With a bunch of great artists on our hands, we dove into making a new, unscheduled show.

Our dual starting points of inspiration were the discovery of the Chauvet Cave and the 1991 Italian mountaintop unearthing of a 3600-year-old frozen human body.

Working from home spurred the seven of us into a period of individual research, Zooming as a group for several hours each morning to share what we had learned the day prior. Our production manager researched “big history” and the formation of the Universe, our composer plunged into the evolution of language, our stage manager explored the dark side of the human psyche.

This long-lens research will eventually make its way into a show with the working title The History of the World, including You, as told by Me. We can’t wait to eventually share our observations with an audience.

In April, Slingsby launched Slingsby by Request, an online platform that offers professionally filmed shows, complemented by crafted video interviews with the artists and live Q&A sessions. This has allowed our work to still be showcased at festivals and conferences in the US, and to be viewed online by school students around Australia. The content has been tailored to the curriculum, supplying teachers thrust into an online learning world with trusted online content.

As a “ticketed” product, Slingsby by Request has generated new income for Slingsby and the artists we work with.

This month, as our state puts forth tentative tentacles into the social world again, we are thrilled to have been invited by Adelaide Festival Centre to present the artistic re-opening of the gloriously renovated Her Majesty’s Theatre.

We’re staging a one-week season (June 23-27) of our much-travelled production The Tragical Life of Cheeseboy, and delivered creative direction for theatre and backstage tours over the weekend. Our experience with small-scale, intimate audiences has been a fortunate advantage in this strange situation.

[jwplayer video=”5yTfU2Ok”]
A clip from The Tragical Life of Cheeseboy.

Alongside being determined, Slingsby also continues to be lucky. Unlike many independent artists and differently structured organisations, we are eligible for some of the Federal Government COVID-19 initiatives. We have also benefitted from funding flexibility with two of our funding partners.

It would be nice if a global pandemic could hit at a time when everything else is going well, but it would seem that like earthquakes, when a pandemic strikes it only serves to amplify other structural weaknesses.

While Australia’s Theatre for Young Audiences sector is held in the highest esteem around the world, over the past 10 years, 25 youth arts organisations have lost their federal Australia Council funding.

Now, in a country of 4.7 million young people, we have just three federally funded theatre companies dedicated to young audiences.

It is perhaps helpful to think of young audiences as citizens with limited mobility and no disposable income. Deep-thinking, emotionally complex beings with a human right to art and culture, as makers and audience.

There are endless conclusive reports about the power of art in the educational and social success of children, but decades of independent research have failed to refocus government attention on the economic, social and educational “added-bonus” boon that this sector offers.

Children and young people are also the audience of the future. So, when Australia invests millions of dollars in a theatre or concert hall, we should plan to be reaping the benefits far into the future.

At the moment, arts investment in Australia is an inverted pyramid, with the largest investment going to companies presenting principally for an older audience.  As these audiences have paid a lifetime of tax, this seems reasonable. But if we hope to continue to have a thriving arts and cultural sector generating $110 billion dollars or more annually, we’d better make sure we have young Australians who are fiercely passionate about the arts, as makers and audience. 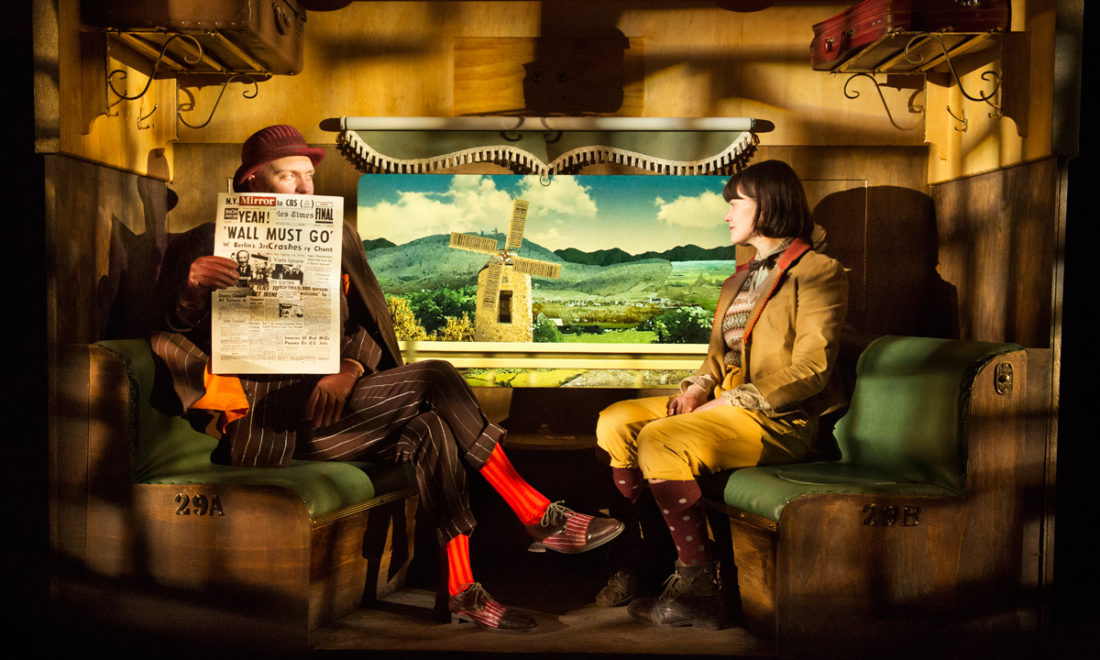 Pre-pandemic, Slingsby was set for a nine-week US tour with its show Emil and the Detectives. Photo: Andy Rasheed

In South Australia, the State Government must be applauded for its support of theatre for young audiences.

The four major Adelaide companies – Patch Theatre, Windmill Theatre, Gravity and Other Myths and Slingsby – are supported through Arts South Australia on multi-year arrangements, with each company performing locally and touring extensively internationally and nationally, creating significant employment and championing Adelaide as a creative and family-friendly corner of the world.

However, without federal co-investment, the stability of this distinctive cluster of world-renowned companies remains precarious.

The current pandemic will pass, but the fragility of our arts industry at the time of impact leaves essential building blocks of the sector at increased risk of crumbling.

It would be a tragedy if, during a future pandemic, a child in lockdown was to stumble across an online historical archive of the vibrant, world-class Australian youth arts ecosystem that is currently being deconstructed and defunded, and ask: “How did these incredibly beautiful things slip from memory?”

Andy Packer is the artistic director of Slingsby, a South Australian company dedicated to producing original theatre for young people and adults.