It’s generally assumed that no-one who assumes political power willingly gives it away.

The Premier has deftly (and wisely, for the most part) ceded both authority and responsibility for South Australia’s handling of the global coronavirus crisis to others – most notably chief public health officer Professor Nicola Spurrier and Police Commissioner Grant Stevens (or ‘Grantley’, as he’s better known via the formalities of his regular emergency directions).

Through the powers vested in Stevens as the state’s emergency co-coordinator – and further legislation rushed through parliament – the SAPOL chief has been handed authority greater perhaps than any public servant in SA history. It’s not merely that he’s above the law, but that he is the law – a sort of South Australian Judge Dredd, only with less arbitrary violence and more mandatory temperance.

If Stevens’s empowerment came from a legislative imperative, Spurrier’s was political – with the Premier repeating his mantra through those torturous early weeks of the lockdown that his every move was dictated by public health advice.

In doing so, he’s managed to make the pair effectively the most powerful figures in the state, while allowing them to wear the mantle as the architects of SA’s lockdown. 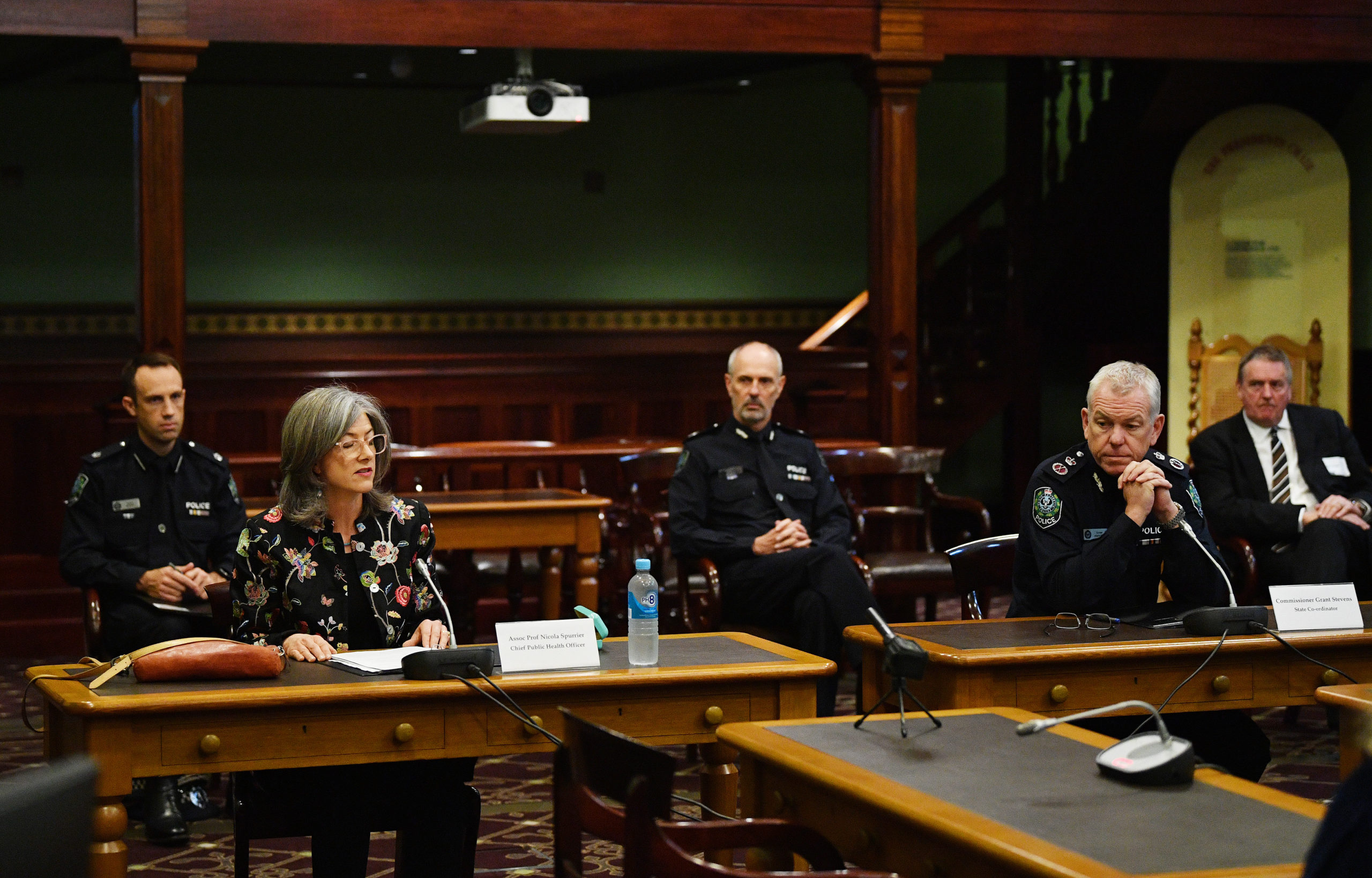 For, while it seems likely that SA, and Australia generally, has some innate social distancing mechanisms that have undoubtedly helped stop the coronavirus spread, there’s also no doubt that the state’s health result has been a triumph for the Marshall administration.

If we can’t yet claim victory in the proverbial ‘war’ on COVID-19, we can at least claim the first battle won.

And a timely win it is too, given the Government’s fraught 2019 had left it staring at a one-term exit, according to an Advertiser poll published as the coronavirus pandemic exploded – and which was consequently all but ignored.

It shouldn’t be forgotten that the measures taken by Marshall in those early weeks – swiftly committing funds (albeit with scant detail) for stimulus spending, bolstering the state’s health infrastructure, engineering stop-gap solutions to a desperate PPE shortage, imposing border restrictions (though, not, as he’d have us believe, border closures) – were decisive and important.

But neither should it be ignored that since then, he’s had arguably as easy a ride as anyone could get in government.

For several weeks, social distancing measures limited the number of reporters attending his daily media briefings, which correspondingly took on the air of an awards ceremony, with the Premier as MC, inviting Spurrier to the stage “to provide the daily update” on new coronavirus cases. 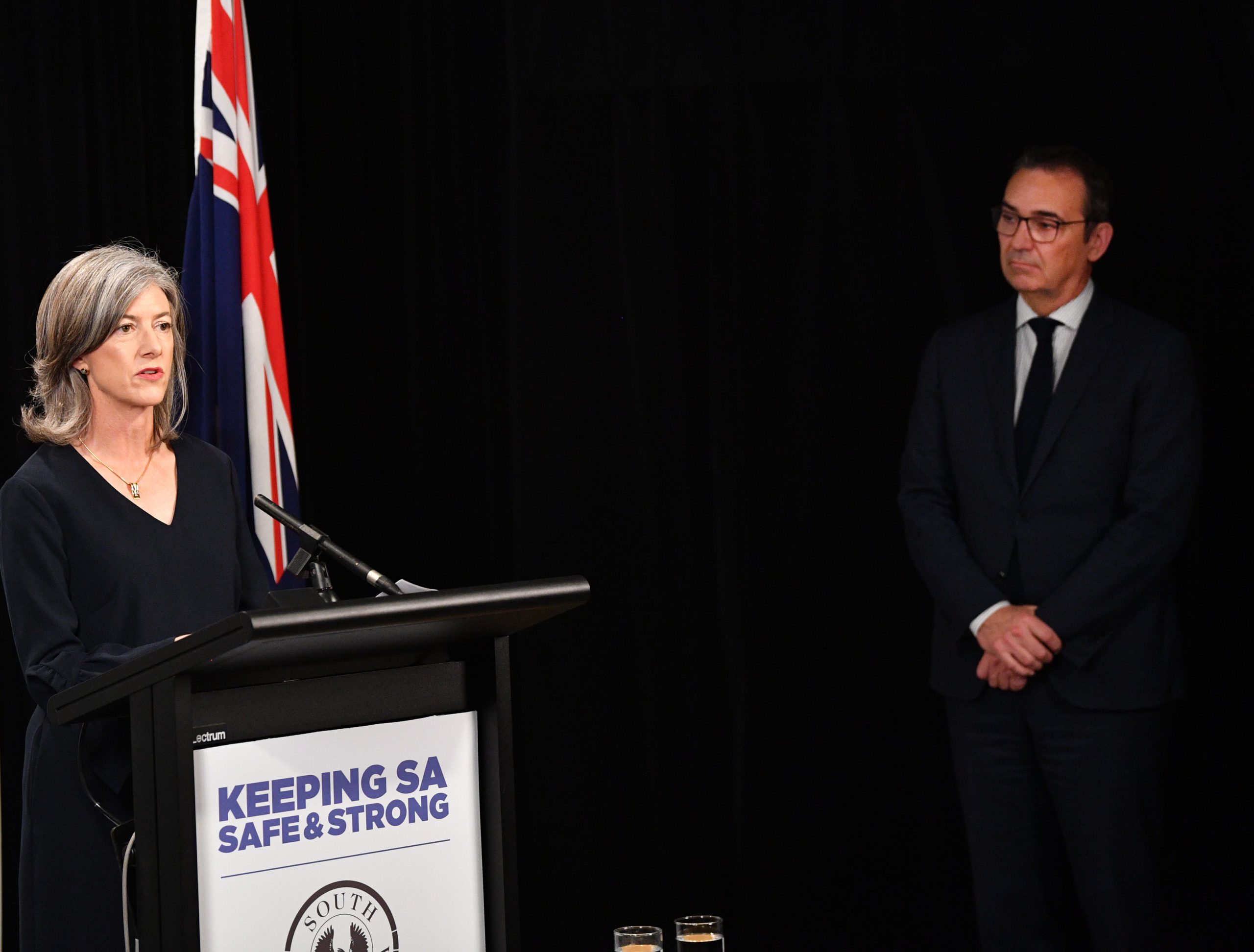 It later emerged that these new case numbers were for the previous day, and were known to health authorities from the night before, highlighting the fact that the regular showpiece, livestreamed daily at 3.15pm, was as much about showmanship as it was about disseminating information – which could have easily been posted online or distributed via email to media outlets several hours before.

Moreover, while many celebrated the apparent moratorium on politicking the crisis had invoked, the Liberals certainly made the most of their political opportunity – with the Premier hosting a series of COVID-19 Q&A sessions with (conspicuously) marginal MPs, to be pushed through their social media channels.

The Opposition was also at pains to point out that Marshall himself tended to front up to the daily caseload update on days there were low numbers to report – with higher spikes often reported by a lone SA Health talking head, or accompanied by his Health Minister Stephen Wade.

And all the while, the Premier has deftly insulated himself from any political chagrin, having remodelled himself as an affable public salesman for what he regularly labels “the health advice”.

Blink and you’d have missed it, but that mantra has subtly shifted in recent weeks.

That’s borne out by the recent creation of his high-powered Transition Committee, chaired by his own department CE Jim McDowell and including various bureaucrats, including Treasury boss David Reynolds as well as Stevens and Spurrier.

Effectively, the Transition Committee is the new power behind the throne – politically, it is the new authority to which Marshall hopes to defer government decision-making.

As such, it dilutes the hegemony of health, with Spurrier just one voice around a crowded table.

This must inevitably create a tension on the road to consensus.

“Certainly, there is no rule about how you measure those two things [health outcomes and economic outcomes] against each other here,” Reynolds conceded last week in a parliamentary committee hearing.

“Clearly, it is a judgement and they are not always aligned… as restrictions are lifted, the advice that I’m asked for is to say ‘which parts of the economy would most benefit?’

“Clearly, reducing restrictions brings risk in terms of the health outcomes… we try to choose one that has an economic benefit to it associated with the decision-making.”

We saw that tension manifest itself in recent days with the bizarre situation around reopening seated dining venues.

With most states taking steps towards reigniting their economies, SA’s were among the most tentative – allowing outdoor table service, but banning the sale of alcohol.

The rationale was charmingly classic Adelaide: alcohol can cause “disinhibition” and, according to Spurrier, make “people get a bit more relaxed about things”.

In other words, a few glasses over dinner might prompt people to forget we’re in a pandemic and start kissing, hugging and shaking hands all over the place.

The shortlived public abstinence was overturned last week with the edict that restaurants and cafes could open their doors to indoor dining (for up to 10 at a time), with alcohol service now part of the deal.

However, pubs and other venues that also offer meals were excluded from the plan, while moreover, SA’s complex array of liquor licenses meant several venues that ostensibly traded as restaurants were similarly banned from reopening.

The resulting mess had all the hallmarks of a decision-by-committee (which, indeed, it was): a nominally “principles-based approach” whose fundamental principle – that it is safe for up to 10 patrons to dine in and be served alcohol – was unevenly applied.

After strongly defending the status quo for two days as a deliberate “line in the sand”, Steven “Underpromise and overdeliver” Marshall returned without warning late on Friday and threw the doors open to all licensed venues to abide by the principle of the principles-based approach.

If it was a sign that political imperatives are increasingly becoming tripped up by health strictures, it wasn’t the first.

We know, for instance, that Marshall has twice publicly flagged a prescription for the AFL, only to have them stymied both times by his health authorities. The first, when he rejected the much-touted quarantine hubs proposal in favour of a ‘fly-in/fly-out’ model, prompted the bizarre situation whereby the AFL duly made a submission along the SA Premier’s lines – only to have it kyboshed by the SA Government!

History seemed to be repeating last week when Marshall pushed the AFL to hold a local Showdown, only for his health authorities to almost scupper the whole thing again when they refused exemptions for the AFL’s umpires to officiate proceedings – a roadblock only circumnavigated by the uncharacteristic flexibility of an increasingly desperate football league.

We know, too, that Steven “Underpromise and overdeliver” Marshall recently told a meeting of regional mayors he favoured bringing the second step of easing coronavirus restrictions back three days, from June 8 to June 5 – to allow the economy to kickstart at the beginning of the Queen’s Birthday long weekend.

Several insiders at the Zoom meeting confirmed the Premier suggested that wasn’t Spurrier’s position – but that he was strongly pushing the case for change.

It was another week before that shift was finally confirmed. In the meantime, Spurrier hardly gave the suggestion a ringing endorsement – indeed, she appeared to bristle when asked about it.

“These are the sorts of things we’ll continue to discuss,” she said a little over a week ago, adding after further questions: “Look, I don’t think it needs to be the focus of this press conference.”

Significantly, she conceded she had been so busy that “I actually hadn’t realised that it was a long weekend coming up” when the June 8 reopening was mandated.

That’s the kind of admission that would see many a politician pilloried; when Spurrier said it, it garnered nary a mention.

SA’s chief public health officer’s profile has blossomed throughout this crisis; with the SA public as the frightened patient, Spurrier’s public prognoses have assumed the folksy but no-nonsense bedside manner of a practised paediatrician (funny about that!), even if there was something a bit ‘let them eat cake’ about her recent suggestion that commuters concerned about crowded carriages could simply catch an earlier or later service, or drive to work instead.

Some punters have even suggested she should run for parliament herself, although I can’t see why such a move would appeal – she’s more popular, powerful and, presumably, better-paid without inviting the added scrutiny of political life.

The problem is, with Marshall having established her advice as the ultimate arbiter in the decision-making process, his constant refrain that “it’s going to be a lot easier to put restrictions in place than to lift them” becomes a self-fulfilling prophesy.

As Spurrier herself pointed out recently, “my job is to keep the health and wellbeing of South Australians at the forefront of my mind”.

Marshall’s job now is to balance that with the fact that the state’s economy – which was already flailing before the threat of COVID-19 reared its proverbial head – will require a Lazarus-with-a-triple-bypass recovery as it is buffeted by the headwinds of global recession, a trade war between our two key partners, our nation’s own botched diplomacy with China and our own perpetual reality as a small fish in a small pond.

If the health crisis was indeed a war, the peacetime social and economic challenge will require a broader focus.

We are still, despite SA’s own fortune, in the midst of a global pandemic. Missteps are allowed.

You’ve got to take the rough with the smooth, after all – and, when your so-called COVID-curve has been as smooth as South Australia’s the rough stuff is infinitely easier to endure.

But Marshall’s right – this next period will be infinitely more difficult to navigate – if only because he can no longer afford to cede ultimate authority to the health bureaucracy, and the past week has shown us the limits of handballing power to a panel of mandarins.

It must be the Government that makes, and wears, the decisions. Or we may end up in that unenviable position of winning the COVID-19 war – only to lose the peace.