On the final weekend of the Fringe, I was sitting at a table outside a bar off Rundle St – practising vague social distancing, as was the style at the time – when a passing State Government frontbencher tapped me on the shoulder and offered a warm handshake.

Half-joking, I pointed out that handshakes were out of vogue these days, so we settled for an amiable elbow-bump instead and he went on his merry way.

The city was still heaving, even if many who ventured out added a half-pace or so to their usual crowd spacing.

The messaging from state authorities at the time, however, was explicit: from the coming Monday, gatherings of 500 or more were to be banned, but if you held tickets for the festival festivities, go and enjoy yourself.

Be alert, but not alarmed.

The state’s chief public health officer, Dr Nicola Spurrier – someone most South Australians probably hadn’t heard of this time last month, but now hang on her every utterance – said she herself had tickets for an event that weekend.

“I’m not unwell and I feel comfortable attending,” she said at the time, albeit urging anyone who was feeling unwell “to not go to these sorts of public gatherings”.

That sort of messaging now feels like a lifetime ago.

It was the weekend before last. 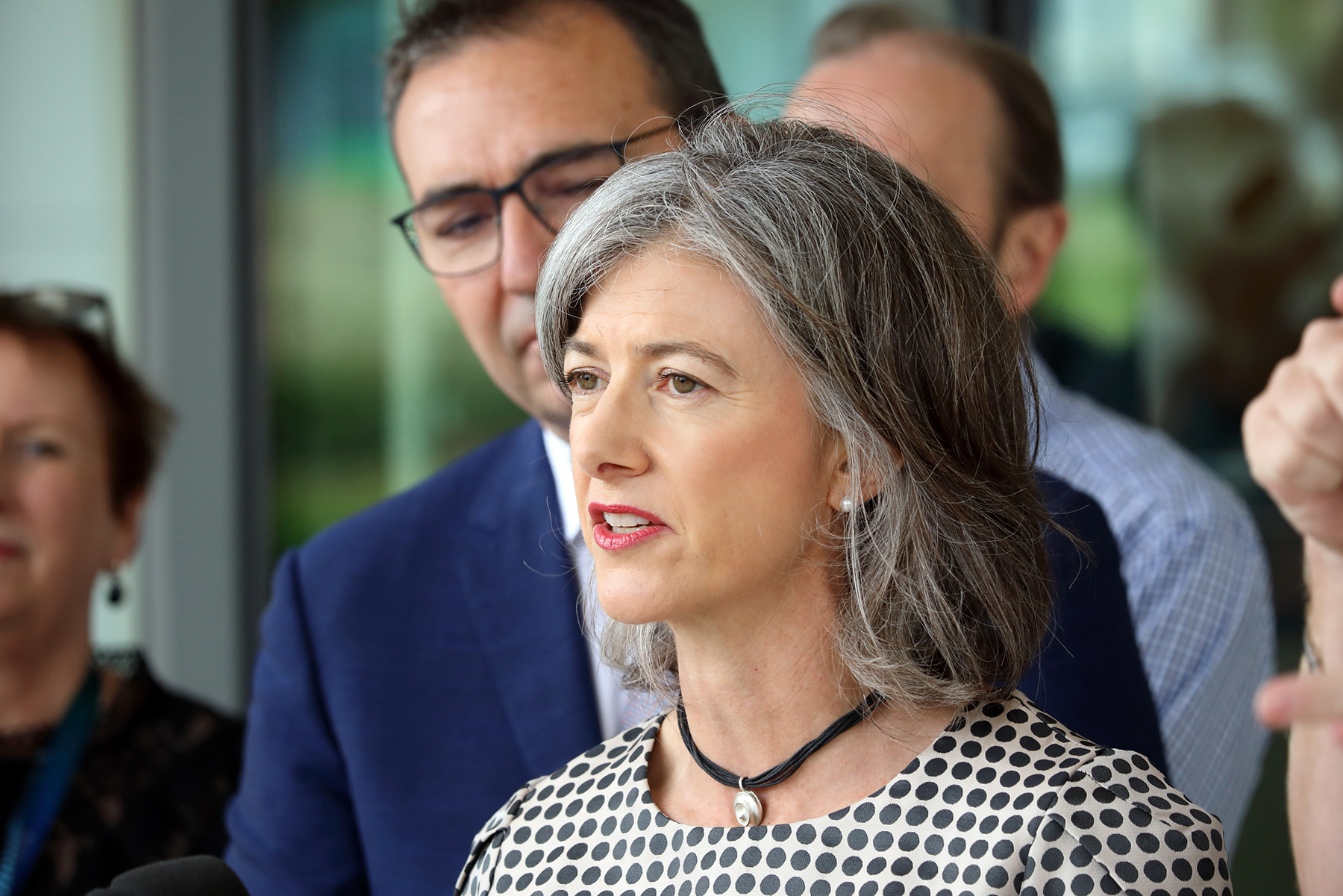 All of which just goes to show that even the authorities advising us, reassuring us, admonishing us, directing us, instructing us – even they are being swept along by the sheer pace of the coronavirus escalation.

In a mere fortnight, life as we know it has changed beyond recognition.

For many of us – though sadly, shockingly, nowhere near enough of us – the routines of daily life have been transformed into a dour grind of home-working, home-schooling and/or social networking.

And that’s those of us lucky enough to still have the job they had the week before last. And there are many, many more living with the fear that their livelihood will be upended, if it hasn’t been already.

But among the most marked and difficult of adjustments for a nation predisposed to a cynical suspicion of politics and authority in general is the basic need to learn to trust the things we’re told.

There’s a certain cruel irony to the fact that, having taken 16 years to get a sniff of power in South Australia, the Liberal Party now has the unenviable task of navigating an already flailing state through the biggest crisis in a century.

The flipside of that, of course, is the irony that having broadly opted for a fresh start, the SA populace has now entrusted its future fate to an administration with a mere two years on the job.

Steven Marshall, it must be said, has rarely looked stronger or more assured.

His chief public health officer Spurrier has proved a fairly adept media performer – unflappably adapting to the evolving nature of the crisis.

The Marshall Government came into 2020 after a meandering, ineffectual 2019, in which it allowed a minor cash grab to become a major political debacle (and ultimately a net budget drain), failed to progress several key pledges and during which the state’s economic and employment metrics took a hammering – even before the bushfire and COVID-19 crises of recent times.

Then there’s SA Health – the agency entrusted to see us through this epic emergency, an era Marshall has already flagged as the likely “toughest six months of our lives”.

As recently as December, an ICAC report described SA Health as “an environment where personal interests are preferred at the expense of the public interest”, with a culture characterised by bullying and intimidation where staff experience “more instances of corruption and feel more vulnerable to corruption than the rest of public administration”, and with a records management system in which “important documentation either does not exist or cannot be found”.

On the other hand, Spurrier – who, to be very clear, has nothing to do with the ICAC’s systemic concerns – exudes competence, and Marshall repeatedly defers to her expertise as the foundation for his Government’s every move on the health response.

But the fact remains, she is a recent appointment, made under this administration. Less than a year ago, as deputy chief public health officer, she was warning South Australians to watch out for wild mushrooms.

Now she’s calling the shots during the biggest upheaval of our time and, via her default membership of the Australian Health Protection Principal Committee, shaping the national response as well.

None of which is pointed out to undercut or undermine confidence in the Government’s response – but to point out the magnitude of the public’s necessary leap of faith. Particularly with notable voices, such as former head of Trauma services at the Royal Adelaide Dr Bill Griggs, openly questioning the current national response.

It’s a good sign that Marshall, who appeared so diffident through much of last year’s political travails, has discovered a newfound clarity of purpose under pressure.

The problem is, we have to trust that that clear purpose is the right one.

Last week, he was uncharacteristically unequivocal when he insisted: “Students must remain at school” and “discouraged” parents unilaterally keeping their children home.

Despite almost two decades of professional cynicism about what politicians tell me, as a father of two young kids, I was reassured by the forthrightness of his response. As I suspect were many other parents, who had no doubt spent many hours of the preceding days in anxious, even tearful, conversations about whether to send their kids to school – and the ongoing upheaval of choosing not to.

Yet, as the days rolled on, the clarity became clouded. Other states took a different tack, until it seemed it was merely Marshall and Scott Morrison pushing the line that the schools must remain open, and students must attend.

And then, as recently as yesterday, Marshall’s own Education Minister John Gardner walked back the Government’s insistence that keeping kids at home was counter-productive, announcing a roll-out of online home learning tools, and saying: “If you are capable of supervising your child at home so they can learn from home, we are now supporting you to do so.”

Little wonder the Opposition, in its own peripheral way, pondered whether the Government’s health advice on schools had changed (it hadn’t – and, it should be noted, the concern over schools remaining open has only ever been about whether children are likely to transmit the virus, given young people have been seen to be broadly resilient to COVID-19).

The Opposition too, as an aside, have had their grand plans thrown into disarray.

A few weeks ago, a News Corp poll had Peter Malinauskas well-positioned to lead Labor from Opposition after just one term at the 2022 election. Now, all of a sudden, politics has become irrelevant.

While it’s hardly a good time to be in government, it’s not a great time to be criticising the government either, and the public’s already tenuous tolerance for the Machiavellian mechanics of politics-as-usual will be razor-thin.

And yet, the Marshall Government has taken a strangely political approach to the coronavirus crisis.

In some ways, it’s treating it like an election campaign: Marshall’s regular and cloying references to his “strong plan”, for instance – the catchphrase of his 2018 breakthrough offensive – and the daily news drops to the News Corp press.

The regular reassurances that SA remains “ahead of the curve” have the whiff of salesman shtick about them – and it’s at least arguable that reassurance can lead to insouciance – which is the last thing we need.

But perhaps we should be heartened by this much: that Marshall was never better at selling hope than during the 2018 election campaign, and hope is desperately needed now.

As long as it’s not false hope.

For the Government will also need to sell an electorate unaccustomed to listening to its elected representatives on a new, and dramatically curtailed way of life.

On an economy with burgeoning unemployment queues, a budget laden with debt and deficit and an uncertain future with major trading and tourism markets cordoned off.

If that’s a towering challenge, the one facing the electorate is harder still: not merely to navigate it all, but to learn to put aside its well-worn cynicism and adopt a modicum of faith.

But, for now, it’s necessary – because we’ve never needed our institutions of government as much as we will need them for the foreseeable future.

So, for now, we all need to get along.