Bridget McKenzie has resigned, insisting – and the Prime Minister and his departmental head agreeing – that she did nothing wrong in distributing the community sports grants beyond not declaring her membership of one shooting club, and not managing a conflict of interest in relation to another shooters’ association.

Let us look at this very calmly, one step at a time.

Too fast? Let us slow it down even further.

As I wrote last Thursday, the money for these community sport infrastructure grants was allocated by the Budget – that is, by legislation passed by the parliament – to Sport Australia.

Sport Australia is the trading name of the Australian Sports Commission – a stand-alone corporation created by parliament. So Sport Australia is a legal ‘person’. It is the owner of money given to it by parliamentary authorisation, just as you or I would be the owners of any money the parliament said we could have. It decides how to spend it, in conformity with the purposes for which parliament authorised the allocation.

Sport Australia made this point in June 2018, before the guidelines for applications had been settled and published. Despite this, when those guidelines were published, on August 2, 2018, there was a line saying that the Minister would be the final approver of grants, and factors other than those set out in the guidelines might be applied.

As it turned out, and as we all now know, the relationship between the Minister’s grants and the results of scoring applications against the guidelines did not go much beyond the fact that all the eventual grantees were technically eligible.

The Auditor-General noted in his critical analysis that the cut-off score – if the assessments against the published guidelines had operated – would have been 74 out of 100. In the event, 417 grants – 61 per cent of the total – went to projects that scored less than this.

This difference, and the details within it, is what has got the government and Senator McKenzie into so much trouble.

But no, says the Prime Minister, apparently quoting from parts of the report given to him by his departmental head Phil Gaetjens on the ministerial standards issue: while opinions might differ about the fairness of some of the grants, the Minister had a discretion and she exercised it.

Did she, now? Back to the Auditor-General and the Australian Sports Commission Act – the legislation that creates Sport Australia as a legal entity. Section 11 of that Act requires that, if the Minister is going to tell Sport Australia what to do or how to do it – including how to dole out its grant money – the direction has to be in writing, published in the government gazette, and tabled in parliament.

What is more, before any such written direction can be given, the Minister has to write to Sport Australia saying such a direction is being considered, and then give the chair an opportunity to discuss the need for a formal direction.

And what did the Auditor-General have to say about that? Here it is, direct from the report:

Were there any discussions between the then Minister McKenzie and Sport Australia chair John Wylie in which it was agreed that there was no need for a direction, because Sport Australia was prepared to go along with what she wanted?

No-one has suggested such a thing, but the Auditor-General seems to be saying, in effect, that it would have been no help to her anyway, because Sport Australia had no independent power to transfer its responsibility for spending the funds allocated to it.

Under the Act, it does have power to delegate its specific powers and functions to a named list of people, but the Minister is not on that list. 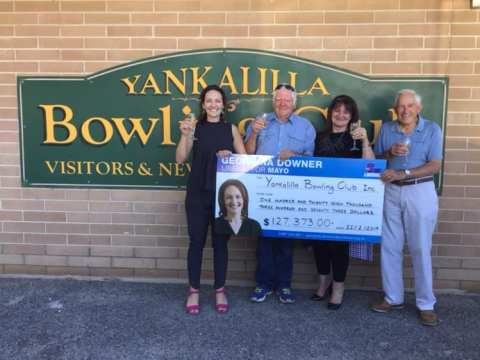 Does anyone seriously believe that the Auditor-General would carefully say there was no legal authority evident to him that the Minister was able to be the approver of all those grants if he was not very sure of his ground? After all, this is the first question in any performance audit: what was the line of power and authority to spend the money?

The point is this: on the Auditor-General’s carefully expressed understanding of the facts it would not matter if there was not a trace of complaint about the details of how Senator McKenzie decided to spend the money. It was not hers to spend.

But no, says the Prime Minister breezily, Christian Porter reckons that is not right, so let’s not trouble our little heads about that one any more.

We are left to guess at how Porter arrived at his unexplained contrary conclusion. There may be hints, though, in the emphasis given during the press conference to the fact – previously mentioned – that the published guidelines for applicants for grants under this program clearly set out that the Minister would have the final approval of grants, and might take account of “other factors” than the application criteria set out in those guidelines.

(The details are here, for anyone who cares to wade through the transcript of his press conference yesterday afternoon.)

But there is a problem about this. It looks like a lifting-yourself-up-by-your bootstraps argument. If Sport Australia can be formally directed by the Minister, but apart from that it has no power to outsource its responsibilities to the Minister, then simply reciting in the program guidelines that the Minister will decide does nothing, because there is no power to make that call.

Never mind, says the Prime Minister. Let’s just cheerfully wave that little problem away and prattle on about those pesky memberships, and the sad and harsh realities of having to maintain standards.

Maintaining standards? What standards? The Ministerial Standards are in a public document. They say Ministers must observe fairness in making decisions, but all anyone will concede here is that “opinions may differ” about the fairness of the distribution of the grants.

Bridget McKenzie may have at last fallen on her sword over a convenient side-issue, but the government’s troubles are far from over.

It seems the government hopes that quiet Australians will not trouble themselves too much about any of this, or about the half-baked assertions that it was all OK. I never thought the day would come when I would say that perhaps the government needs to take a closer look at the opinion polls, but hey, that day has arrived.

And what are we to make of the announcement on Sunday morning by Treasurer Josh Frydenberg that disappointed applicants for what turned out to be the McKenzie slush fund may be mollified by a new funding program in which the processes and documentation will be very different?

Is it too cynical to ask if it will be a condition of accepting such funds that sports organisations waive any legal rights they may have against the government for the unauthorised handling of their previous applications? Is it too cynical to think that this manoeuvre has the whiff of a pre-emptive settlement offer against the threat of a class action?

After all, people involved in that sort of litigation have the power to winkle out an awful lot of the other side’s inconvenient documents in pre-trial manoeuvres.

And they are not the only ones. There is a deal of enthusiasm within the Senate for an inquiry into this affair, after having a little nibble at it in the estimates committee scrutiny last October of the budget, and Senate committees also have pretty significant powers to compel the production of documents and the appearance of people.

Already some people in the media have had access to documents pointing to the involvement of others. Much more might be revealed of the involvement of others in this whole sorry episode, which began with a derisory dribbling-out of $29 million in Scott Morrison’s 2018 budget as Treasurer – a sum which  was supplemented twice within the following year to bring it up to the $100 million that everyone knows about.

Bridget McKenzie may have at last fallen on her sword over a convenient side-issue, but the government’s troubles are far from over.

The tribulations of President Richard Nixon after 1972 have until now been regarded as a salutary warning that the original bad act will give you much less difficulty in the end than the things you get up to while trying to limit and contain the damage. We have a government of slow learners.

Michael Jacobs is a freelance writer, and has been a political journalist, including time in the federal parliamentary press gallery, and a lawyer.