Documents, disclosed under Freedom of Information laws, had revealed that McGowan was listed as the director of the major not-for-profit company’s subsidiary, Silver Chain Corporate Services, during the early months of his public appointment.

Silver Chain Group had won a $13 million contract with the department during that same period.

But the Premier declared he had no intention of forcing McGowan to step aside while the matter was investigated – let alone resign – “because we just don’t believe that this has met any threshold whatsoever”.

Marshall repeated the media statement SA Health had provided to InDaily earlier that day, explaining that: “an administrative error by Silver Chain led to a delay in changing officeholder details on a non-operational dormant subsidiary company of Silver Chain”.

“As soon as Silver Chain identified the administrative error, the directorship details were updated.

McGowan, “out of an abundance of caution”, had asked the Commissioner for Public Sector Employment Erma Ranieri to review the issue.

Ranieri, who had been involved in McGowan’s recruitment, promptly announced she would appoint someone independent to investigate.

Since then, the Opposition has produced documents, obtained under Freedom of Information laws, showing that McGowan initially agreed to a meeting to discuss “partnerships” involving SA Health and Silver Chain, during the period he was registered as both company director and department CEO – but he cancelled the appointment “as it could be perceived as a probity issue”.

This, on top of the fact that McGowan told a parliamentary committee in 2018 that he’d signed off a taxpayer-funded contract awarded to Silver Chain Group – and told the same committee last month that he has nothing to do with awarding contracts to the company.

Here he is, in the transcript of the July 23, 2018, Budget and Finance Committee:

He pointed out during the hearing that he had no pecuniary interest in the company.

Here he is, addressing the October 28, 2019 Budget and Finance Committee:

We’ve included the full transcript of those hearings at the bottom of this article for full context.

He said McGowan had, in fact, “endorsed” the expenditure of public money towards Silver Chain’s South Australian arm, RDNS SA: once in November 2018 and, on another occasion, in May 2019.

And in July this year, said the Minister, McGowan gave financial approval for the “Long Stay Patient: Short Term Transition to Discharge Project”, which was later awarded to RDNS without the executive’s further involvement.

Nonetheless, said Wade: “Yes, I do have confidence in Mr McGowan”.

The Opposition also points out that McGowan attended several Liberal Party fundraisers – including one in June 2017 – despite telling a parliamentary committee he didn’t recall attending any such event in the lead-up to the March 2018 state election.

But “in the lead-up” isn’t a strictly defined concept, and SA Health said in a statement this week that McGowan “responded correctly to the questions as he did not attend any State Liberal Party fundraisers in the lead up to the 2018 state election”.

Labor Health spokesperson Chris Picton used parliamentary privilege this week to accuse McGowan of lying to the committee and attempting a “cover-up”.

But the reality is – as Steven Marshall is wont to say – the Premier alone is capable of forcing direct accountability on the SA Health CEO, whatever the outcome of the Commissioner’s outsourced investigation.

And Marshall has every interest in keeping McGowan in the top job, for practical reasons – SA Health has enough problems without losing another CEO – as well as political ones.

However, if there is any element of McGowan’s conduct that might force Marshall’s hand, it’s his handling of an obscure aged care pilot program, coming soon to Adelaide’s southern suburbs.

McGowan’s interventions in the fate of the Integrum Aged Care+ pilot program – with its laudable aim of helping older people maintain a high quality of life in their own homes – seem to me the clearest evidence, published so far, of conduct that could plausibly threaten his ongoing role as SA Health CEO.

McGowan promoted the program in its original, Western Australian incarnation, while he was Silver Chain Group CEO.

Here he is, quoted in an article on Silver Chain’s website, entitled ‘Silver Chain set to launch innovative service’:

McGowan is also listed as the author of this article, in the Spring 2017 issue of an online magazine published by public relations firm Wells Haslem Mayhew: 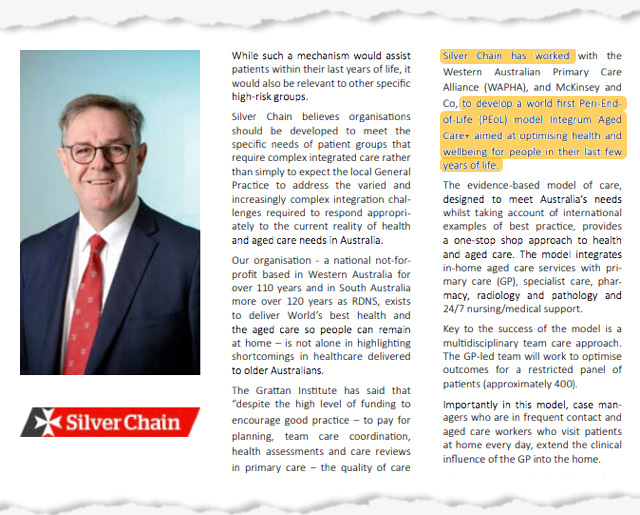 Silver Chain Group is listed as one of the PR firm’s clients in the magazine.

After he started as SA Health chief executive in May 2018, McGowan repeatedly involved himself in assessing the merits of the Integrum program, according to documents released under Freedom of Information laws to the Opposition and provided to InDaily.

Here’s an email from Silver Chain acting CEO Lyn Jones, sent to McGowan in his role as SA Health CEO on June 26, 2018, confirming “our telephone conversation today in which you advised that the Department intends to defer the Integrum Aged Care+ pilot program in South Australia by a further six months”. 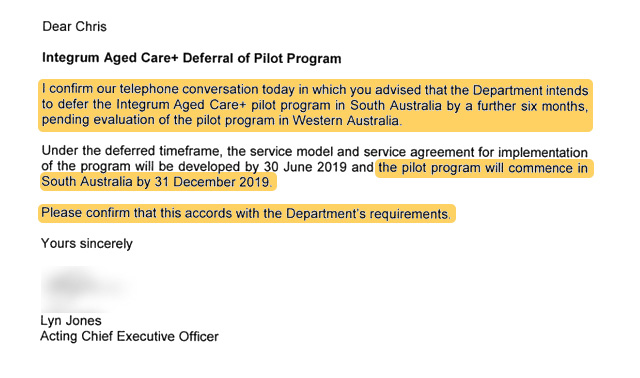 And here’s an extract from McGowan’s diary, which says he attended an “Integrum Aged care site visit” in Western Australia in February this year: 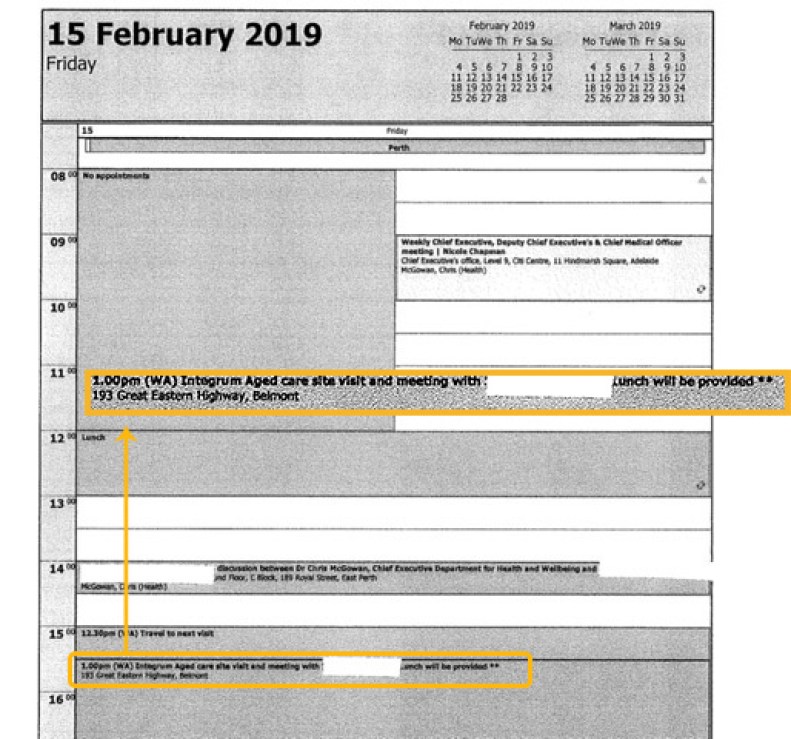 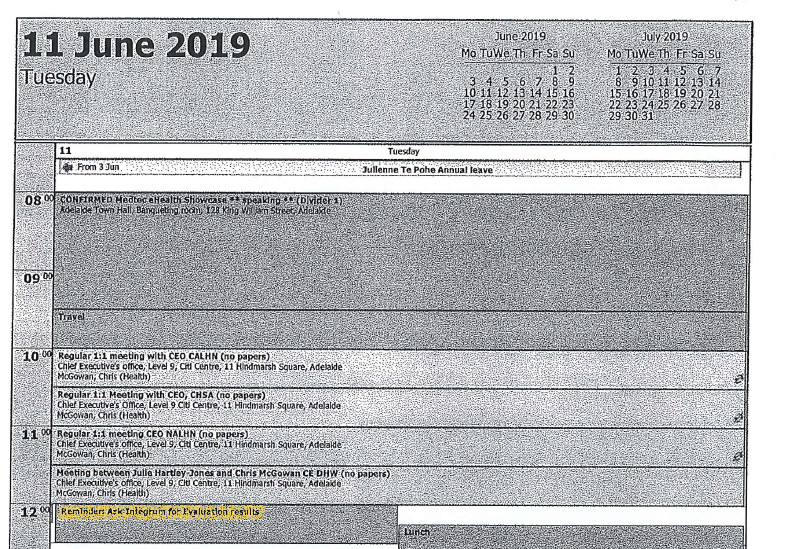 And it’s Dean’s signature that appears on the contract, executed less than a fortnight later, handing over $2.63 million in taxpayer funds to Silver Chain Group on behalf of the Health Minister, to implement Integrum in Adelaide.

Given what McGowan has said about avoiding direct dealings with Silver Chain, it’s difficult to imagine how he would seek to justify these interventions.

InDaily sent a series of questions about McGowan’s involvement with Integrum yesterday, but he declined to comment.

Consider what McGowan, himself, says about probity.

He told the parliamentary committee last month that he does not involve himself, in any way, in decisions about awarding contracts to Silver Chain “because of the perception” it would create.

“We made a decision very early that I would stay well away from that,” he said.

A member of McGowan’s staff declined a July 2018 meeting invitation to discuss “partnerships” involving SA Health and Silver Chain, on the executive’s behalf, like this: 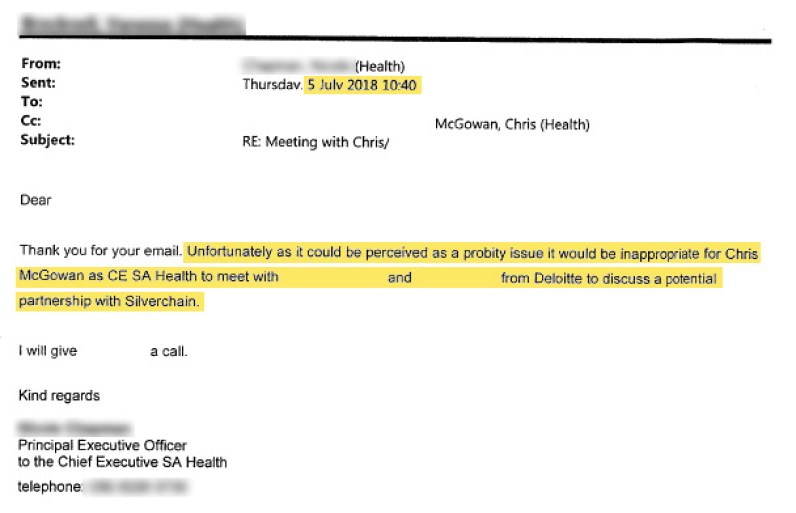 And consider what the Public Service Code of Conduct says about actual or potential conflicts of interest (albeit not perceived conflicts): 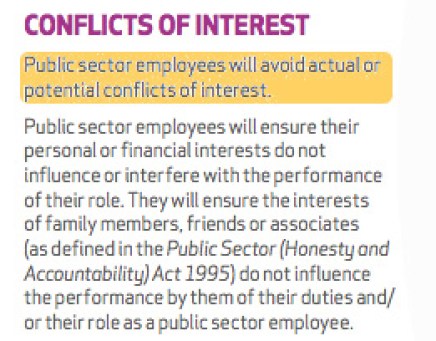 Silver Chain’s Integrum program is due to begin work in Adelaide’s southern suburbs next week.

Bension Siebert is a reporter with InDaily. Digital images of documents by Paige Mewett. Read transcripts of McGowan’s evidence to the Budget and Finance Committee below.