A major exhibition of works by South Australian Aboriginal artists will open in France next October, coinciding with Tarnanthi 2020 in South Australia. It will feature important works by artists from the Aṉangu Pitjantjatjara Yankunytjatjara Lands, shown at Tarnanthi 2017 and held by the Art Gallery of South Australia, augmented by significant new works by APY artists.

Its centrepiece will be a work that many Adelaideans will remember as a signature work of the 2017 Tarnanthi festival – an outstanding installation called Kulata Tjuta, meaning “Many Spears”, which comprises 550 spears arranged like an atomic explosion suspended in mid-air above hand-carved piti (wooden bowls). It tells of the devastating impact on Aṉangu and their country from atomic testing in the 1950s and ’60s. 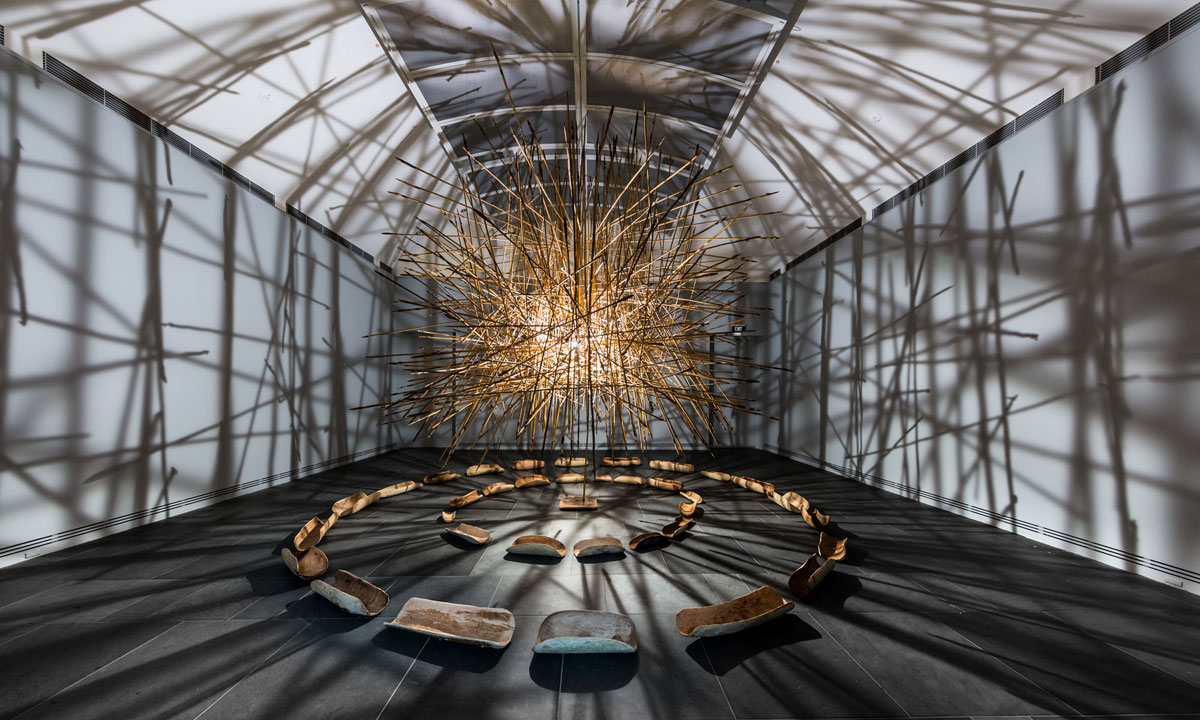 The exhibition, negotiated by the State Government, will occupy an entire floor of the Musée des Beaux-Arts in Rennes, the capital of the Brittany region of north-west France, where South Australia is developing its submarine-building expertise.

It promises to capture the imaginations of European audiences in the way that Tarnanthi does at home. Year after year, audiences here flock to Tarnanthi knowing they will encounter remarkable works of contemporary Aboriginal and Torres Strait Islander art, witness thrilling performances and hear inspiring artist talks.

On this year’s opening weekend alone, almost 15,000 visited the Art Gallery of South Australia to see Tarnanthi’s main exhibition, and many thousands more have visited dozens of exhibitions at partner venues across the state or bought works of art at the popular Tarnanthi Art Fair. Five thousand students are booked to visit Tarnanthi over its three-month season at the AGSA.

Hollywood actor and comedian Steve Martin – a keen collector of Indigenous art – also visited the gallery last week specifically to view its Tarnanthi showcase and expressed his admiration at the level of innovation shown. 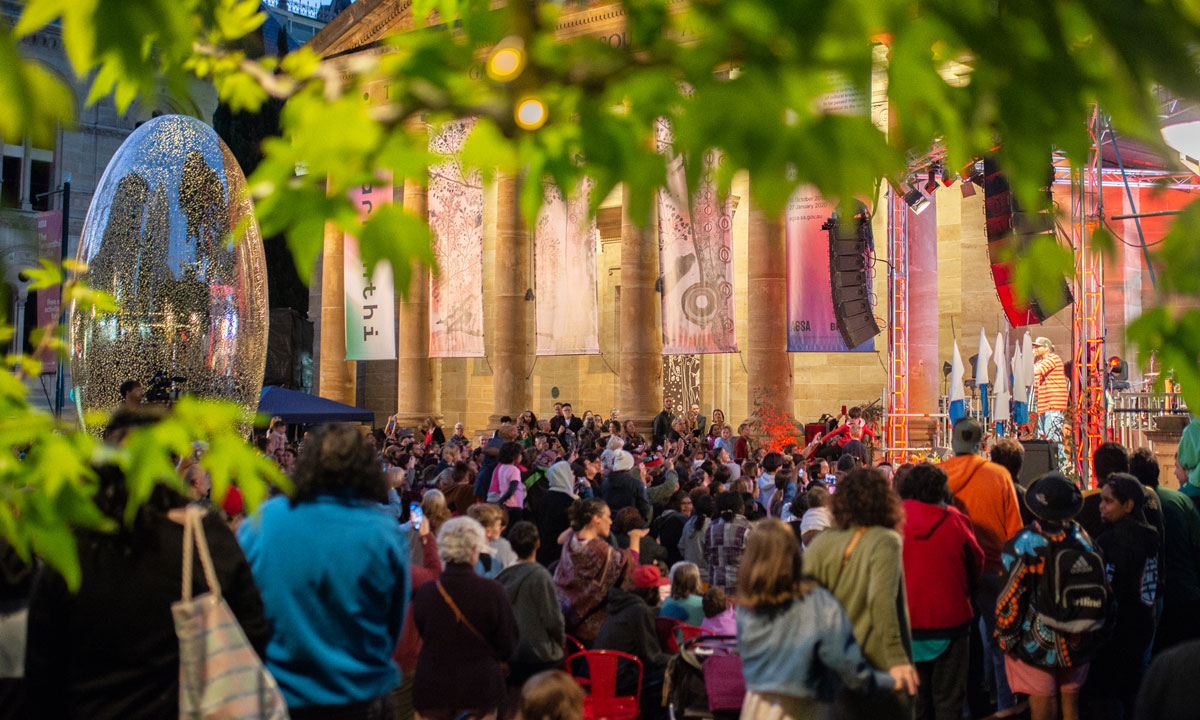 Tarnanthi helps to shape understanding of our nation’s diverse cultures.

As the largest festival of its kind in Australia, it also showcases artists at a national level, and increasingly at an international level. However, these far-reaching impacts sprout from a local and personal approach.

Tarnanthi fosters art and the people who make it. With the motto of “let the artist’s voice shine”, it puts artists at the centre of every project. It nurtures artists’ visions and encourages them to dream big, then provides practical support as they turn ambitions into realities. It assists artists as they tell their stories through art, and affirms the importance of their local stories by presenting them at a nationally important festival.

This supportive approach empowers individuals and encourages communities across the country as they create opportunities through art.

Its local reach is considerable. More than 1200 artists nationwide have produced works of art for Tarnanthi 2019 – more than in any previous Tarnanthi Festival. Almost 50 art centres across the country participated in the Tarnanthi Art Fair, which this year generated more than $1.2 million in sales – all of which went directly to artists and their communities.

Since Tarnanthi began in 2015, its supportive approach at a personal and local level has helped to produce many works of national merit. The festival has propelled hundreds of artists onto the national stage and fast-tracked careers. And for audiences, it broadens our view of the diversity and dynamism of cultures in Australia and deepens our perspective of who we are as a nation.

Countless works by Tarnanthi artists have also been displayed overseas or have entered international collections – sharing Aboriginal stories with global audiences and widening appreciation of Aboriginal art, culture, knowledge and experience. An example is one of this year’s feature displays, Dhawut, which means “fly away” –after its national debut at Tarnanthi, this selection of striking contemporary Yolŋu bark paintings will “fly away” to tour the United States, then enter the finest collection of Aboriginal art outside Australia, the Kluge-Ruhe Aboriginal Art Collection of the University of Virginia.

Tarnanthi’s Brittany exhibition now presents an exceptional opportunity on a grand scale not only to share with the world the vitality and creativity of contemporary Aboriginal and Torres Strait Islander art and culture, but in particular to tell the world of Aṉangu stories through Aṉangu art – home-grown art and stories from South Australia, from a South Australian festival of art. The scores of Aṉangu artists whose works will visit France should feel rightly proud and deserve our heartfelt congratulations.

Through art, Tarnanthi articulates a message about the depth of culture in this land

As well as being a cultural exchange, the exhibition will also be a meeting of languages – with works of art from a land where Pitjantjatjara, Yankunytjatjara and English are spoken, presented in a region that speaks French and its own distinct Breton language. However, the lingua franca there will be art.

Art is an international language because it expresses essential elements of what we share in common as humans. It transcends the spoken word by communicating through the beauty of its craft and creativity, the rawness of its emotion and the simple radiance of its ideas.

As Tarnanthi shows, art can communicate across cultures and across continents. And through art, Tarnanthi articulates a message about the depth of culture in this land – a message that shapes lives locally, attitudes nationally and, increasingly, awareness internationally.

Nici Cumpston is artistic director of Tarnanthi and curator of Aboriginal and Torres Strait Islander Art at the Art Gallery of South Australia. The 2019 Tarnanthi exhibition at the AGSA continues until January 27, 2020.