Moreover, he’s had such a charmed run it can be easy to assume that he’s barely made a political misstep in that time.

But it’s worth remembering that the Labor leader’s political acumen remains relatively untested.

That will change this week.

Labor is very much the centre of political attention ahead of this week’s land tax debate, and it’s not overstating things to suggest that the Opposition’s approach could have far-reaching political ramifications, if not policy ones.

But the very fact Labor is now the focus of the debate – that the Opposition has found itself in the spotlight after a Liberal own goal – illustrates that the party has already erred.

The most logical explanation for why it’s hard to see Labor blocking the land tax Bill is: it’s exactly what the Liberals would have done in Opposition

It has tried too hard to traverse both sides of the road: to make political capital from the Government’s discomfort while refusing to enunciate its own position.

Malinauskas insists he has not painted himself into a corner by holding a series of public forums, in which a succession of affected investors can stand up and give voice to their anger, frustration and in some cases abject fear.

He says he will never regret consulting with stakeholders on a public policy issue.

However, it was clearly an error to publicly pin Labor’s still-forthcoming decision to the feedback from that consultation.

“We won’t vote for legislation if we genuinely take the view it’s going to be bad for people and small businesses [so] we’re going to go and find out what the real truth is, and hear from the people directly affected,” Malinauskas said back in September, a day after Lucas’s draft Bill went out for consultation. 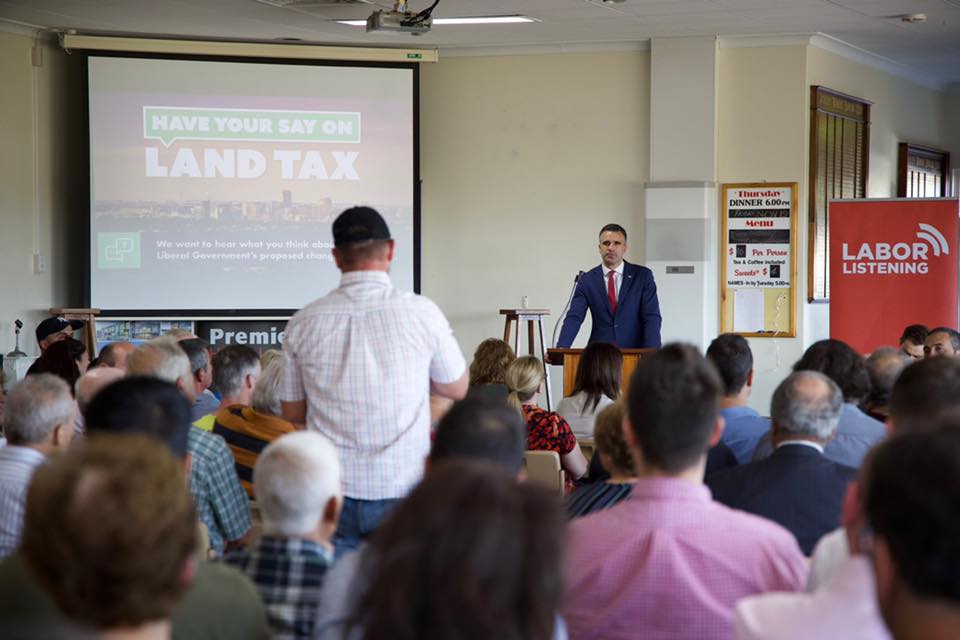 Except that the Opposition Leader has now heard from those directly affected – and the response was emphatic.

Which means, by his own rationale, he has no choice but to block the Bill (noting that significantly modifying it would be much the same outcome, given Lucas has threatened to crash through or crash on his aggregation measure).

That’s certainly the impression among those that attended the various functions, one of whom summed up the prevailing mood with this post on Malinauskas’s Facebook page: “I’ve never been a Labor supporter, but am encouraged by your efforts and the passion in your presentation… it’s now time to win some new supporters by publicly opposing this Land Tax Aggregation that the Libs are proposing.”

Instead, though, Malinauskas is only now publicly suggesting that blocking the Bill is a worst-case proposition, pointing out – as he did last week – that it would be unprecedented for Labor to “block a money Bill of this nature in the Upper House”.

Which, as I noted two months ago, could have been the default position from the get-go.

That way, Labor could have embarked on its listening campaign from the perspective of a party that is bound by the stricture that money bills are sacrosanct – but still willing to hear the arguments and with the outside prospect of being persuaded to abandon a tradition that’s been kind of a big deal from the ALP since the dying days of the Whitlam era.

Of course, the party’s Upper House leader Kyam Maher probably wishes he could take back his intemperate rhetoric of a couple of years ago when, after the Liberals opted not to pass the then-Labor government’s similarly contentious Bank Tax, he told parliament: “There is no part in any budget that will be safe from vandalism by a future Labor opposition.”

“If this precedent is set that an Opposition feels at liberty to pick large pieces of the budget apart, that will be something that Labor in opposition will remember and take full advantage of,” he said at the time; an unfortunate sentiment not merely because it ends awkwardly on a preposition but also because it appears to lock Labor into a particular course.

There is an argument, of course, that while the Land Tax changes were flagged as part of the June budget, the actual legislation is a standalone Bill – albeit one formally designated as a ‘Money Bill’ – which could thus be considered as distinct from the Budget.

Indeed, the Marshall Government itself has never been at particular pains to argue that the land tax legislation is a budget Bill.

Which could well be because, politically at least, it would be far better for the Marshall Government if its Bill is defeated.

Sure, there’s some short-term embarrassment in failing to get a key piece of legislation passed.

And sure, Lucas will need to find some other way to cover the budget shortfall if his $86 million aggregation measure is stymied.

But with still more than two years before the next election, getting one of the Government’s most unpopular measures off the agenda would be a godsend for the Liberals.

Indeed, perhaps the most logical explanation for why it’s hard to see Labor blocking the land tax Bill is this: it’s exactly what the Liberals would have done in Opposition.

And the Liberals were in Opposition for 16 years. 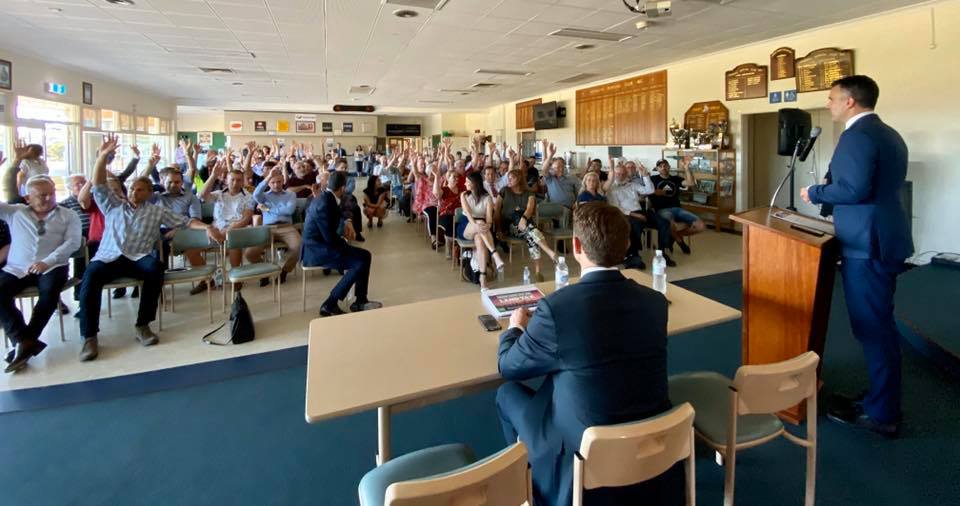 Labor has made some political capital out of broad opposition to the land tax changes among historically Liberal voters. Photo: Facebook

In fact, not only would they have done it – they did do it. More than once.

First in 2014 with Labor’s ill-fated and unpopular ‘car park tax’, which was to raise $121 million over four years.

Then, three years later, with the $90 million-a-year bank tax.

That was roughly the same amount as Koutsantonis was already reaping by having scrapped a remission on the Emergency Services Levy – a measure the Liberals long pledged to reinstate if elected.

Which means that by the time they finally won office, the Liberals had already cost themselves around $850 million in revenue over the course of their first term – all of which could have been blamed on the former Labor administration.

The Libs, then, are kind of like the political embodiment of that old gag about a guy caught in a flood of Biblical proportions, who prays to God to save him. A man in a row-boat floats past and offers to pick him up. “No thanks, I have faith that God will save me,” he replies. As the water rises, a motorboat turns up, whose driver offers respite. “No thanks,” he replies again, “I have faith that God will save me.” Finally, as the waves engulf, a helicopter appears overhead and a rope is lowered. But his reply is the same.

When he duly drowns and arrives in Heaven, he tells God: “I had faith that You’d save me, but You let me drown!”

God replies: “Mate, I sent you two boats and a helicopter, what more did you want?!”

Which is kind of the bind in which Rob Lucas now finds himself, having eschewed the revenue from a Labor-imposed car park tax, bank tax and ESL, and instead spending the best part of six months drowning under his own political fix, and alienating half the Liberal base in the process.

No doubt some in the Labor camp will be enjoying the irony that the aggregation measure, a $86 million-a-year revenue raiser, is almost exactly the budget boost the Liberals denied themselves by opposing the Bank Tax.

Moreover, while that whole episode was a messy one for Labor, few in the party wouldn’t have been relieved that they weren’t forced to fight an election on the issue, with their opponents backed by the financial heft of the banking sector.

The Libs in Opposition consistently failed to heed the advice generally attributed to Napoleon Bonaparte, advice paraphrased to me more than once last week: “Never interrupt your enemy when he is making a mistake.”

Malinauskas though, has sought the high moral ground in this debate by seeking to hear firsthand the personal and broader economic impacts of the looming aggregation crackdown.

In so doing, he has put the spotlight on a significant test of his own leadership.

On moral grounds, he appears duty-bound to block the tax.

On political grounds, it’s a no-brainer to pass it.

And in 16 years of Labor government, I can’t recall too many times they put political expediency second.

But there’s a first time for everything.