In Part I we ignored some of the world’s lesser thoroughfares (Unter den Linden, Champs-Élysées) to explore the natural environments, the people, the commerce and culture that is Grand Junction Road. A journey from foothills to ocean, covering some of the better-known delis, scrap metal yards, prisons, and adult book shops. The response was dramatic: calls for the next journey across the Adelaide underbelly of perpetually red stop lights, pizza parlours (each, apparently, the best in Adelaide), car detailers, Centrelink and newsagent/lottery shops, propping up the dwindling fortunes of this once sort-of-okay state.

Today I plan to lead you along a short segment of North East Road (NER). I’d like to continue the theme of mountain to ocean, starting at Holden Hill and stopping at the Windsor for a quick shandy with Ernie and Fi-Fi (more about them later). This is a road I’ve walked, ran, ridden, driven for 50 years. I’ve ploughed into the back of a bus (Year 9, don’t worry, I wasn’t badly injured), fallen off the same bike, tumbled and rolled, picked myself up, as some old girl slowed, wound down her window and said, “Aren’t you Judy’s boy?”

I’ve walked its length (c. 1977, with Rodney, Keith and Dazza), stopping at every business to ask for stickers (for the back of our bedroom doors). I’ve escaped Gilles Plains Primary (more on that later) to walk to Holden Hill Music to buy Mr M (Grade 7) a D string. A career-ending move now, but no big deal in the day. 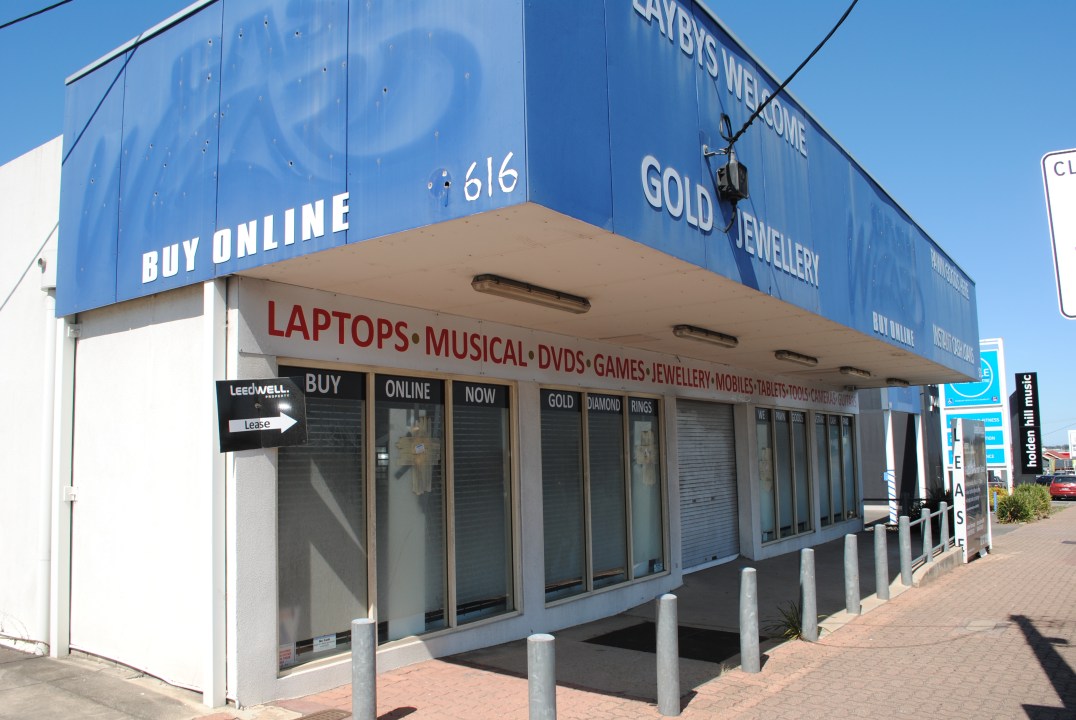 So let’s begin with one of the automotive highlights of NER: Holden Hill Radiators. I’ve had several replacements, good service, quality stuff (pop into the Highlander for a quick schnitzel while you wait). You used to be able to see into the workshop, and the calendars, as your mum said, “Isn’t that disgusting!” The floors never swept, the windows never cleaned, a greasy calculator for the hand-scribbled bills, melamine counter with a half-drunk Passiona and someone’s old chips (again) from Don’s. There was a faded Peter Brock poster, an aspidistra in a copper pot (full of butts) that had died years before, a pile of car magazines, and Sherbet banging away on an old tranny from the workshop (as the mechanics introduced a whole new vocabulary). 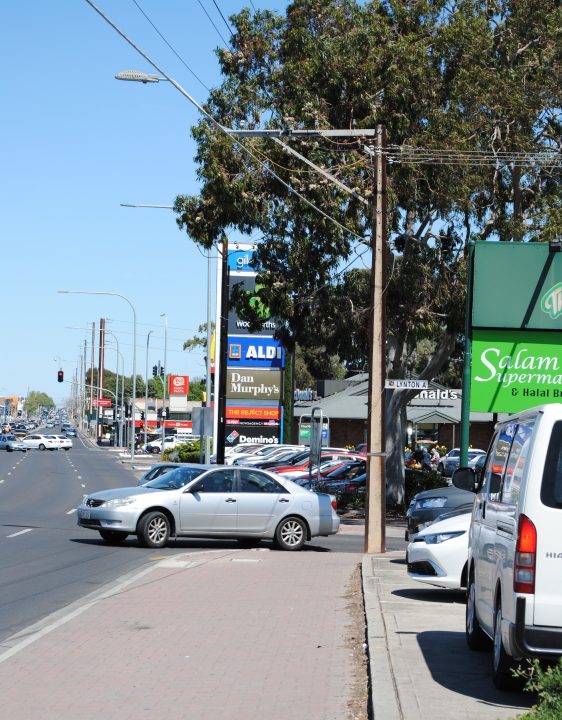 Try getting that sort of experience on Fifth Avenue. See, NER was, and is, Adelaide. Its TABs, its pubs, its payday lenders, its (sadly closed) pool hall, its grog shops, Vinnies, Sallies. Not that I’m saying this to be mean. More, as a celebration of life, the hope that things can always get better, the schools less dysfunctional, fewer KFCs and Maccas, more (or any) Boost Juices, gyms and bookshops.

Although I make light of it, it was always this fine line, this skating on the edge of poor and okay, modest but proud, the old country and the new (Ernie and Peggy). The back streets full of fibro people with big dreams, honesty, no-nonsense, a bottomless pit of generosity that came from an adversity that could’ve been worse, could’ve been better.

Continuing. Sam’s Plaza Pizzas (Established 1970), also the best pizza shop in Adelaide (though, this time, with some claim to the title), beside Bonzawash Laundromat (from the days when you could combine a nice evening with clean underwear), hairdresser, Chinese restaurant and toner cartridges. As though, in the Holden Hill wilderness, these shops co-existed, a sort of commercial mutualism (like a hawkmoth in a dianthus). And across the road, the Shell, and Sherwood Motors, where I bought my first car. A Robin Hood-themed yard, although I’m not sure who was robbing whom. Either way, there’s me and my dad sizing up a 323, the test drive with someone called Trevor, or Bazz. Forms were signed and we drove off the lot with a new life, fag smell barely hidden by a sun-dried lemon deodoriser. Although now the forest (like lots of spots along NER) has been felled, waiting for another unremarkable set of shops to define some other poor bastard’s childhood. 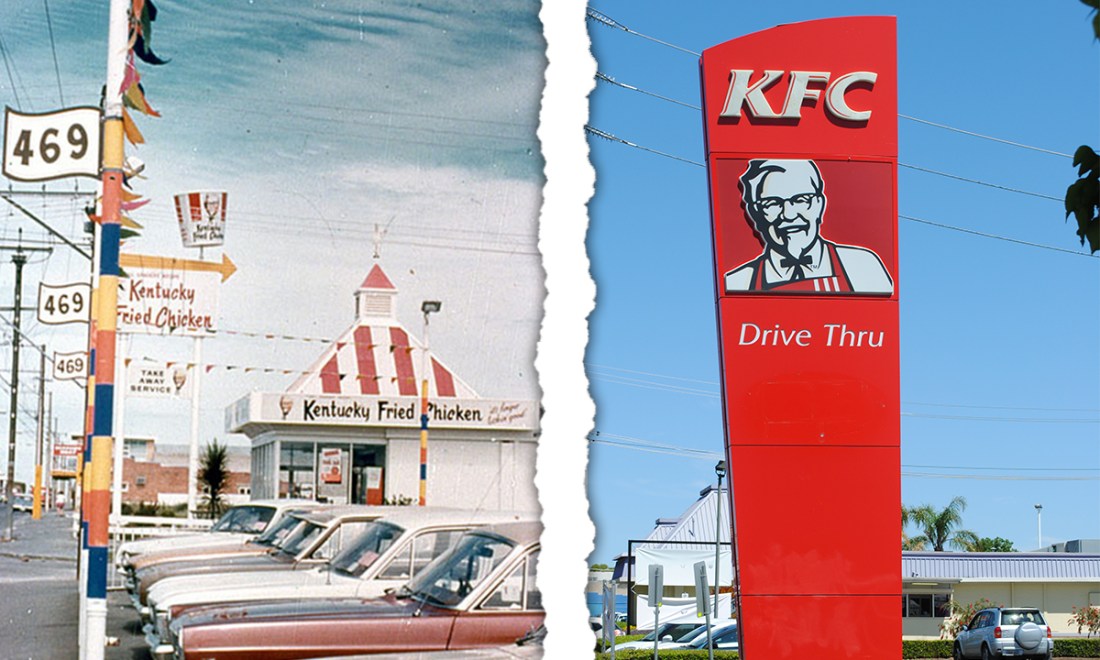 So now we’ve arrived at my old barber. Hop on the bike, wait (serenaded by Pilot), check out the mags until: “You’re up next, young fella.” Talk about school, potential jobs, (lack of) girlfriends, as I thought, “Shit, did I bring the right money?”

Continuing, past Holden Hill Music (from the days when every red-blooded 17-year-old started a band), more car yards, lawyers, auto parts, tyre centre, servo, window tinting. Like, in a way, our lives were a function of our cars – polishing them, loving them, attending to their health (instead of our own), more stickers on the back of the door. Inevitable, I guess, in a city where governments had never bothered with public transport.

And there’s a photo framer, trying to look innocent. The Holden Hill pool hall was a revelation. At Gilles Plains High one advantage of being placed in the bottom PE class was that the teachers left you alone. While all of the stars primed their glands on the oval, we were left to play four-square, or led to the pool hall. Dark. Smoky. The Temora trots on the telly. A big guy with tatts sucking back rollies like a baby with a bottle of bourbon. Even then, we were so hopeless we couldn’t get the ball in the hole. But we did enjoy Tolkein (before he was a thing) and BASIC programming.

Holden Hill Crash Repairs, 4×4, car wash, bean bags, hair extensions and wings and ribs. This was my world. A sort of nonsensical songline that I followed every day. Trevor Grant’s place, a birthday party, a new Evel Knievel I wanted to keep for myself. Trevor had been in a Hungry Jack’s commercial. In a world that placed the telly above everything (literally, Don had one beside the vinegar), this made him a minor deity. He was good with a trampoline, too. All of this was way out of order in a world of undeodorised, underachieving kids.

And speaking of HJ’s, there it is, mostly unchanged since 1976, when my dad looked down at me and said: “You sure you want a Whopper?”

“You never get through a Whopper. Maybe a cheeseburger, son?”

My dad took my sister’s victorious netball team there for a celebration, thereby cancelling out any gains made during a long, long season (I was in charge of orange quarters). And next door, the Pizza Hut. My class went there in 1979 (our teacher was “friendly” with the manager). We were allowed to make our own pizzas, but pissed around, and got our heads cracked back at school. But it wasn’t me. I had a Submarine. 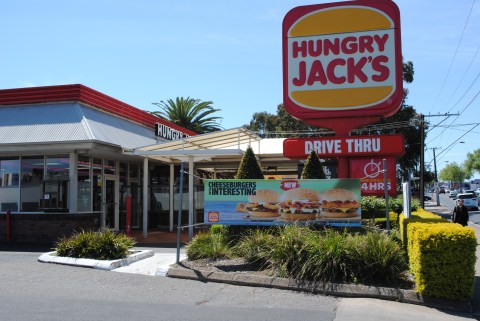 On to the Gilles Plains Shopping Centre. In my day, smaller, with a record shop where I bought (among others) Up There Cazaly and Genghis Khan’s classic Moscow. Later, J.J. Cale and John Lennon, as my mum stood at the butcher’s window admiring the lamb cutlets, the fake grass, blood oozing from the roast beef into a stainless steel gutter. I bought my Panzer models at the newsagent, and played Gilles Plains’ first Space Invaders machine in the mall where my class was made to sing Yellow Bird (‘did your lady friend, leave the nest again?’) to the accompaniment of Mr M’s guitar (with a new D string).

Continuing, past Country Style Chicken, the corpse of Tom the Cheaper, Kirsty Sportsman’s house (my second major crush, after Mildred Fong). All of the ’60s shops along NER had classic car parks, tight turning circles, concrete wheel traps, no trees. There was an empty paddock where a circus (in an act of desperation) once set up. Not sure anyone went. Circuses weren’t a Hillcrest thing. Then there was Strathmont High, but the government made short work of that.

Speaking of closing schools, here’s my primary school, Gilles Plains, taking a last gasp before it’s forever shuttered, sold off to developers. Luckily, there’s a White Lady Funerals next door. What was once a Savings Bank of South Australia, a visiting teller who told us it was great, wasn’t it, kids, how you could save five cents a week and before you knew it have a bike, then a car, then a house. She never mentioned the billions they’d make screwing us for the next 50 years.

There’s a little brick building along NER, the original 1901 schoolhouse. I guess it will go when the school goes at the end of this year. It would be nice to save it, as a nod to our collective yesterdays, our educations, our ambitions, our dreams, the value our parents placed in education. But I guess that’s too much to ask. The number crunchers will see it, like the whole school, as another house lot, more money, more tax, more rates, more siphoning the last few dollars from the last few citizens. 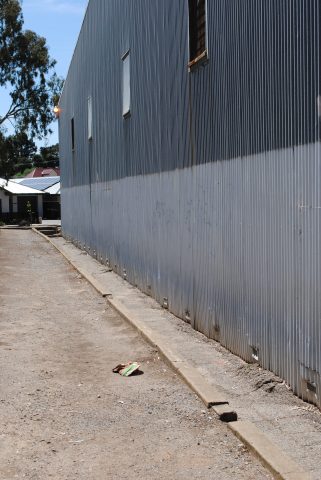 Moving along. Another car yard, and the basketball stadium Port Adelaide-Enfield Council is flogging off for, you guessed it, another hundred Tuscan townhouses. So much for the “Stay Fit!” mantra with which our Glorious Leaders fill their brochures, speeches, press releases. On the way home from school I used to shove my uneaten lunches through the ventilation holes under the courts. I hope someone finds them. Still wrapped in wax paper. Keep walking!

Another car yard, the fish shop (now the Bollywood Boutique and Beauty Bar), an acre of hot glass, and Don, waiting for some bastard to order minimum chips. Worse, to pay with a bag of bottles. Don must have hated me and my sister. Like most scabs, we collected everyone’s empties. But we were part of his Australian dream, living behind his shop, floating in the mist of fat that, cod or no cod, saturated our childhoods.

There’s the Kentucky Fried Chicken (the version before KFC). The smell of luscious thighs drifting into our back yard every morning, in the dunny door, my room, as I counted my change.

Past Lloyd’s hardware and, at last, the Windsor Hotel, the Wonderful Land of Oz, Ernie’s Hajj past Economy Meat and Apex Glass every unglazed afternoon. Ernie sang on his way home (sometimes I’d hear Yellow Bird, and think of Mildred).

Strolling, slowly, on a hot night; slowly, when it was raining; slowly, admiring the endless stream of Kingswoods and Commodores, saying hello (perhaps) to John, who ran the BP (a smoke in hand as he filled cars with 50:50).

See, the layers of history, the people, their smells, their footsteps, claiming Hillcrest in the name of civilisation (sort of).

So that, in the end, NER was, and is, more than just six lanes of traffic.

No beginnings, no destinations; nothing spectacular, or even necessary.