The Guardian reported earlier this year that the British Government and local councils across England have ‘wasted hundreds of millions of pounds painting pointless white lines on busy roads and calling them cycle lanes’ (‘Painted bike lanes are a waste of money, say cycling commissioners’, The Guardian, 17 June 2019).

They said that painting lines is simply a ‘gesture’ and ‘do nothing to make people feel safer on a bike’.

Line marking – painting stuff on our streets – is the ultimate ‘designed-by-committee’ outcome. It drives me mad.  Bureaucratic laziness. Engineering our cities with paint.

Driven by a race to averageness, line marking of our bike lanes is an outcome of a series of Australian Standards for (mostly) engineers to use on paper, usually in large municipal offices, faced with the task of renewing something that often includes a large dose of annoyance (‘Geez, they need painting again?’), and often (not always, but rare) without a skerrick of thought of why they are needed in the first place.

Or a begrudging acceptance they represent the 1-2% of the daily users of our city’s streets using human-powered, two-wheeled devices.

The City of Adelaide’s visionary ‘Smart Move’ transport strategy had loftier aims, delivering the recently almost complete North South City (separated) Bikeway, a product of aiming to attract the 60% of the population who would ride a bike if it was safe, easy to do so, and in normal clothes, not in tight-fitting lycra.

So, let’s focus on this for a minute.

Anyone who has hopped on their bike from any of the inner suburbs in any of the major capital cities, to head for the city, will know what I mean.

The main roads into the city have painted bike lanes which is a good start, yet I wouldn’t ride in them in peak hour for fear of my life.

They are simply unattractive and risky as they are shared with buses and bus stops, one of the menaces for the average person who (wants to, but doesn’t) rides a bike.

One of the principle issues is that most of these roads are in poor condition, and despite peak hour bike lanes on a few of them, the ride comfort and hazards are everywhere.

The joint between gutter and road is almost always inconsistent. There are potholes. Services dug up and the road surface put back worse than it was. Drainage grates, crossover driveways and side streets.

This is why so many confident riders ride on the actual painted line – it is the smoothest part of their (limited) space.

It’s the same as people in cars. We all hate driving on pothole-filled roads for fear of damage to tyres and suspension, as well as our ride comfort. Our cars are precious. We must not damage them.

For most of time, people in cars are courteous and try to do the right thing. Yet the nanosecond of inattentiveness can result in injury or worse to the person on the bike, as well as the phycological damage to the person driving the car.

You do the physics and you can see why more people don’t ride to work on these roads with painted bike lanes.

I’m not advocating or starting an argument against standards and laws. It can be used to sort our expensive and tragic accidents for insurance companies. It has serious legal implications. 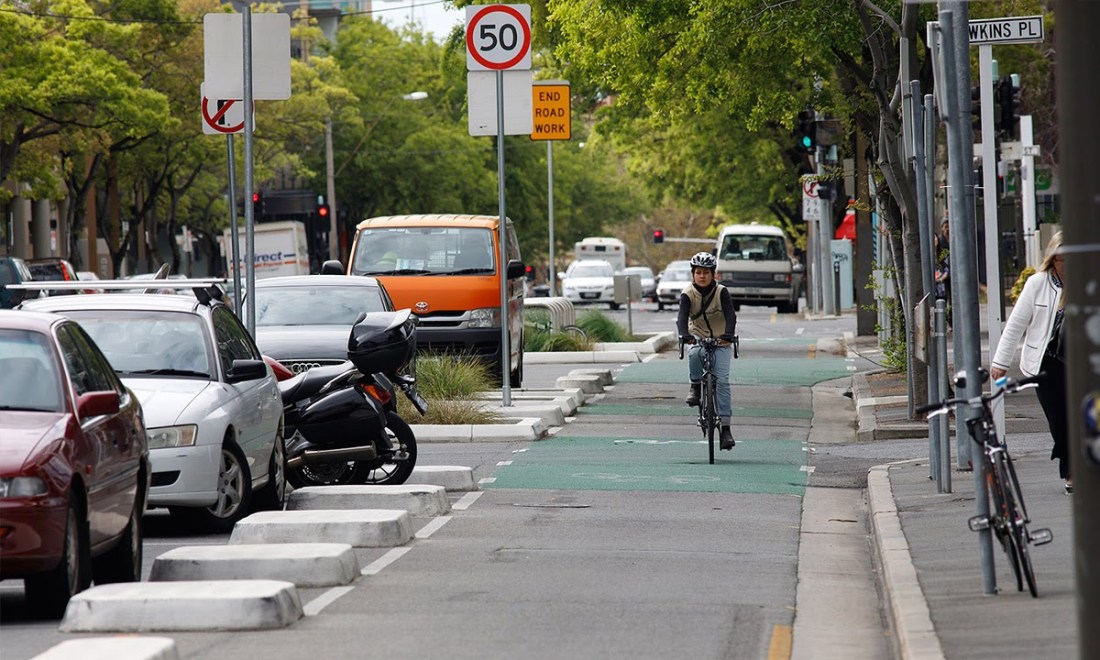 Quickly notching up c1,000 riders a day, it has become a beacon for how we should think about this: streets for all.

Let’s think about this for everybody – and success will follow.

Our council struggled with it, but we did it. We kept traffic moving, we created a better and safer environment for people on bikes, we doubled the number of street trees and shrubs, we improved lighting and we (hopefully) showed the city how we can do these projects better.

Fundamentally, it creates some space for people who chose their mode of transport to be self-propelled, and protects them.

It keeps everything else as is; space for bins on bin night, car parking, traffic access, driveway access, and footpath space. No one loses.

However, people who ride gain. They gain comfort in safety, amenity and pride.

In fact, we all gain. We can address the imbalance. Health SA predict that people who don’t exercise have a much higher chance of obesity, heart disease and early death if they don’t move more often.

So, why I am ranting about linemarking?

The role of streets in making our cities and towns healthier, greener, nicer and richer places to be needs to be elevated beyond them being merely places for cars.

An emerging idea is to make our streets naked. In Europe they’re calling them ‘naked streets’.

Essentially, naked streets remove the distinction between cars and people and allow them to mix and work it out, through good design, behaviour change, and the principle of streets for everyone.

In Australia, our controlled version of this approach is called a ‘shared street’. We have some in Adelaide: Bank Street and Peel Street, where the kerbs have been removed, people share the space, and cars are allowed through at a maximum speed of 10km/h.

The principles are very simple: priority to people not in cars, limiting car parking on the street, higher quality streetscape design and lower speeds.

What does this look like? In a narrow inner urban street, it would mean that people have right of way and cars are guests.

Local councils on an annual basis treat all the bits in our streets differently – replacing kerbs, footpaths, and the road surface – and often not at once. Who has witnessed this?

Imagine if there was a better approach: councils could actually add value with their ‘asset management’ for a similar investment: remove the kerbs, deal with the drainage, and create more space for places for people to live in their street. The asset is looked after, but it actually achieves so much more and increases our social infrastructure.

In outer urban streets, where often footpaths don’t even exist, let alone street trees, it means placing a priority on reducing car space (whilst still allowing access), and increasing space for people including footpaths, trees, gardens, and even water collection. Who has wanted to try planting a fruit tree in their street before and been denied?

All residential streets in Adelaide could benefit from engaging in this approach, and whilst I am not suggesting this is suitable for South Road or Grand Junction Road, it is appropriate in many areas.

Imagine being able to meet your neighbours and get to know them (as there is more room to socialise), imagine your kids playing safely in the street, imagine the new street trees you could have as a result of more space, and imagine our communities becoming stronger.

Ask your local council – when can I have my street back?

Our cities are for everyone. We must remember that. Even the (growing) number who ride bikes.

Linemarking is the lazy answer to a question that was asked when cars became dominant many decades ago and can often yield ridiculous results. And all that paint washes off after a few years, has to be renewed often, and so it is not sustainable.

Fixing our streets for generations and for everyone is the answer. Investing in our streets for living in (instead of simply driving through) will lead us to more people out of their cars, more often.

This is the considerate and happy city I dream of.

Daniel Bennett was Associate Director of Strategy and Design at the City of Adelaide between 2014-2019, in charge of shaping strategy, greening and designing the city.

He is Director of  DJB_LA Pty Ltd, a strategic design practice focused on creating cities for people.