This time last year, the state Liberal Party’s AGM was a bit of an organisational flop.

The conference room they booked was right next door to the somewhat racy “adult health and sexuality” exhibition Sexpo, making for an awkward arrival for the po-faced political attendees, while the marquee guest was not the then-Prime Minister, but his lesser known Treasurer Scott Morrison.

But no-one much cared, for the Liberals had recently returned to power for the first time in a generation, were yet to put a serious foot wrong and traditional factional rivalries were thus set aside as everyone revelled in the understandably buoyant aura, Sexpo and all.

Indeed, as far as the Libs were concerned, last year’s AGM might very well have stood for: “All Good, Mate!”

Nonetheless, one presumes tomorrow’s follow-up AGM won’t make the same mistakes: it’s unlikely to be held adjacent a sex industry showcase again – twice in as many years would make it look like design rather than disaster.

And this time round, the marquee guest is none other than the now-Prime Minister… um, Scott Morrison.

But no matter how well stage-managed the forum, it will be a very different vibe among the party faithful.

Steven Marshall and Rob Lucas have appeared doggedly determined to not merely antagonise, but anger, an influential contingent of their party faithful over land tax reform. Despite the generally stage-managed nature of annual political conferences, this is likely to be raised – at the very least as a matter of interest by a rank and file member – while those MPs who have not publicly nailed their colours to the mast simmer in the background.

The previously-sympathetic Property Council is stepping up its own campaign, with an email to stakeholders this week urging AGM attendees “to raise this issue as a matter of interest and priority” and – more damagingly – seeking prominent property owners to volunteer their premises as propaganda billboards to “spread the word across Adelaide”.

“Boom gates, ticket machines – you name it, these are important vehicles to carry our message,” read the missive from the council’s executive director Daniel Gannon, a former adviser to both Marshall and Lucas.

“We’d love to utilise billboards, signboards and advertising channels within commercial and retail buildings across South Australia – assets that you own or manage… we’ll be able to augment our advertising footprint by tapping into the very investments that the State Government is seeking to damage and devalue.”

And it’s broadly symptomatic of the prevailing Liberal mood since the last AGM, in which time the party has been wracked by internal division over policy, with MPs crossing the floor not once, but twice, to protest mining reform, and influential Right-wingers breaking ranks in recent days to publicly oppose the land tax aggregation changes.

Further, while it’s still too early to say the rot’s set in, it’s time enough to observe that the cabinet itself has not universally performed to expectations: there are some members not exactly setting the world on fire, and others who are setting things on fire, but in a pejorative kind of way.

On top of which, SA yesterday returned to its dubious position as the unemployment capital of Australia – for the first time since the Liberals were elected on a pitch to grow jobs and the economy.

Which means this year’s AGM might instead denote that everything’s Actually Getting Messy. 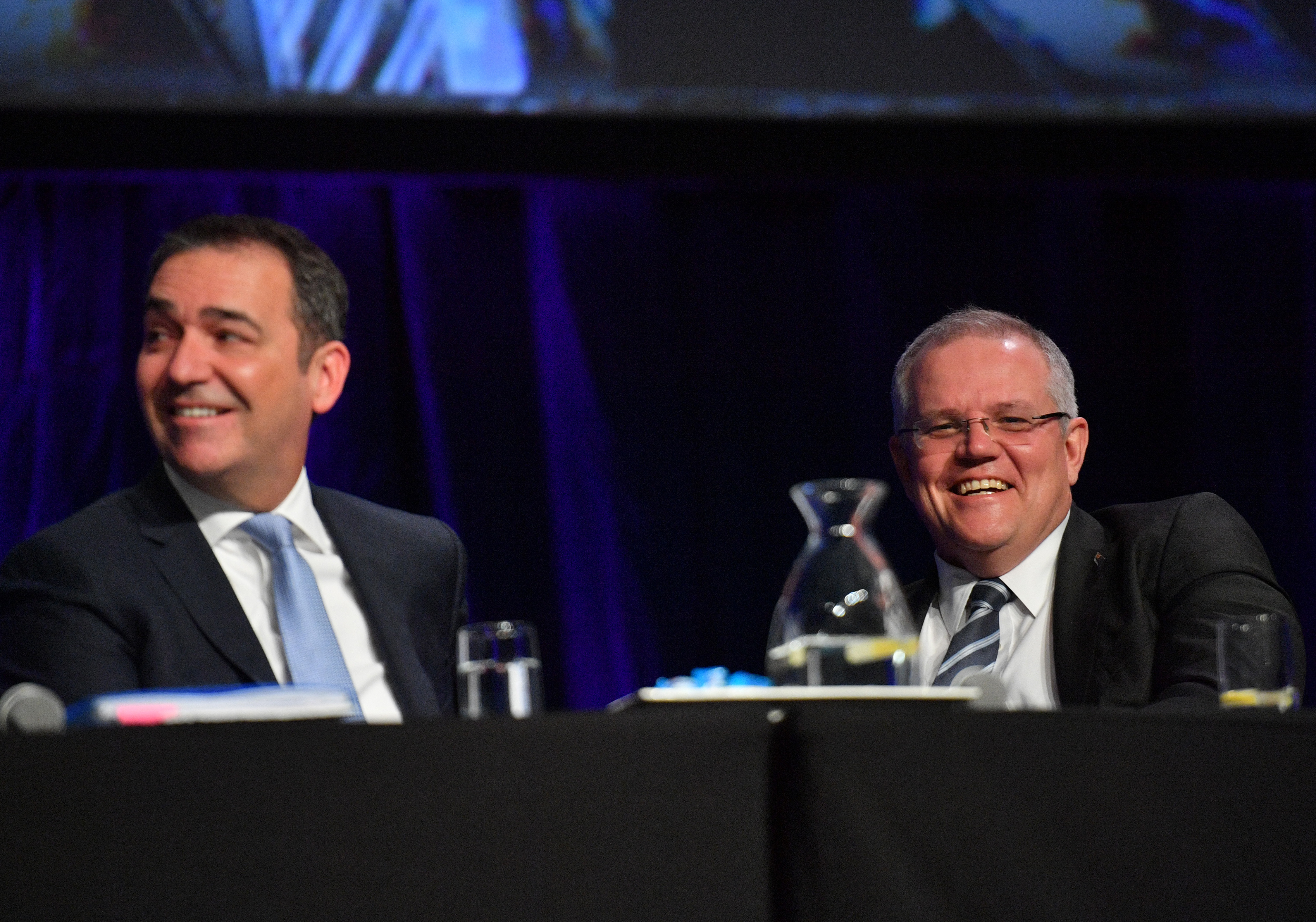 Scott Morrison turned out to be more of a marquee guest than he appeared at the time. Photo: David Mariuz / AAP

And, as is the way of things when things get messy, the corresponding political pitch gets ever more fevered.

On top of growing jobs and the economy, the Libs’ big pre-election pitch was to restore some semblance of openness and transparency to public life. As with the former aspiration, the reality of the latter has fallen significantly short of the stated goal.

Instead, the administration has determinedly sought to funnel half-truths into the public realm via favoured media outlets, most often News Corp’s The Advertiser.

A good example came last week, when it used the publication to flag its withdrawal from Australia’s bid for the FIFA Women’s World Cup. In reality, it appears that was only ever an ambit claim, an attempt to solicit a more favourable deal from soccer’s national governing body.

But part of the stated rationale for the move – that they were unable to shift AFL games from Adelaide Oval for the duration of the event because they’d be liable to pay significant compensation – didn’t stand up to scrutiny.

In fact, under the stadium deal, the Government has the express right to stage FIFA World Cups at the venue, provided it gives the requisite two years’ notice.

There is no mention of compensation, largely because they have no obligation to provide any.

The usually unflappable Marshall appeared to take umbrage to my questions on this topic this week, ending a media conference with a snide aside about the story I was writing that suggested what he really thinks of InDaily and its readers: “I’m sure someone will read it.”

If this Government can’t tell the whole truth on a question as benign as that, it raises serious questions about what else they’re not prepared to tell us

Still, at least whoever read it got a clearer idea of what was going on than the erroneous impression left by the Government’s previous utterances, which had even led to a ‘Tiser op-ed bemoaning that South Australians “have lost control of Adelaide Oval”, with power being handed to the AFL’s “corporate managers interstate”.

In fact, it appears the AFL’s opinion on the 2023 Women’s World Cup bid was never even sought, let alone that of the Crows or the Power – the Government relied solely on “representations” from the definitely-Adelaide-based Stadium Management Authority.

Of course, the whole mess could have been avoided if the Libs hadn’t spun that one layer too far: if they’d simply said they weren’t prepared to use Adelaide Oval – or spend tens of millions upgrading Hindmarsh – because FFA hadn’t guaranteed them a good enough draw.

The lily was gilded, for the most part, by Tourism, Trade and Investment Minister David Ridgway, who waxed lyrical on radio about the cost of “compensation for the Crows, the Power and the SMA”.

His office is yet to show me where this compensation obligation is etched in the stadium agreement.

It hasn’t been a great week for Ridgy. 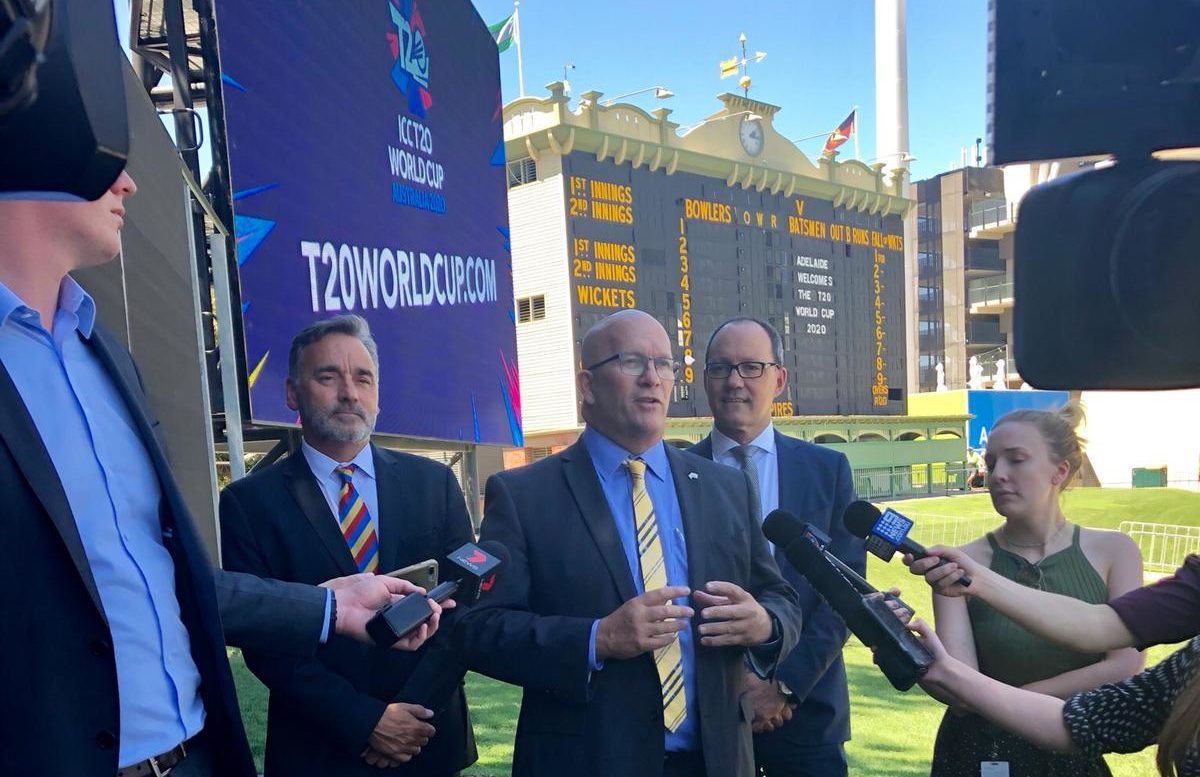 On a tip-off, I yesterday asked his office a specific question about a forthcoming announcement about a new US trade office, part of a pre-election pledge to establish standalone hubs in various locations around the world. The tip was that the Government was planning to open digs in Houston, Texas – but within an existing Austrade facility.

My emailed inquiry began: “I understand the minister is planning to announce the opening [of] a new trade office, embedded within Austrade, in Houston Texas. Can you confirm?”

Ridgway provided the following generic statement by way of response: “The Marshall Liberal Government is delivering on its $12.8 million funding commitment to establish 5 overseas trade and investment offices, the locations of which are chosen to generate the greatest economic benefit for South Australia. We look forward to establishing our US office in the near future which will further strengthen our engagement with the world’s largest economy.”

Not even a day after our story was published, Ridgway confirmed the establishment of the Houston trade office in a media release.

Even more remarkably, he still persisted with what was evidently his original strategy – he dropped it to the ‘Tiser. Albeit with no mention of the Austrade office – that bit was itself “embedded” near the bottom of Ridgway’s eventual media release. 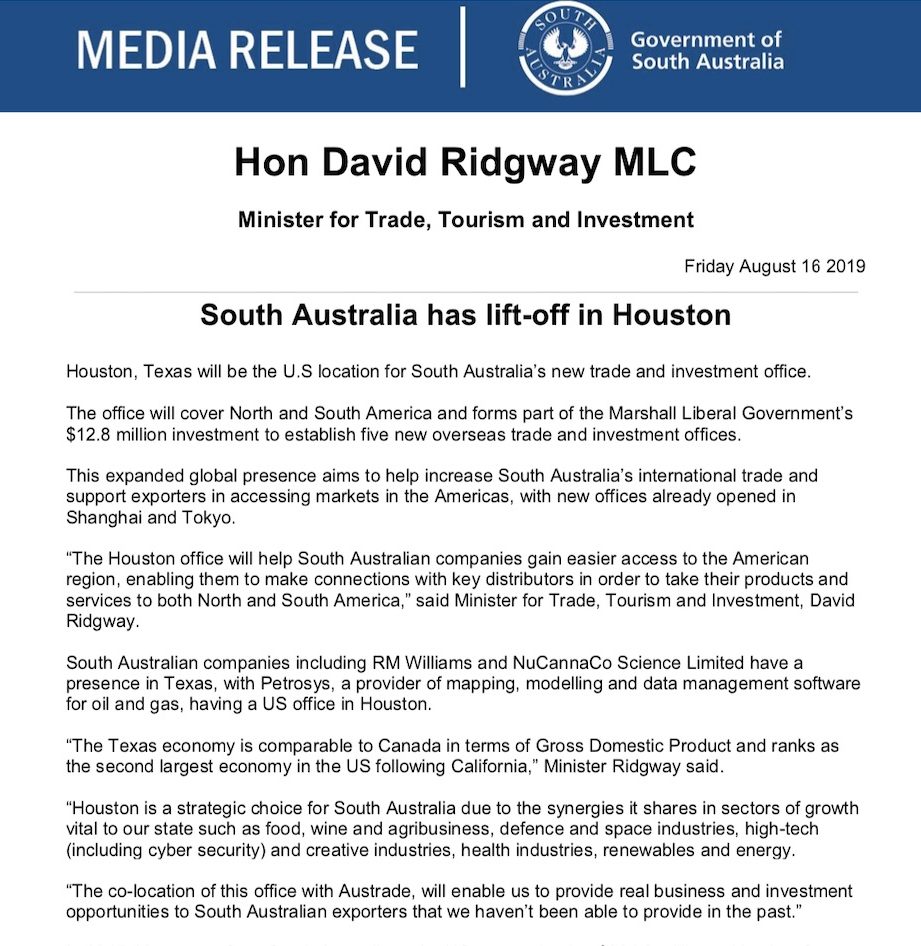 An excerpt from Ridgway’s release this morning.

I’ve been covering SA politics since 2003, including at The Advertiser, The Australian and Channel 9, and I can’t recall ever before asking a minister’s office a direct question – moreover one confirming a simple fact – and being stonewalled so they could get a more favourable run with another media outlet.

A good rule of thumb for politicians everywhere: if a journalist asks you a direct question, the idea is to give them a direct answer.

Especially if you were recently elected on a promise of “openness and transparency”.

Trade offices in Houston may be a minor deal in the political controversy stakes, but if this Government can’t tell the whole truth on a question as benign as that, it raises serious questions about what else they’re not prepared to tell us.

Still, whatever happens tomorrow, I’m sure we’ll all be told about the many positive moments and resolutions from the Liberal AGM.

And that may even be the truth. But probably not the whole truth.