A majority of academic staff at some of Australia’s top universities work in casual or fixed-term positions. This reflects a trend towards casualisation in academia, and other industries, in Australia and New Zealand.

Fixed-term employment is also a form of precarious employment. This is usually when the university employs research staff working on externally funded projects only for the extent of the project. So, in effect, the research funds the academic’s employment (from a research grant) while enhancing the reputation of the university.

Precarious employment particularly affects young academics. In some Australian universities, more than 80% of staff under the age of 30 are insecurely employed. This insecurity significantly restrains their lifestyle options.

For my PhD, submitted in 2017, I explored the experiences and well-being of young academics in precarious work. I interviewed ten young academics employed at Monash University in Melbourne on three occasions over a year.

Participants had been employed by Monash for between five weeks and six years at the time of the first interview (the average was two years). The average age of participants was 27. 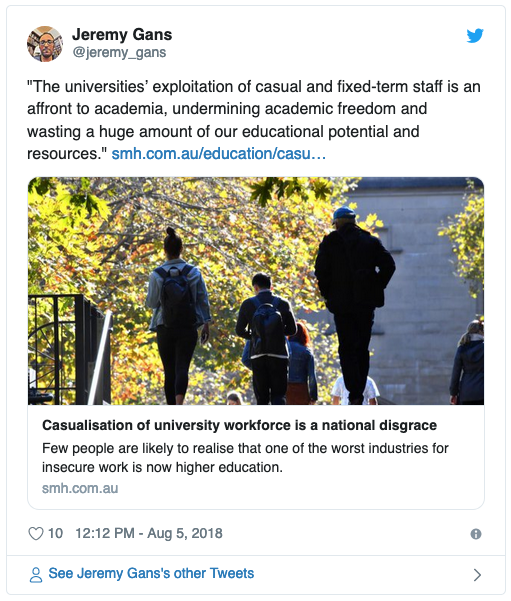 My research found participants on casual contracts felt vulnerable and of lower status than “permanent” staff members. They sometimes minimised instances of exploitation as part of an authentic academic experience.

You’re on your own

Formal induction programs, professional mentoring or performance review processes were often reserved for “permanent” staff. Academics in precarious employment made sense of what it means to be an academic, as well as gained knowledge about workplace norms and expectations, informally.

Participants said they gleaned information from chats with colleagues and supervisors, listening to presentations, reading emails, seeing media coverage of academic employment issues, as well as observing normative social practices in the workplace.

Positioned as early career researchers (ECRs), participants often sought solace from others like them. One ECR told me:

[…] talking to my friends and people in the ECR group, it is that communal moaning kind of thing, which is cathartic and helpful in that respect. But it is not going anywhere, we are all complaining about the same things we face, we just complain about it because we have got to tell it to someone who can understand […]

Tenured academics may be sympathetic to their precarious position but, according to the stories I heard, they weren’t necessarily helpful. 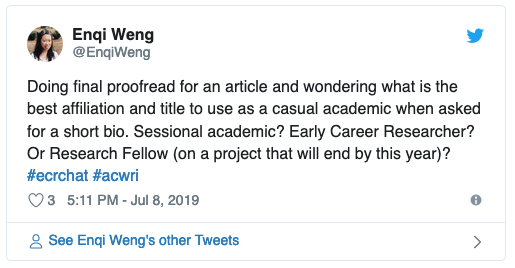 Will* described when tenured staff members would compare their position to his in a way that highlighted his situation.

Well my position’s secure and thank goodness I’m not on a fixed-term contract because that’d worry me […] you’re new so you have to get good evaluations because your probation is in a year and a half and you need to achieve that to be able to stay here.

Will found this type of interaction distressing as the communication style distanced himself (an insecure worker) from others (tenured workers).

Research participants were constantly reminded they did not have the status or privileges of permanent employment.

For instance, Logan described how, despite having his PhD and being employed full-time by the university, he still spent most of his time “hanging out with the PhD students” because his desk was positioned in an open-plan space with them.

There was a sense among participants of constantly trying to impress their supervisors. This came from knowing their future employment depended on the approval of the university and people in it.

Participants had a somewhat defensive attitude towards their exploitation. For instance, Mike said he worked on average an extra one unpaid day per week, which caused him stress and pressure. But, straight after saying this, he added:

I don’t feel like the organisation is a demanding environment. Like I don’t know what would happen if I did start working less […]

[…] there are a couple of funny things about how they (the university) handle contracts and staff and stuff.

It was difficult for many of the participants to be critical of their working context and the people in it, even if they were working unpaid hours. This was because, as Jasmine said, “I can’t escape work because that is my entire world, basically.” 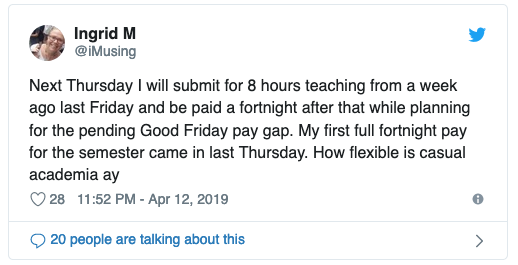 Although casual academics are on temporary contracts, some have been working for universities longer than their colleagues on continuing contracts.

Max told me he felt emotionally attached to the university:

I have just been here a long time. I studied here, I lived on campus here for two years, I was involved in a lot of student things when I was a student. I have seen the campus physically change a lot […] I can definitely see how much I have changed since I got to Monash. So it feels like I am a part of Monash or Monash is a part of me […]

Others felt more pragmatically tied to the institution, noting it was arduous changing employment. Ruby said:

If I went to another institution I have to learn it (the systems and policies) all over again.

My research found the insecure nature of the participants’ work interfered with their sense of identity, personal security, feelings of trust and self-confidence. Such feelings, which come from a constant state of flux, are encompassed in a term coined by British sociologist Anthony Giddens in 1991: “ontological security”.

In his book exploring the effects of modernity on social psychology, he referred to ontological security as:

the confidence that most human beings have in the continuity of their self-identity and in the constancy of the surrounding social and material environments of action.

Ontological security is linked to identity as it refers to feelings of security, trust, sense of familiarity, and the reliability of interactions across time and space.

The participants in my research had a threatened sense of well-being. As precarious workers, they felt vulnerable, dependent and of a lower status. Feeling continually at risk of being excluded from the university made them anxious and caused high levels of stress.

Will mentioned the word “probation” 25 times during his first interview. And Mike said the university could “get rid of people” by simply not offering them another contract.

But the participants also felt their precarious employment could help increase their sense of identity because it could lead to more (possibly permanent) employment.

In many instances, participants wanted information on how to develop their careers, forge ongoing working relationships, contribute to the academic community and gain the respect of their colleagues and supervisors.

Universities must consider the well-being of their workers, particularly those on precarious contracts, as well as the influence of tenured staff on their experience.

Kate Bone is a lecturer at Massey University