I like to think my natural disposition is largely calm, considered and collected.

In my professional life, I tend to be collaborative and conciliatory. In my friendships, I avoid conflict at all costs.

This may well be unimportant, but it’s who I am.

And I say this because I hope it adds some weight when I say that I watched the Adam Goodes documentary in Adelaide on Wednesday night and I wanted, and still want, to scream at the sky.

I am in equal parts devastated, disappointed, angry, hurt and let down. Worse, I’m not even a bit surprised.

And I am an Anglo Saxon man in his mid-30s, born in Australia without contact with the child protection system, without any considerable physical or mental health concerns, progressing a white-collar, upper-tax bracket life in a loving heterosexual family.

I tick pretty much every single box in terms of the least-oppressed demographic awards. Not just this year. I mean in history, forever.

At the launch, I sat in the wonderful Palace Nova cinema seats (as an invitee) with considerable trepidation about how I would view The Final Quarter – the documentary created by Ian Darling and Sally Fryer – with the agreement but not participation of dual Brownlow medallist Adam Goodes. The film covers Goodes’ final years in the AFL and the broader media controversy about his public role, his elevation as Australian of the Year and his stance against racism.

My personal views of the injustice and unfairness towards Goodes were, and are, strong, but my head was filled with 2014-15 commentary from the closest of family members that Goodes had somehow brought this upon himself.

And then I watched the documentary: 74-and-a-half minutes of footage, captured between 2012 and 2015, viewed by millions of Australians through conventional media outlets, put together in this brilliant, chronological film.

I cried three times. I burned with rage. I had some faux laughter. I even had some half laughs in expectation as each moronic Alan Jones quote was delivered (note, there were several). 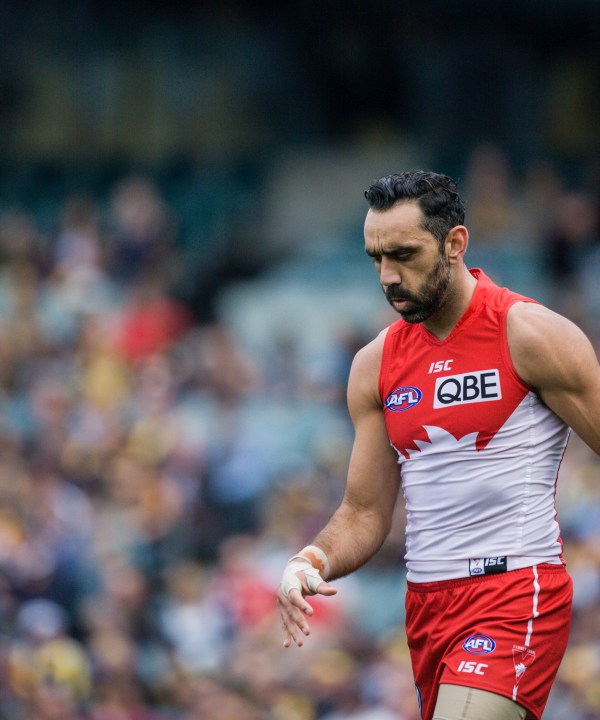 Adam Goodes on field for the Swans. Photo: AAP/Tony McDonough

I’ve always maintained (to myself and others) that my school and footy experiences with Indigenous kids in Mount Barker and Murray Bridge gave me some insight into the challenges we face in a policy and societal sense around reconciliation.

Now, I think that’s bullshit. I believe my view is fanciful, inaccurate and, as the mid 30s white-collar white bloke, really quite unhelpful.

I may hold so dear the footballing talent of Mervyn “Muffy” Kartinyeri at my club, kicking the most athletically miraculous goal I’ve ever seen at Tailem Bend, and later at Sturt, but is the base message from that actually just that I take comfort from his sporting ability – not his culture? That I identified with his footy talent, not his heritage?

Is the entire point of the awful, tragic, Goodes debate that, as a white nation, we want to enjoy the superlative exploits of Indigenous athletes but, in our minds, we need to completely separate them from every debate about Indigenous disadvantage, life expectancy, prison rates etc.

We want to enjoy minorities’ achievements on the sporting field, but not talk about their realities or confront their challenges.

I found watching The Final Quarter particularly difficult. And 20 metres to my left was Eddie Betts, surrounded by his family and friends as he also watched. Turns out he also saw the debut screening in February with the AFL Indigenous All Stars.

And, on this second viewing, he was devastated: utterly, visibly, devastated. I have no doubt that his fear is that nothing has materially changed, that we have learned nothing, and this shameful, painful mess could happen again next week, or is already happening in a less public way.

That just makes me angrier.

We have a man, at the peak of his powers, coveted by a state, feted by 50,000 screaming fans at a time, brought to his emotional knees reliving what his record-breaking, ceiling-shattering colleague endured this decade. What hope can we that the next decade will be any better?

My optimistic answer is to look to our youth. The audience at the documentary screening also heard an Indigenous teacher recount a story of a young student telling his dad that it’s not okay to say certain awful things about Indigenous Australians. That kid broke his own cycle of casual racism.

And, with The Final Quarter to be shown in schools around Australia, together with a viewing toolkit to assist schools and students, perhaps we have some reason for hope – because this is a national disgrace and I could not be more embarrassed.

Matt Clemow is the director of Social Policy Solutions and deputy chair of the Committee for Adelaide.