It may prick the ego of many a state Treasurer to point out that their lot is effectively that of a glorified finance minister, less ideological architect than accountant. Simply ensuring, as the old cliché goes, we do not pay ourselves more than we earn. Unless of course (as the case may be) someone else pays us more than we earn instead.

But their role is generally less about lubricating the economic gears than merely keeping petrol in the proverbial tank.

Although I doubt Rob Lucas is too bothered about the distinction.

That he this week handed down his sixth state budget (albeit with a fair layoff between the fourth and fifth) puts him among the longer-serving of modern SA Treasurers.

And yet the man himself remains defiantly low-key. 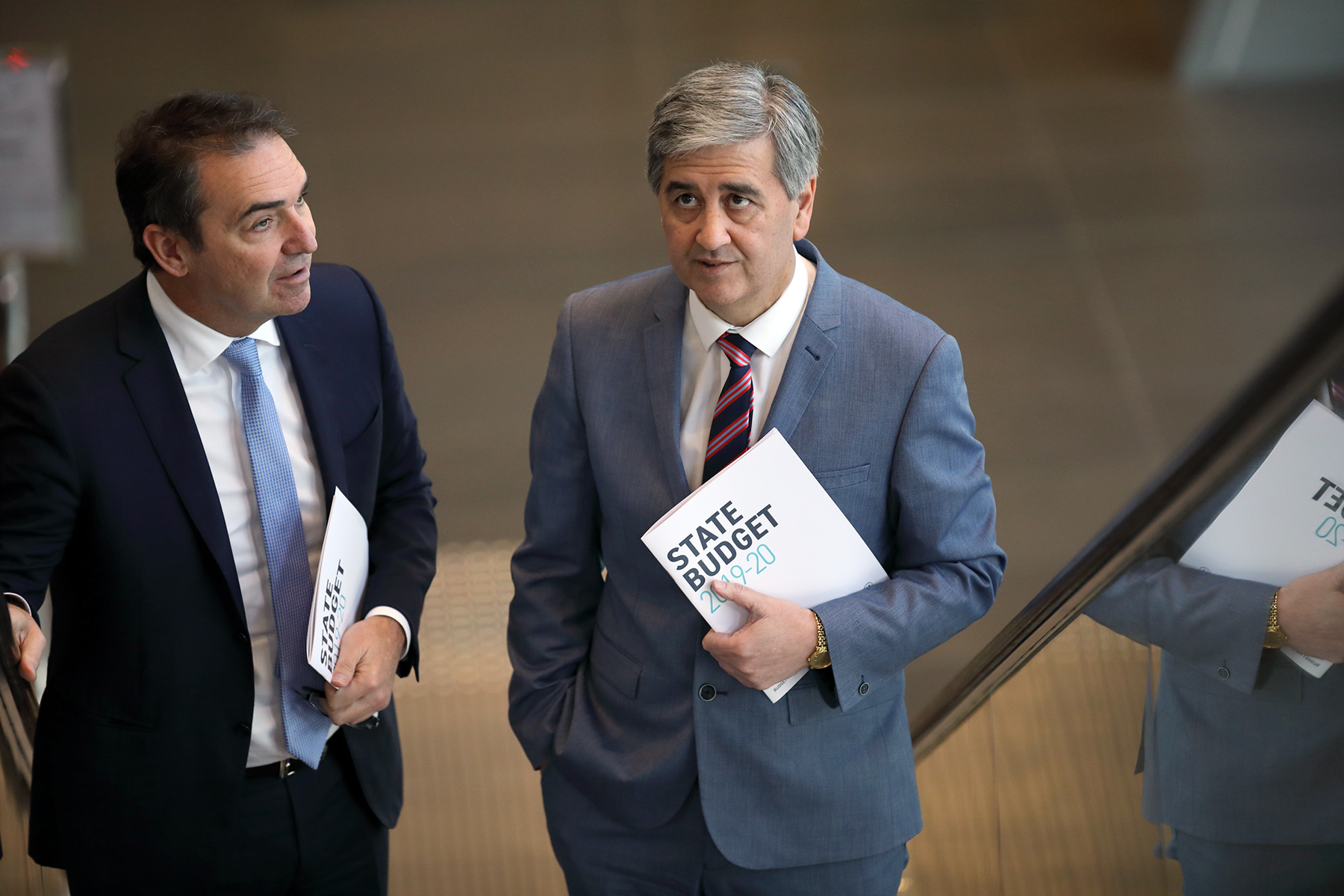 So much so that he happily played along as the butt of a joke he inadvertently started at his own expense this week.

It is often the case that the most resonant framing of the budget happens not on the day it’s handed down (or even amid the series of obligatory media drops in the lead-up) but the following morning as the Treasurer does his annual radio rounds.

And so it was this year, when Lucas fronted up to explain why a man who spent an unseemly number of years in Opposition complaining about debt would then deliberately rack up the state’s biggest ever debt burden within 18 months of returning to government.

Asked by ABC presenter David Bevan whether the state debt could be paid off in his lifetime, the 66-year-old conceded it was unlikely (obviously), but cautioned: “I don’t know how long I’m going to live.”

His boss doesn’t have high hopes.

Asked about the exchange in the same day’s Question Time, Premier Steven Marshall noted: “I have seen the Treasurer go down to the Myer Food Court at lunchtime over a long period of time.”

“He has a high sugar diet,” he chided.

“I’ll be surprised if he makes it till the end of the month.”

As the old saying suggests, there is nothing more certain that death and taxes…

The rest of the week, then, was spent perpetuating this gag, with frequent social media updates on the Treasurer’s latest culinary adventures and his overall state of health.

Not sure about these claims of my high sugar diet!! pic.twitter.com/0jqwqf8JI1

My lovely staff bought me a box of these! Given Premiers statement I’m not sure what message they’re sending me! pic.twitter.com/leZxQH54KW

To all intents and purposes though, Lucas’s budget is, unlike his diet, balanced, and largely devoid of sweeteners.

Nonetheless, it remains in some ways the fiscal equivalent of his propensity for high-sugar snacks: something that seems like a good idea at the time but for which you could end up paying years down the track.

And something, moreover, that ultimately leaves the consumer strangely unfulfilled.

Lucas has never resiled from making decisions that annoy people (in fact, I suspect he rather enjoys it).

But governments of either stripe tend to work out in advance who they intend to annoy, and the political and policy consequences of doing so.

When Labor took on the banks backed by the business sector, for instance; it was a failed gambit, but it at least made some form of strategic and ideological sense from the outset.

Lucas, on the other hand, doesn’t seem to know or care just who he’s getting offside.

For a Government whose ongoing mantra has long been about ‘backing business to grow the economy’, there are some penny-pinching measures in this week’s budget that simply make no objective sense, beyond the mere fact of penny-pinching.

New fees to hit mining exploration in some of the state’s most desirable sites, for instance.

The Treasurer is also happy to pick a fight with the generally well-disposed property sector, whose peak body is overseen by his former staffer Daniel Gannon.

Sure, Lucas says his land tax reformatting is designed to capture people who deserve to pay more tax; people, he strongly suggested, who had been effectively rorting the system as it stood by holding a stake in multiple properties under the guise of different trusts.

But seriously. These tax changes are set to net $40 million every year.

Either way, one can only presume it might make property a less desirable investment going forward.

For a Government with an ongoing narrative around easing the cost of living, a raft of fees and charges that will do the very opposite becomes a tough sell indeed.

And that’s before the overt cost-shifting measure of the budget’s ‘bin tax’, which transfers the revenue-raising onus over to the local government sector via a 40 per cent whack to the solid waste levy, a move it’s difficult to separate from the Libs’ failed bid to cap council rates.

Cost of living, Lucas told media this week, is “our ongoing narrative” and “I don’t shy away from a robust narrative around this area”.

As he tells it, easing cost of living is, like the budget itself, a balancing act – something to be viewed in the aggregate.

“We have increased fees and charges, but the $90 million Emergency Services Levy remission has continued,” he explains.

People will pay more in new rego costs and increases in hospital carparking fees, but make savings in “massive reductions in CTP premiums”.

But his overarching narrative is one of “continuing good, solid economic management”.

Instead, his budget is “a responsible balance of further expenditure reductions, targeted revenue increases and an increase in debt levels to help finance a significant economic infrastructure program”.

That program was billed pre-budget day as an ambitious “$1.1 billion” spending spree.

But that, too, is misleading.

Even today, the Government sought to remind taxpayers of the major works that would benefit from the budget largesse, distributing a lengthy list. 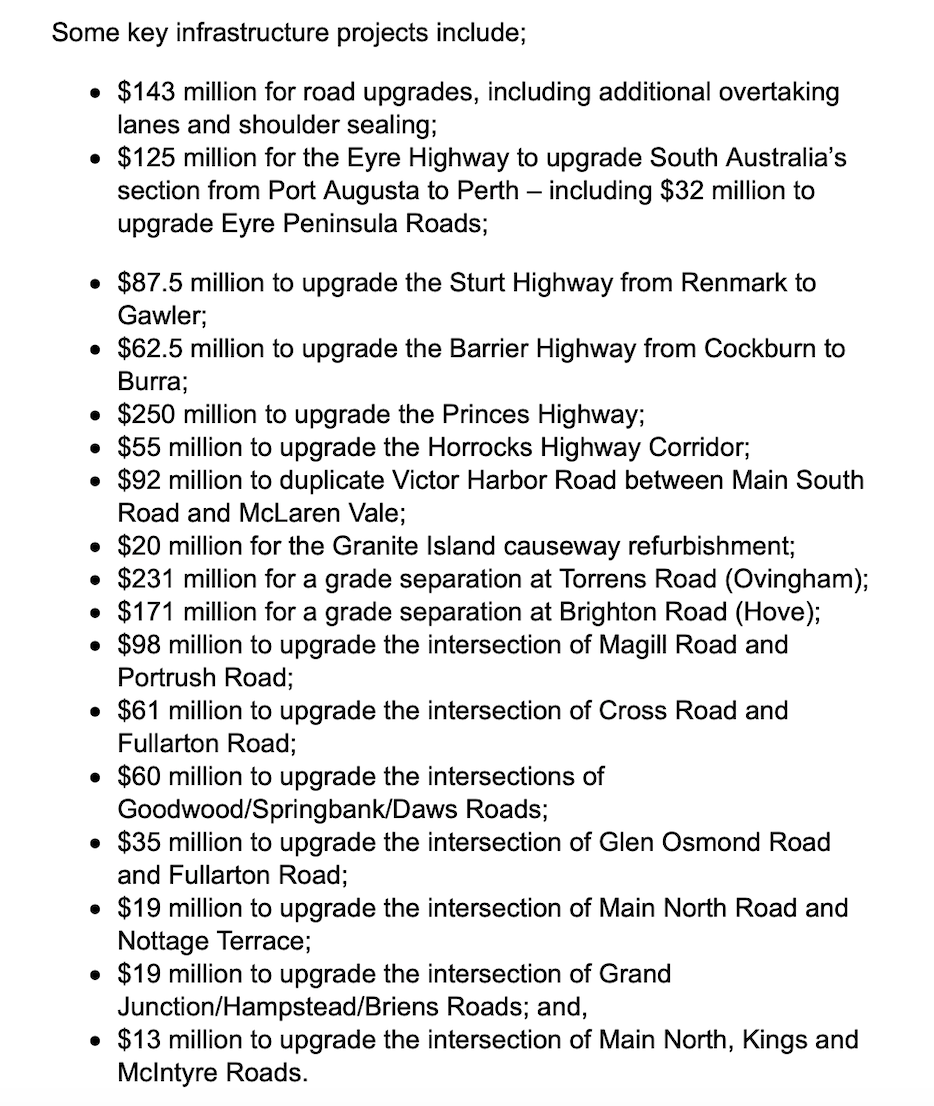 But these figures, like the $1.1 billion itself, do not represent the state budget spend.

The Victor Harbor Road duplication, for instance, was announced by the Commonwealth in the lead-up to the recent federal election.

The vast majority of its $92 million pricetag is Commonwealth money.

The feds are also kicking in half of the $60 million for the much-debated fix for the Springbank/Daws Rd traffic snarl.

Indeed, the feds as a rule kick in half of all the metro projects listed and 80 per cent of the regional ones; the $1.1 billion headline figure is not the state budget contribution, but the total spend.

While Lucas would not resile from the most modest assessment of his role – a finance minister whose gig is to keep the budget, if not his diet, balanced – there still needs to be some artistry to the whole thing.

Budgets are statements of a Government’s ideological priorities, a manifesto for the type of administration they mean to be.

Lucas’s budget, though, tells us nothing beyond a simple statement of fact: that the Government regards maintaining a budget surplus as the single most important thing it can deliver in office.

To that end, they’re prepared to – almost indiscriminately – make life just that little bit tougher for all sorts of people, including traditional allies and those whose vote may have been won over by an unflappable narrative to ease the cost of living and working in SA.

Lucas, who retires at the next election, has one – perhaps two – more budgets in which to bring this whole thing together into some cohesive vision.

But if future budgets continue to reflect the worst tenets of his high-sugar diet, the Government of which he is perhaps the most influential part may have a political lifespan no longer than his own.

Because, to continue the week’s foodie narrative, this week’s budget appears less a five-star banquet than a dog’s breakfast.