By 2016 South Australia had, by accident, become a world leader in renewable energy integration. The system engineers still managed to operate the grid reliably, and the RET continued to mandate more wind farms. Rooftop solar kept selling and selling. In 2013, renewables made up 30 per cent of South Australia’s total generation. Three years later they exceeded 40 per cent.

Given the popularity of renewable energy, the growth of renewables generation in South Australia was hailed as a success story. The State Government took credit as a pioneer of renewables integration. The new wind farms created an oversupply of generation that pushed down wholesale electricity prices, a fact that was spruiked as an even better consumer story. Clean, green and cheaper for everyone! Subsidising more expensive generation technologies lowered energy prices! It was an impossible win–win. For a while, the South Australian renewables story was a political utopia for then premier Jay Weatherill: a case of premature self‐congratulation.

However, below the political waterline, things were starting to get dark both commercially and operationally. The South Australian electricity grid was the smallest of all the mainland grids, connected to Victoria by two transmission lines known as interconnectors. These lines could supply about 25 per cent of South Australia’s maximum peak load, pumping in cheap brown-coal power from Victoria’s Latrobe Valley. To help back up the increased number of renewables, the Australian Energy Market Operator (AEMO) agreed to a 40 per cent increase in the size of the larger Heywood Interconnector. Otherwise there were three main power stations in South Australia: the Northern Power Station at Port Augusta, which was the last remaining brown-coal plant in South Australia, and two large gas generators at Torrens Island and Pelican Point. There was also a scattering of smaller peaking power stations designed to jump in to help when demand and prices were high.

The big swings in renewable energy started to pose major technical problems for the Northern Power Station. As wind generation increased, Northern was more often generating to lose money, and being forced out of the market altogether on windy nights. Something had to give.

Like Roy Scheider at the start of Jaws, Zema knew something was wrong, but he had no justification to close the beaches.

In 2015, Northern’s owners, Alinta Energy, tried turning it off over winter (except in emergencies) and running it only during summer. They tried contracting industrial customers, hoping to shore up enough regular demand to keep the power station operating. They even asked the State Government for $24 million to tide them over for another three years. No one was interested. Wholesale prices were falling. Who would want to get in the way of that? Governments pointed to the rise of renewables and falling prices as clear evidence that their interventions were working. They had mastered the giant NEM machine and made it do their bidding. And so Northern closed in May 2016. It was the second-biggest power station in the state.

But the problems didn’t stop there. South Australia’s two main gas generators were slightly more flexible and could cope better with the wind variations, but the top-up power from Victoria tended to get the lion’s share of the work as it was even more flexible, and cheaper. Pelican Point, the more expensive of the two gas power stations, was soon more often off than on, and its owners started heading down the same path as Northern. Half of its capacity was mothballed in 2015. The electricity market had not been designed to cope with this. Intermittent renewables generation was being forced in at scale by mechanisms completely outside the design of the market, and they were in turn wiping out the firm generators needed to back them up. The South Australian grid was becoming more fragile.

At the start of 2016, the then boss of the AEMO – which is like the air traffic controller of the grid – was a guy called Matt Zema. Zema, a South Australian, had become increasingly anxious about conditions in his home state. He could see the fragility of the grid and yet he was powerless to act, because nothing had happened except prices were down and a coal-fired generator had closed. Like Roy Scheider at the start of Jaws, Zema knew something was wrong, but he had no justification to close the beaches. When Northern closed, South Australia was in uncharted water. The big gap in firm (dispatchable, controllable) supply sent wholesale electricity prices up by 23 per cent, and power bills with them.

Six weeks after Northern closed, a winter cold snap hit South Australia. In the second week of July, electricity demand increased sharply as Adelaidians put on their electric heaters and reverse-cycle air conditioners. Then the wind stopped blowing. The state’s gas generators struggled to source enough gas to operate at capacity. The interconnector to Victoria was partway through its upgrade, leaving its capacity constrained. Wholesale electricity prices skyrocketed. That was the first serious market warning that the state was running out of power.

Matt Zema tragically and suddenly died later that month. It was like losing the captain of a ship just as it was about to navigate particularly hazardous waters.

In the end, the trigger was a massive, violent storm. On the afternoon of Wednesday 28 September 2016, severe thunderstorms and tornadoes hit transmission lines in South Australia and triggered a statewide blackout, otherwise known as a ‘system black’. System blacks – the complete shutdown of a grid – are extremely rare. The scale and intensity of that storm was always going to cause power outages in South Australia, but losing the entire state was avoidable. At the time of the blackout, the grid was operating as per normal – which means it was supplying the state’s demand as cheaply as possible. This is the normal, default setting for grids around the world: no one wants to pay any more than they need to for power.

That afternoon the state’s wind farms were generating furiously in the storm, producing 70 per cent of South Australia’s local generation, which, at one level, is impressive. It was also standard operating procedure for the grid. Wind and solar were always dispatched into the grid first because they had no operating costs and ran when they could, taking whatever price was set by the market. As the next-cheapest source of supply, the interconnector was also running at capacity. The final top-up of supply (18 per cent) came from two units of local gas generation. The rest of the gas generators were operational, but not switched on. This was the cheapest setup for the grid in South Australia that afternoon. But, as it turns out, it was fragile. 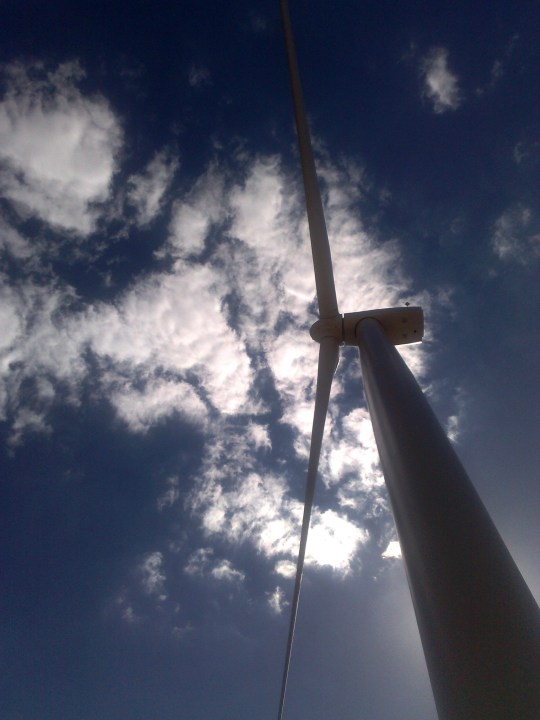 Around 3pm that afternoon, in rapid succession, three transmission lines north of Adelaide got knocked out by the storm. This cut off the west and the north of the state from the rest of the grid. Most of the state’s generation, from wind farms, went with it. This separated most of the generators, which were in the north, from the bulk of demand, which was near Adelaide. All that was left were a few wind farms in the south east, the two small gas units around Adelaide and the power coming in from Victoria. This new ‘mini-grid’ was suddenly and desperately short of power. It needed extra generation quickly. The remaining wind turbines couldn’t provide it as they were already operating at their maximum. The interconnector couldn’t dial up any further either. Filling the huge void was simply too much for the two small gas generators operating near Adelaide. The grid shut itself down. The state went dark.

In the post‐mortems that followed, much of the debate focused on whether renewables caused the system black. This was the wrong question. The renewables in South Australia did their job that day exactly as they were supposed to, as did the other technologies. This was an inexperience blackout. South Australia went to system black because its grid was not operated to reflect the true risks that day. With the benefit of hindsight, the solution is easy: order the wind farms to reduce output by 40 per cent. Have more gas power stations switched on and operating with plenty of spare capacity, and dial back the interconnector so that both it and the gas turbines are able to respond quickly. But this didn’t happen, because the grid was being run on old rules for a new system. Sometimes you have to make mistakes to learn. Renewables can’t dial up. They give you everything they have. If you have a high-renewables grid, you need to be able to access more fast-start technology to jump in if something goes wrong. It was a rookie mistake. Without intending to, South Australia had just conducted the world’s biggest experimental failure in integrating renewable energy.

Economist and journalist Matthew Warren spent the past 15 years working for the electricity, downstream gas, renewable energy and coal industries. He was chief executive of the Australian Energy Council, the Energy Supply Association of Australia and the Clean Energy Council.

Black Out is published by Affirm Press. 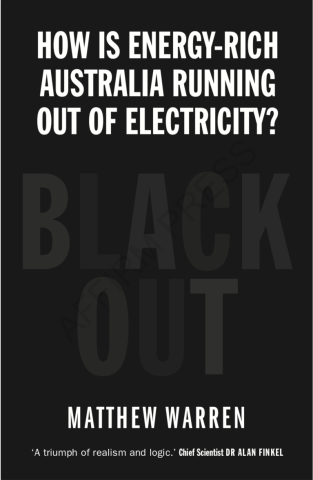