With a federal election looming, it is the time for both the Federal Government and Opposition to clarify where they want submarine maintenance to be based.

In March last year, it was revealed that government-owned ASC was asked to draw up a draft plan for its 700-strong Adelaide operation to relocate to Western Australia.

The move was dismissed by the Federal Government as “routine contingency planning” but after events in federal parliament this week, it is now looking like more than that.

Under questioning from Centre Alliance Senator Rex Patrick,  it was revealed that ASC had once again received a directive – this time in “recent months” – to “investigate a series of options for shifting hundreds of jobs involved in Collins Class submarine maintenance to Western Australia, including one as early as 2022”.

There is a lot at stake and South Australians deserve to know where politicians stand on this issue before heading to the polls.

While building submarines will provide a welcome $90 billion economic boost for South Australia, maintenance is even more lucrative with every $1 spent on construction equating to about $2 spent on sustainment.

And maintenance lasts for multiple decades while the build period, although significant, is shorter.

In addition, there are numerous high-tech supply companies who are heavily involved in sustainment and we could risk losing them – along with their skilled workers and engineering and technological capabilities – should such a shift occur.

Currently, about 700 ASC submarine workers are based in Adelaide conducting major overhauls – or “full cycle docking” – of the Collins Class submarines while another 400 of its staff carry out other maintenance in Henderson, Western Australia.

Western Australian politicians have been lobbying the Federal Government to move submarine sustainment for years, arguing that Osborne does not have the space to build frigates and submarines and carry out maintenance as well.

Yet we do have space and there is a strong argument for maintaining the submarines where they are built. After all, that is where the capability is.

Senator Patrick also argues that retaining sustainment in Adelaide – both of the existing Collins Class fleet as well as the future submarines fleet – also makes geographical sense given our location “halfway between the planned west and east coast basing locations”.

Even though South Australia is losing its relevance in Canberra through federal seat losses, while the lack of marginal seats in our state means we could be easily overlooked come election time, it’ s important we have our say on this issue.

With the ASC scoping study not due out until mid-year, it’s concerning that further discussion is most likely to occur after the federal election. 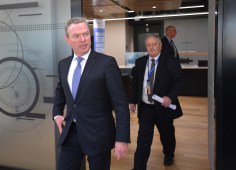 Defence jobs guarantee could be lost in translation

And that’s long after South Australians have visited the ballot box.

Jodie van Deventer is chief executive officer of the Committee for Adelaide.