Gun massacres in the United States occur with such predictable regularity now that the coverage of each atrocity often bypasses the analysis of the killer’s path to mass murder and skips straight to the broader gun debate. Society has accepted that there are individuals out there misshapen enough to commit such acts. As unsettling as that may be, we have nonetheless accepted it as fact. In the days following the 1999 Columbine massacre, there was more preoccupation with how society produced such individuals.

Now, almost 20 years later, the preoccupation is with gun laws and whether they should change. But there is more than one impediment to such change.

There is the pervasive influence of the National Rifle Association (NRA) that has bought and paid for many members of Congress and the Senate. This impediment, as sickening as it may be, is easy to understand. What is harder to understand is why a tidal wave of public sentiment has not risen up and smashed those vested interests.

The answer to that question is, of course: “America’s gun culture won’t allow it.” We have all had that gun culture explained to us. And the historical argument goes something like this:

1. “The Constitution of the United States of America decrees that “…the right of the people to keep and bear Arms shall not be infringed.”

2. America’s independence was won from the English through violent revolution.

3. Slavery was abolished and the Confederacy became the United States after as many as 750,000 soldiers died in the Civil War.

Some of the more recent gun massacres, like the Las Vegas shooting in October 2017 that saw a lone gunman kill 58 people and leave more than 500 injured, only served to increase gun ownership as people armed themselves against a similar situation. This is surely the cruellest paradox of modern American society: those seeking to prevent another atrocity only increase the likelihood of it occurring again.

But it is only now – 115 episodes into AMC’s post-apocalyptic zombie TV series, The Walking Dead (TWD) – that I have truly grasped how deep-rooted that gun culture is.

There is nothing original about TWD. The premise is tried and true; probably tired and true. A zombie apocalypse of indeterminate origin befalls the United States (perhaps the world) and a band of survivors struggles its way across the southern states in search of help.

And in keeping with the spirit of the zombie genre, there is blood and gore aplenty. Zombies (or ‘Walkers’ as they are called) die in the thousands. And those deaths leave nothing to the imagination. In fact, there is not enough space here for me to detail all the different ways in which zombies meet their end in TWD. A bullet or knife to the skull is just run-of-the-mill. They are pulled apart, crushed by vehicles, pulverized by baseball bats, decapitated by samurai sword, axe and water cannon, stomped on, shot by crossbow, cleaved by machetes, eye-gouged, burned and impaled by spear. And that is just a small selection of the some 2500 zombie-deaths in the series so far.

In the context of the genre, this is no revelation. However, it’s not the inclusion of this gratuitous, graphic killing that is instructive, but rather the omission of other content generally considered to be adult in nature. Because, although the TWD depicts the brutal killing of approximately 2500 zombies, there is very little swearing and absolutely no nudity.

Ordinarily, this account of fictional violence might be the logical segue into a sermon about the message this sends young people. But in the context of the gun debate, I think it is more illuminating to focus on how TWD is actually a reflection of American society and its tolerance of violence.

Guns and violence are heavily normalized in TWD. There is rarely a scene that does not depict a firearm of some sort. And lives are expended at a frenetic rate. YouTube has a clip titled: The Walking Dead 2333+ Walker Kills in 30 Minutes. And that doesn’t include the many gruesome deaths that have befallen survivors (the main characters who have not succumbed to the zombie virus). 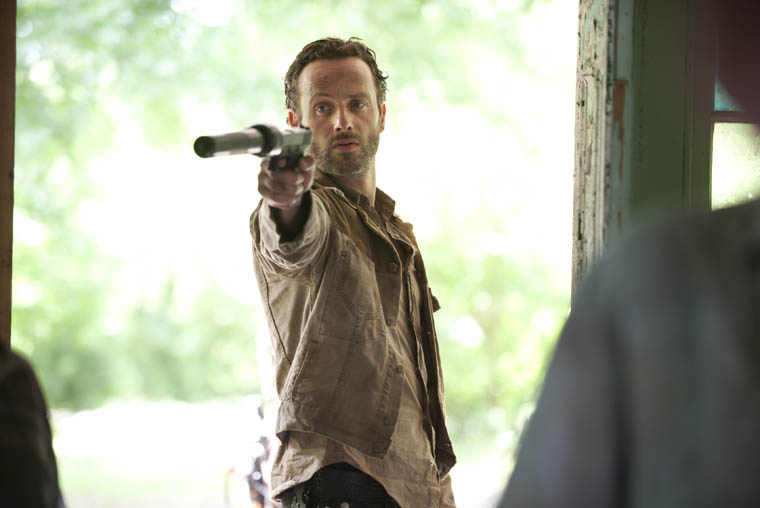 TWD is just a modern take on the spaghetti western. The characters are armed killers wreaking vengeance while struggling for survival in an unforgiving landscape. The enemy attacks in waves and is mowed down with impassivity. The main characters are politely spoken; gunshots are punctuated by ‘ma’am’s’ and ‘beg your pardons’; profanities are much more an indicator of moral debasement than any proclivity for murder. Nudity is nowhere to be seen – carnality is only alluded to with a kind of subtlety that is nowhere to be found when zombies attack.

And so, what we have is a show that is unashamedly pitched at an audience who feels uncomfortable with the F-word or a flash of breast or buttock but titillated by a scene that depicts a survivor inserting his fingers into the eye sockets of a walker and pulling its head clean off, as if picking up a ten-pin bowling ball.

For me, this dichotomy provides great insight into why American society is incapable of changing gun laws. Sadly, it offers no hope for change, at least insofar as a shift in Americans’ attitudes to guns is likely to drive that change.

However, what we can do here in Australia, where we have built an international reputation for strict gun laws, is make sure those laws are supported by local content quotas that ensure our kids aren’t only exposed to television programs that teach them that guns and violence are nothing but an expression of one’s freedom.

The yawning gulf between America’s puritanical sexual culture and its liberal gun culture makes for interesting television, but it’s actually the culmination of centuries of legal, political and military history. If you don’t have time to learn that history in great detail, TWD might just be the idiot’s guide you never knew you needed.

Blair Boyer is the Labor MP for the state seat of Wright.