“You seem a long way off, Walter,” I told my mate Clappis on the blower.

This was W.W.W. Clappis, the maker of McLaren Vale’s biodynamic The Hedonist wine on Strout Road, and not his cousin, Andy Clappis, the chef up the Range. These Clappisses share a refined enlightenment at the trencher board and jug …

“You’re not in Shanghai are you?”

“You’re not in the Old City by any chance?”

“Yep. Just came into the square.”

“Bullshit! See that tea shop on your right? Can you duck in there and get me 500 grams of Ku Ding Cha?”

This is the sort of thing that happens when one commits to hunting the freshest, sweetest, most efficacious Ku Ding. It’s usually found in China, but in Vietnam is known as Trà đắng. It’s a tea-like infusion, not made from the  regular Camellia sinensis leaf which is commonly fermented to blacken, but rolled straight and green from the leaves of the holly tree, Ilex kaushue, which is also known as Ilex kudingcha.

It’s a not necessarily a bush. It has shiny leaves like the sinensis shrub but it’ll grow like a tree.

Regardless of its loftier height and shape, it ranks with the Mediterranean wormwood (Artemisia absinthium); the tropical groundcover Gynura procumbens; hot chillies; raw ginger and garlic at the head of my bottle-scarred herbal, foraged or cultivated. I live on this stuff. Now I gotta sharpen my focus.

Maybe Radio Free China reported the InDaily news of the Australian Wine Business Monthly’s piece – no idea how he found out – but Walter called again from China the other day when he heard that with the tumour farm I seem to be running in my dark gizzards I’d probably be in need of a fresh Ku Ding shipment any minute soon: two days later it was steaming on my desk. I’ve had the whole system set on RINSE since. Astute man, that Walter.

Various torrid odemas have since shrunk.

Ku Ding is extremely bitter. Like the wormwood and the gall in the cranky old Protestant hymn: it’s about as bitter as bitter can get short of death.  If it’s stale or cheap it’s just too far out for most humans. But get magic fresh stuff like Walter somehow tracked to an organic trader somewhere there in the little matter of the Orient and let them leaves unroll in your bowl and you somehow have one of the most refreshing and restorative anti-oxidant brewages known on Earth.

Top-sheIf Ku Ding finishes very gently sweet. One can enhance this: Keeping them intact, split and slice a few of the new-season cherries from Lisa and Mark McCarthy’s vineyard and orchard down here on Sand Road at McLaren Flat, and put them in the bowl with the leaves. McCarthy’s are picking the perfectly luscious Sam cherries again this week.

Do the same with a couple of the semi-dried jujubes (Ziziphus jujuba), add the crackling hot rain and watch the leaves unroll. I often let it cool; it’s fine with fizzed water on the rocks and makes a handy mixer. Even the addition of honey barely touches that bitterness. 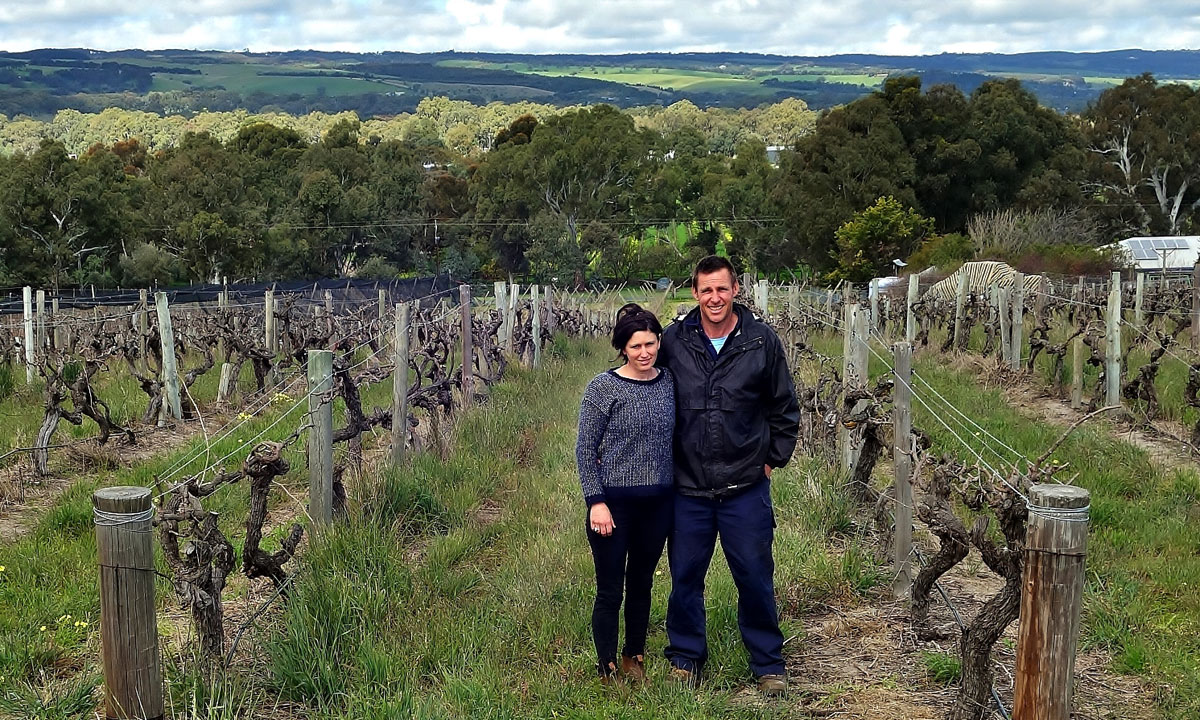 In his determination to introduce foods which require less irrigation in the dying Murray-Darling, Mark’s father David brought this most efficacious date-like fruit to Australia. He also introduced the pistachio through his enlightened research farm near Mildura.

“They thought he was mad,” Lisa chirps, “replacing thirsty citrus, almonds and grapes with these foods.”

But using Ku Ding with citrus juices, Bickford’s Lime, and maybe a squirt of Cointreau or Strega, one can get soda-close to the bitter scaffolding of, say, the Seville Orange rind in Campari. I like bitter flavours. Play with them. Juggle their bright aromatic hues. Add vodka when required – it’s like a photographic fixer in the developing tray. If the jujubes are still there in the cooling liquor of your cha, squeeze the juice from them through the slits you’ve cut. Yum.

For flavour direction, think Green Chartreuse: towards the terpenes you find in cannabis and Rosemary.

Otherwise, while that idea’s better kept for the winter, I’ll have three or four pots of hot water refill over the same leaves.

I’m keen to see somebody rip into the scientific research of Ku Ding as thoroughly as they’ve excavated Gynura procumbens, which will drop dead in a normal Kangarilla winter: being jungle headland cover in the tropics, the poor thing needs to come inside with lights and heat down here on the Great Southern Ocean.

But it’s summer now and the pots are blooming: I love this stuff in a roll or wrap with fish and sprouts and feta. It’s like a crunchy carrot-flavoured watercress, and goes just tricksy with Ku Ding made with cooling honeywater and an ooze of lemon.

I’d also like to see the pot researchers teach the Ku Ding/Gynura growers their brilliant display wheels to interpret terpene flavours which compare their sources and various medical efficacies. Spin me with science baby. Our three-or-four thousand years of the cannabis revolution is only the beginning of such great unveilings.

Peel open the millennia of forgotten natural efficacies and you realise these enlightenments are never learned early nor won cheap. In the criminal case of pot prohibition, we’ve permitted a century of big pharma’s active stifling and denial of the science surrounding this miracle plant. Increasingly, marketers fall shy and retreat from ancient and famous claims of many restorative foods as medications while the patent attorneys shred the entire pharmacopoeia in their race to own and exploit it.

In the meantime, we’re left with unscientific fluff like this about Ku Ding:

“With a reputation as being a longevity and sliming [sic] tea the medicinal properties are vast. Chinese Medicine doctors prescribe it for coughs and the common cold, itchy eyes and headaches. It is also used for fever and bad diarrhea. Any memory issues can benefit helping raise ones [sic] spirit. More contemporary western medicine acknowledges Ku Ding as a tea that can help with blood circulation and blood pressure along with lowering blood lipids like cholesterol.” 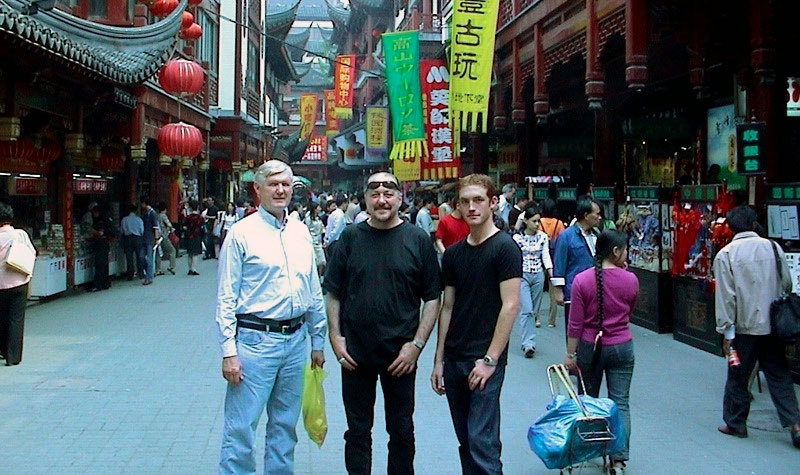 Coonawarra Highbank winegrowers Dennis and the late Morgan Vice with Whitey (centre) outside that Shanghai tea shop 11 years ago.

Between you and me, and you can do bitter, and track the stuff down, Ku Ding Cha’s the duck’s guts. Focusing tighter, ku means bitter and ding is nail so let’s launch the new marketing with something about nailing death to a tumour with Ku Ding then winding up them photons in the nuke ward to vaporise the whole rotten mob.∗

Speaking of unscientific fluff and my propensity to quote it, especially at this time of our saviour’s blessed birthday, here’s that goddam Methodist hymn about bitter.

Check the buzzwords: even “prostrate” seems perversely evocative while one tunes the lyre, and we’re seeing stars with the floating balls and old Jesse’s rod before we even get close to the bitter end!

All hail the power of Jesu’s name!
Let Angels prostrate fall;
Bring forth the royal diadem,
To crown Him Lord of All.

Let high-born Seraphs tune the lyre,
And, as they tune it, fall
Before His face who tunes their choir,
And crown Him Lord of All.

Crown Him, ye morning stars of light,
Who fix’d this floating ball;
Now hail the strength of Israel’s might,
And crown Him Lord of All.

Crown him, ye martyrs of your God,
Who from His altar call;
Extol the stem of Jesse’s rod,
And crown Him Lord of All.

Ye seed of Israel’s chosen race,
Ye ransom’d of the fall,
Hail Him who saves you by His grace,
And crown Him Lord of All.

Hail Him, ye heirs of David’s line,
Whom David Lord did call;
The God incarnate, man Divine;
And crown Him Lord of All.

Sinners! whose love can ne’er forget
The wormwood and the gall,
Go—spread your trophies at His feet,
And crown Him Lord of All.

Let every tribe, and every tongue,
That bound creation’s call,
Now shout in universal song,
The crowned Lord of All!

Merry Exmess from the nuclear ward.

∗ Philip White is undergoing medical treatment at the Flinders Centre for Innovation in Cancer.