If there was a certain inevitability about it all, it’s because it was clear, well before the election, that a right-hand-turn from King William Street to North Terrace – while a philosophical no-brainer – was also a fiscal liability and a practical implausibility.

But still the Libs persisted with their “properly costed” $37 million folly, as Steven Marshall thundered: “I don’t trust any modelling that this government has ever done with regards to traffic flow… let me tell you, trams turn right in cities right around the world – cities that are much larger than South Australia.”

Those same cities probably don’t take 30 years to decide what to do with prime city real estate or celebrate free wifi connections that actively disconnect patrons from the worldwide web, but that’s our lot I guess.

In any event, it was almost certainly the first time conservative firebrand Stephan Knoll advocated a position that didn’t involve moving to the Right.

For, in the end, he realised that a U-Turn was a far more inexpensive option than a right one.

It also, significantly, spelled the end of the Marshall Government’s monotonous claim that “we are keeping all our election promises”.

In truth, this isn’t even the first one to bite the dust, with the Government already quietly dumping an election promise requiring public sector superannuation funds to be locally administered after an outcry from unions and the Funds SA board about the potential impact on its $30 billion investment.

Key pledges to deregulate shopping hours and cap council rates appear similarly doomed, albeit this is down to the wonderful vagaries of parliamentary democracy.

The fact that the public appear largely unconcerned does raise the question as to whether keeping election promises is even a big deal. Or, given that some – such as the tram folly – were evidently made with such little forethought, whether we’d prefer them to only keep the ones that weren’t made on the fly and actually make no sense in the cold light of day.

In any case, at least the Government is still forging on with its promised open hearings into ICAC maladministration inquiries.

Well, not according to Bruce Lander.

Indeed, as he pointed out twice to Attorney-General Vickie Chapman before this week, the revised legislation is, in his view, so compromised that in practice he would never opt to, um… put it into practice.

It is, he says, an “illusion” of transparency.

But then, it hasn’t been a happy few days for the ICAC Commissioner.

There’s been much sound and fury over recent weeks around the clandestine operations of the state’s anti-corruption watchdog, but what does it all signify?

We’ve discussed at length whether or not the Attorney-General breached the Act she oversees, the efficacy of a Government Bill to allow open maladministration hearings, the ethics of the Opposition asking loaded questions under parliamentary privilege… and the one thing we assuredly haven’t discussed is the ongoing investigation that prompted all this.

“What I’m saying is that the present system will not work,” he told a parliamentary inquiry this week. 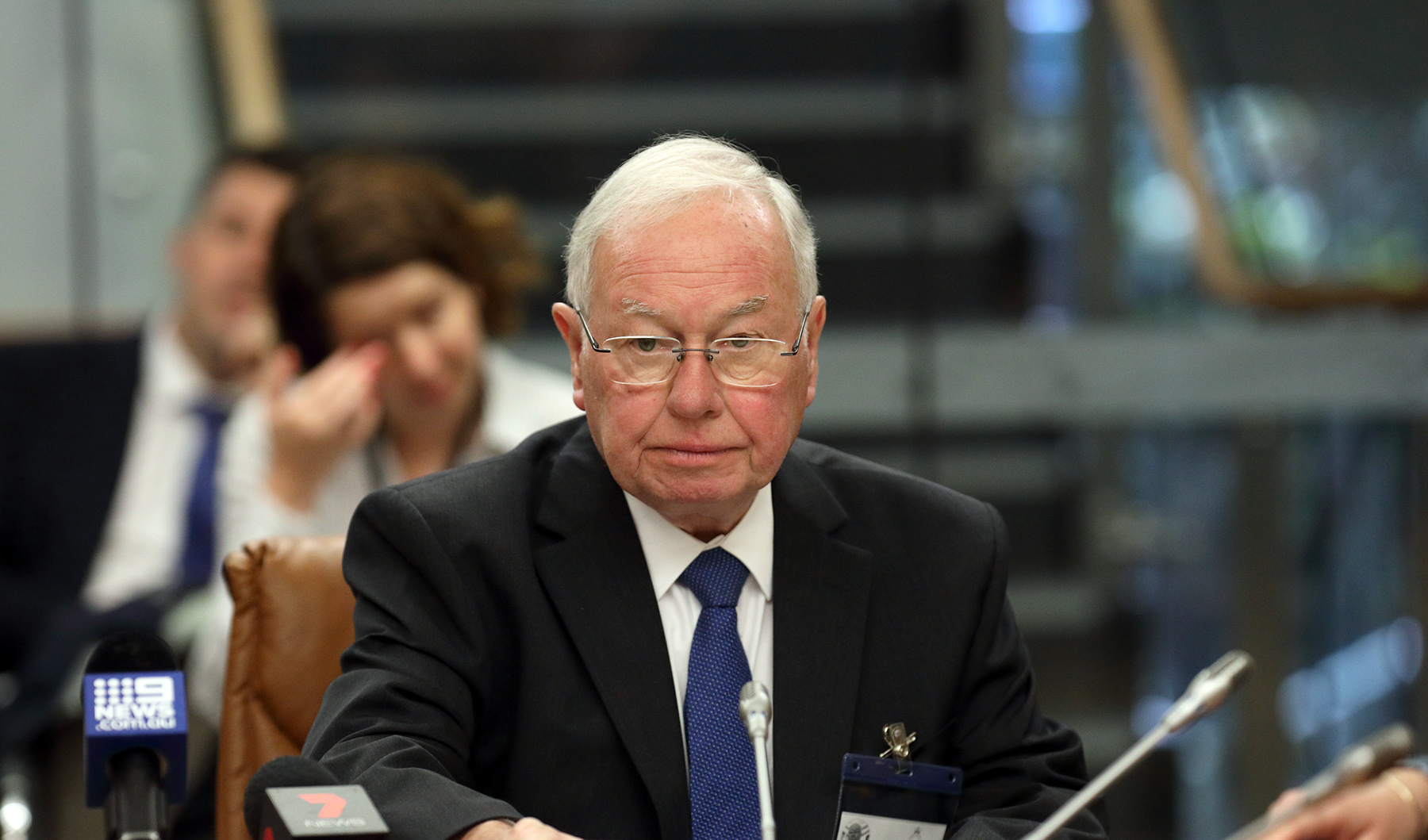 He made it clear he blames Labor frontbencher Tom Koutsantonis for invoking the spectre of ICAC in questions asked during an estimates hearing in September.

“After that time, everyone knew that I was investigating Renewal SA… that frustrates the media,” he told parliament.

It’s on this basis that Lander now believes parliament must reassess the use of parliamentary privilege, and either resolve not to use it to question ongoing ICAC – and police – investigations, or even enshrine its limitations via legislation.

This suggestion prompted a terse exchange on Tuesday, with Koutsantonis pointing out that “parliament has privileges for a reason, and those privileges are there to keep the executive to account”.

“Mr Koutsantonis, you can be sure of one thing,” the Commissioner loftily admonished.

“I studied constitutional law first in 1964, when I was lectured on the supremacy of parliament… I have accepted that as a proposition – and a proper proposition – since 1964. I also accept that there ought to be a parliamentary privilege to protect parliamentarians so that they can bring to the attention of parliament matters that need to be brought to that attention. I accept all that. The question is whether members will use that parliamentary privilege to bring to the attention of parliament some matters that will frustrate the proper investigation of corrupt conduct in South Australia. That is the question… which parliament ought to address.” 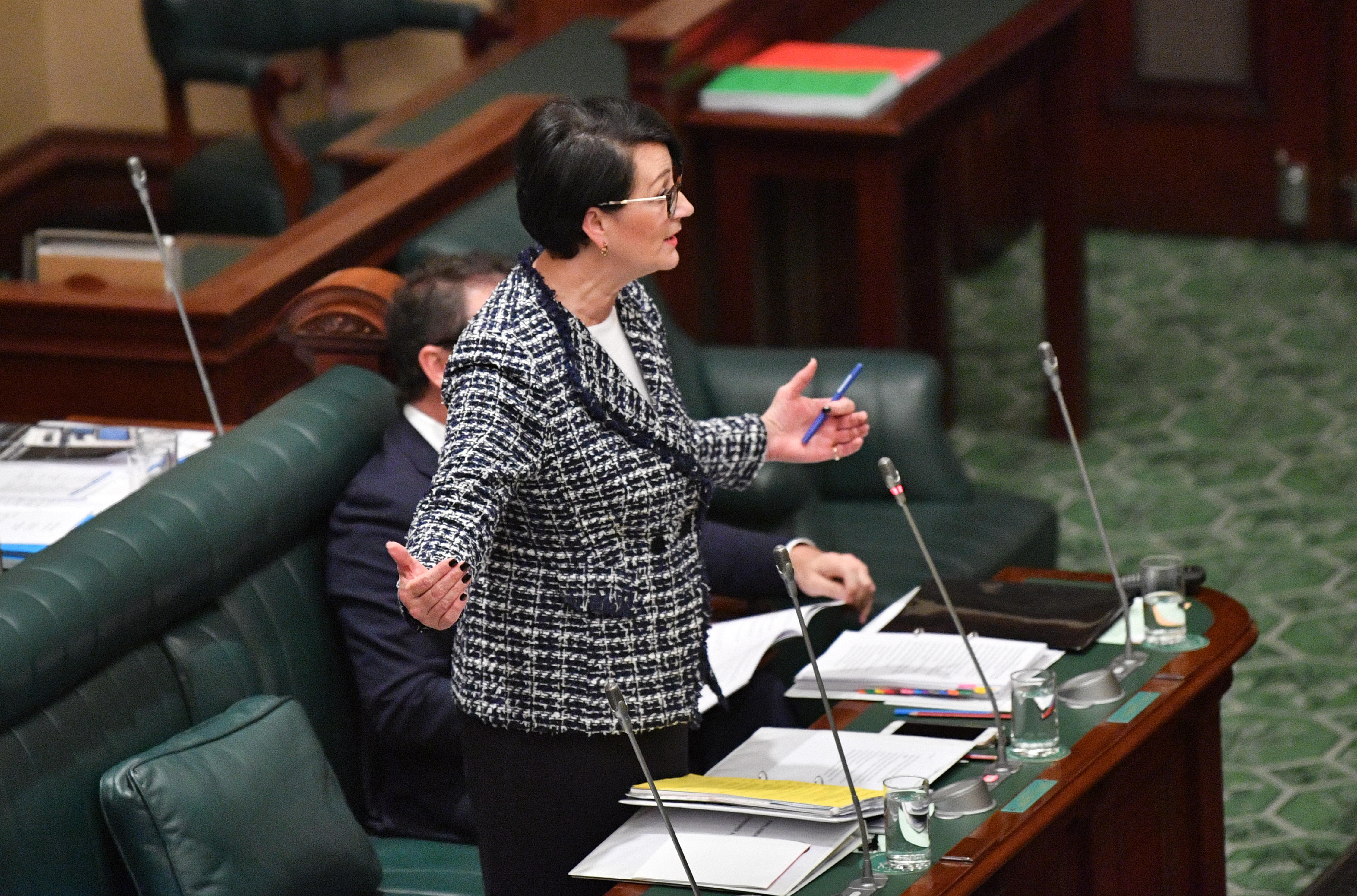 OK, so we know one thing at least – don’t get into a debate about constitutional law with Bruce Lander, unless you’ve been across your brief since at least the early 1960s.

Now, I’ve never studied constitutional law. Indeed, my only legal education was the crash-course in Media Law I took as part of my cadetship with NewsCorp back in 2003.

But I’ve worked as a reporter in SA since that time, employed across four different newsrooms.

So I can at least assess the Commissioner’s assertion that it was Koutsantonis’s questions that spilled the beans about his investigation.

“After that time, everyone knew that I was investigating Renewal SA,” he said.

Surely not. Especially given that these leading, but hypothetical, questions were never answered in estimates. And crucially, they certainly weren’t reported.

Neither, indeed, was Attorney-General Vickie Chapman’s bland-but-controversial statement linking ICAC to the matter at hand: “I have enquired of the Independent Commissioner Against Corruption, Mr Bruce Lander QC, as to whether there is any further information that can be made available on this matter. He confirmed that there is not.”

No-one is suggesting Koutsantonis breached any law, whereas the same cannot be said of the Attorney-General

In fact, as far as the public was concerned, the first time ICAC was ever officially cited in the discussion was when the Commissioner himself assented to Chapman’s statement being published.

So in reality, as far as the broader dissemination of information went, questions in parliament and Chapman’s media statement were negligible, because the media responsibly self-regulated based on their own legal advice – which, in the event, was evidently better than that of Chapman’s own office. 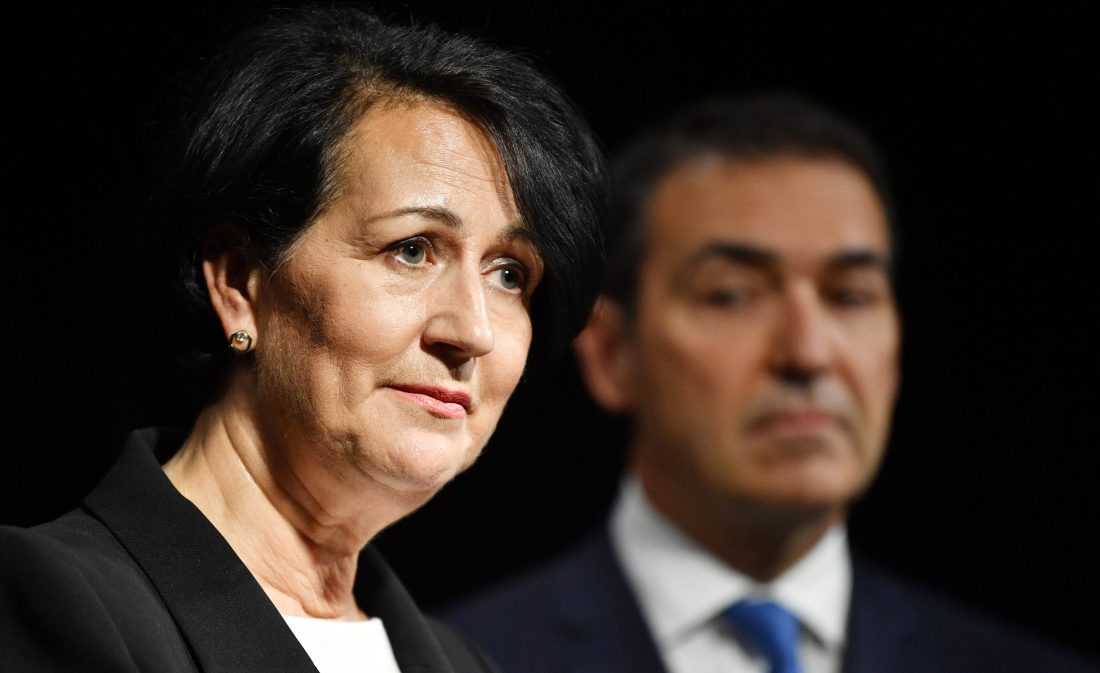 Oddly, Lander now makes it clear he’s more aggrieved about Koutsantonis’s role in all this than of Chapman’s.

In reality, though, neither of them contributed a great deal to the broader public awareness of his ongoing investigation.

Surely then, the fundamental distinction is that no-one is suggesting Koutsantonis breached any law, whereas the same cannot be said of the Attorney-General.

Lander is merely concerned that Koutsantonis might have used the law in a way that saw “politics trump principle”.

And, having covered politics since 2003, I’m gonna go out a limb here and invoke the ‘no shit Sherlock’ rule.

For if there’s a specific profession that can be relied upon to engage in politics, it’s politicians.

By definition, in fact.

But Lander appears to think that this behaviour is unprecedented.

“It was unusual, it was novel,” he told ABC Radio Adelaide yesterday.

“It hasn’t occurred before in the last five and a half years of the operation of my office [and] it gave rise to the result that persons who wouldn’t have otherwise been identified in public… were identified – and that’s contrary to the spirit of the Act, the spirit of which is to protect people from reputational harm until such time as they’re prosecuted in the courts.”

Did it, though? Did it really give rise to the identification of the subject of an ICAC inquiry?

Certainly not in the broader media.

Not until the Commissioner himself authorised the publication of Chapman’s statement, presumably believing the proverbial cat was too far out of its proverbial bag.

Moreover, is it so unusual?

Koutsantonis joked on Tuesday that no-one had used privilege in this way previously because “I haven’t been in opposition long enough”, prompting Lander to again admonish him.

“Well, when you were in government, Mr Koutsantonis, nobody else did it.”

But that’s not strictly correct.

Take, for example, this exchange during Question Time in November last year – at a time former Mental Health Minister Leesa Vlahos was likely giving her infamous evidence to an ICAC inquiry into the Oakden fiasco.

“Is the minister assisting the Minister for Mental Health aware of any government members being interviewed by ICAC in relation to the Oakden inquiry?” asked Opposition backbencher Sam Duluk.

The minister, John Rau, responded that “as members would know, to the extent that the ICAC is involved in matters it is not appropriate for there to be discussion about matters that occur there… so that is completely inappropriate”.

The then-Speaker, Michael Atkinson, even warned Duluk that “if he had gone on to name individuals [he] would have been committing a criminal offence under section 56A of the ICAC Act, but he is shriven by parliamentary privilege”.

That wasn’t the only such occasion either.

A month earlier, Duluk had asked how many “ministers and former ministers had sought state-funded representation in their dealings with ICAC”.

Of course, it’s possible that Lander wasn’t aware of any of this.

Because it wasn’t reported.

The Commissioner is clearly of the view that recent events suggest some relaxing of parliamentary standards in relation to his investigations.

It’s also arguable, though, that the reason such a situation has never arisen before is because the absence of a bureaucrat has never been made so obvious before.

In that regard, there is an antecedent for this whole debacle, albeit one that predates ICAC SA.

In terms of balancing public interest questions with reputational harm and the law, it is redolent of the circumstances that occurred when former Labor minister Bernie Finnigan was arrested on child pornography charges.

Under law, media were not permitted to identify him until he entered a plea – which didn’t happen for several months.

But his sudden resignation from cabinet could not go unreported. 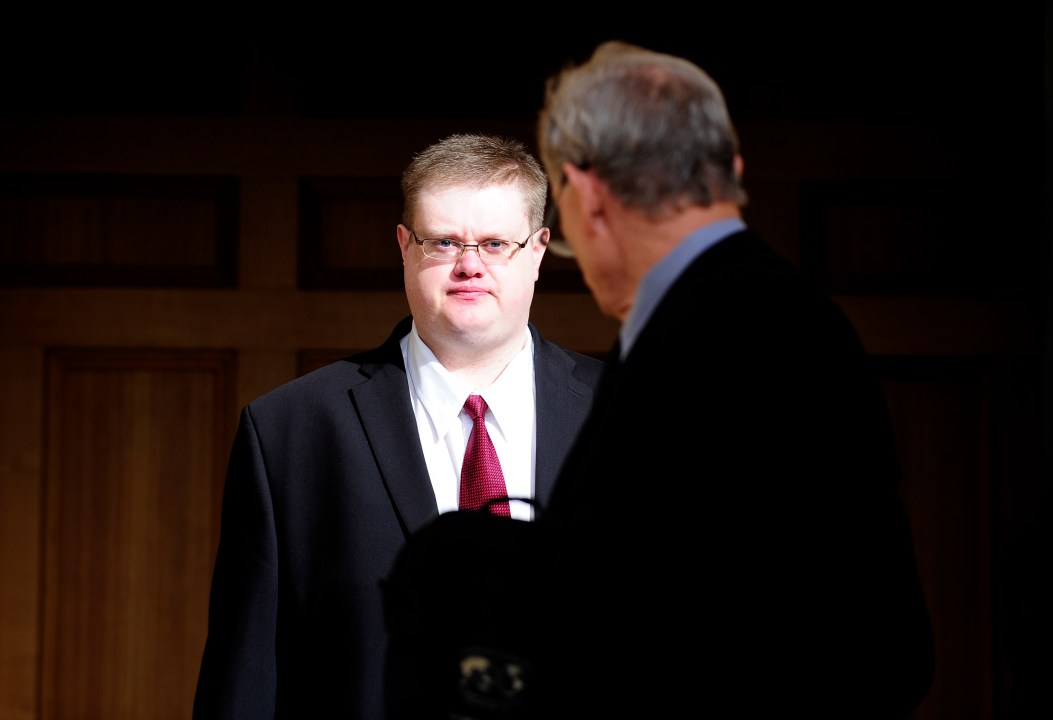 Knowing that the law precluded media identifying the fallen Labor frontbencher, did the then-Opposition take the high road, dutifully awaiting due legal process?

“Where is Bernard Finnigan MLC, why is he not in the chamber, and when will he resume his seat in this place?” Liberal David Ridgway asked the then-Government in Upper House Question Time in June 2011, several weeks after his arrest.

Or simply an aggressively robust expression of the right of an Opposition to seek answers?

It’s a matter of perspective, I guess.

It hasn’t been a great few days for Bruce Lander: a magistrate has questioned the manner in which he’s exercised his powers, he’s conceded that the “wheels have fallen off” the ICAC Act in SA and finally, today, former BioSA boss Jurgen Michaelis has been acquitted of an abuse of public office charge that followed an ICAC investigation.

Michaelis even, reportedly, stuck the boot in outside court, telling the Advertiser the Bio SA board “knew there was nothing wrong in any way, and I guess the minister is still asking himself what this was all about… it appears only the Commissioner has a different view of this matter and a different view of the world”.

The ill fortune could be compounded with a Labor move to refer Lander’s office to be independently reviewed, as InDaily reports today.

So, while Labor and the Libs can trade barbs about a tramline that can’t turn right, they appear to have reached a consensus of sorts this week.

They’re both at loggerheads with the state’s Independent Commissioner Against Corruption.