When Scott Morrison parachuted into the prime ministership, he was anxious to remove outstanding barnacles quickly. Now that he’s foolishly created one of his own, he needs to bring a similar sense of urgency to dealing with it.

Having cabinet ministers scrapping publicly over whether Australia’s embassy should be relocated from Tel Aviv to Jerusalem is adding to the perception at home of government disunity and fanning the friction the issue has already caused with our neighbours.

We’ve had Treasurer Josh Frydenberg backing a move (and attacking the anti-Semitic record of Malaysian Prime Minister Mahathir Mohamad), and Defence Industry Minister Steve Ciobo opposing it, declaring “the current location of the embassy is the right location”.

When Defence Minister Christopher Pyne was asked yesterday why a delicate foreign policy decision had been played out in public like this, he responded: “You’ll have to ask the people who are making those comments.”

Pyne irritated Frydenberg into the retort that: “Chris has been giving his opinion freely on this matter for quite a while, so I don’t know what got into his Weeties this morning.”

Foreign Minister Marise Payne, invited to urge colleagues to keep their views to themselves, said primly but sensibly: “I always think discretion is the better part of valour.”

While everyone is piling into the debate, the Government is supposedly undertaking a “process” to make a decision (something missing before Morrison opened the ruckus prior to Wentworth).

But, let’s face it, the “process” could be adequately gone through in a week.

Experts in the Foreign Affairs and Trade department, Defence, the military, the intelligence agencies, the Prime Minister’s Department, and relevant overseas posts are on top of the facts and the arguments.

Then-foreign minister Julie Bishop examined these when Donald Trump was preparing to move the United States’ embassy; she reported to Malcolm Turnbull and ministers that there was no case for Australia to follow suit.

In the context of the current debate, the material could be speedily put together for cabinet’s national security committee.

Morrison has said a decision will be made by Christmas but there is little point in letting it drag on – or at least the disadvantages outweigh the advantages.

Those at home and abroad who hold firm positions aren’t going to change them.

Admittedly being in the middle of the “summit season” is a complicating factor. Perhaps Morrison doesn’t want to have to explain a decision face-to-face when he meets various leaders at the coming G20.

As has been widely observed, the Prime Minister is now in a no-win situation. If he opts for the status quo, he angers the right in his party and the Jewish lobby; he’d also be accused of bowing to the pressure from Indonesia and Malaysia.

Morrison is going to be under attack whatever he does. It’s a matter of looking for the least worst way out

If the Government approves the embassy move, it will infuriate these neighbours and probably lose the free trade deal with Indonesia.

The longer a resolution is put off, the more Morrison is likely to be pushed towards a shift because the loss of face in admitting there wasn’t a case will become greater.

Ideally he needs some compromise. One option would be to say that Australia will set up a consulate in Jerusalem, while keeping the embassy in Tel Aviv.

Let’s be clear: we don’t need a consulate in Jerusalem. The two cities are only about an hour apart by road. The diplomatic resources would be better used elsewhere.

But the imperative now for Morrison is damage control – trying to prevent the Indonesians delivering a blow to trade, and attempting to stop fresh breakouts by the right of the Liberal Party.

The consulate route would bring criticisms from those on both sides of this argument. But Morrison is going to be under attack whatever he does. It’s a matter of looking for the least worst way out. 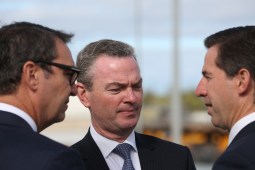 Apart from the diplomatic aspects, on cost grounds a consulate could be established relatively quickly and cheaply. Shifting the embassy would take a long time and a great deal of money.

Labor has strongly opposed moving the embassy, although it has not yet formally spelled out how it would handle the situation if it won the election and inherited a decision to shift it.

But if the Government did approve a shift, Labor could be expected to announce that in power it would reverse the decision, making for a clear point of difference at the election.

Journalist and author Michelle Grattan has been a member of the Canberra parliamentary press gallery for more than 40 years and is currently a Professorial Fellow at the University of Canberra. This article was first published on The Conversation.