At last the war is over, four long, sad years. Yesterday I went to its closing ceremony at the War Memorial on North Terrace.

And a moving ceremony it was.

There on the spot, Remembrance or Armistice Day 100 years on raised issues for reflection.

One was that no matter how great or solemn the occasion, Australians as a mob just don’t like singing the national anthem they’ve been told to sing. It isn’t good enough. We must admit that to ourselves.

Another was my own baby boomer cred, my right to share and be moved by the moment of the 11th hour, the 11th day and the 11th month.

My maternal grandfather lost his left leg on the Western Front. I have his discharge certificate, I remember his stump, and for years I had his crutches. My uncle, after whom I am named, perished in the Sandakan Death Marches near the end of World War II – malnutrition, malaria, machine-gunned or worse, his family will never know.

I’ve visited his simple memorial in the war cemetery on Labuan, an island off Borneo. His younger brother, my father, served in Papua New Guinea. On Anzac Days, Dad would designated-drive his mate, the state secretary of the RSL, to various functions.

So as much as a member of a gilded generation without military service can, someone who hasn’t seen bullet or bayonet, I think I get what they went through.

What I don’t get is why the authorities who urge us to never to forget our fallen of the Great War should remove, without asking, the earliest memorial to them from its community, where it has been for more than 100 years.

And then stick it in a side street on the other side of town.

By this, I mean what has become known as the Dardanelles Cenotaph. There has been more written and spoken about it in the past few years than the previous 100 it spent quietly in the South Parklands.

Yesterday it was described as the first cenotaph of its kind in Australia but I would say in the world, because the Australasian soldiers had only just begun to stem the bleeding when it was dedicated on September 7, 1915.

Now it sits on the far end of Anzac Walk on Kintore Avenue, far from its home. Talk about portable heritage gone wrong: the Dardanelles Cenotaph might be closer to the War Memorial and the RSL now, but with it have gone all the intriguing stories about it and its people, the communities it represented.

How Walter Torode, who built it, used it to draw attention to his housing development in Wayville. How the cenotaph memorialised the young men of the teeming West End and the emerging Unley, and how their mothers and their sisters made sure it did.

How a tight-arsed city council stopped maintaining the wattle grove and pergola at the cenotaph’s original location on Sir Lewis Cohen Avenue, and in 1940 moved it the few 100 metres to South Terrace where there was an army camp, to save a quid.

All the mystery of the Dardanelles Cenotaph, why it was there, is gone now. Now it is another war memorial in the middle of a footpath. 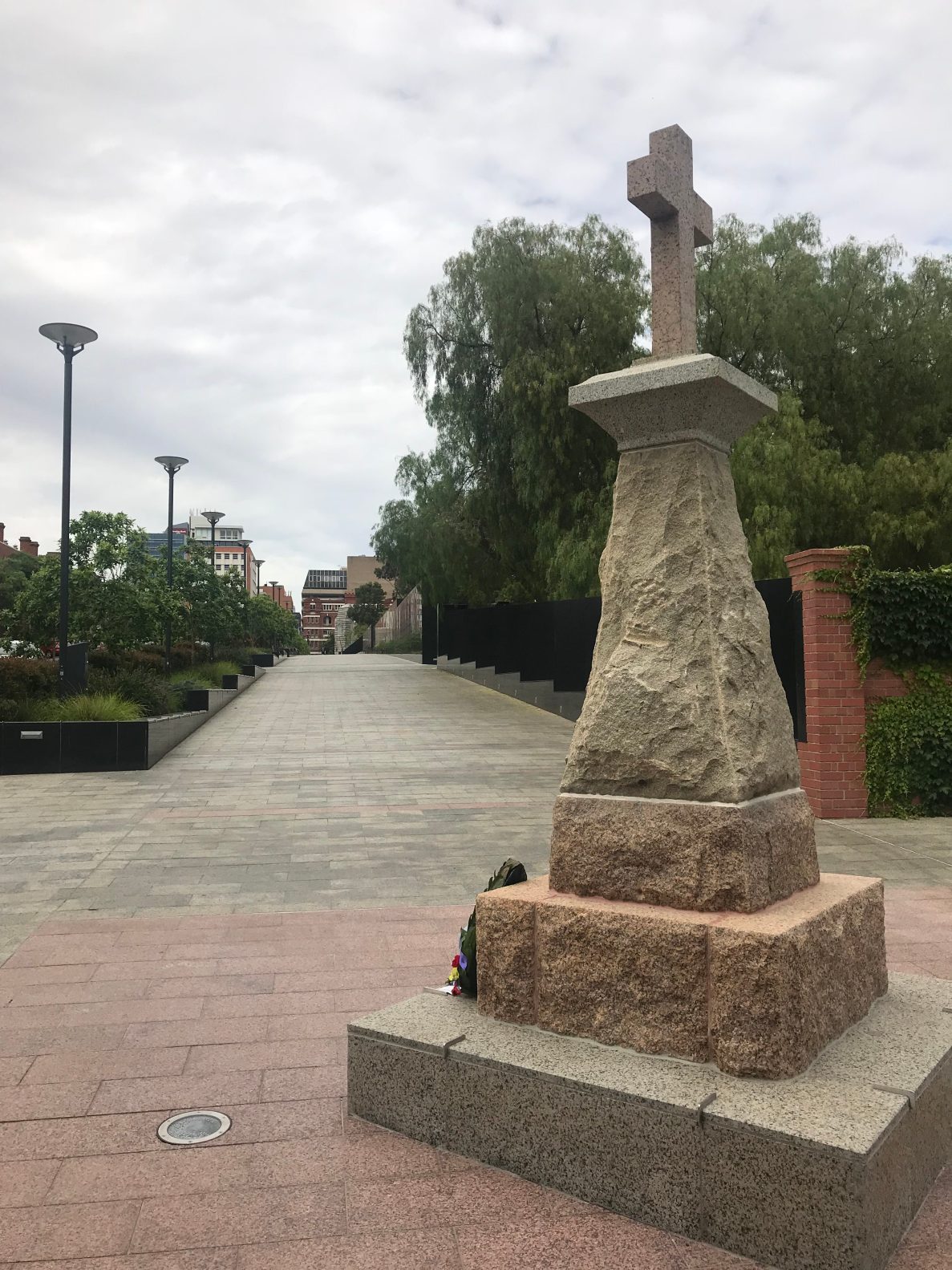 The cenotaph in its new position on Kintore Avenue.

You can see why they’ve done it though. If the cenotaph is Australia’s first, then Anzac Walk, in its one-dimensional mural greyness, is Australia’s longest photocopy. The Dardanelles Cenotaph gives it at least some grit, some granite, some grunt.

The cenotaph was “re-dedicated” at its new address yesterday, having somehow lost 103 years of sacredness around, say, the fleshpots of Grote Street. At this secondary ceremony, which was attended by a smallish crowd, we were told that the cenotaph had been largely forgotten until 2013.

To be fair, ex-servicemen brought it back into the limelight then. However, that turned out to be preparation for yesterday’s event. As consolation, those who fought to keep the cenotaph where it belongs hope for restoration of its original wattle grove as an Armistice Day memorial.

But the point that our war memorials should belong to the communities of those who fell and served and not to institutions – the government, the council, the ex-service associations – has been lost on those institutions with the Dardanelles Cenotaph.

All I ask is this: would you take a war memorial out of Maitland and plonk it in Minlaton?

Lance Campbell is an Adelaide journalist.