There is a certain irony in the fact that, as it stands, the federal coalition’s biggest political asset in South Australia is first-term Premier Steven Marshall.

After all, throughout his term-and-a-bit as Opposition Leader, Marshall’s federal colleagues did him few favours.

Months out from a 2014 election the state Libs were overwhelmingly favoured to win, the Abbott administration publicly goaded Holden to quit the state – which the carmaker duly did, allowing Jay Weatherill to bizarrely turn a massive economic liability into an electoral boon.

The election thus lost, days out from a by-election that was expected to see the seat of Fisher return to Liberal hands, the Coalition’s Defence Minister mused that he wouldn’t trust Adelaide-based shipbuilder ASC to build a canoe – allowing Jay Weatherill to bizarrely turn ongoing economic uncertainty into an electoral boon.

Then, the feds opted to turn a politically-devastating mid-term statewide blackout into a sneering ideological war that helped give Labor a platform on which to fight this year’s state election – allowing Jay Weatherill to bizarrely turn a national humiliation into an electoral boon.

You get the idea.

Through all of this, Marshall was stuck in an awkward political limbo: caught between loyalty to his partisan affiliation and the expedience of trying to distance himself from a federal government whose local stocks were well on the wane.

So he must allow himself some quiet satisfaction that recent polls show his State Government flying high, even as his federal brand-mates clatter to earth.

Indeed, there’s some chance that, as of next March when New South Wales goes to the polls, Marshall will become the only state Liberal Premier on the mainland (albeit less chance given NSW Labor’s perpetual propensity for own-goals, the latest chapter of which is unfolding today).

Ah SA, you contrarian rascal: trust you to finally elect your first Liberal government in 16 years just as everyone else is voting them out!

But this likelihood alone raises strategic questions for Marshall.

The spectre of coast-to-coast state and federal governments of a single hue is a rare one in Australia’s political life.

As we’ve seen in recent hours with the US midterms, voters are wont – consciously or otherwise – to use such interstitial ballots as a chance to re-balance the political landscape. 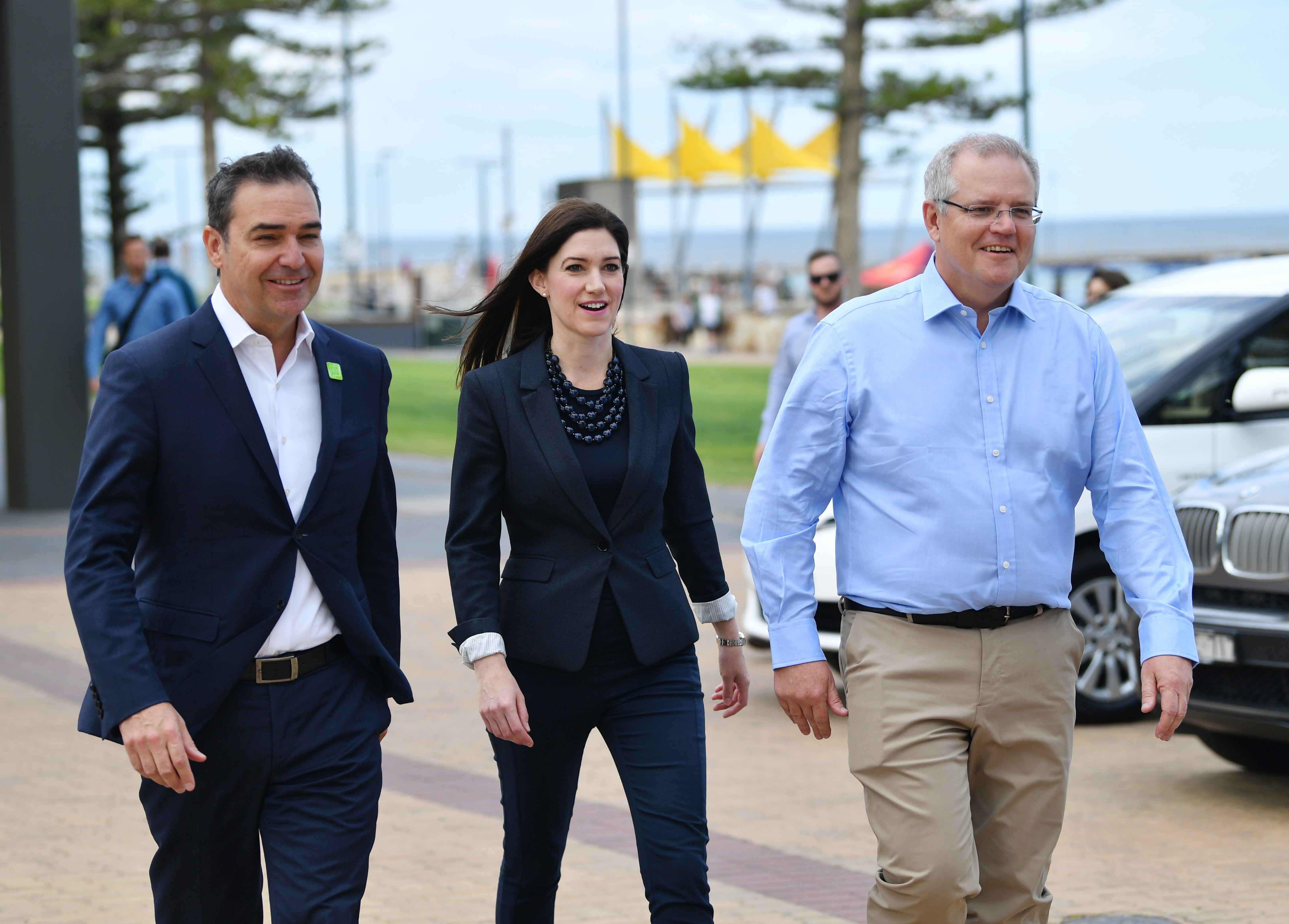 Marshall’s natural inclination is to be a consensus politician.

As far back as 2014 – and again this year – he made a virtue of his ability to “work with Canberra”, to cooperate with the feds, rather than pick fights with them.

Hours later he attended a media conference with Tony Abbott, who was ostensibly in town for a $100 million defence procurement announcement – the obvious politicisation of which was one of the Liberals’ crucial missteps in the dying days of the campaign.

Indeed, his slogan in the recent campaign was “Standing Up for SA”, a gambit intended to remind voters of his various stoushes with the Commonwealth. 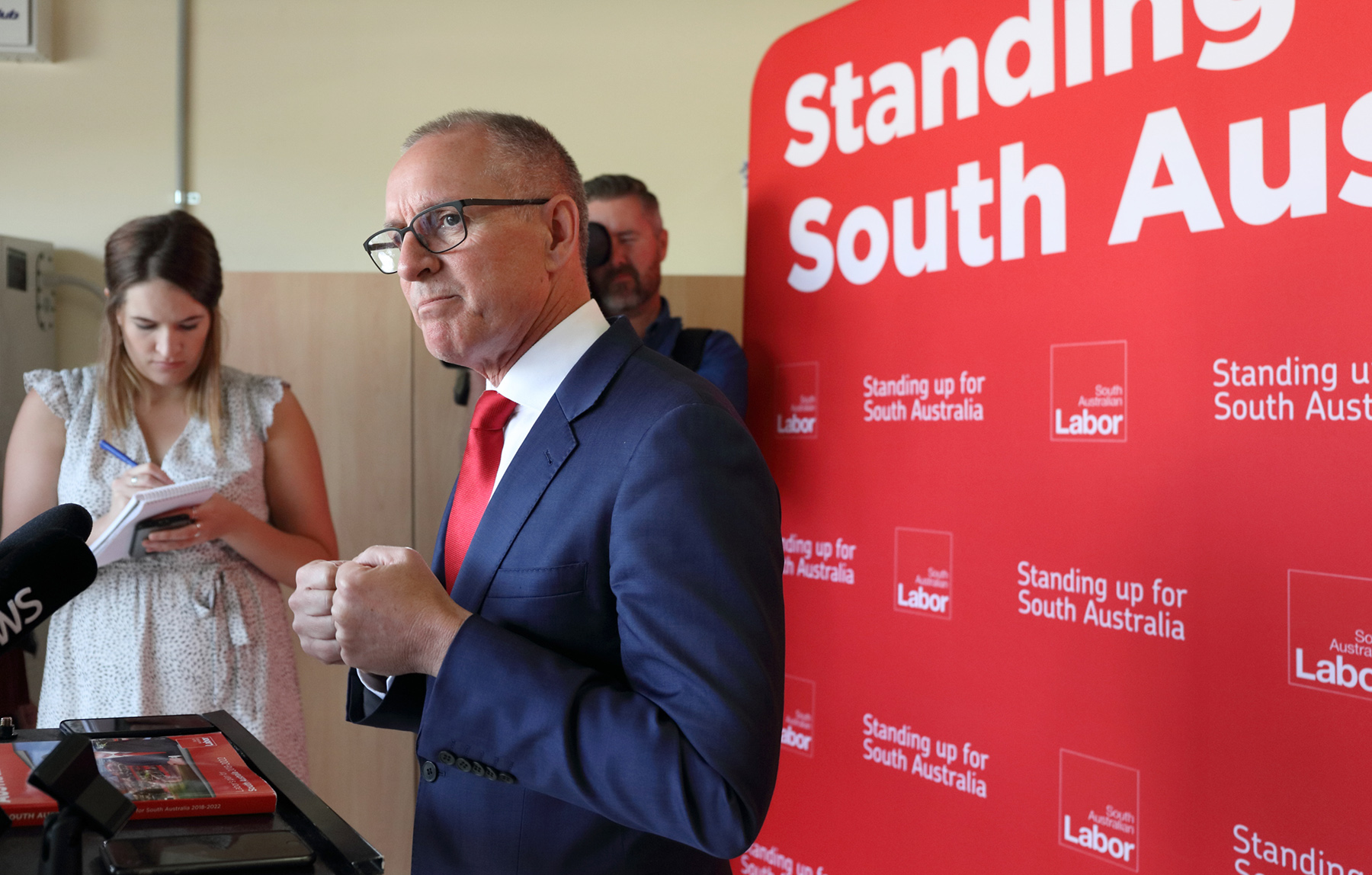 Jay Weatherill at the scene of his infamous confrontation with Josh Frydenberg in a garage at West Beach for the final press conference of the election campaign. Photo: Tony Lewis / InDaily

The strategy was two-fold: it drew a battleline between state Labor and an unpopular federal incumbent (apart from the few months during Turnbull’s brief honeymoon when Weatherill feigned a newfound co-operation) – and reinforced the perception of a marginalised state Opposition.

Marshall’s tack as Premier has been quite different.

He’s continued to reinforce his close Commonwealth ties, arguing that SA will ultimately benefit more from a collegial approach than a bellicose one.

The recent Newspoll figures for the months since the latest Lib leadership wrangle showed federal Labor leading the government 58-42 in SA – a remarkable nine percentage point turnaround since July-August, when the Coalition led 51-49 in this state.

Put simply, SA has gone from the federal party’s strongest state to its weakest.

It’s unlikely this will have been helped by Scott Morrison’s recent Queensland roadshow, a week spent making his case to a state culturally and economically largely irrelevant to local voters, in which the PM did his best to emphasise his ‘Queenslandness’ with his reliance on a grab-bag of phrases such as ‘fair dinkum’, which I have personally never used, nor ever heard anyone use in real life or ever known anyone who a) ever uses it or b) has ever used it, ever. 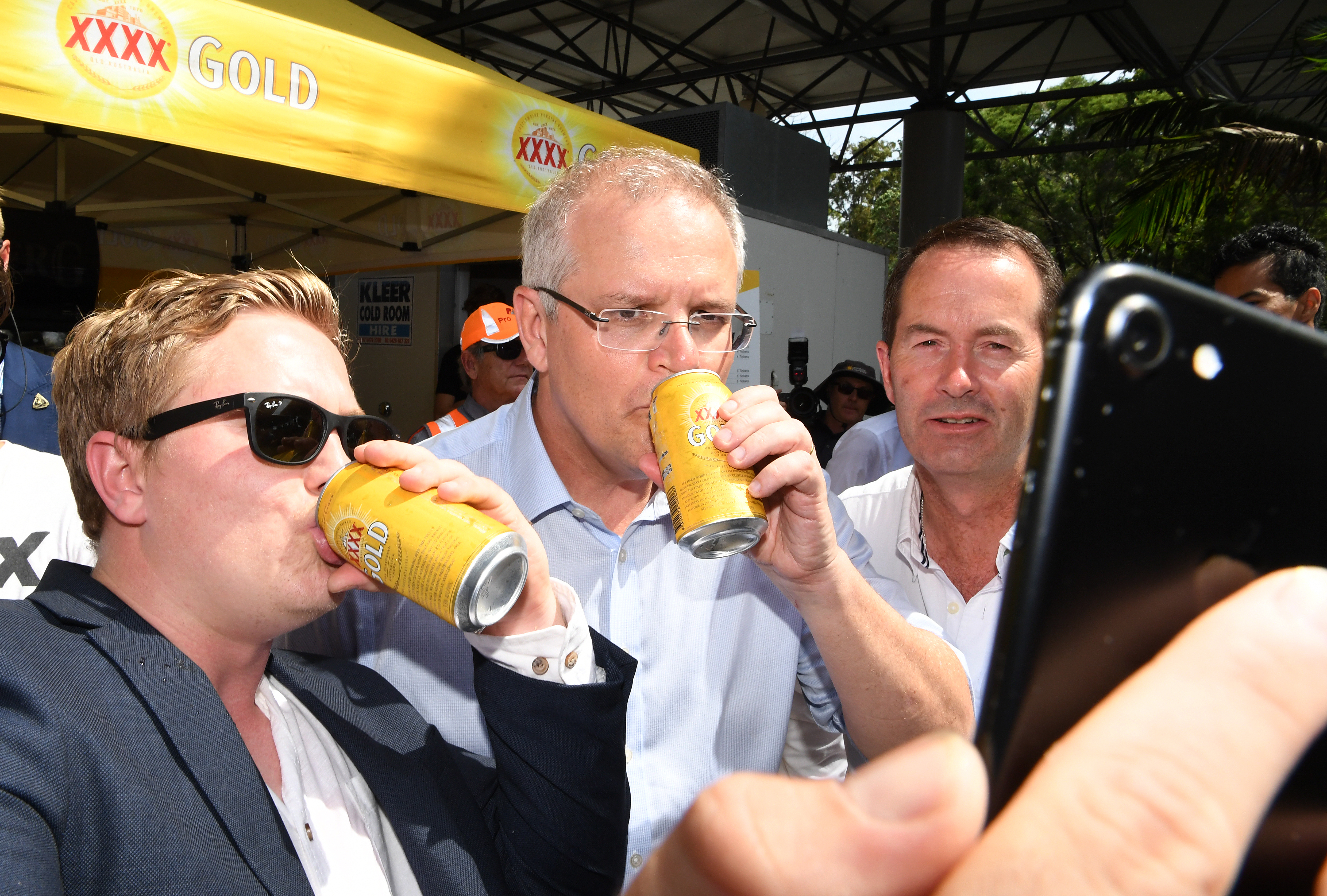 Once again, it seems the federal Coalition’s political interests and Marshall’s are at fundamental odds.

Morrison needs to drum up votes in Queensland and NSW, but the recent redistribution makes SA largely irrelevant to his plans.

If the polls don’t substantially recover, the Libs can probably write off Boothby in the southern suburbs and, if things worsen, Christopher Pyne will be increasingly nervous in Sturt.

But unless there’s a bloodbath, SA will be a bit player in the next federal campaign. Which means it will be largely left to Marshall to sustain the Liberal brand.

Marshall vows to play a different tune on federal-state relations

And it’s increasingly clear his honeymoon is being cruelled by the antics of his federal colleagues.

Weatherill was a wily politician, but he was the beneficiary of a single political gift without which it’s unlikely he would have survived beyond 2014.

The removal of the strife-riven Labor Government and Abbott’s subsequent ability to allow Weatherill to play the tragic hero of the Holden narrative was fundamental to SA Labor’s electoral success.

And in much the same way, while he’ll be loyally doing his bit for a Coalition victory (and in particular for the survival of his moderate mentor Pyne), Marshall’s own fortunes could well be best served by a Shorten Prime Ministership.

The aura of inevitability about the Labor leader’s rise is one of the legacies the federal Coalition will long ponder; as a presumptive PM, there is nothing remarkable about Bill Shorten, and a good deal that is unremarkable.

But a Labor Government will necessarily prompt some fundamental reconsideration of Marshall’s approach: the sales pitch that SA can reap the benefits of a close working relationship underpinned by partisan alliance will be turfed.

Its replacement will test a Premier whose political playbook has always emphasised consensus over conflict.

But it could also be the making of his second term.