You know you’ve been in the media a while when you start to see the kids of people you’ve worked with getting jobs in the industry.

It’s a fairly common phenomenon in media – children following in the parents’ reporting footsteps – and for me it’s always raised the obvious question: why?

Or, if you feel more inclined: Why. The. Hell!?

It’s always puzzled me how a kid can grow up seeing their parent pulling long hours, working weekends, presumably coming home annoyed every other day because the story they slaved over all day got ruined by a subbing error or errant name super, and complaining about the fact that everyone they deal with on a daily basis gets paid more than they do, and think: “Yep, that’s the job for me all right!”

And yet, it seems to happen with alarming regularity.

Which is probably because, to be fair, journalism is a trade that speaks to a particular (and peculiar) type of personality, and for all of the above it is also frequently absorbing, compelling and perversely rewarding.

Perhaps this is the same reason there are so many family dynasties in politics.

It is, in many ways, a pretty thankless job. And yet, there they all are: the Weatherills, the Chapmans, the Evanses, the Goldsworthys… and that’s just in SA. Further afield, there are the Bairds, the Newmans, the Palaszczuks, the Anthonys, the Beazleys, the Creans… and, of course, the Downers.

There must be a certain masochistic urge that drives the scion of career politicians to choose the same path. True enough, that path may have a few obstacles removed – the influence of party elders and brand recognition can be useful assets for aspiring politicians. But while, without really lifting a proverbial finger, you inherit all your parents’ political friends, you also inherit all their enemies. And while brand recognition may help you within the party, it also means you inherit the legacy of all your forebear’s failures.

Take the curious case of Georgina Downer in Mayo. A smart, articulate candidate, seemingly well-regarded across the Liberal factional divide. And yet it’s highly doubtful that even the most well-turned-out nominee would be allowed to jet in from interstate and snare overwhelming endorsement for a seat – were they not the offspring of that seat’s longest-serving MP.

But having garnered preselection for Mayo – initially back in May, for the July by-election – it’s fair to say the Downer moniker has been far more of a hindrance than a help.

The electorate has seen the younger Downer’s return to contest the seat as evidence of a ‘born-to-rule’ mentality, a subtle assumption that the voters are being taken for granted.

This might go some way to explaining why the voters made their collective voice so resoundingly heard when they so strongly re-endorsed Rebekha Sharkie – with Labor barely figuring at all in the by-election result.

But it’s fair to say Downer herself did all she conceivably was required to do. Moreover, it seems wildly unlikely that any other Liberal candidate would have snared the seat in any case. Might they have got a better result? Who knows.

But the biggest campaign failures were not Georgina Downer’s.

They were her father’s.

Alexander’s frequent presence on the hustings, while designed to remind voters of the halcyon days of his Howard-era grip on the seat, merely underlined the notion that this was more about the passing of a dynastic baton, a transaction to which the voters were expected to do little more than politely applaud from the sidelines.

And then his pompous election-eve social media sledge at the Sharkie supporters who had brought “such horrible hate” to his beloved Hills electorate – “you must all be new arrivals,” he chided – underlined how oblivious he was to the looming disaster.

Not that he was perturbed: after the result, he doubled down on the lorded-gentry persona by declaring: “Our family have been nation-builders, we’ve helped to make this nation great.” 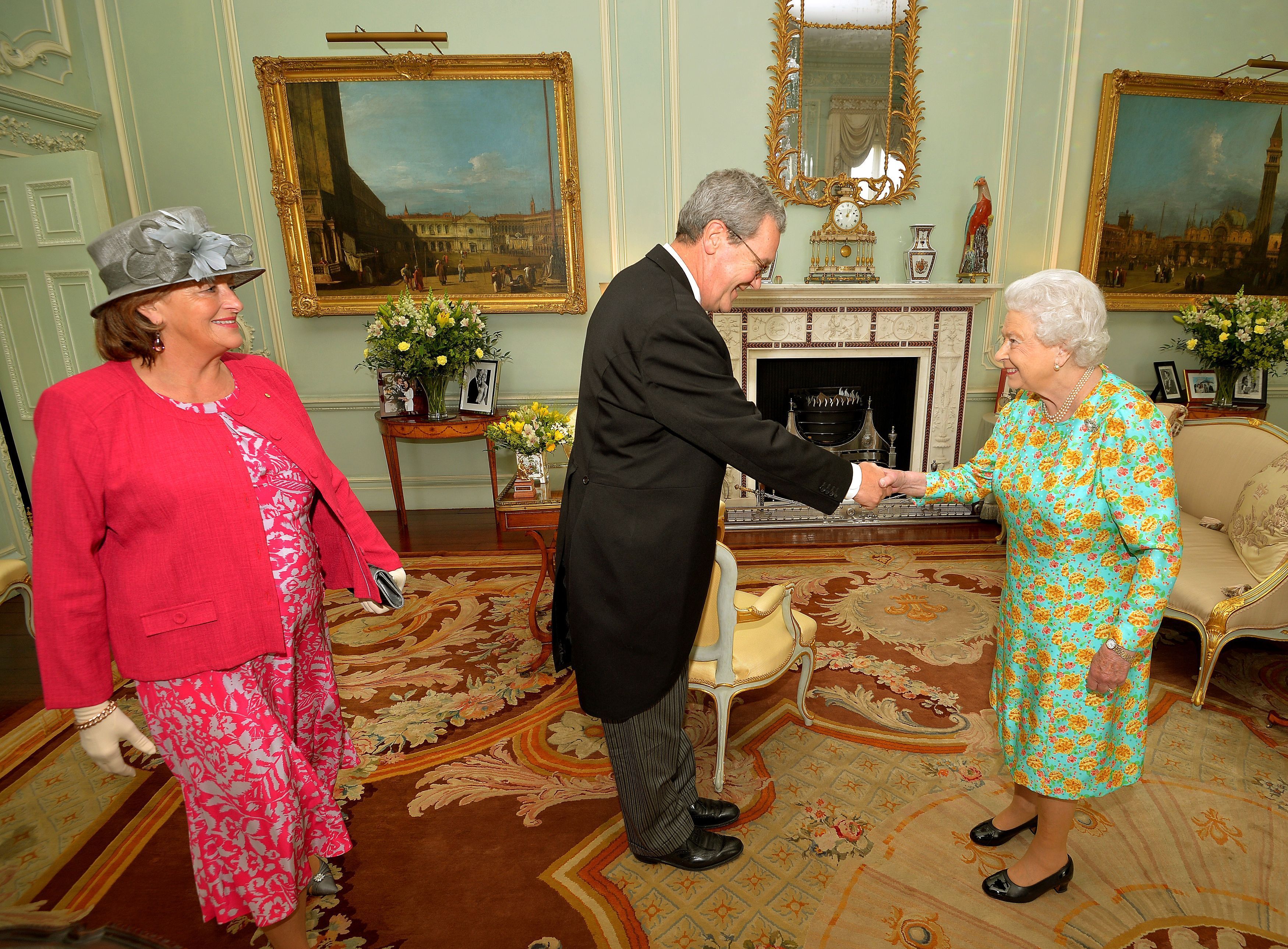 Strangely, the Downers have not managed to dispel their ‘born-to-rule’ aura. Photo: John Stillwell / PA Wire

And now, his latest helpful foray into his daughter’s election campaign: the former Foreign Minister used the platform of his Australian Financial Review column to heap scorn on the Australian electorate in general, and those that elected Sharkie in particular.

Sure, it may be churlish that the elder Downer’s every public utterance must have a bearing on his daughter’s campaign – but by including Sharkie in what he calls a “disparate group of opportunists” whose ultimate success would “paralyse” government, he invites it.

And by framing an entire column around the notion that the voters are largely responsible for the general crappiness of Australia’s political class over the past decade – “You’re never happy,” he chides condescendingly – he has doubled down on the half-spoken notion that the result in Mayo was not a reflection on the Liberal campaign, but on the voters’ collective ineptitude.

Through all of this, his various interventions have been met by a collective sigh within Liberal ranks. The response from various insiders suggests either that they have felt unable to tell him to shut up for the sake of his daughter’s campaign, or that he simply won’t listen.

So it’s worth recalling that it was not so long ago – indeed, as recently as last year – that some Liberals were actively pushing for Alexander Downer to return to SA and lead them to the March state election.

The notion of Downer – then serving as state Liberal president and a United Nations envoy to Cyprus – returning to lead the long-suffering Libs out of the wilderness was seriously pursued in 2012 and early 2013, with a concerted push to install him in the safe seat of Schubert, where then-incumbent Ivan Venning was retiring. But Isobel Redmond’s sudden resignation as leader short-circuited the machinations, ensuring Steven Marshall took over instead. Right-winger Stephan Knoll, now a senior minister and presumptive Treasurer-in-waiting, was preselected in Schubert a month later.

But amid Marshall’s own travails, the Downer solution never quite went away. Indeed, The Advertiser even included him as a “preferred Premier” option on one of its opinion polls, with the results showing strong support for the romantic notion of the Liberals’ elder statesman returning to lead the state. 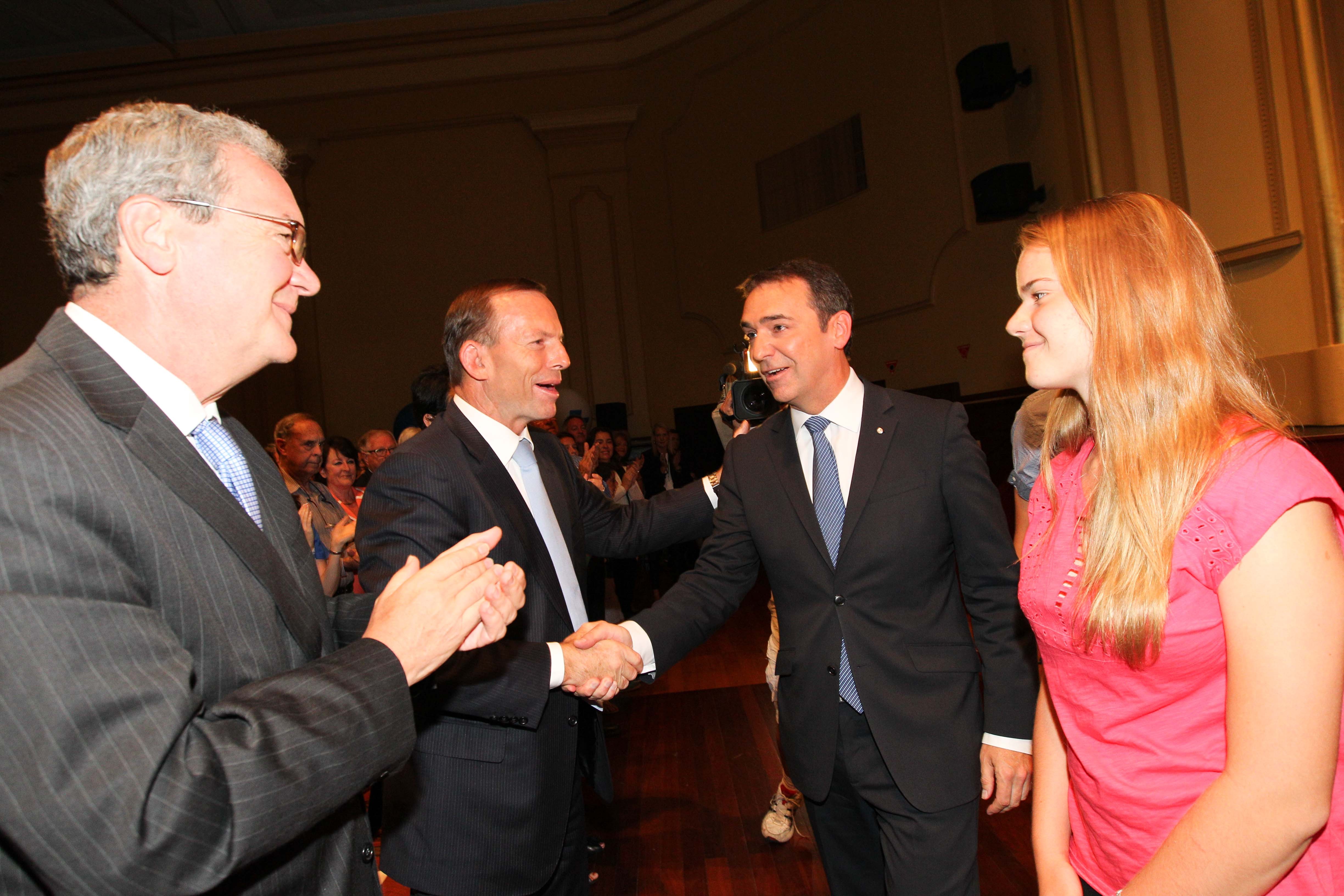 While reports in the Financial Review at the time were derided locally, there was a second concerted push among Liberal conservatives to bring Downer back from London – when he was serving as Australia’s High Commissioner – with a view to replacing Marshall, whose stance on nuclear storage had left some high-profile business leaders unimpressed.

At the time, a source told InDaily: “It was mooted but it fizzled out… the preconditions he wanted just wouldn’t have been delivered – they couldn’t be delivered.

“He wanted everything to come on a plate, and politics isn’t quite like that.”

So it’s worth pondering what might have been had all of these efforts not been in vain.

They were driven by the notion that Downer – the nation’s longest-serving Foreign Minister – was well-regarded as a safe pair of hands and a key exponent of the most electorally successful government of the modern era.

But let’s face it – the foreign ministry is the easiest place to stay out of trouble for a decade or so in domestic politics.

And on recent evidence, the whole enterprise seems more likely to have ended in a manner more reminiscent of Downer’s previous foray into party leadership:

I suspect Alexander saw the notion of him returning to SA as its presumptive Premier as something akin to Moses descending Mount Sinai to impart the wisdom of God upon His subjects. In truth, it would be more like the denouement of that Biblical episode, wherein Moses dropped his bundle and completely destroyed the party below him.

His tin-eared interventions in local politics suggest a profound misunderstanding of the current electoral climate, and an inability – or unwillingness – to revise his script.

And the fact that party insiders expect him to be wholly unreceptive to advice suggests a Premiership doomed to failure in every regard – if indeed, the whole enterprise ever made it that far.

For, on recent evidence, the long-mooted Downer comeback would probably have doomed the party to 20 years in Opposition.

Those who were actively contemplating such a move must now be feeling like they dodged a bullet – even if they aimed it at their own heads.

As for the Mayo campaign, Alexander seems unable to remove himself from the fray. Like the well-loved family car lent to an L-plated offspring, he seems determined to be a vocal back-seat driver.

But it seems that every time he opens his mouth, he costs his party political capital – and his daughter votes.

Perhaps his former colleagues haven’t quite worked out how to break it to him, but this is the advice they would dearly like to impart: “Alexander, thanks for your service, it is greatly appreciated. But please stop trying to help with the campaign.