“Round up the usual suspects!”

It was a catchcry made famous by Captain Renault in Casablanca, when the Vichy France police prefect would respond to any given disturbance by barking the instruction to his subordinates.

But it’s more or less the same instruction issued year after year to the unfortunate news reporters sent to the annual budget lock-up for assorted interest groups, looking for reaction quotes.

There, the “usual suspects” peruse the budget papers until the obligatory embargo lifts, at which point they line up to give their two cents.

You can almost pick the main budget strictures from the talking heads towards which the news cameras gravitate: if there’s a big bad new bank tax, for instance, it will be Business SA; if there are a raft of new public sector “efficiencies”, the PSA.

And, in the days thereafter, the usual suspects will mobilise. Every year. Without fail.

How effectively they mobilise, of course, varies from year to year.

Public sector union boss Nev Kitchin yesterday assured reporters that the PSA-led industrial action had prompted “no riots” in the state’s correctional facilities, and that “everything is under control within the prisons”.

Less so outside of them, though.

Protesting prison officers hurled abuse at staff remaining at the Remand Centre before taking to the streets to rally against budget cuts. They vow to continue the privatisation fight. https://t.co/F7JseYybYs #saparli #SABudget2018 @mikesmithson7 #7News pic.twitter.com/J9CsQZxTVS

You could credibly argue that yesterday’s show of force, with hundreds of prison officers caught on camera storming the Adelaide Remand Centre and berating the worker who remained at his post, did little to generate public sympathy for their cause.

And what is their cause exactly?

Well, broadly, that we have a Liberal Government.

And more specifically, that the government is following budget efficiencies that, the narrative would have it, are broadly consistent with us having a Liberal Government.

The fact that the specific number of public sector jobs targeted under those efficiencies is only marginally more than those identified in Labor’s last mini-budget is evidently neither here nor there.

Neither is the fact that the Libs so-called bold “privatisation agenda”, it seems, consists of outsourcing a single maximum-security prison facility in the CBD, and the vague threat of selling off a couple of health services if they don’t lift their game.

Which, compared to Labor’s own “privatisation agenda” – which consisted of the state’s South-East forestry assets, the Motor Accident Commission, SA Lotteries and the Lands Titles Office, along with a bunch of buildings and the odd toe in the water of other sell-off options – is a bit of a fizzer, really.

Part of the problem with the sale of state assets is that the debate around them is about as sophisticated as that perennial bleat from Orwell’s Animal Farm: “Public ownership good, private ownership bad.”

Which, ironically, sits uneasily alongside the other overarching narrative in SA’s political life: that of the bloated public service and the private enterprise choked by an over-officious bureaucracy.

The point is, why do we seem to have collectively accepted this premise that while our state is a bureaucratic nightmare, shifting government assets into the private sector is inherently the Devil’s work?

Labor insiders will privately tell you that the state’s only privately-owned prison, the G4S-run Mount Gambier facility, operates as well as, if not better than, any other in the state.

Independent (and former Liberal) MP for Mount Gambier Troy Bell tells me that “most people I speak to who work out there think it’s a very good job and are happy working out there for G4S”.

Moreover, the privatisation of the Remand Centre shouldn’t have a job impact on anyone currently employed there.

So it does make one ponder whether the protest was a tad out of proportion to the budget measure.

Not that the Government will be changing its tune on account of it.

“No, zippo, zilch – whatever other word you want,” smirked Treasurer Rob Lucas (whose name, the chanting protestors had cleverly deduced, sounds a little like “Doofus”). 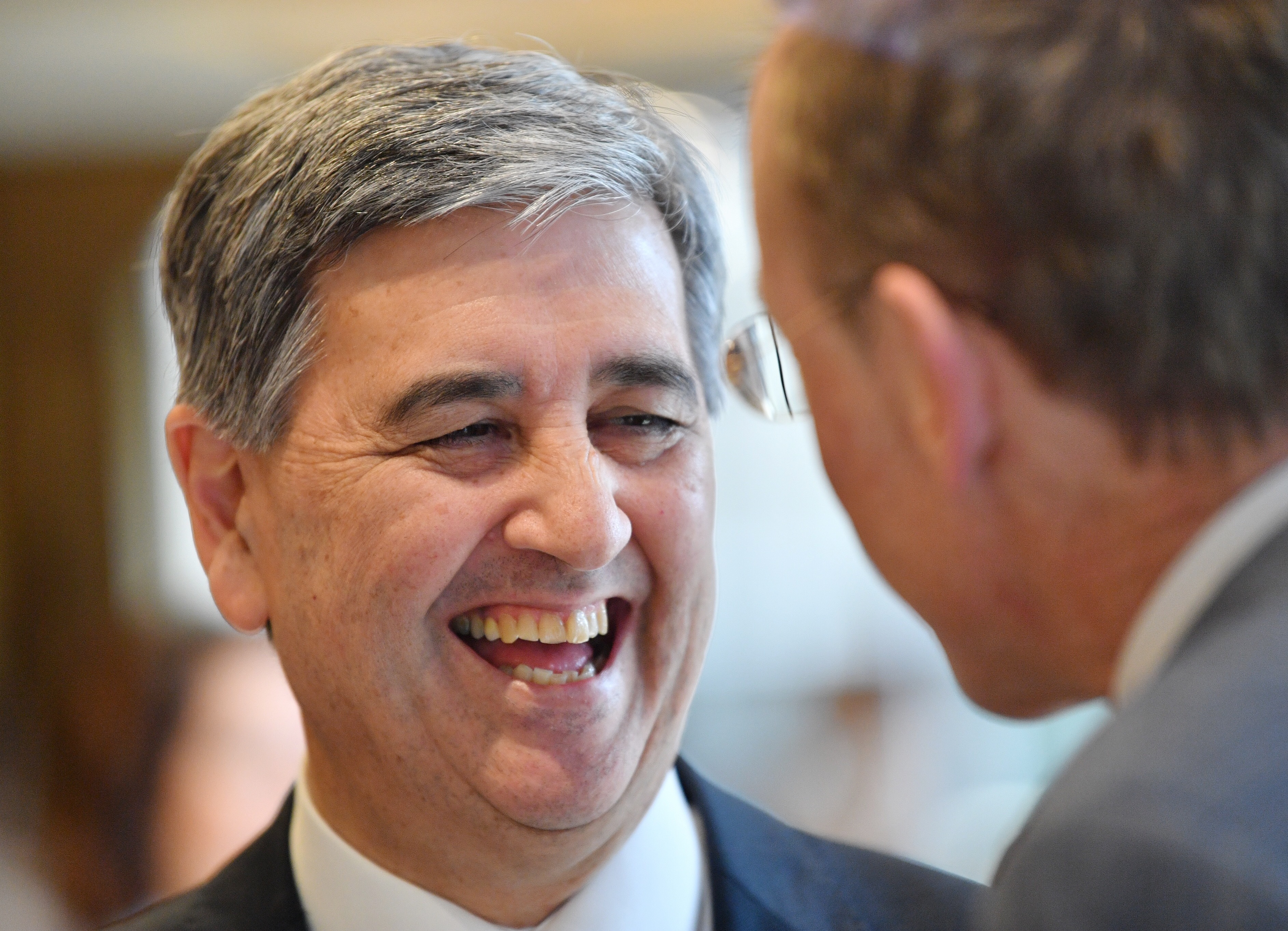 Lucas, of course, would be cock-a-hoop that his first budget has prompted such an outpouring of vitriol, such wailing and gnashing of teeth from those perennial Usual Suspects.

He’d be delighted that his budget, with savings and sell-off measures that would hardly have raised an eyebrow if they’d been delivered by a Jay Weatherill or Tom Koutsantonis, is being derided as so stereotypically ‘Liberal’.

Because in reality, the truth at the heart of the Libs’ first budget in 17 years is indeed redolent of Animal Farm, but not on account of its crushing authoritarianism or political brutality.

No, rather the quote it brings to mind is that at Orwell’s denouement, wherein “the creatures looked from pig to man, and from man to pig, and from pig to man again; but already it was impossible to say which was which”.

Which found an eerie echo in a post-budget critique on the popular “clean energy news and analysis” website ‘Renew Economy’ last week, which noted: “The theme was clearly ‘pro-transition’, and that was the clear intent of the government and its advisors – so much so that it was hard to tell the difference between the Liberals and the previous Labor government on most issues.”

That was even before the Libs spent the weekend talking up their subsidy scheme for solar batteries and re-announcing Labor’s February revelation that German battery giant sonnen would establish its Australian headquarters in Adelaide and assemble and manufacture 50,000 energy storage systems locally over the next five years, creating more than 430 new jobs.

Which fed neatly into the analysis of Renew Economy editor Giles Parkinson, who noted the Marshall-led Libs seemed “remarkably unfazed” by their Canberra colleagues’ repeated attacks on SA’s recent penchant for renewables.

“Indeed, the Steven Marshall-led Liberal government actually appears excited by the fact that the state will, according to AEMO’s Integrated System Plan, based on current policies and building intentions, reach around 73 per cent renewables by 2020, and 100 per cent by 2025,” Parkinson wrote.

Which suggests the renewable energy lobby have noticed something about the new Government that the other Usual Suspects haven’t quite cottoned on to yet: they’re pretty much the same as the old government.

It suits the ALP narrative too, of course, to paint the parties as a world apart on policy, perpetuating one of the great ironies of modern politics.

That while we have never been more divided in partisanship, we remain in an age of remarkable economic policy consensus.

Arguments for the right to govern, then, tend to be less a question of ideological zeal and more claims of competence; hence, the Libs are reiterating ad nauseum statements about “fixing the Labor mess” – a mess so profound, apparently, that a budget deficit was able to appear and then disappear again within the space of mere months.

The Liberal mantra, then, is reminiscent of that old Pro hart carpet ad, with the new Government walking into the Treasury offices to exclaim: “Oh Mr Koutsantonis: what a mess!”

There’s no doubt Koutsantonis’s recent surpluses have been predicated on some nifty accounting tricks – not least strategic sell-offs and the odd new tax to bolster the bottom line – but so too was Lucas’s much-maligned 2017-18 deficit. Of course, the new Government had nothing to lose and everything to gain by bringing forward spending such as $146 million for the National Redress Scheme for sexual abuse of children in government institutions, a measure that allowed them to simultaneously do the right thing by victims while decrying Labor’s lack of funding for the measure and blowing the budget further into the red.

The trick with any political solution, after all, is to first convince people that there’s a problem.

It’s apt that the Usual Suspects are out in force this week, for the prevailing political mood reminds me of that line from the 1995 movie of the same name: “The greatest trick the devil ever pulled was convincing the world he didn’t exist.”

In this case, the greatest trick the Libs have pulled could be convincing the state that the budget surplus didn’t exist – or at least that the deficit was out of control.

And, within six months of Liberal rule…like that, it’s gone!

Perhaps this week, though, they’ve gone one better.