The image I have in mind is of Rob Lucas, sitting desolate in an empty office amid the metaphoric rubble of the Liberal Party’s diabolical 2006 campaign, his dreams of a swift return to office – or, indeed, of ever returning – washed away in the relentless Rannslide.

If only their entire campaign premise – that the SA economy under Labor was fundamentally unsound – hadn’t been undermined by their own visiting PM John Howard proclaiming that the economy was in fact “fundamentally very sound” because of his own sterling management.

If only they’d had money to run more than one campaign TV commercial. And if only they hadn’t managed to misspell ‘Labour’ (sic) in the one they could afford.

He ponders what might have been: how South Australia might have changed had the Kerin-led Libs been allowed another chance in office. Their audacious plan to increase the speed limits on some city streets back to 60km/h; their generous bid to reduce land tax by a yet-to-be-specified amount. And, of course, his own bold gambit to cut the public service by 4000 full-time-equivalents.

Lucas sighs to himself, and then musters a grim resolve.

“Patience, Rob,” he silently vows to himself, fist clenched. “I’ll get those 4000 public servants… one day. One day.” 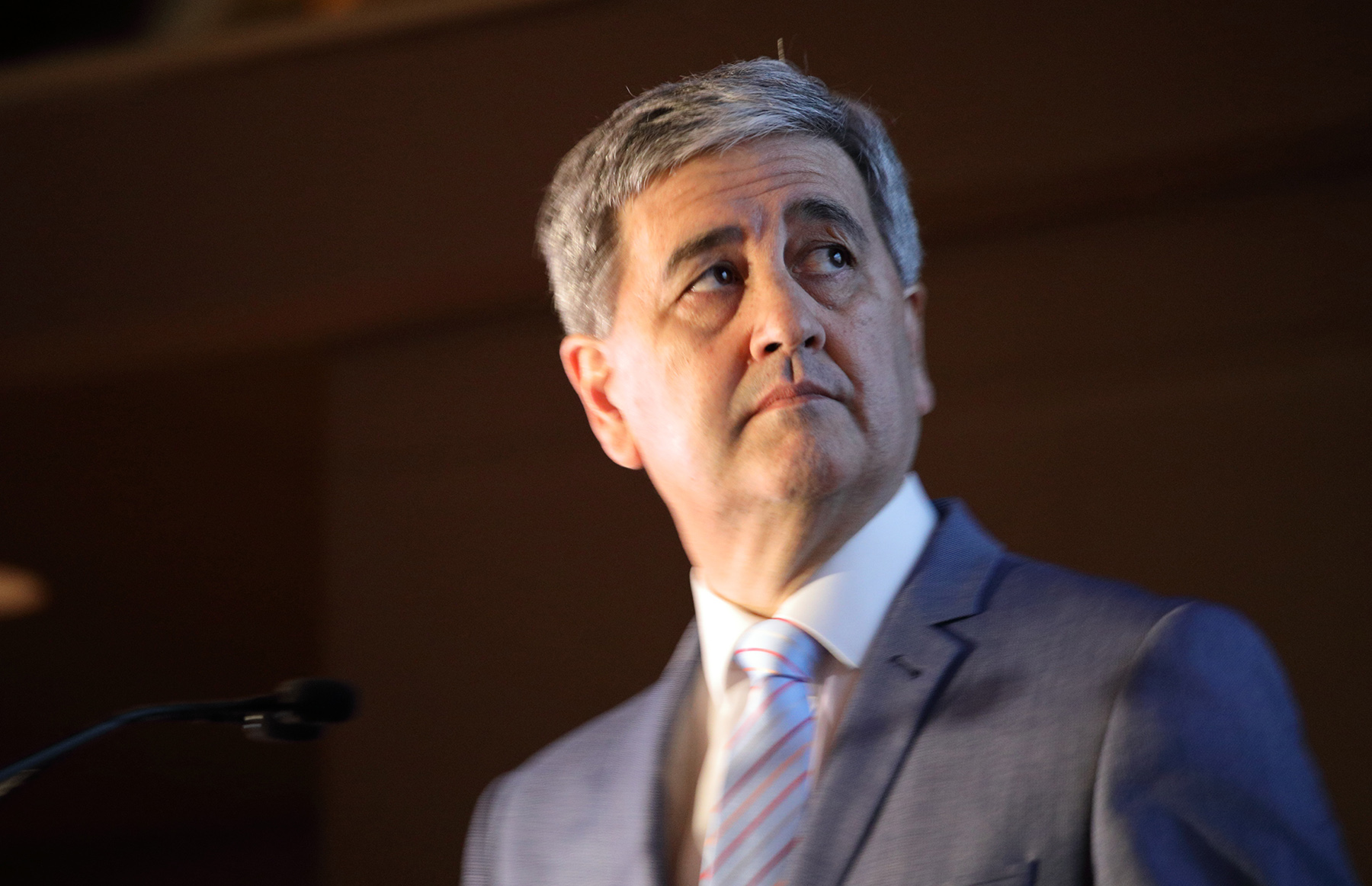 Fast forward 12 long years, and Lucas is finally back in the Treasurer’s chair – no mean feat, considering he’s weathered two further election defeats and his own demotion to the backbench in 2007 when his close personal pal Martin Hamilton-Smith argued it was time for generational change.

But now, at long last, the Libs are able to fulfil their long-held ambitions for land-tax relief, increasing random speed limits and, of course, axing 4000 public servants.

But while Lucas’s policy bent was considered radical back in 2006, these days it’s pretty much par for the course.

Indeed, the most surprising aspect of Lucas’s first budget in 17 years was the almost total absence of any surprises.

There are controversies, of course, but they were only a question of filling in the blanks. The Libs had long warned – as far back, indeed, as 2006 – that their budget savings would be predicated on eliminating, as they called it, ‘Labor waste’. They’ve certainly made no bones about the fact a range of programs and projects would fall by the wayside.

And Lucas’s 2018 budget foray was, indeed, relatively transparent and devoid of equivocation.

In his budget lock-up, he talked through a slide-show presentation that contained a long list of those very programs and projects that would be, as he put it, “discontinued, de-funded or axed”.

As far as budget detail goes, it was fairly comprehensive, if not exhaustive.

And, of course, he already made headlines with the strategic release of his plan to cull 4000 public servants.

In actual fact, this plan is little different from the one detailed in Labor’s own mid-year budget review – and the Libs could have quite easily spun the public service crackdown in different terms.

That it didn’t tells us something interesting about South Australia in 2018 compared to 2006.

In 2006, culling 4000 public servants was electoral poison. The Public Service Association railed against the measure, pouring a lucrative war-chest into TV commercials. They even managed to spell the name of their political target correctly.

In 2018, however, a cut of 4000 FTEs is considered relatively benign. So benign, in fact, that the Libs seem compelled to try and make their cuts sound more draconian than they actually are – namely, a mere 239 more FTEs than Labor had in its sights.

Indeed, when Lucas first flagged the 4000 figure 12 years ago, it was to come off a public service that boasted around 70,000 FTEs. Today, even if he manages to achieve his target, the sector will still have well over 80,000.

So as a proportion, it’s a smaller gambit – and likewise as a political flashpoint.

If there are political landmines for the Libs in the budget, they are less the result of an ideological war on waste, and more of political naivety

The key discernable difference from Labor, they will argue, is that they actually want to reduce the size of the public service – rather than front up year after year with arbitrary efficiency targets that are never actually achieved.

Indeed, the Libs must laugh (or cry) when they reflect on the pain they copped over their 2006 efficiency target; after all, it’s roughly the same target successive Labor Treasurers have been aiming for more or less every year since 2010.

Thus, the irony of the budget Lucas has waited half his working life to deliver is that it is barely an ideological document at all, much less a political one.

Agitators for a slash’n’burn budget have been left cold – most notably uber-dry economist Judith Sloan, who lamented in The Australian about the “slow pace of budget repair”.

It is, though, unsurprisingly consistent with the themes drummed into the fledgling administration by their invited New Zealand guru Wayne Eagleson, who warned against “blowing up” the public service in a single term.

If there are political landmines for the Libs in the budget, they are less the result of an ideological war on waste, and more of the political naivety of a Government whose advisors, by and large, probably don’t spend much time mingling on public transport, nor paying bills in service centres.

This is a state for which the outsourcing and relocation of a little-heard-of travel centre once somehow became a major, ongoing, political storm.

But let’s not forget that few metropolitan democracies do po-faced outrage quite like Adelaide.

This, after all, is a city-state for which the outsourcing and relocation of a little-heard-of government-run travel centre once somehow became a major, ongoing, political storm.

So the abolition of a bunch of service centres and bus routes could prove to be what politicians call ‘a hard sell’.

“I’m sure there will be concern and/or opposition,” Lucas noted on budget day regarding some of his austerity measures.

“These are not easy decisions – they’re very difficult, and they do have impacts [because] people become used to a continuing level of public subsidy.”

Still, I’ve long been of the view that SA, and politics in general, is overdue the odd hard sell.

It’s arguable, for instance, if Malcolm Turnbull had been more prepared to put electoral vulnerability up as collateral for policy principle, his leadership credentials could not have been so easily ripped apart.

But the looming problem for the Libs is one of realpolitik. Ironically for a party that won power, finally, by campaigning on a micro level, their budget seems lazily destined to impact most in a clutch of seats they desperately need to hold. That is, if they want to see out the three terms they appear to believe are necessary to see their public sector reform agenda through to fruition.

For instance, having narrowly seized the north-east seat of Newland from Labor’s Tom Kenyon – a well-credentialed campaigner who may yet recontest the seat in 2022 – the Libs have now mothballed planned park’n’ride upgrades for Tea Tree Gully and Klemzig and announced the closure of the Tea Tree Gully TAFE and the Modbury Service SA.

Does Rob Lucas not like Richard Harvey or something?

There’s also the potential problem that the responsibility for selling many of these more contentious measures – and fleshing out the detail – will fall to ministers who have barely been in parliament longer than they’ve been on the frontbench.

Stephan Knoll, a Liberal conservative from the Barossa, took on the task with zeal on ABC radio this morning, explaining to any city folk listening in that they shouldn’t complain about the odd Service Centre closure because “people in the regions have had to deal with this issue for a long time”.

“For instance, in my electorate – the Barossa – we have not one Service SA centre [so] we do need to make sure that we’re providing as good and equitable service as possible,” he noted.

The closure of seven TAFEs will also, inevitably, become a political slog for the Libs, but one in which Labor has already conceded plenty of high moral ground over their own inept handling of vocational training under successive ministers.

Which makes it odd, again, that the Libs – having been handed a Labor-commissioned report that decried the previous government’s oversight of TAFE in devastating terms – opted to table it in parliament on budget day, perhaps the single day of the year that it could be guaranteed minimal media attention or political traction.

While there’s something either comforting or terrifying (depending on your political predilection) about the fact Rob Lucas’s budget pronouncements have been as consistent as his hairstyle in the 17 years between drinks, it would be strangely apt if his surprisingly-unsurprising economic prescription was undone by the same thing that undid successive Liberal campaigns in the intervening years.

That they just couldn’t get the politics right.