As the federal circus rolled on toward this morning’s inevitable culmination (I was going to write ‘conclusion’, but that it was so inconclusive) former Labor Premier Jay Weatherill went for a brief stroll down memory lane.

He posted a link on his Twitter feed to a podcast interview he gave almost exactly a year ago, with the Guardian Online, in which he mused on the forthcoming state election – which he lost – and PM Malcolm Turnbull’s ongoing struggles with the Right wing of his own party. Which the PM will inevitably lose too. If not in the partyroom, then eventually, inevitably, at the ballot-box.

Weatherill’s reflection did not go unnoticed: his former Treasurer, Tom Koutsantonis, promoted it enthusiastically on his own timeline – indeed, noting that it was one of the few times a politician has been proven right.

It’s not often politicians are proven right, but this is a good example. https://t.co/0J4JJHbQjP

I’m not sure if Tom thought through the implications of his initial observation, but his conclusion is well worth exploring.

Back in 2017, Weatherill – who was then determined to make renewable energy a clear-cut electoral battleline – made the point that Turnbull knew “the right thing to do” on energy policy, but was hobbled by the conservative wing of the Liberal Party.

“What the PM needs to understand is this,” Weatherill opined.

“You can’t do business with these people… if you move away from the Emissions Intensity Scheme to the Clean Energy Target then they’ll want to change that to allow coal in. If you gave them that, the next [demand] is ‘tear up Paris’, and if you tore up [the Paris agreement] the next thing is they’d ask him to call a press conference and deny that he believes in climate change.”

Whatever you make of Weatherill, his party or his policy bent on renewables, you can’t deny that this was a fairly prescient prognostication.

Emissions targets that made sense three years ago when all countries were supposed to be in Paris and we didn’t need policy change and wouldn’t face economic dislocation do not make sense now. @TurnbullMalcolm take note.

The then-Premier went on, declaring the Liberal dissidents “insatiable”, and noting that there was “no benefit to the Prime Minister in trying to placate his Right wing because they are incapable of being placated”.

It’s true that for the Liberal Party in Australia, climate change – and the policy response to it – has become a weeping sore over several years, one whose creeping infection could prove terminal.

It’s like Europe has been to their political brethren in the UK – an intractable issue of policy and faith.

Since as far back as the 1970s, Europe has caused the Conservatives more political pain than any one issue rightly should, and still it continues apace.

For the federal Liberals, climate change – and energy policy generally – appears to be heading the same way.

Turnbull, after all, has been here before.

When he lost the party leadership to Abbott in 2009, the catalyst was the Opposition’s acceptance – or rejection – of an emissions trading scheme.

An inability to forge an unified position on climate change also contributed to the political demise of Brendan Nelson, whom Turnbull had himself knocked off as leader a year earlier.

Climate change may be the battleground on which the Liberals’ political reckoning has been played out for so long, but in truth this is no longer an arid ideological debate.

The ongoing divisions and failure to fashion a coherent policy platform point to a far simpler shortcoming – leadership.

More than any single policy dispute, the failure of every Liberal leader since Howard has been one of leadership.

Each and all have been hobbled by attempting to kowtow to factions they despise and by abandoning principles they had previously articulated as articles of faith.

And thus, Weatherill’s pointed reflection of today’s events in Canberra are pertinent. For there was a moment in Weatherill’s own premiership of which Turnbull should have taken heed when confronted with an affront from his enemies within. And he should have done it long ago.

Back in early 2014, weeks out from that year’s state election, ousted senator Don Farrell made an audacious bid to surf into state parliament, with his friend and right-faction colleague Michael O’Brien offering to stand aside for him in his then-safe Labor seat of Napier.

Weatherill, apparently, had rejected the notion, but the Right powerbrokers knew they had the factional authority to thumb their noses at him.

His response – during a live interview on ABC radio – was to threaten to resign if the deal went ahead. To stand down altogether – on the eve of a state election.

Needless to say, Farrell quickly backed off, O’Brien rode off into the sunset and his northern suburbs seat went to little-known AMWU organiser Jon Gee, the lucky recipient of the ‘Labor lunacy lottery’.

Napier, incidentally, was subsequently effectively abolished in the 2016 boundary redistribution, and replaced with the marginal King – which fell to the Liberals at this year’s poll – while Farrell ended up back in the Senate anyway. So he probably owes Weatherill a bottle of his ‘Godfather Cabernet’, or something.

But despite highlighting Labor’s factional divisions and reviving the tedious spectre of the ‘faceless men’, the episode gave the SA Premier something he had not possessed to that point: leadership credibility.

Little wonder that he tried to replicate the trick in his incessant battles with Canberra before this year’s election, highlighted by his (in)famous public spat with Josh Frydenberg.

By contrast, Turnbull has spent much of the prime ministership he so desperately coveted being dragged from pillar to post on policy – and on principle.

The champion of republicanism who refuses to tempt the Monarchist backlash. The climate change warrior whose repeated retreats on energy policy in the face of threats to his leadership leave him looking regularly craven and cowed.

It is too late now for Turnbull to change to the ‘back me or sack me’ tack.

It’s plausible the time for that was back when he floated a tax reform thought bubble in which “everything was on the table” – and then, despite cross-party state support from Weatherill and NSW premier Mike Baird, he took a GST hike off the table. Eventually.

It was reminiscent of the time Gordon Brown, the once-popular former British PM, allowed the ponderous notion of an early election to flourish, and then fester, until the moment had well and truly passed. And, by then, so had his credibility as a strong and decisive leader. 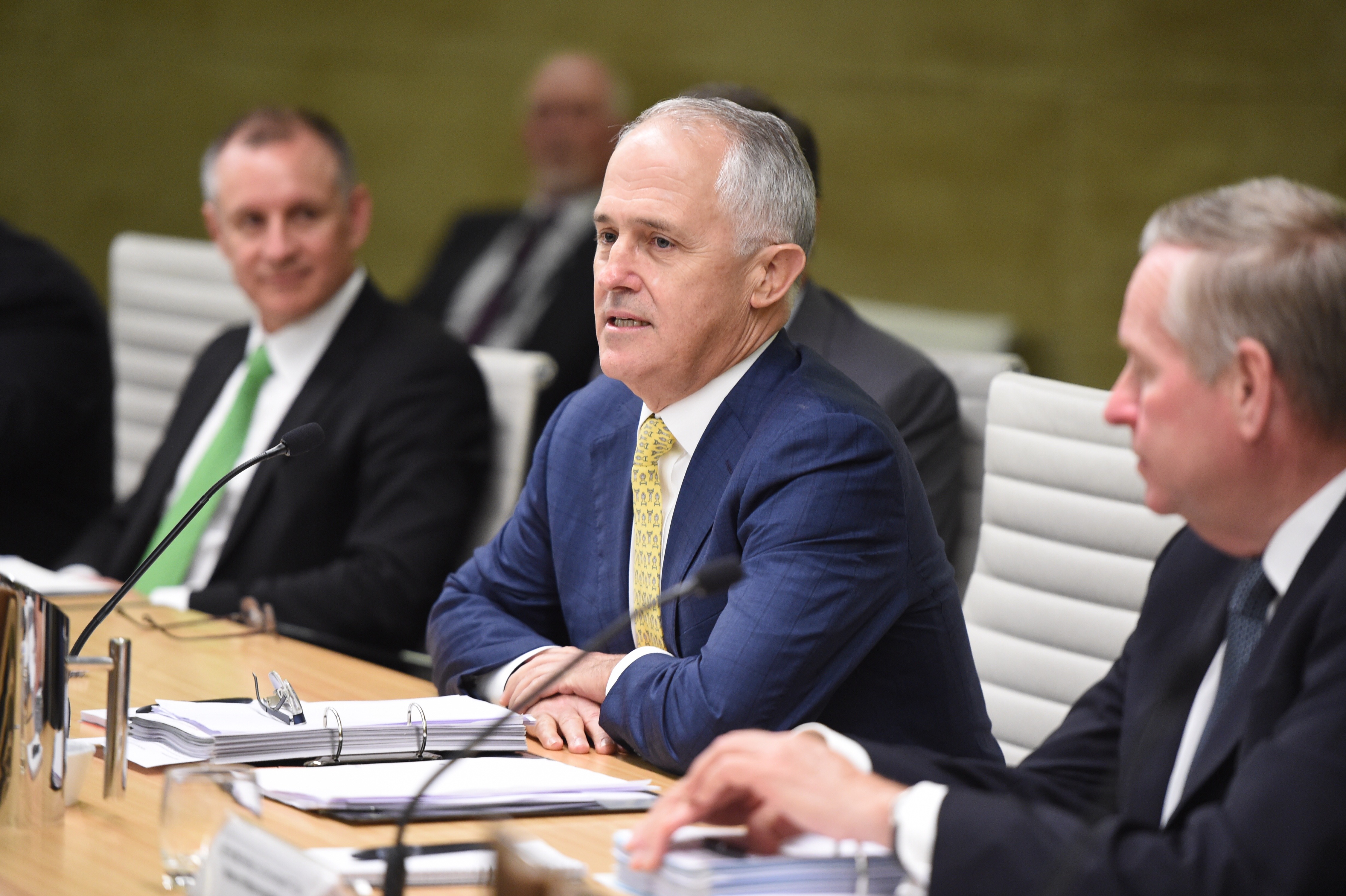 Australia has been long crying out for strong political leadership – of any hue. For leaders not merely with convictions, but with the courage to hold fast to them.

Turnbull has failed on this front, but so did Tony Abbott before him.

The PM is alive today, but his leadership appears terminal, with another challenge seemingly a formality.

There is something of the Hawke-Keating vibe about today’s numbers, and Dutton’s subsequent retreat, while Abbott’s own barracking has gone from whispers to screams.

Turnbull has won, but not convincingly.

The very fact of today’s messy showdown will presage another disastrous poll, and that will in turn become the catalyst, one presumes, for the next challenge – with the challengers deliberately ignorant of the role their own actions have played in destroying the Government’s standing.

The media, by their actions, will silently barrack for chaos rather than calling out the lunacy, because – let’s face it – leadership challenges are by far the most interesting events on which to report in politics.

But whatever happens, the lesson of recent years – and not just for Turnbull – has been a cycle of leadership failure.

Of leaders unable to impose their will on their party, and by extension the electorate, and allowing themselves to sacrifice policy principle for yet another stay of execution.

But that is not consensus – it is capitulation.

And the ultimate sacrifice is of political credibility – a quality it is almost impossible to rebuild.

British left-winger Aneurin Bevan once noted that people who stay in the middle of the road get run down by both sides.

It’s hard to conceive of the narrow political bent thus far demonstrated by Peter Dutton garnering broad mainstream support, but at this juncture the mere novelty of a leader who appears authentic and brave would doubtless hold some appeal.

As for Turnbull, he may allow himself a belated, wry reflection that if he’d followed Weatherill’s template and put his leadership on the line back when he still looked like a leader, his Prime Ministership may have been very different.