We know that at least three people died by apparent suicide after treatment there, that the facility enabled suicide attempts by its physical design and that mental health patients were put at risk by being discharged from it without follow-up.

And SA Health was repeatedly warned over two-and-a-half years that it was unsafe and unfit for purpose – by the unit’s staff, by the Community Visitor Scheme and by the doctors’ and nurses’ unions.

Now, the department is refusing to answer a series of key questions about the facility.

These questions go to whether South Australians can be confident their loved ones are safe in this state’s public health facilities.

Warned repeatedly of its dangers, why did it take SA Health so long to close the unit?

When SA Health shut the Lyell McEwin Hospital mental health short stay unit in December last year, it claimed the decision was made because “we take the concerns from Safework SA and SASMOA (the doctors’ union) seriously”.

But SASMOA had expressed concerns about the safety of the unit as early as mid-2015.

The union wrote to then-CEO of the Northern Adelaide Local Health Network Jackie Hanson, warning that the unit was unsafe, operating over-capacity and “not built for mental health purpose”.

Hanson, who left the position this year to take up a new role in Queensland, responded a few days later, saying she was committed to seeking “a new home for the mental health short stay unit”.

To this day, a replacement unit hasn’t progressed beyond the planning stage.

As InDaily has revealed over the past week, we now know what happened in the intervening period: a series of incidents and warnings, with action finally taken in December last year – more than two years after the alarm was first raised.

Why does this delay matter?

An email from the SA Branch of the Australian Nursing and Midwifery Federation to SA Health, dated February 2017, seeks “reduction of risk associated with a large number of ligature points (features of a room that can facilitate suicide)”.

It says nurses had seen no action to reduce the number of ligature points at the unit and were unable to mitigate the risk.

The email also noted that the cramped, noisy unit, because of its co-location with a surgical ward, “will only have negative impacts on patients who have limited thresholds of these environments due to mental illness”.

The SASMOA report says that SA Health had conducted a “ligature review” since receiving the ANMF email.

Regardless, nearly a year after nurses warned about ligature points and despite recorded suicide attempts during the previous year in the facility, the December 2017 report notes:

Despite this, SA Health won’t explain why they didn’t close the unit sooner. They simply tell us: “All Local Health Networks undertake regular ligature audits of their mental health facilities at least once a year”.

The statutory office charged with inspecting mental health facilities, the Community Visitor Scheme, also sounded a warning on the unit, producing a series of reports on the state of the facility in 2016 and 2017.

A summary of those reports shows:

According to Principal Community Visitor Maurice Corcoran, these reports were routinely sent to SA Health.

A department spokesperson told us last week that “every recommendation (from the reports) is formally assessed and quality improvement strategies are considered for implementation”.

What SA Health actually did in response to warnings, made again and again, about the same safety issues at the same unit, remains unclear.

But the drastic step of closing the facility immediately following the December 2017 SASMOA report is an indictment on SA Health’s responses – whatever they were – to all of the previous warnings.

Who knew, and who was responsible?

SA Health has declined to say who, in senior positions, knew about these issues and what they did about them.

Did the same structures that failed to stop the horrors of Oakden also fail the patients at the Lyell McEwin Hospital?

The short stay unit was managed by the mental health arm of the Northern Adelaide Local Health Network.

Independent Commissioner Against Corruption Bruce Lander found the network had engaged in maladministration in its management of Oakden, but exonerated its former CEO Hanson.

And there are disturbing echoes of Oakden in the case of the short stay unit.

They include repeated warnings from about the inadequacy of the facility and the fact that it had somehow achieved full accreditation from external bodies at the time SA Health deemed to close it over obvious safety concerns.

Another is the apparent lack of adequate staffing at the unit and a refusal on the part of SA Health to acknowledge it.

But a key difference is that staff employed within the Lyell McEwen unit had repeatedly sounded clear warnings about its safety – and there is no evidence of its staff mistreating patients.

Can we believe SA Health’s claim that the unit was adequately staffed at all times?

“The unit maintained an appropriate patient-to-staff ratio that included a social worker, psychologist and nurses at all times,” SA Health claimed last week.

There is good reason to doubt this claim.

A summary of a March 2017 Community Visitor Scheme report reads: “Lack of staff is also an issue which compromised the quality of care due to the conditions of a hectic environment that demands extra supervision of consumers and high turnover of clients … there is not a permanent social worker.”

The ANMF email, from February 2017, says that there had been “no backfill of the social work position … completion of tasks (has) also impacted frequency of casual or backfill staff who may not be skilled, or understand the social work role.”

The 2015 SASMOA correspondence to NALHN says: “Given the inappropriateness of the ward and current nurse staffing issues, the (unit), from a clinical, professional and safety opinion can only accommodate a maximum of six (patients)”, noting that there were sometimes eight patients being treated.

Most of these reports record a lack of available social workers.

The damning Oakden Review, penned by former Chief Psychiatrist Aaron Groves, said the facility was up to 44 staff short in January 2017 by national standards, and at least 10.5 full-time equivalent staff short at its then-occupancy level. SA Health later claimed that staffing levels were adequate.

How does SA Health justify secrecy on matters of public interest?

The Lyell McEwin Hospital has a poor record when it comes to the safe discharge of mental health patients.

In 2016, Deputy State Coroner Anthony Schapel found that 43-year-old Geoffrey Noakes, who took his own life less than two hours after being discharged from the Lyell McEwin Hospital in February 2013, should not have been allowed to leave.

Schapel found his death might have been prevented if Noakes had been held at the hospital under an inpatient treatment order, rather than released.

Also in 2016, State Coroner Mark Johns found it was “completely unacceptable” that neither Jeremy Williams, 24, nor Robert Campbell, 53, were assessed by a psychiatric medical officer when they entered the hospital on separate occasions in early 2012.

Both men died by suicide within days of release from the hospital.

As InDaily reported last week, at least two mental health patients were discharged from the unit with no follow-up – one at high risk of suicide at the time.

A further three people died of apparent suicide after being discharged from the facility between 2015 and 2017.

But SA Health has refused to disclose how long it was, after being discharged, that the patients died.

Patient confidentiality is an essential value of our health system.

But it’s also a convenient excuse for secrecy on issues of legitimate public interest.

Given the history and the pressing public need for accountability over the performance of state-run health facilities, the secrecy, in this case, seems totally unjustifiable.

The excuse given for the secrecy makes it more so: “We are unable to comment on the circumstances relating to cases before the Coroner, but will assist the Coroner as required,” the department told us last week.

The coroner’s inquests into the deaths of Noakes, Williams and Campbell each specified the date and time of death.

The Coroner, Mark Johns, told InDaily he had no way of knowing how long after leaving the unit the patients died without more information about the deaths from the department.

He said SA Health “often” does “not see it as (its) task to be open in the provision of information that my office needs”.

The families of people experiencing mental illness must be able to have confidence that their loved ones will be safe in public treatment facilities.

The risk of not attending hospital in an emergency is, of course, far higher than attending. 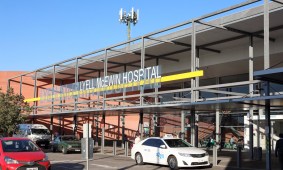 But if a state-run health unit failed to protect those in its care, South Australians deserve to know about it, so that those responsible can be held accountable and we can prevent it happening again.

SA Health needs to remove the veil of secrecy.

It has a lot of explaining to do.

Bension Siebert is a reporter with InDaily.