There is no doubt that after 20 years in SA politics Nick Xenophon had attracted a considerable following. In the 2013 Senate election, Xenophon received 25 per cent of votes, coming second to the Liberals and beating Labor into third place. In the 2016 double dissolution election, the Nick Xenophon Team won 22 per cent of votes, slightly down on the previous result but by any standard still a most impressive political achievement.

The Advertiser reported a Galaxy poll, commissioned in early October 2017 by the Australian Bankers’ Association, indicating SA Best’s state-wide vote was 26 per cent, with Labor on 27 per cent and the Liberals at 31 per cent. On the cusp of Christmas, Newspoll reported SA Best leading the majors with a primary vote of 32 per cent and, remarkably, Xenophon comfortably leading Weatherill and Marshall on the “better premier” measure.

The sharp uptick in SA Best support was surprising but very encouraging for Xenophon who had expected a contrary movement in the polls as a consequence of his difficulties over the previous three months.

At this point, two things happened that I believe are the root cause of SA Best’s failure to win a seat. Xenophon for the first time opened speculation that he may insist on being Premier should SA Best hold the balance of power. While he repeatedly and correctly insisted that such an outcome was nothing more than a “mathematical hypothetical”, he allowed his party to be seen as an alternative government – and at this time he began to accept invitations to attend three-way debates with the Premier and Opposition Leader that were being scheduled to take place in the formal election campaign period.

And he opened the floodgates to accepting new candidates without reference to the sub-branches.

READ PART ONE – Why the SA Best bubble burst: a quasi-insider’s account

Encouraged by the electoral picture Newspoll painted, SA Best was inundated with applications from hopeful candidates. Jettisoning the careful vetting that informed the first dozen candidates’ selection it became increasingly a matter, after consideration of an applicant’s CV, of a “captain’s pick”.

Although some of Xenophon’s confidants counselled caution, Xenophon was determined to increase the number of candidates. In part, this was to counter Liberal criticism that SA Best was disproportionately focused on Liberal-held seats. Xenophon’s commitment to field approximately equal numbers of candidates in Liberal and Labor seats boosted the numbers, as did an apparent belief that running candidates in seats held by the Premier, the Opposition Leader and selected frontbenchers of both parties would distract them from pouring in resources to defeat Xenophon in Hartley.

Any counsel that this would only stretch SA Best’s limited resources did not gain any traction. Perplexed, I witnessed some of this first-hand but, in the heady days before February dawned, I basically reached a conclusion along the lines of “what would an academic really know about practical electoral matters”. At the time these decisions were made, however, SA Best appeared to be surfing a wave a support and optimism was high.

Xenophon’s own expectations plummeted, and he trooped through the four weeks of the formal election campaign confident in his expectation that he would be beaten in Hartley, and probably beaten badly…

Early January confirmed SA Best’s momentum with a private poll commissioned by a prominent West Australian businessman showing that in Hurtle Vale, Mawson and Hartley, SA Best was headed for victory. The result of this reputable Galaxy Poll conducted on January 8 and 9 showed my wife Hazel Wainwright was on a 38 per cent primary vote in Mawson, with Nick Xenophon on 37 per cent in Hartley and Michael O’Brien polling 33 per cent in Hurtle Vale.

Was I sufficiently skeptical of that poll? Not really, as it accorded with what Newspoll presented a few weeks earlier and a Morgan Poll conducted on January 11-12 that showed SA Best with the state-wide support of 28.5 per cent, behind the Liberals on 32 per cent but ahead of Labor on 23.5 per cent.

As a consequence, SA Best was buoyed with anticipation and perhaps, at this point, some hubris may have crept into the leader’s judgement as more and more candidates were announced.

Vetting appears to have been minimal, more often than not limited to hastily arranged telephone conversations and meetings with Xenophon. Recruiting and announcing candidates appeared to be both a major preoccupation for Xenophon and a substitute for doing the hard yards of policy work and on-the-ground campaigning in Hartley. In the mix here was also an “insurance policy” dimension: more candidates would secure more public funding and this would address Xenophon’s concern about the bank loan he’d taken out to fund much of the campaign.

I wrote at the time that the growing parade of candidates seriously contradicted the original campaign narrative. As it happens most of the SA Best candidates managed to at least keep out of trouble, but they were largely unknown and had far too little time to campaign beyond putting up corflutes. More importantly, the selection of a large number of candidates reinforced uncertainty about what Xenophon was aiming for and ultimately what his party stood for.

One thing is clear: the bubble of SA Best support burst, and burst very quickly, some six weeks before the election.

My journal records on February 1 a phone call, another unforgettable one. “A rather flummoxed Nick X is on the line the latest poll in hand. SA Best’s state wide vote had collapsed to 17 per cent! He asks, ‘How do you explain that Haydon?’”

I recall saying something like, “If I was doing commentary I’d be saying ‘Xenophon has scared the horses. He promised a modest number of candidates and it now looks like he wants to become the government, and the conclusion for voters is that Nick is just not ready, he’s ahead of himself… and who are all these candidates?’”

A fortnight later I was informed of internal SA Best polling that affirmed that poll and showed the leader unlikely to win Hartley with Labor’s Grace Portelesi line ball with the incumbent Liberal Vincent Tarzia. Xenophon was coming a poor third.

Within those first two weeks of February, Xenophon’s own expectations plummeted, and he trooped through the four weeks of the formal election campaign confident in his expectation that he would be beaten in Hartley, and probably beaten badly, though he retained some hope that his candidates could still be in with a chance to pick up a handful of seats. Xenophon himself put in a minimalist effort on the ground in Hartley, apparently thinking his energies were more usefully spent elsewhere.

… he deliberately chose a high-risk approach that has brought his political career, and his party, crashing down.

It is important to note that the dramatic downturn in the polls came before the Australian Hotels Association campaign cranked up, before Xenophon’s February 19 gaffe on the size of the health budget and before the frivolous Bollywood campaign video. But, notably, it was after the major parties had started to turn their guns on SA Best. That factor and the loss of campaign narrative, I conclude, are the main reasons for the ultimate squandering of a remarkable electoral lead.

To my surprise, at no stage did SA Best campaign HQ present candidates with a leaflet, cleverly crafting a negative pitch – a reminder to voters why they did not trust the majors. Rather, we observed the constant Labor and Liberal attack on Xenophon, especially the Liberals. Then, late in the campaign, the major parties’ odious, but effective, robocalls started to flood out.

Due to the absence of an experienced campaign director, SA Best simply deserted the battlefield, unwilling to engage using basic modern campaign tactics but forever keen to pump out more policy announcements.

Once again negative messaging was the winner late in a campaign when the uninterested and disengaged voters’ attention needs to be arrested.

I urged Xenophon in December to plan a negative campaign for at least the final two weeks. I was not alone in this. Two of Nick’s closest political confidants, both outside the formal campaign team, similarly argued that he needed to deliver a clear message that attacked Labor and Liberal, but it appears his personality, and other NXT personnel, are simply not geared to entertain such odium.

Nevertheless, the lesson for any party in the future seeking to challenge the duopoly is that all aspects of the modern election campaign need to be employed. Alas, the darker arts of a Machiavellian world are required.

The final ‘No Bull’ television advertisement came much too late and failed to deliver the reminder to voters why so many tended not to trust the major parties and ranked Marshall and Weatherill so lowly in those end of year polls. Rather, this advert painted Nick as the victim of unfair play and people were weary of that message.

It is tempting to wonder what might have been. SA Best’s final Legislative Council vote was approximately 19.3 per cent, down from the highpoints of the 2013 and 2016 Senate elections, but still a very creditable result. Had Xenophon run for the Legislative Council, together with a disciplined and targeted lower house campaign focussed on a handful of seats, it is quite possible that SA Best might have picked up three seats in the upper house and maybe two or three seats in the lower house. If that were the case Xenophon would indeed have been the kingmaker in the new parliament, as was his original objective. Instead, he deliberately chose a high-risk approach that has brought his political career, and his party, crashing down.

In announcing his candidacy, Xenophon declared it to be a “do or die” effort. Ultimately, notwithstanding his great talents as a “sole trader” in politics and, arguably, because of his long success in that role, he lacked the requisite strategic, organisational and leadership skills to give himself a real chance of achieving more ambitious objectives. 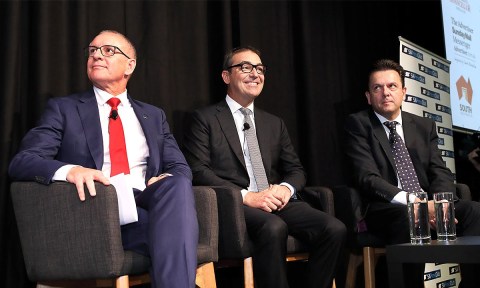 The party leaders during the campaign. Manning says the election has entrenched the political duopoly. Photo: Tony Lewis/InDaily

In conclusion, election 2018 is a victory for both the Liberal and Labor parties.

SA Best is vanquished and unlikely to survive and that has ramifications for Rebekha Sharkie’s defence of the federal seat of Mayo. The Greens and the Australian Conservatives took a blow and, in the absence of a strong Senate candidate at next year’s national election, the Greens are in danger of losing further ground.

As a consequence, the duopoly parties are actually in a stronger position now than they have been for the past three decades, notwithstanding a record low combined primary vote.

In some seats sitting Labor MPs managed solid favourable swings. From conversations I’ve had, it is clear that the newly minted Opposition are rather chipper about their chances in March 2022.

South Australians voted for something democracy requires from time to time – a change of government and a shake-up of the bureaucracy.

Steven Marshall has the opportunity to shine as first-term Premiers so often do and, I suspect, an improving SA economy will help that cause.

Finally, and thankfully, no one is crying foul about electoral boundaries.

Haydon Manning teaches politics in the College of Business, Government and Law at Flinders University. As noted above, his wife, Hazel Wainwright, was SA Best’s candidate for Mawson.