Post-Oakden, the campaign appears to have sunk into something of a lull. Rather than try and wrest back the agenda, Labor notably took a day or two to allow the dust to settle, and then seized doggedly onto the first half-issue to divert the media’s collective attention, refusing to let slide the cryptic suggestion the Libs had been gifted a $1.2 million donation from idiosyncratic businesswoman Sally Zou.

That suggestion, of course, was made by Zou herself, in a strange and since deleted tweet that included a screenshot of a cheque made out to the state party accompanied by what appeared to be a few stanzas from a long-lost Allen Ginsberg poem: “This is a life-journey wandering the Man, who is met a beautiful accident … Perhaps is casual transmigration, and this was born, wish you LIBERALS had enough”. 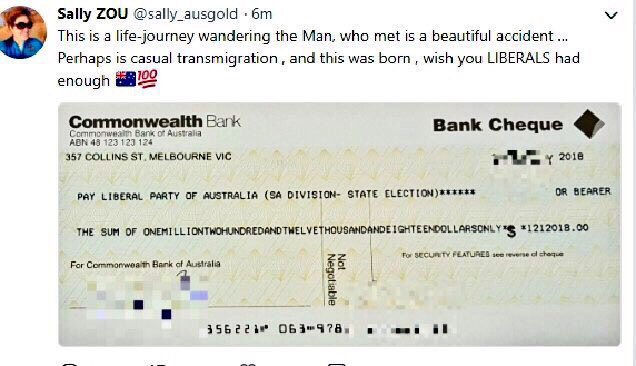 While the Libs would no doubt very much like another $1.2 million in their coffers, the irony is that the gesture (assuming it ever eventuates) could end up a net negative for their campaign, as Labor hammers the Chinese donor angle with all the subtlety it displayed in its Elder campaign four years ago.

It’s a sad indictment on our political and media landscape that the issue of an intriguing yet entirely legal political donation has already had a campaign lifespan longer than the fallout of last week’s scathing ICAC report into the Oakden scandal.

Of course, the initial uproar over Oakden was always going to dissipate at some point – the nature of political campaigns tends to ensure the political agenda never stands still for too long. Like a hungry shark, the media pack quickly consumes one course and just as quickly moves on to the next.

And yet oddly, neither major party has made much of an effort to capture the policy agenda this week – no doubt keenly aware that voters may not tune in to a political campaign en masse until its dying days.

Labor is very much positioning itself in the Whitney Houston camp of believing the children are our future, with a series of announcements focussed on early years health and learning. These included free meningococcal B vaccines for kids aged two and under, free flu vaccines for under 5s, 10 new children centres and 20 new Nature Play areas – presumably for the little scamps to work off all the Violet Crumbles they’re going to consume after Weatherill’s breathless promotion.

As far as Labor’s electoral hopes are concerned the party has taken a leaf out of environmental activist Jack Weinberg’s “don’t trust anyone over 30” book (Weinberg, incidentally, will turn 78 next month), with at least one candidate apparently taking the mantra to heart.

Matthew Loader, Labor candidate for Dunstan, just told a packed town hall residents’ meeting that if they were over 30, they were not part of the future. And promptly lost the election. #saparli #auspol #adelaide #Election2018 #norwood

Sorry I paraphrased you. The quote was: "You're not part of the future."

But the week has since taken on a ‘business-as-usual’ feel, with the Government happy to re-heat existing health infrastructure projects and the Opposition again piggy-backing on defence announcements by Marshall’s federal Liberal colleagues.

In many ways, the irony of Nick Xenophon’s hijack of the political agenda is that it’s actually taken a fair bit of attention and heat off the major parties. In years gone by, a few days of inactivity mid-campaign would attract some justified scrutiny; these days, hardly anyone notices.

Yesterday, Marshall’s entire media set-piece contained no policy element whatsoever, merely a photo-op at a polling station where he was casting his ballot (presumably for himself) almost two weeks out from polling day.

The old election maxim is “vote early and vote often”, of which the Libs have – rather wisely – borrowed the less contentious portion

While Marshall was careful to emphasise that people should “make their own decisions” about when they vote – and the electoral laws require a legitimate reason for doing so before the March 17 polling day – the unusual sight of a major party leader doing the traditional election day set-piece 11 days early sends a powerful signal.

And it’s a signal the Libs are hammering, with their voteearly.com.au website already provoking a statement from the Electoral Commission distancing itself from the material and warning voters to “exercise extreme caution” with their personal information.

The old election maxim popularised by Chicago gangster Al Capone was “vote early and vote often”, of which the Libs have – rather wisely – borrowed the less contentious portion.

Of course, it’s not hard to see why they want to encourage people to get out and cast their vote asap.

The Opposition clearly believes voter disenchantment with Labor is at a high ebb – particularly after Oakden.

If the ICAC report is already a fading memory for many voters otherwise diverted by Mad March and bewildered by the daily distractions of a three-pronged election race, by March 17 for many it could be long forgotten.

The Libs no doubt calculate that people voting now will, on balance, vote for a change of Government.

And that may well happen.

But don’t count on finding out about it anytime soon.

Because here’s the rub.

They won’t be counted on the Sunday after the election.

Counting of some, in perhaps the most marginal seats, won’t commence until the Monday, with many more not starting until the day after that.

And, of course, in this most bizarre of elections, who is to say which are the most marginal seats? The likes of Adelaide, Newland, King and Hurtle Vale may be the closest contests on paper, but it’s the seats with higher margins – the likes of Heysen, Morialta, Taylor and Port Adelaide – where the influence of SA Best may be most keenly felt, and which could present a more intriguing narrative in the final count.

Those are the sort of seats where the result will very much depend on which party edges its way into second place on primaries – and where the flow of preferences will be both decisive and intently scrutineered.

So in truth, the more pre-poll votes there are this election – and there are already around 16,000 of them in the can, according to the Electoral Commission – the longer we have to wait to get even the vaguest idea of a result.

And even then, the final throw of preferences won’t be done for another eight days after the election – on Sunday March 25.

That, then, is the date on which we will definitively learn the make-up of the state’s House of Assembly.

And, given the three-cornered contest, the likelihood of a gaggle of independents and the state’s recent history of hung parliaments (no-one has managed to achieve an outright majority in three of the past five elections) there’s every chance that March 25 will not mark the end of this Unwinnable Election, but merely signal the start of a round of fevered negotiations to decide who governs – if indeed, anyone can.

So, by all means, vote early – if you’re otherwise disposed on polling day and enjoy waiting in queues.

Just don’t think that by doing so you’re getting this election out of the way. Because you’re actually helping ensure it’s as painfully drawn out as possible.